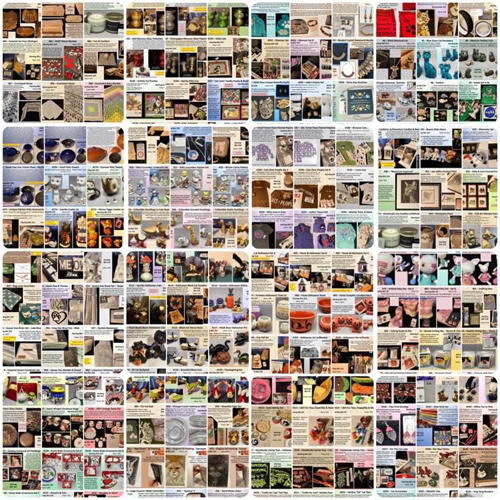 With a total of 250 (!) bid sets, a LOT of really cool stuff, the online auction starts on Saturday September 24th at 9 am (Central time) and goes through Saturday October 1st at 7 pm (Central time). Go follow the auction page on Facebook so you don’t miss out!

So in case you missed it, Kim came through her spay surgery fine. When I got home with her, she rejected the idea of recovering quietly in my room, and instead YOWLED at the door until I put her in the foster room. Whereupon she walked silently out of the carrier and hid under the blanket hanging down from the couch. She was so quiet that it took her kittens (who were napping) a couple of hours to even realize she was in the room. By Saturday morning she was ready to eat and was moving around the room well (and even insisted that the kittens nurse). She’s not 100% yet, but that’s a big surgery for an older cat, so it’ll take longer for her to recover than it takes kittens. 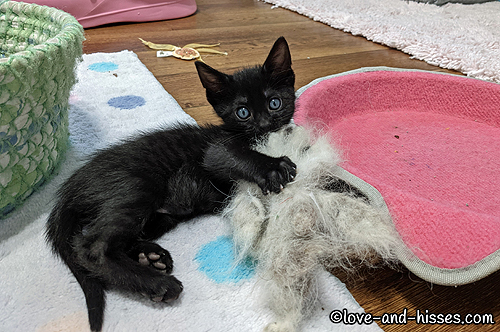 Gus playing with a big ol’ wad of dog fur. (When we lived on 4 1/2 acres, we had two Great Pyrenees dogs – George and Gracie – who guarded our chickens from predators, songbirds, and hot air balloons. They would shed like crazy in the spring, and I’d gather up the loose fur after Fred brushed them, and basically run it through the washer (in a lingerie bag) a bunch of times until the fur felted together in big wads. The kittens find the fur fascinating and fun to play with.) 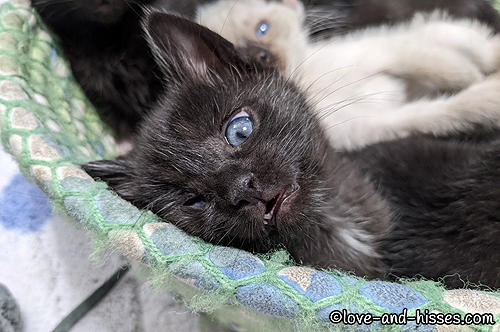 Mike shows off his teefs. 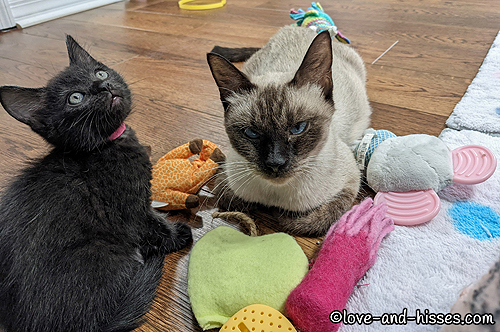 A Francesca and her mama. (Frannie’s all “Where DID that milk bar go?!”) 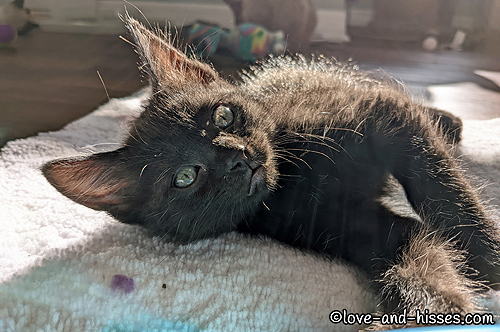 Francesca in the sun. 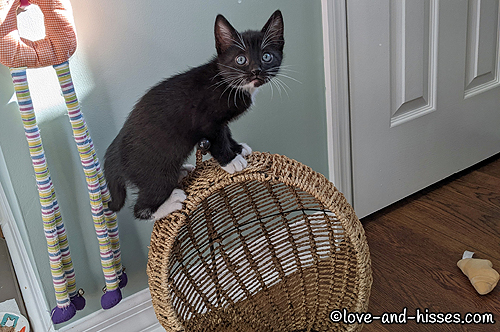 Nacho does some balancing atop the Fruittasan. 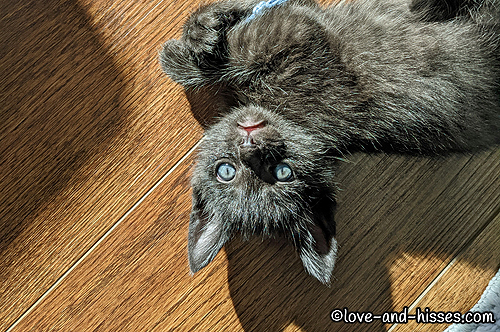 Mike in the sun. 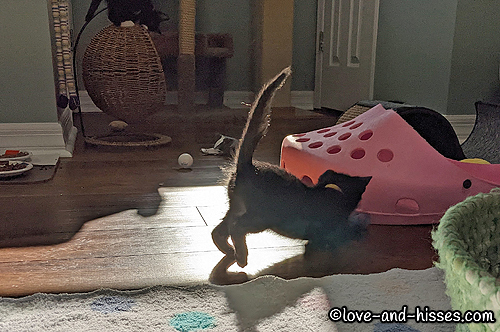 Gus in motion. His tail is getting LONG! 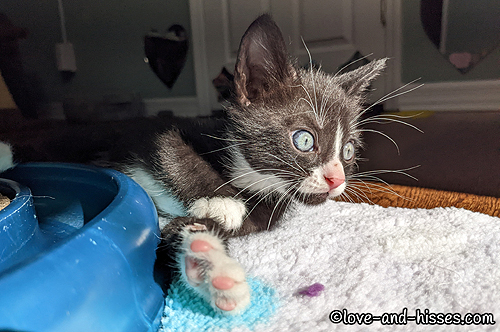 Saul in the sun, watching the action. 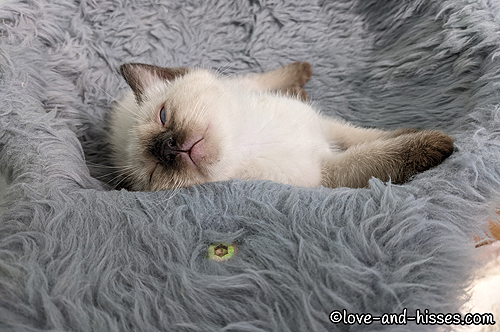 Lalo has a snooze. 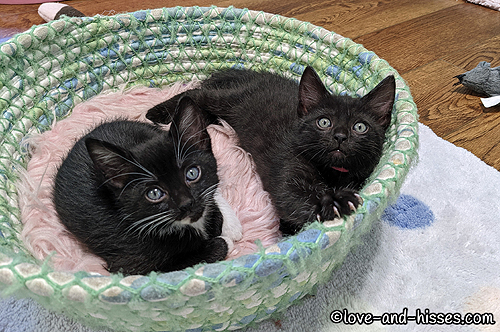 Nacho and Francesca have some girl time in the basket. 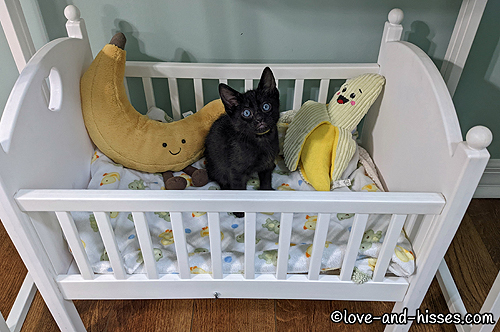 Gus in the crib, wondering what he’s done. (He climbed in there himself… and eventually climbed back out, too.) 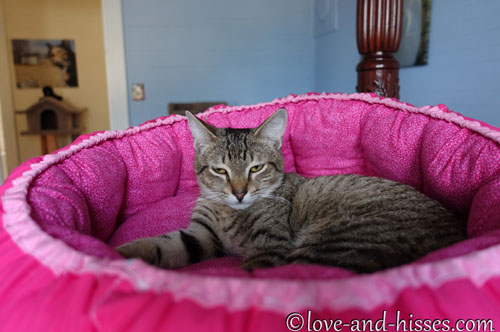 An old shot of Dewey in his favorite pink bed. (He still occasionally sleeps in that bed!) 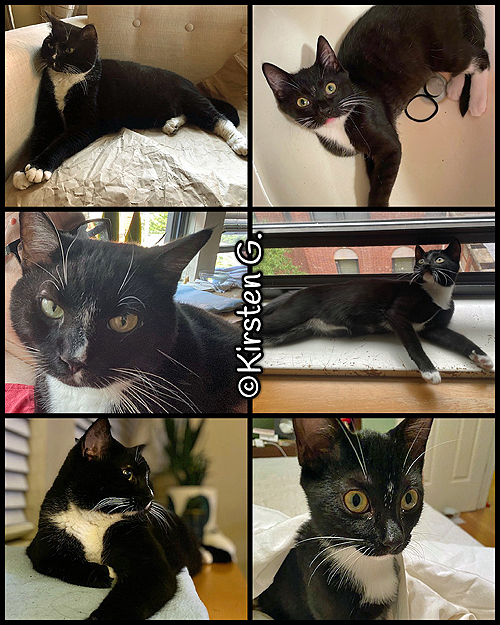 On the left, we have Norbie – Norbert – who was our foster in 2013. Norbert was orphaned the day of his birth (he lost his mother and siblings in a terrible accident), and needed a mama. At the time we got the call, foster Khaleesi was literally birthing kittens. We got Norbie, wiped him down with some soiled bedding from the birthing crate, and slid him in among her other kittens. Khaleesi was a bit puzzled from time to time, but accepted him as her own and was a wonderful mother to him alongside her own 4 kittens. On the right, we have Norbie’s new-ish little sister Whirli.⁠

Kirsten says: “I’m feeling so nostalgic right now because Whirli (for whirling dervish because this kitten is ACTIVE!) is basically the same size as Norbie when I got him 9!! years ago this month. And of course, she’s his doppelgänger too.⁠

Norbie is still a handsome boy who loves a good cuddle. He is not super happy with the karma that is a feisty tuxie kitten using him as a jungle gym in his elder years. There aren’t any good pictures of them together, but I keep trying!”⁠

(Thanks, Kirsten… and we look forward to future pics of Norbie & Whirli snuggling!) 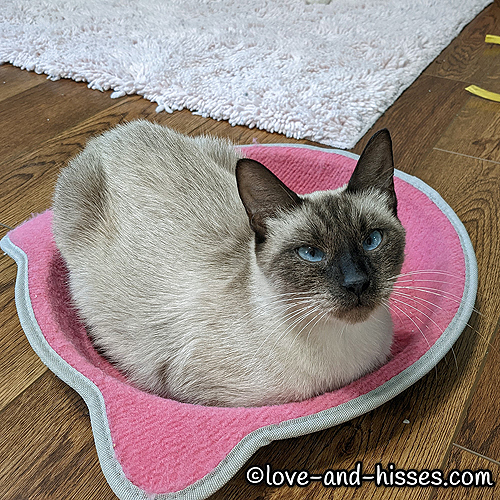 Mama pie! (My favorite!) We are outta here in a few minutes for Kim’s spay surgery. I expect all to go well, and we’ll be back here in a few hours! (I don’t know how on earth we managed to avoid her going into heat, but I am NOT complaining!) 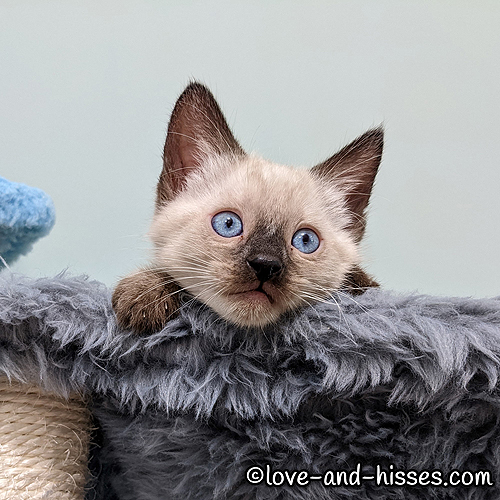 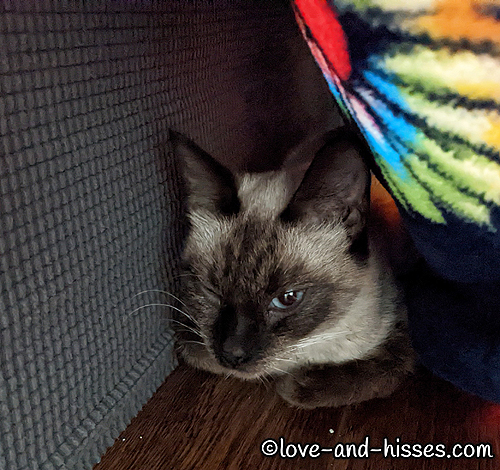 Home again, home again. Kim’s spay surgery went perfectly fine and we’re back home. She did NOT want to relax in comfort in my bedroom, and yowled until I took her into the foster room. She’s hiding under the blanket hanging off the couch, and the kittens don’t even realize she’s there (they were napping). It’ll probably take her a few days to get back to her sweet, cuddly self. 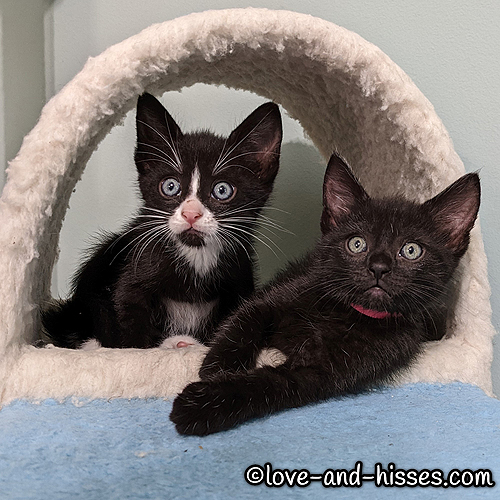 I don’t know what’s going on over there, but it’s certainly got Saul & Francesca’s attention! 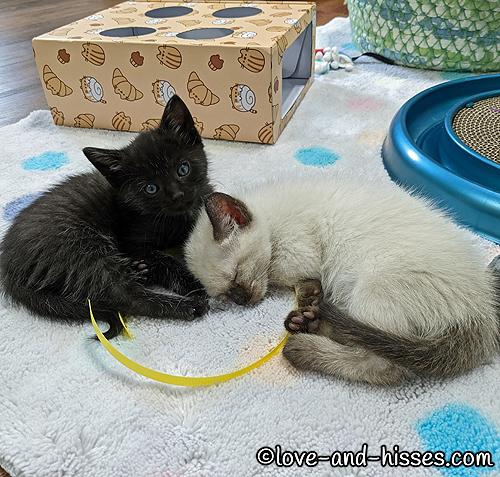 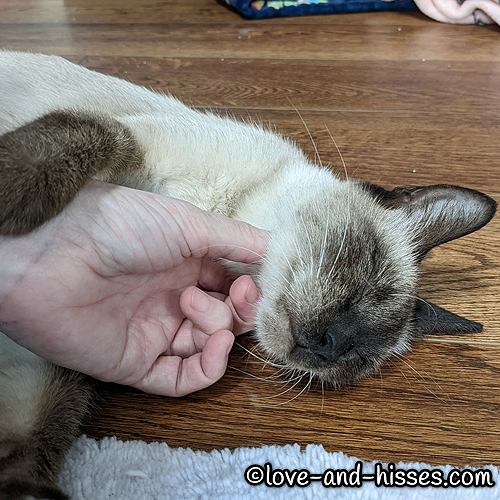 Update on mama Kim (who was spayed yesterday) : She’s doing great! Walking around the room, rubbing on everything, purring up a storm, and flopping over for me to pet her. She’s a happy girl!⁠
⁠
Notes: The vet uses surgical glue for spays, so she has no stitches. I’ve never had an issue with cats or kittens messing with their incisions post-surgery, but am keeping an eye on her. She is still producing milk, and the kittens have already nursed this morning (she woke them up to nurse.) I have no plans to put a weansie on her at this point; I’m going to wait and see how it goes in the next few weeks.

YouTube link
They’re hungry, and not afraid to let me know! 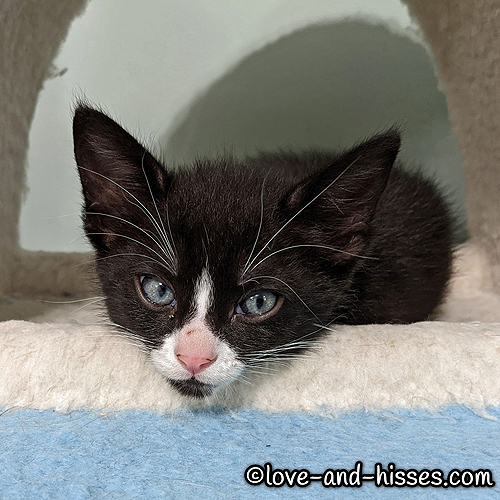 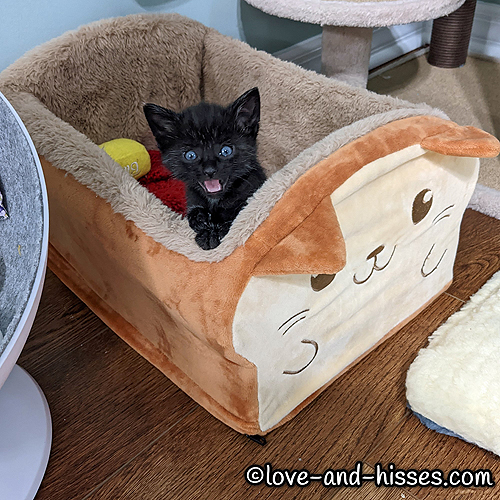 “Not sure what’s going on here, but good morning innernets!” (Mike) 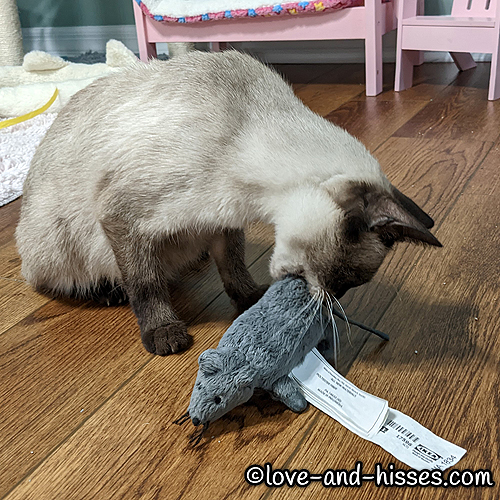 Mama’s back at work hunting and killing rats! 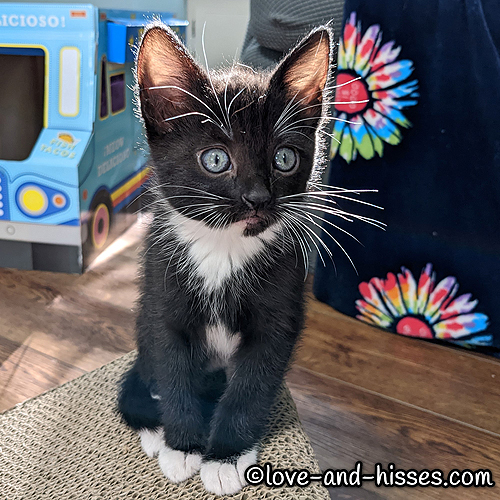 Nacho in the sun. She is SUCH a pretty girl.

YouTube link
A whole lotta Gus – he’s got some MOVES, that boy! 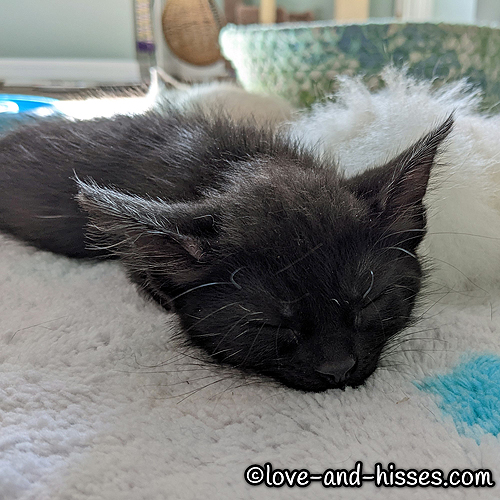