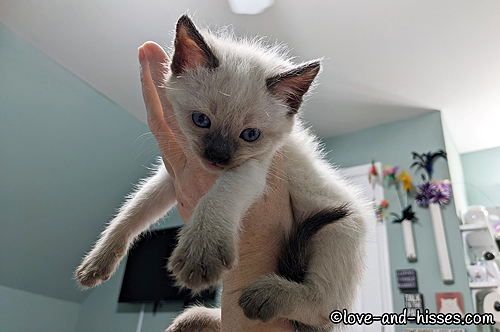 Lalo is such a chill little muffin. 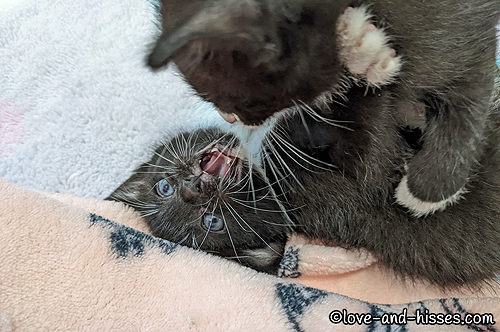 For a kitten who refuses to admit that he’s Da BAYbee, Nacho spends a lot of time complaining that someone’s picking on him (during a fight that he himself started, of course.) 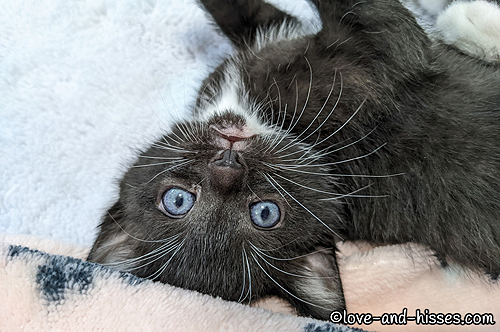 “I just have things to SAY, lady.” 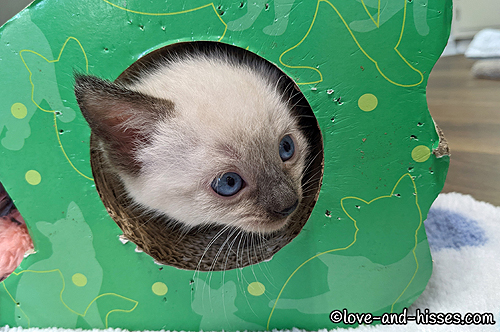 Lalo in the tunnel lookin’ sneaky. 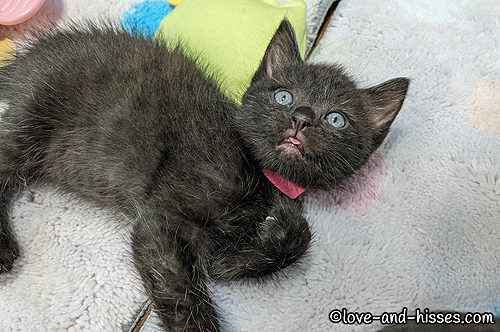 Francesca’s all “Look! Behind you! A serial killer! Or nothing at all! Who knows!” 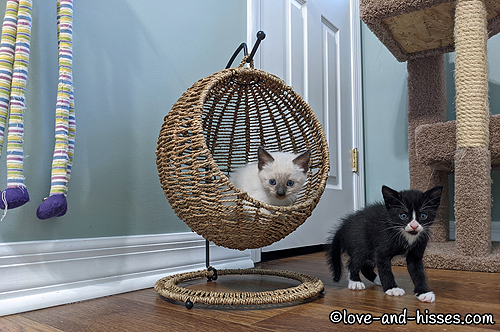 Lalo in the Fruittasan and Saul feelin’ a little floofy. 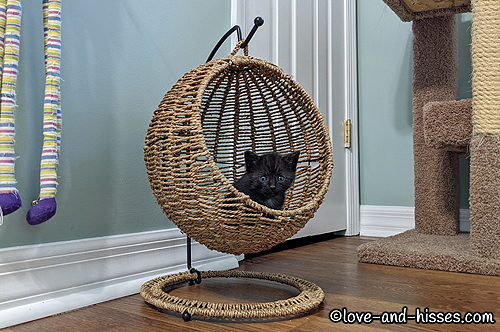 And now Mike’s in the Fruittasan. 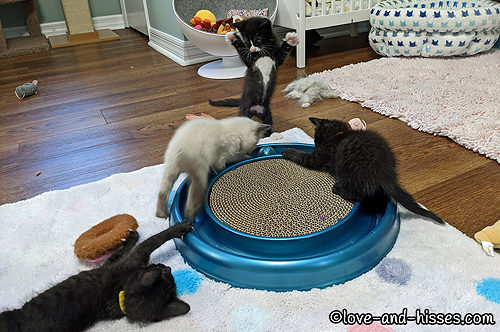 Lalo, Francesca and Gus “discovered” the track toy, and Saul is AMAZED. 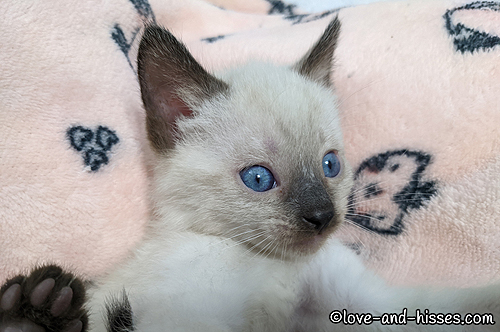 Lalo in my lap, knowing that a million kisses are coming his way. 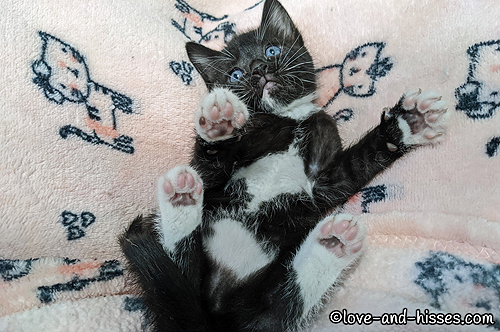 Nacho shows off his multi-colored beans. 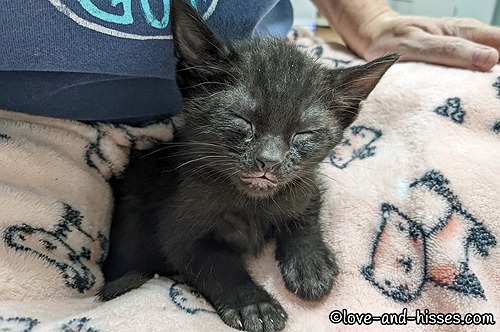 Gus in my lap, sound asleep. 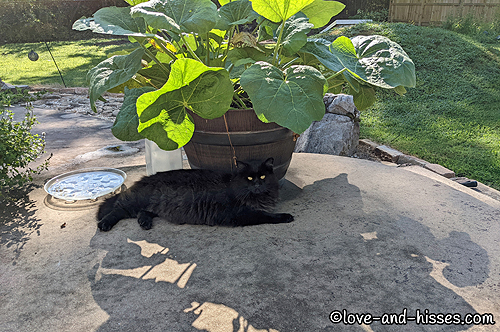 Khal enjoys the shade this pot of Hollyhock leaves provides. I bought a box of Hollyhock roots this spring (and yes, it was 100% because I looked to see what Hollyhocks looked like when I named the kitten, saw how pretty they were, and then saw the box of bare roots for sale at (I think) Sam’s Club and bought them). Naturally I assumed that I’d have a big ol’ pot of Hollyhocks by mid-summer, but they didn’t bloom… and didn’t bloom… and finally when I searched to see what I was doing wrong I found that they’re biennials and won’t bloom until next year (also, I’m probably overwatering them.)

But the cats really like to hang out in the shade provided by the leaves, so WHATEVER. (I am happy to hear any Hollyhock-growing tips you might have.) 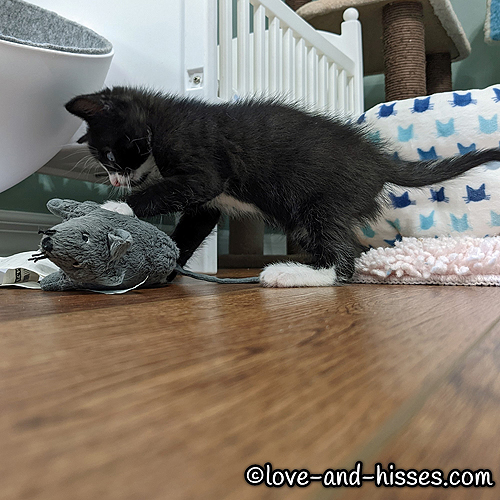 Saul caught an Ikea rattie! And yes, they are rather large (stuffed) rats. (Ikea doesn’t carry them any more, which I think is a travesty. Fortunately I stocked up before they stopped carrying them, though my supply is starting to run low…) 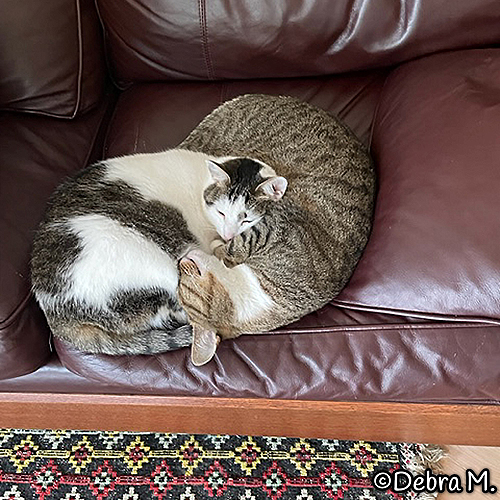 This is how former fosters Phoenix (left, we fostered her in 2017) and Amber (formerly Ambercup, 2015) spend a rainy day. It’s how we should ALL spend our rainy days, if you ask me! (Thanks, Debra!) 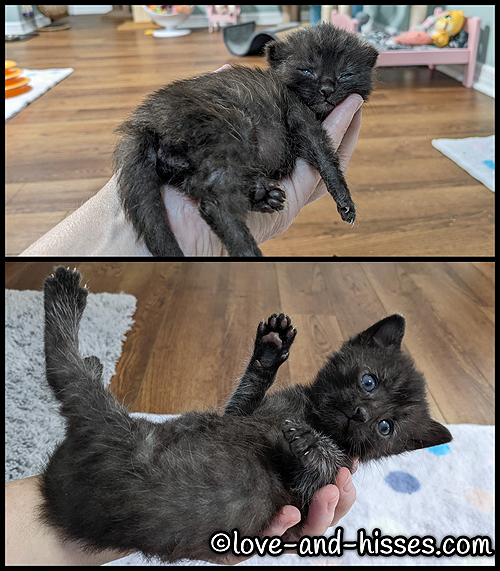 Remember when Mike used to fit perfectly in my hand? Not so much anymore. (Pictures taken just over 2 weeks apart. It’s safe to say that the boy is growing!)

YouTube link
Francesca got up on the couch (she was there when I walked into the room) and then told her mama all about it! 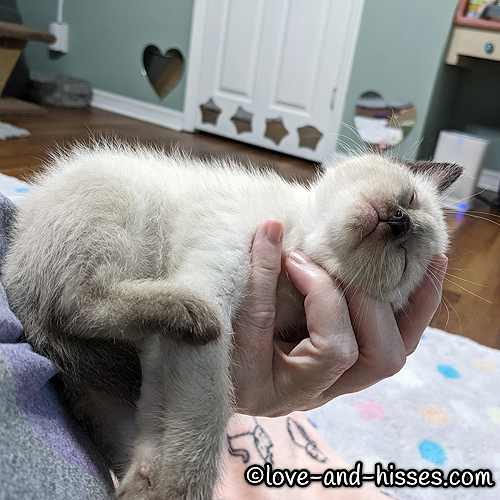 When Lalo is sleepy, he climbs into my lap and up the front of my shirt, so I’ll hold and pet him. Then he kind of flops over into my hand and falls asleep while I hold his upper body in my hand and prop the rest of his body against my front. I wouldn’t say it’s comfortable for me, but of course I sit like this until he decides to wake up and go about his business because I’m not a monster. 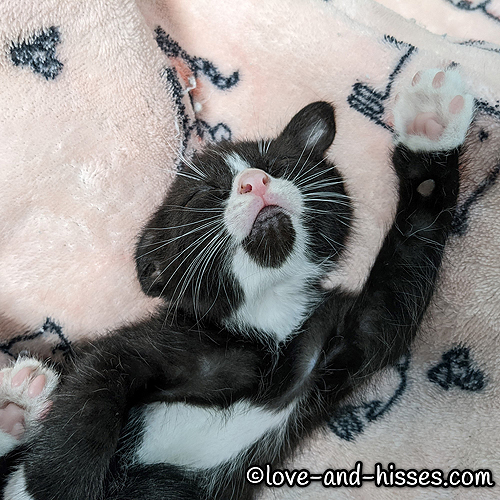