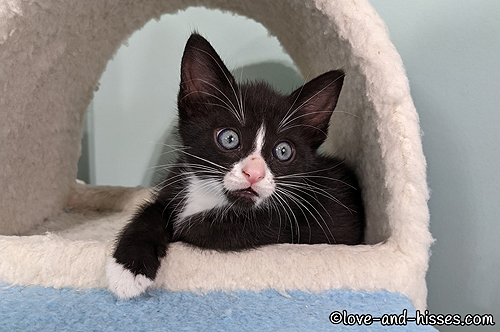 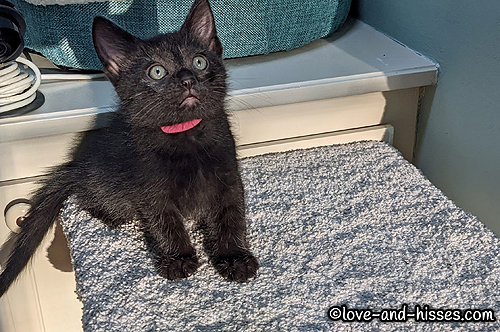 Francesca’s baffled by the sunshine. 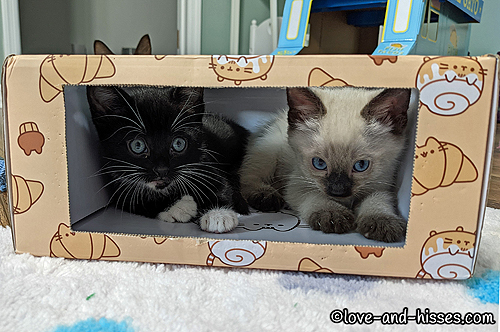 Nacho and Lalo hanging out in the Pusheen Cat Kit box. 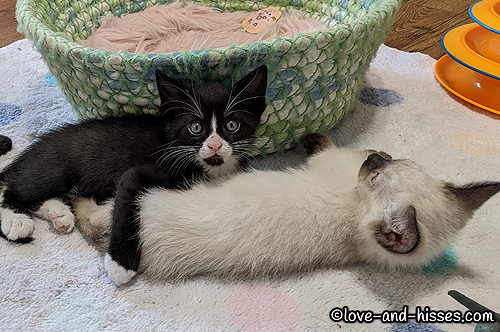 Saul would like you to know that Lalo makes an excellent body pillow. 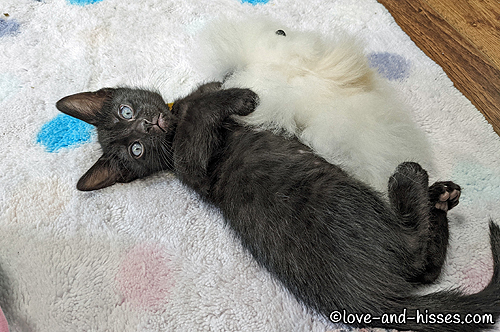 I bought that teddy bear made of alpaca fur (next to Gus; it kind of blends in with the rug) because I thought the kittens would be fascinated. Turns out? Not so much. 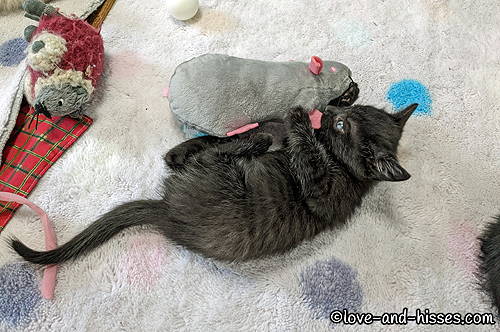 On the other hand, Mike finds this giant rat toy (which came from Amazon, here) a lot of fun! 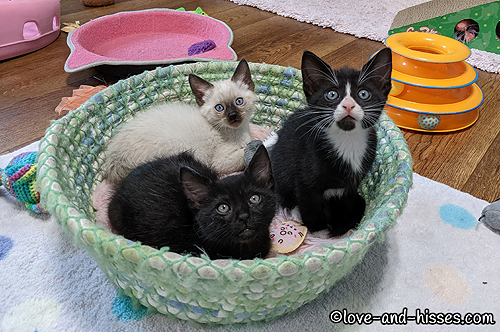 Francesca, Lalo and Saul in the basket, just hangin’ out. 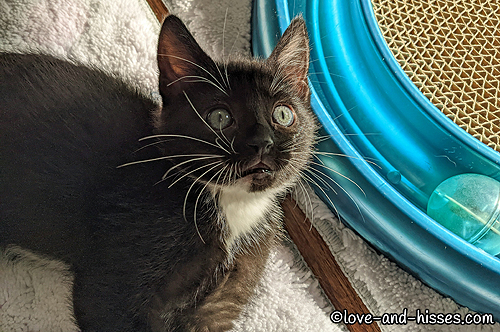 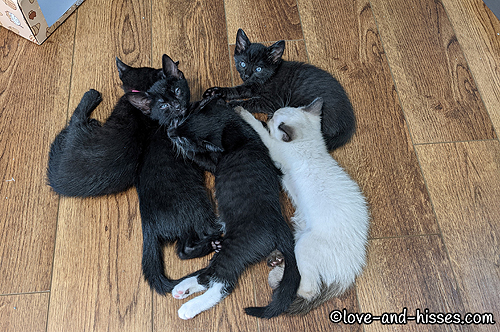 5 of the 6. I think Saul was following Kim around. 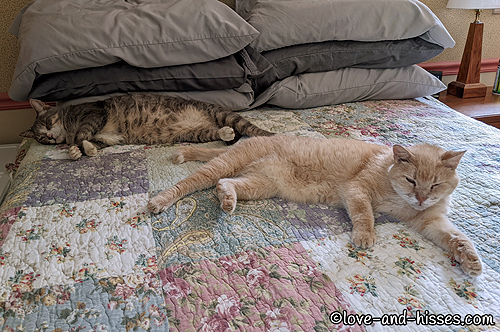 Archie and Newt hang out together on this bed all the time, but it still surprises me when I see it. (Because I think of Archie as disliking other cats, but that’s not really true. He just doesn’t like it if they get up in his space.) 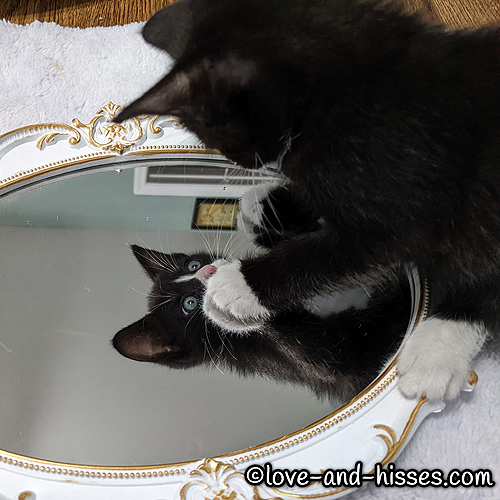 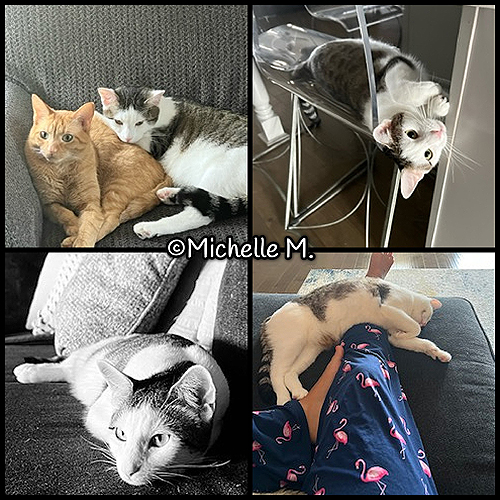 Update! Do you remember Fizzbin, Canasta’s daughter, from early 2021? Well, she’s Betty now, and she’s all grown up! Michelle says: “Betty is the craziest cat i have ever had. She keeps us laughing all the time! Cotton tail and Betty have always been close but lately they have been even more as we lost our older girl, Ali. She passed last week from cancer. These 2 have been cuddling so much. 💕💕 “⁠
⁠
In the lower left (black and white) picture, she looks SO MUCH like her mama, doesn’t she? ⁠
⁠
(Thanks, Michelle!)

YouTube link
Mama’s hard at work in the taco truck while her kittens are off playing. Not helpful, kittens! Get to work! 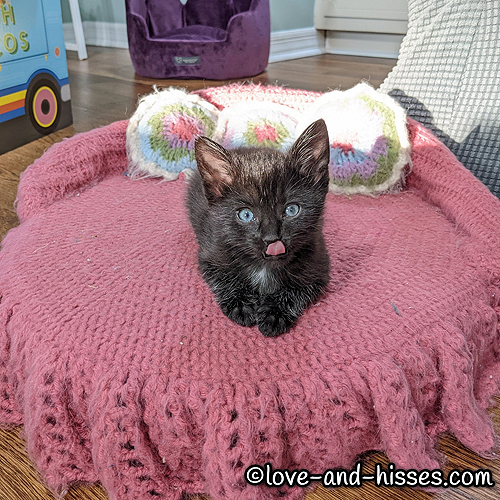 Mike gets comfy on the Fancy Sofa.

YouTube link
Wild kitty girls. I was going to call this video “Girls Gone Wild,” but figured it’d bring a lot of the wrong attention. 🙂 With their brothers mostly sleeping, Nacho and Francesca are getting their crazies out. 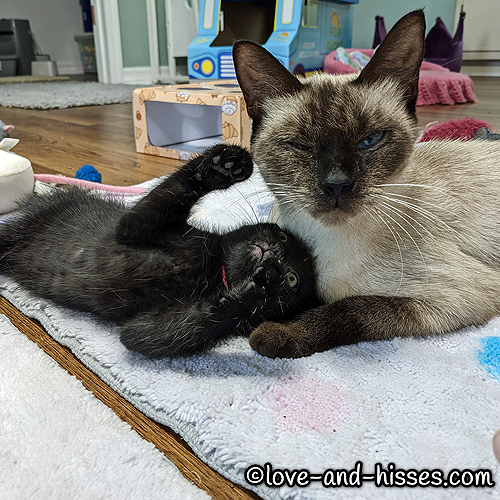 Kim’s all “Lady, discipline this child.” Francesca’s getting sassy. 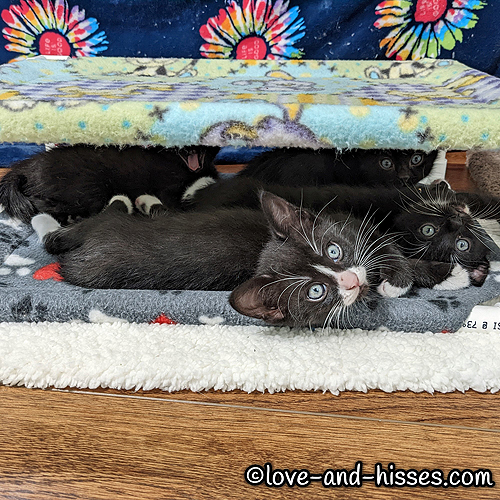 Good night innernets. (Saul, Nacho, Francesca and Gus. They’ve lately taken to cramming themselves under the ham-mick to nap because they’re little weirdos.)