Note: the blog was down nearly all day Tuesday, and I’m sorry about that. My host, Dreamhost, had been fabulous for the past few years (I think I’ve been with them since 2017 or thereabout) but this year it has just been awful. For a long time I thought the issue was on my end – I am using a WordPress theme that is badly out of date and isn’t being supported by the designer any longer – and while that is still an issue, it looks like Dreamhost is certainly to blame for the trouble as well. It’s been infuriating. I will be changing to a new WordPress theme (design) over the next few weeks (it’ll be slow, because it’s been a long time since I had to do that and I’ve forgotten a lot of what I knew), but you won’t see that part of it until you come here one day and things look different. (Hopefully not TOO different.) Once that’s set up, I’ll find a new host and will be moving. Hopefully the impact here will be minimal, I just wanted to give y’all some advance warning. Thanks for your patience! 🙂 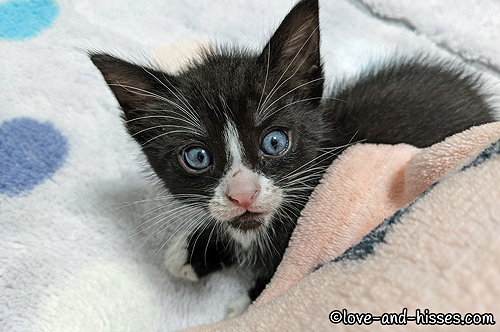 “What you doin’, lady?” wonders Saul. 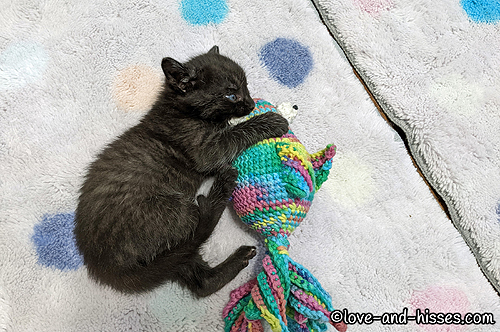 Mike “killed” this crocheted fishy (that is pretty much as big as he is!) and now he’s gnawing on its eyeball. He’s a fierce one! 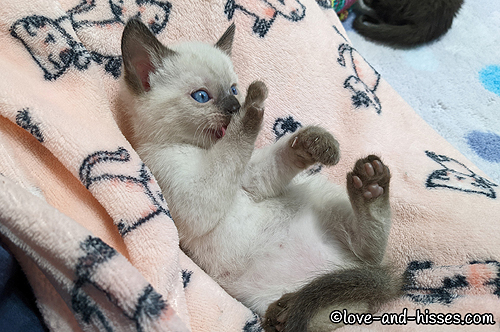 Lalo in my lap, havin’ a bath. He looks very amused, doesn’t he? 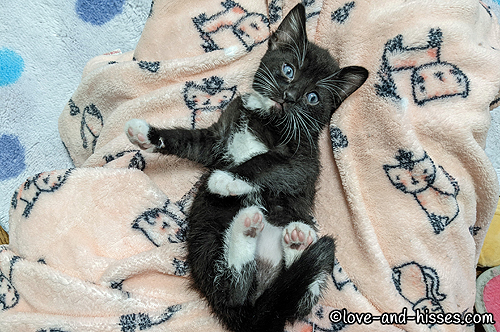 Nacho in my lap, showing off his toebeans. 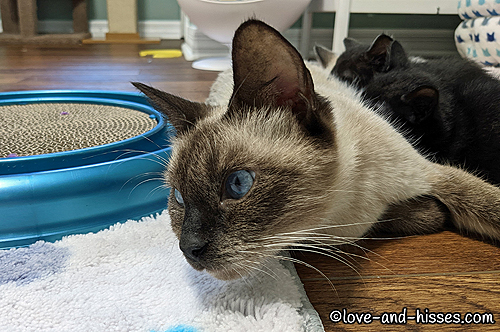 Kim’s keeping an eye on things. 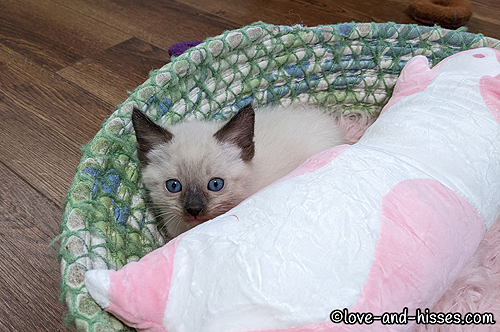 Lalo in the basket! 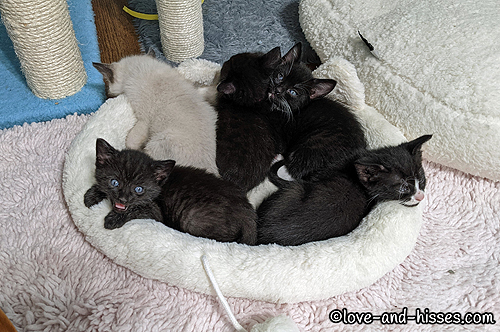 5 of the 6 kittens, and Mike’s got something to say. (Nacho was on the cat tree sleeping. He tends to sleep off by himself. There’s always one in every litter!) 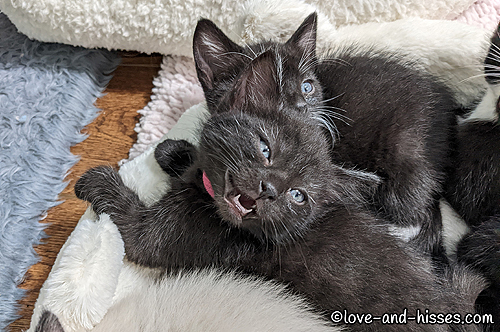 Francesca looks like she made a joke and now she’s laughing at it. 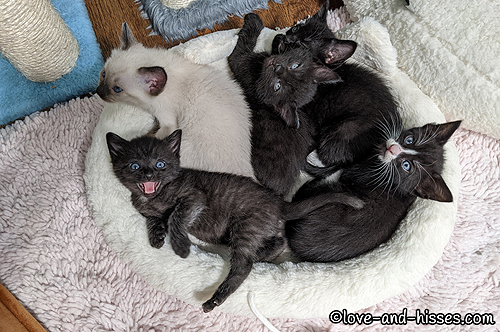 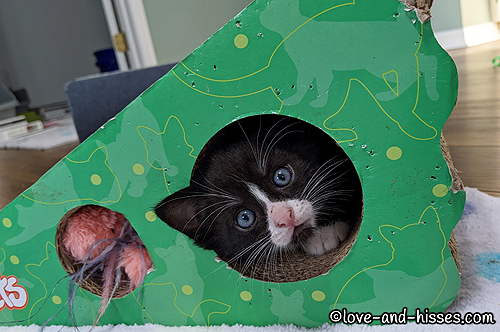 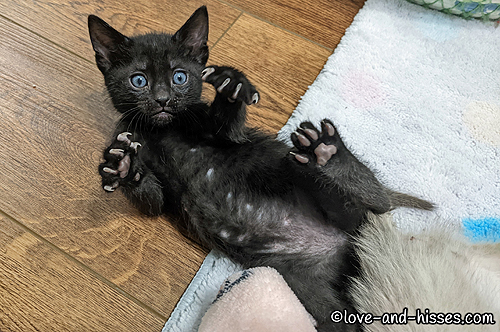 Gus shows off his belly and his sharp little claws.

(Shortly after I took that picture, I trimmed the kittens’ claws. It didn’t go great, because they wanted to race around and play – it’s a lot easier when they’re sleepy – but I got ’em done. Now I just need to remember to keep doing it!) 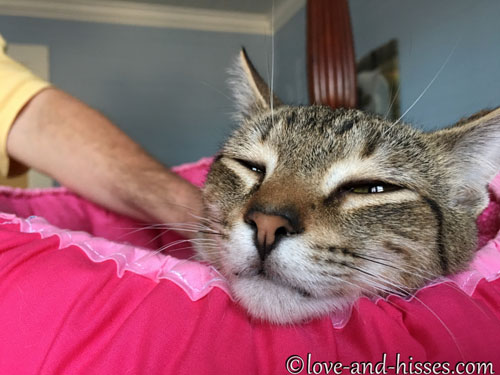 An old picture of Dewey from 2016, looking very content. 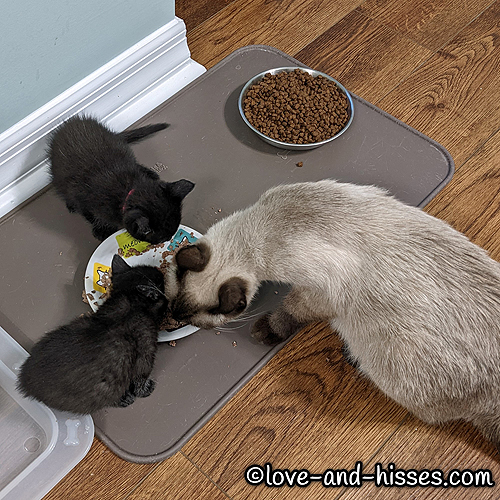 Breakfast is served! Mike and Francesca like to eat off of Mama’s plate, of course. (The other kittens were sleeping and haven’t yet hit the stage where they meet me at the door screaming for their canned food.) 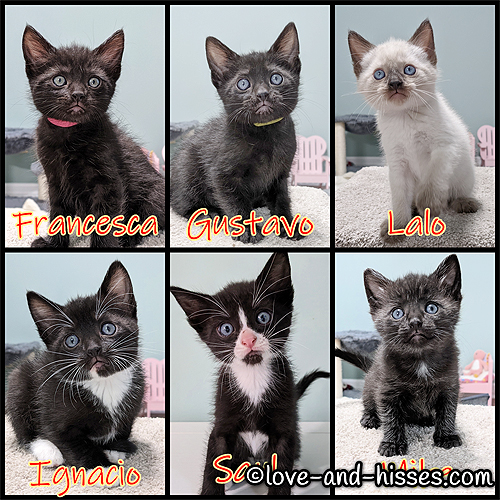 These little muffins are 6 weeks old! (Well, except for Mike of course, who will turn 6 weeks old on Sunday.) This is what they look like, and as of now they are: eating solid food (but also still nursing, because they will nurse as long as mama lets ’em), using the litter box perfectly, and doing a bit of climbing. They’ve got from little lumps of cute to miniature cats. It always amazes me just how fast it happens.

YouTube link
There are a bunch of crybabies in my lap, mama’s pottying Mike, and Saul’s up in his hammock ignoring us all. 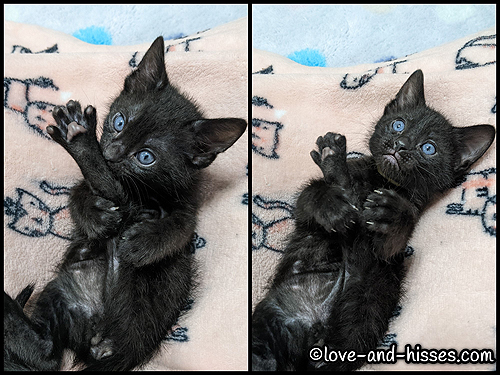 YouTube link
Sometimes when someone asks me a question I don’t expect, my mind goes completely blank and my brain has to reboot (very very slowwwwly.) I think Gus is the same way. 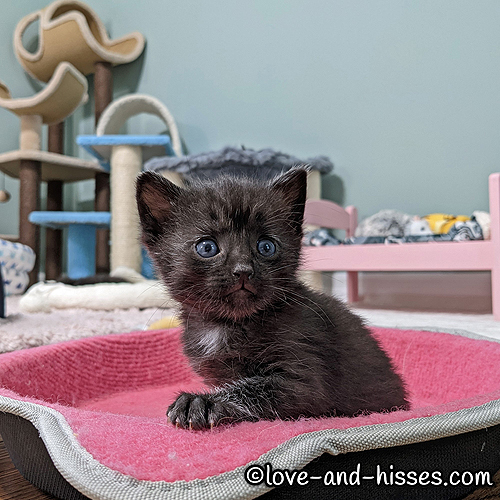 It’s a Mikey pie! My favorite! 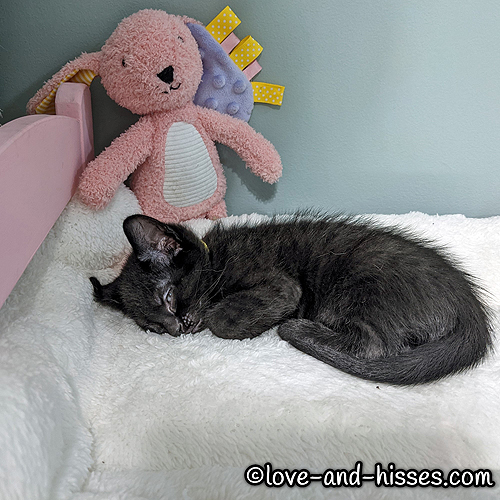