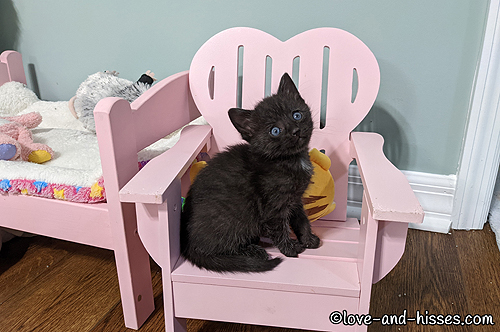 Mike is turning into such a little POSER. 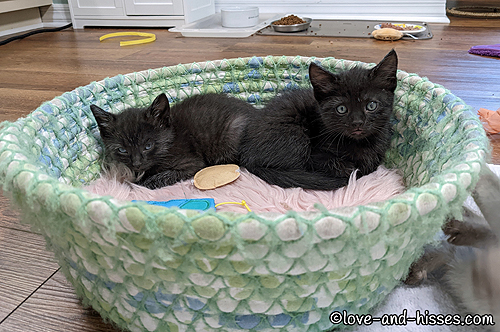 Mike and Francesca in the basket. 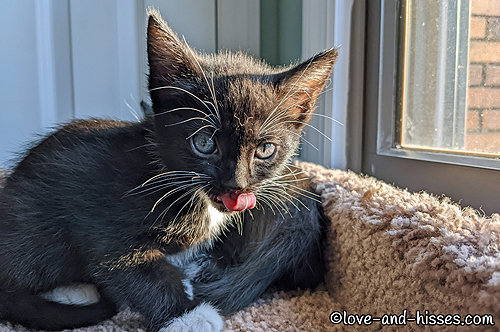 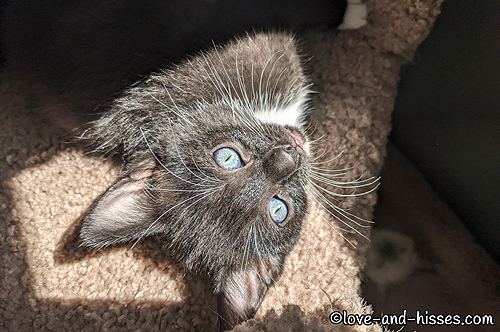 Nacho in the sun. She is such a pretty girl! 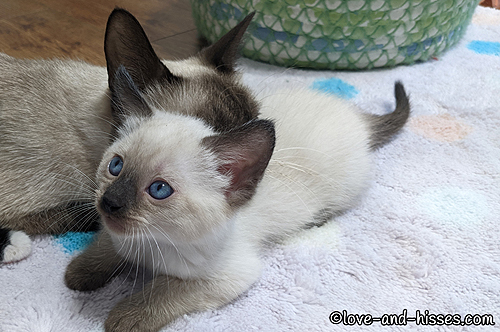 Kim using Lalo as a pillow. 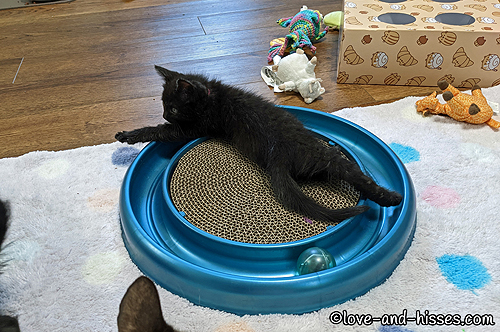 Francesca’s all “This track toy is MINE, y’all stay away!” 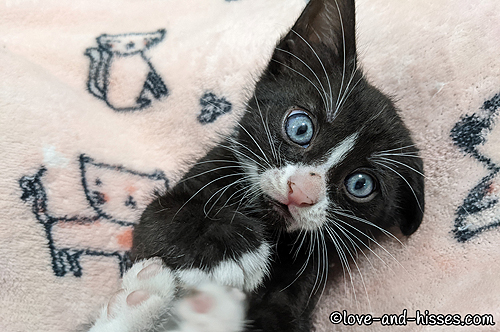 Saul in my lap, being adorable AS USUAL. 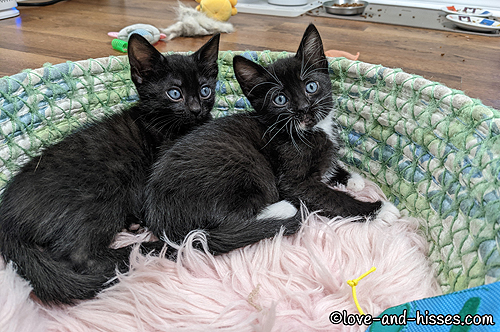 Gus and Nacho have a snuggle. (If you hadn’t noticed, that basket has become very popular lately!) 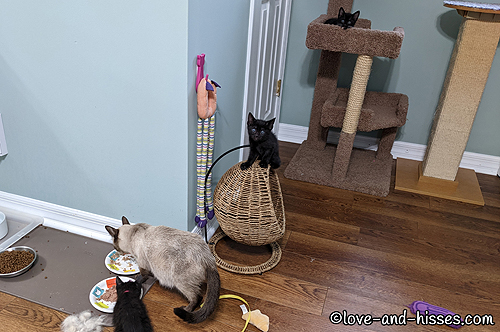 Gus with the innocent face: “What? I wasn’t going to jump down and land on Mama’s back!” (To be fair, he didn’t do that. But I suspect he considered it!) 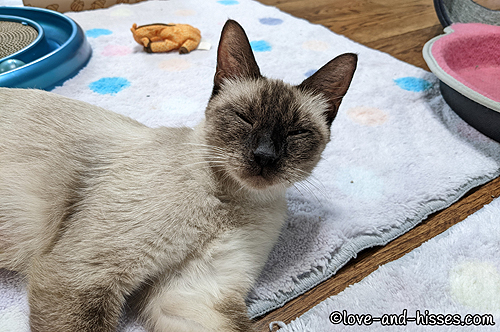 “Is it spay day yet?” One more day, sweet girl! 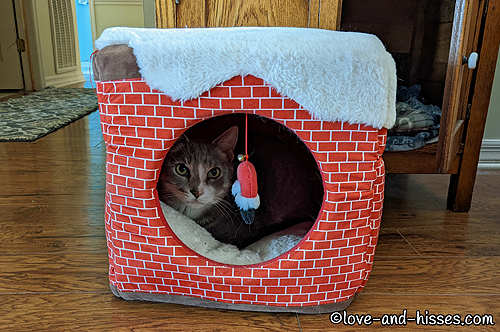 Archie absolutely adores hanging out in that cave. 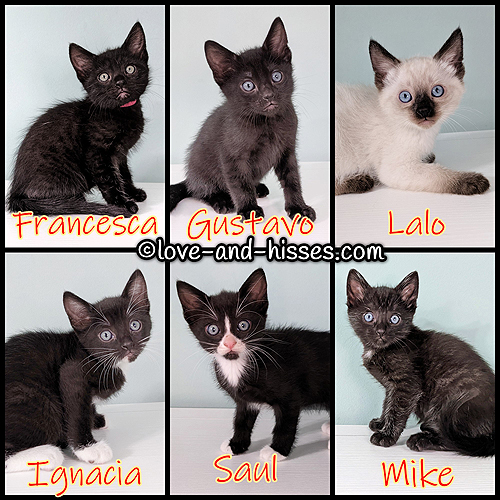 Look who’s 7 weeks old (except for Mike, who will be 7 weeks old on Sunday)! At this point they’re eating on their own, they’re using the litter box perfectly, they’re playing (and racing around like crazy things). They are super healthy and doing great! 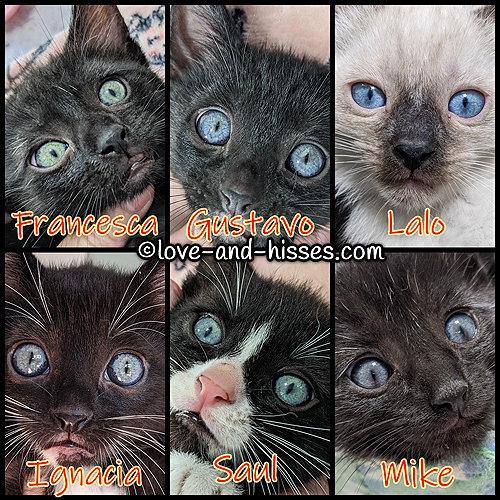 The eyes! As you can see, Francesca’s eyes are mostly green with just a slight ring of blue around the outside, Lalo’s eyes are still blue (I expect his will stay some shade of blue), and Gus, Nacho and Saul have green starting to come in. Mike’s eyes are a mystery to me – what usually happens with kittens’ eyes is that they start with deep blue eyes, they turn lighter, and then you see either green or gold starting to color in around their pupils and move outward (as seen most obviously here in Nacho’s picture). Mike’s eyes are still totally blue except for that darker color – I’d call it a dark gray – coming from the top and bottom of his pupils. I am so very interested to see what eye color he ends up with. (Side note: this litter is proof that you can’t make a definitive statement about when kittens’ eyes turn their permanent color. It’s generally accepted that by 7 weeks old, they’re mostly the color they’re going to be, but that’s not true of this bunch. It’s certainly interesting to watch them change!)

YouTube link
Mike and Gus have a tussle. Well, maybe not a tussle. Maybe the threat of a tussle? In any case, it’s entertaining. 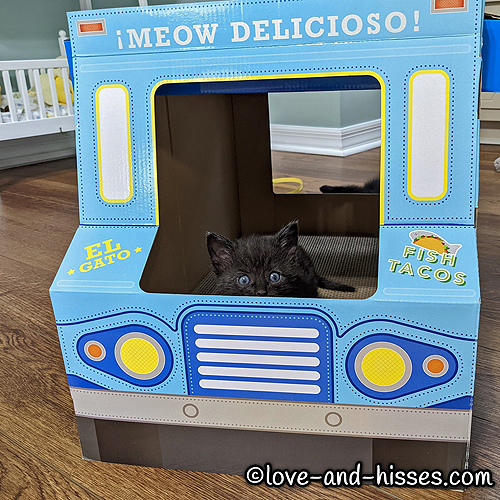 YouTube link
Almost 4 minutes of kittens playing, having a blast (and entertaining us all!) 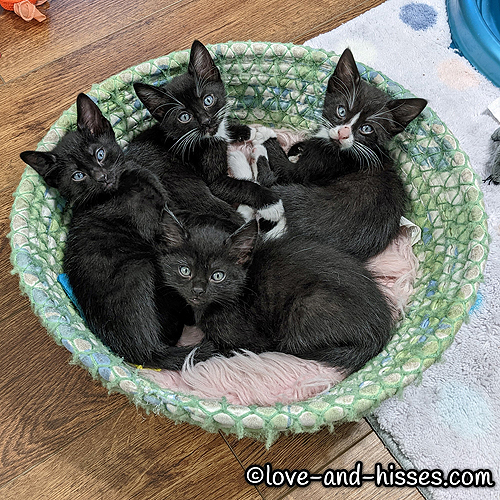 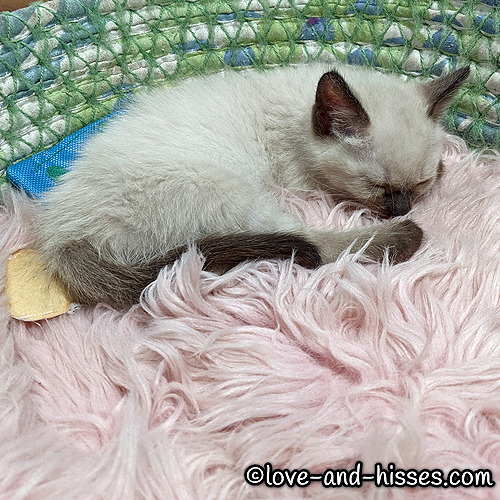