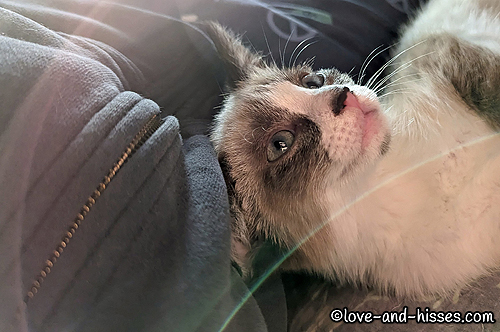 Linzer in the sun, havin’ a think. 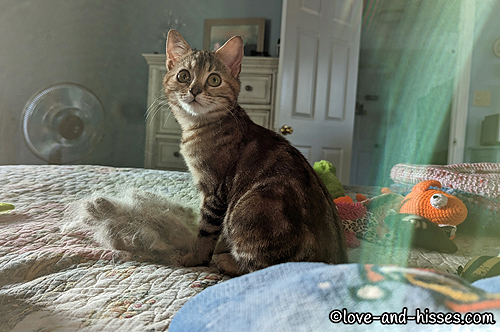 Cinnaspin considers her next move. 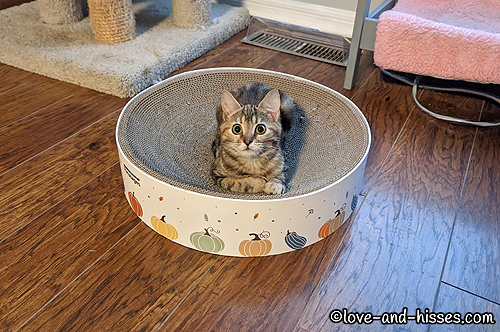 Cinnaspin discovered the scratcher bowl and was all “Hey, this is kinda cool.” 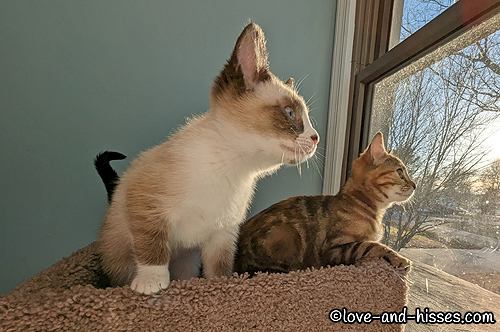 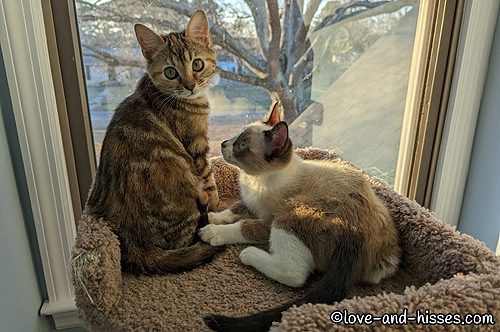 Cinnaspin sure would like to get her paws on one of those birds. 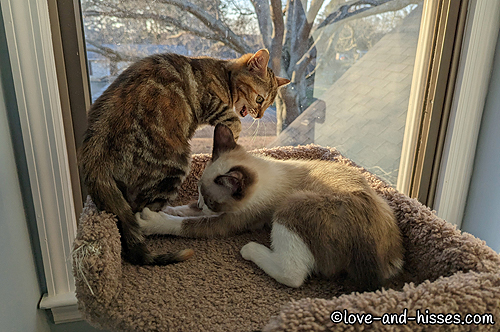 The girls came through their spays just fine, and I had them back here by a little after 9:30. (When I dropped them off at the vet’s office, they told me I could pick them up “After 9.” Did I walk through the door at 9:01? You know I did!) They ate a little, and then played, and I swear they don’t even know anything happened to them – which is exactly how I like it!

Friday marked 2 weeks since Brioche came to us, so I took the Cookie Girls into the foster room to meet her. 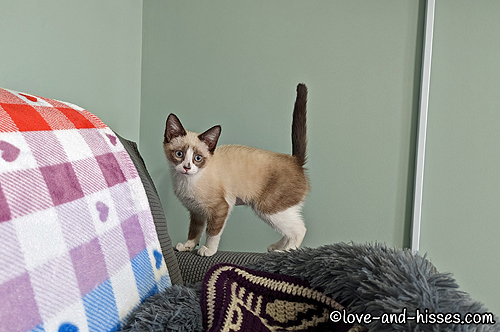 Linzer was all “WHAT THE-?” 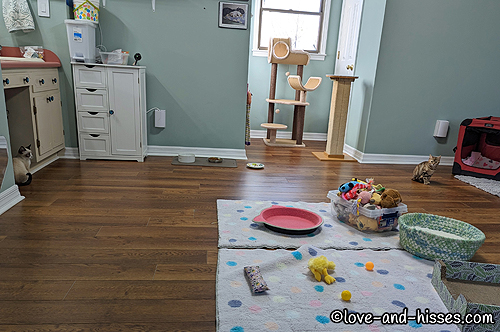 Brioche (who is not in this picture because she was up on the couch right next to me) took one look at those kittens and hissed and growled and said “NO THANK YOU.” 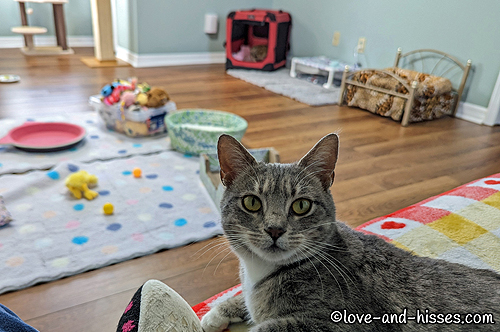 “I was told that I’m done with kittens,” she said. (It’s hard to tell, but Cinnaspin was checking out the crate over there in the corner.)

We stayed in the room for about 10 minutes, and then I shooed the Cookie Girls out of the room.

Of course, just tossing cats together like that is the exact opposite of how you’re supposed to introduce them, though it’s usually what I do with kittens. Since there was so much hissing and growling between Brioche and the girls, I decided to slow it down. Yesterday I site swapped them – put the Cookies in the foster room and let Brioche check out the rest of the upstairs. Brioche was a little nervous, but the Cookies had a blast in the foster room. I let them have about an hour in each others’ space, and then put Brioche back in her room and let the Cookies out. I’ll continue to site swap for a few more days and see how it goes.

(I did get some video, but I need to put it together and will post it on social media later today.) 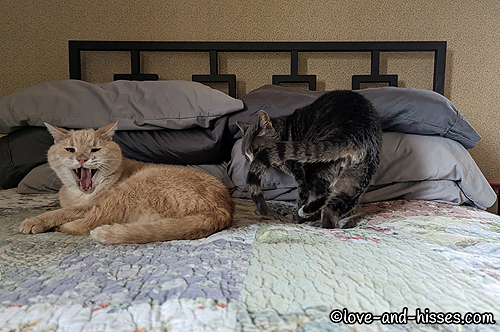 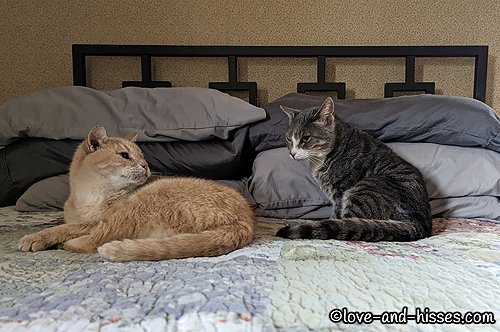 Newt’s all “Settle down there, I’m trying to nap.” 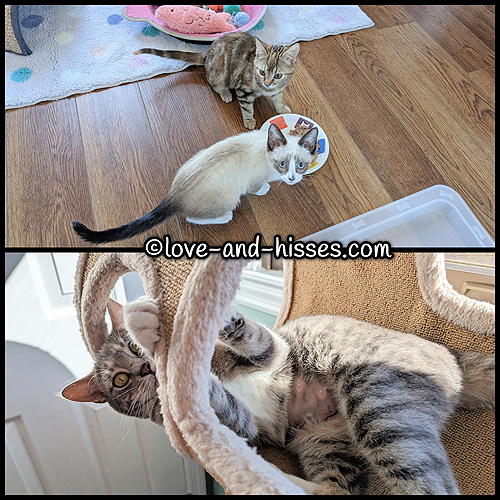 (Foster) home again, home again! Cinnaspin and Linzer bellied right up to breakfast and Brioche showed off her little shaved belly. All three are doing well and don’t appear to know that anything has happened. ❤️⁠

YouTube link
Cinnaspin and Linzer were spayed yesterday, but it clearly hasn’t slowed them down at all! 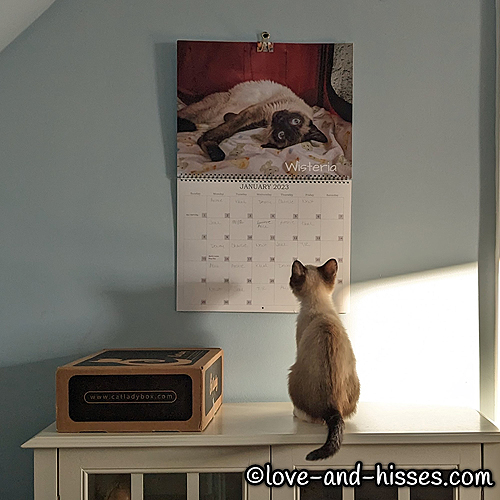 Linzer’s checking her calendar to see if she can pencil you in. 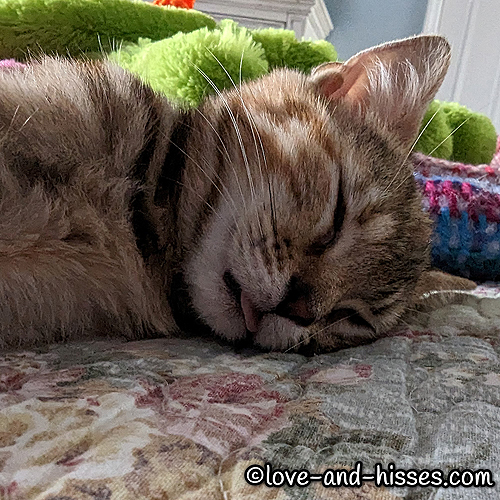 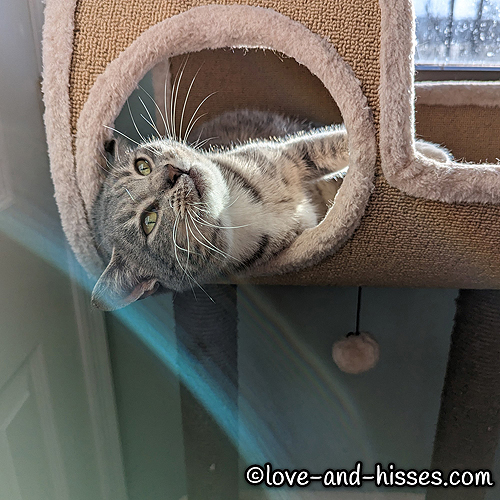 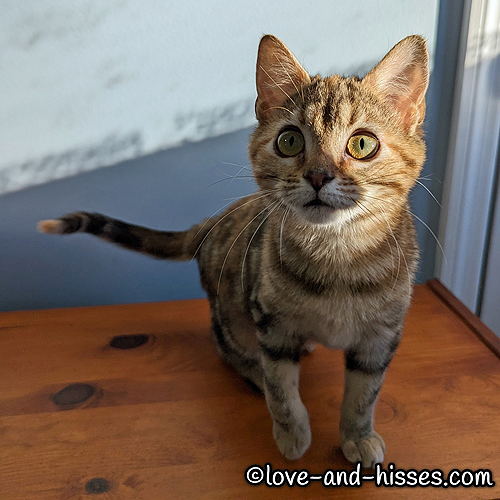 Cinnaspin is enjoying the sunshine, since it sounds like it’s going to start raining tomorrow and will be rainy and gloomy all week long. YUCK.

YouTube link
The sun was hitting the back of my phone and the reflection made a laser-like light on the wall that caught Linzer’s attention and then Cinnaspin’s attention, and those girls are just too darn cute. 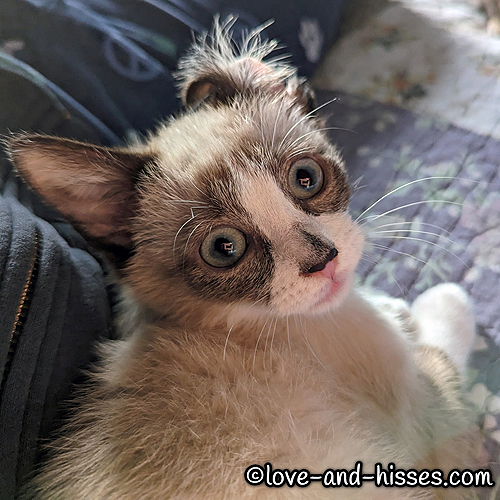 Is it me, or does Linzer’s folded-over ear make it look like she’s wearing a fancy hat? 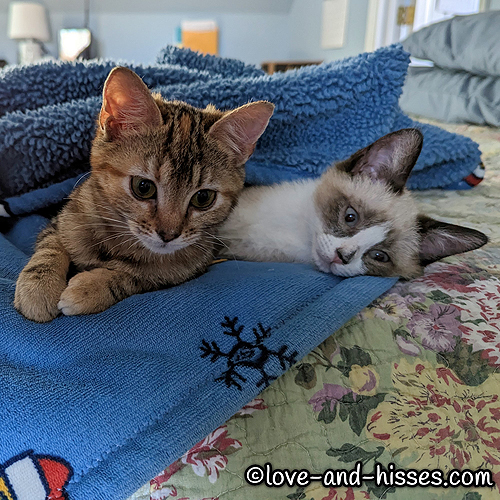 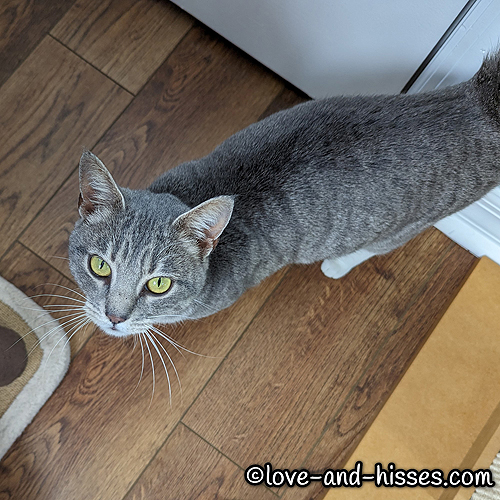 Brioche is all “Excuse me, lady, I wonder if you know that it’s time for my breakfast?” 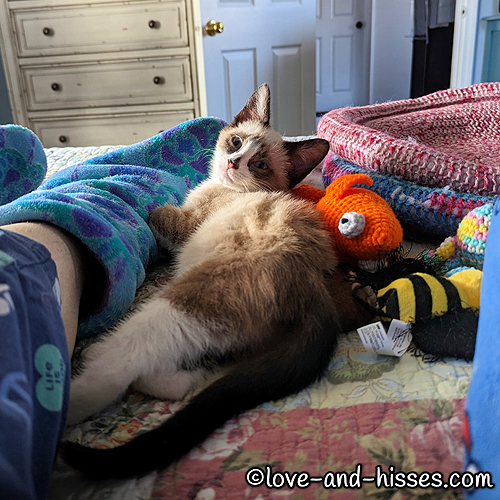 YouTube link
I was chopping up (raw) chicken and gave the cutting board (with pieces of raw chicken on it) to Alice. Cinnaspin heard there was something going on in the kitchen and she stomped in, stole a piece of chicken from Alice, and proceeded to eat it while growling at Linzer & Alice. 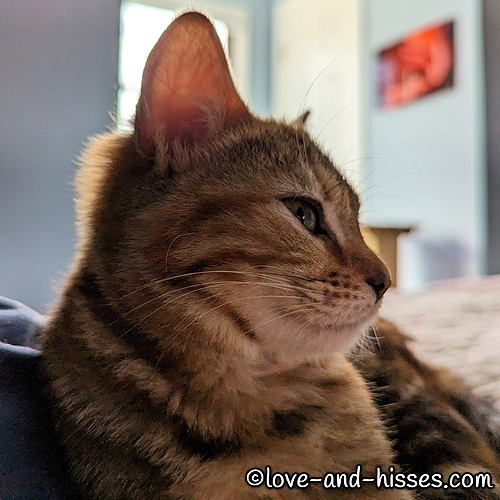 Have I mentioned that Cinnaspin has THE sweetest profile? True story! 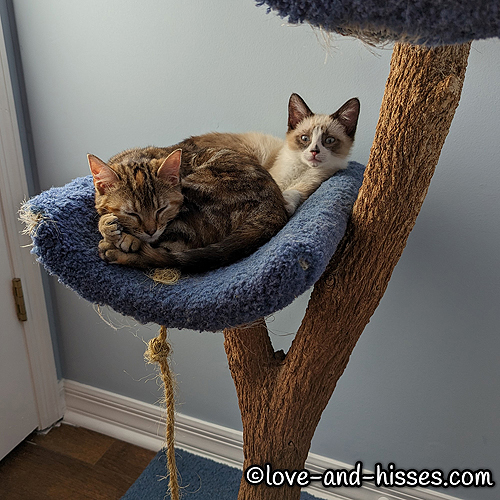