I’m sure you remember Kohle, who was with us at the end of 2012, while we had the ‘Maters boys? His name is now Flynn, and I got an update (and pictures!) from Selena.

Just realized I haven’t sent a Flynn update with pictures in a while.

We went to the vet a couple of weeks ago for one shot and a nail trim. He is all good! Growing to be a BIG boy. He weighed 11.4 lbs. He is also very very long legged! These pictures really don’t do him justice at how big he is. 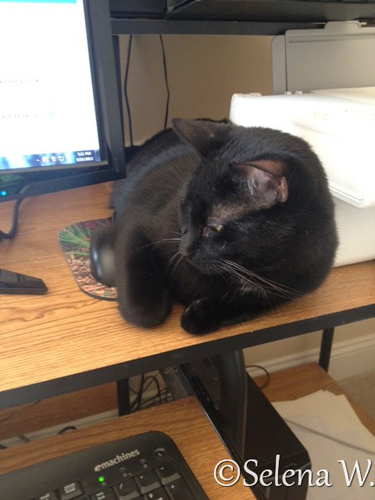 We were visiting my parents house and he made himself at home at my dad’s computer. 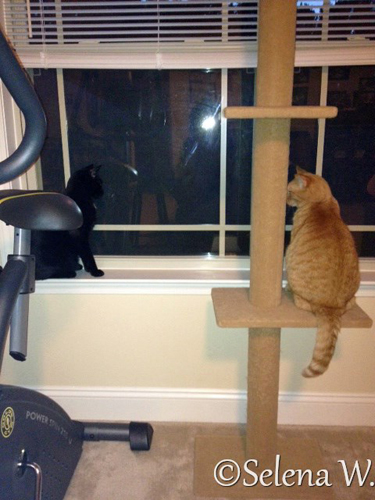 He has become good buddies with my parents older cat Booboo. He and their female cat, Dolly, do not get along – yet. 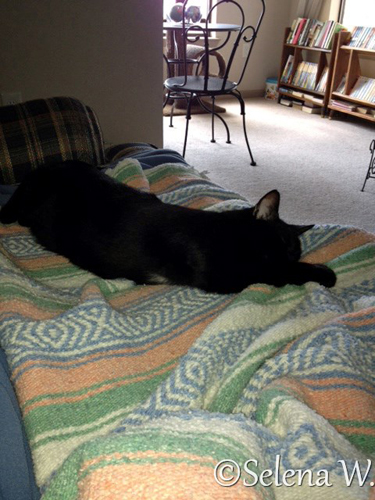 Stretched out for a nap with me on the couch. See how long?? 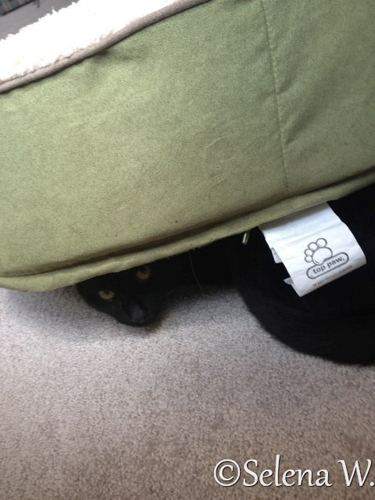 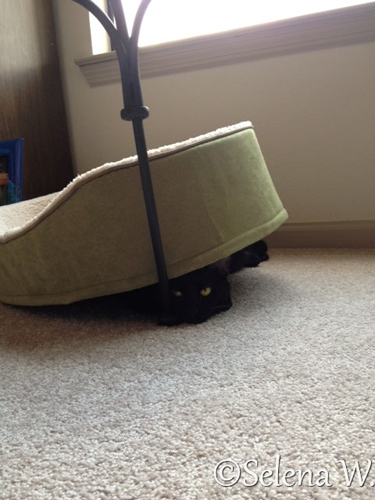 This has become his new hiding place. He likes to nap under the bed instead of in it. 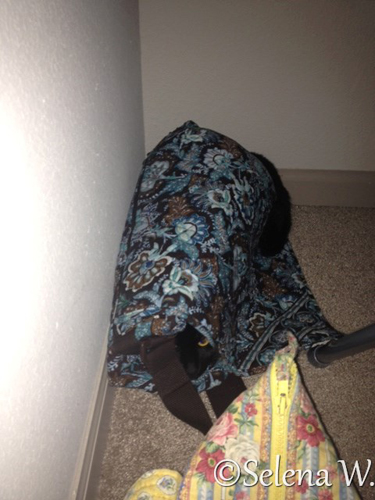 I took this picture this morning. He got really quiet and I couldn’t find him. This is my computer bag under my desk. He never stops making me laugh.

Hopefully, we will be able to bring home a buddy for him soon! He sure loves having someone to play with when we visit my parents house.

I so love seeing Kohle happy in his forever home! Thanks for the update, Selena. 🙂 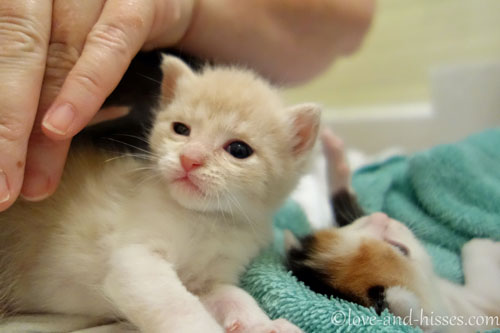 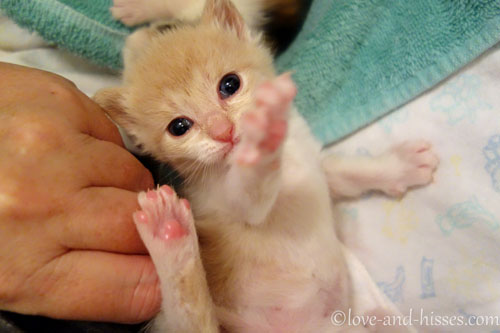 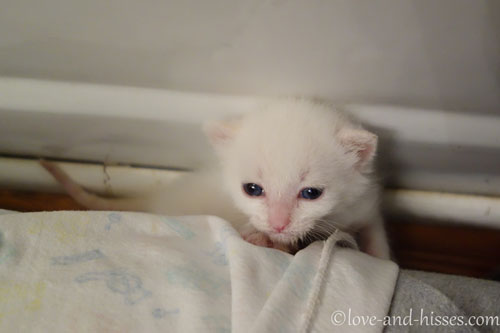 “Well, I climbed down off the lady’s lap, and now I’m stuck here in this chasm between her leg and the side of the tub.” 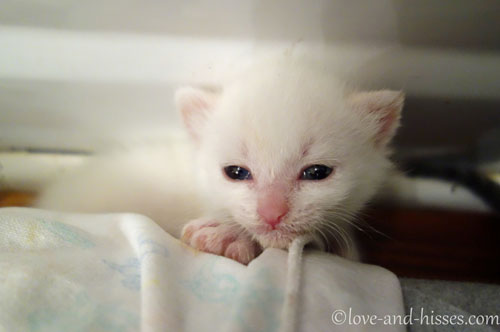 “It appears I’m in quite the pickle.” 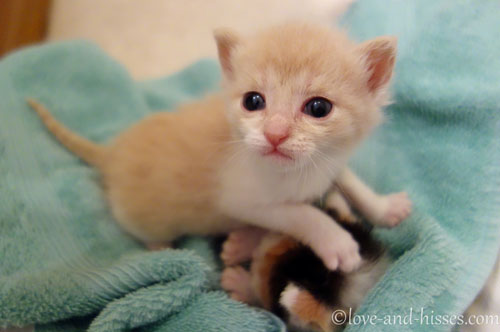 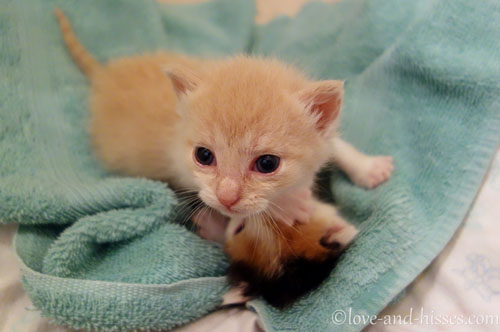 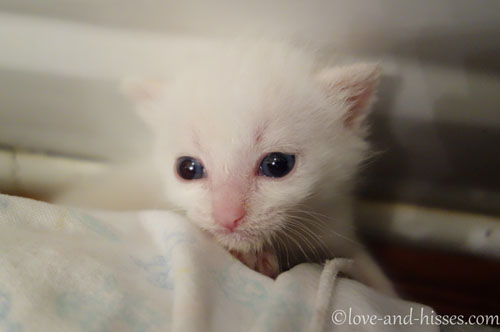 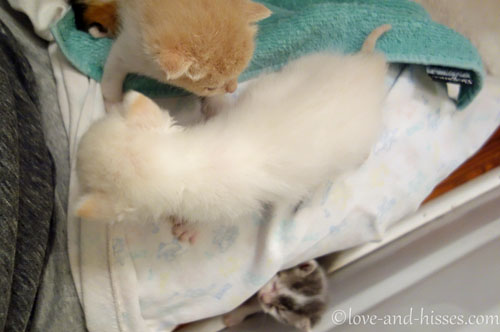 This picture is just to show how the orange is starting to show up on the backs of Jon Snow’s ears. His tail, too! 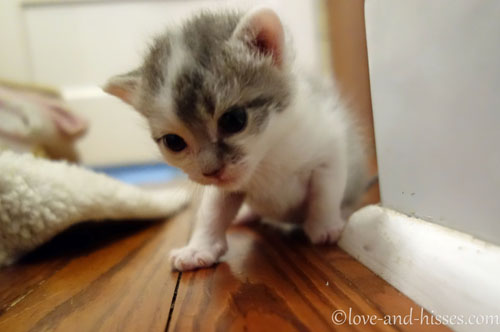 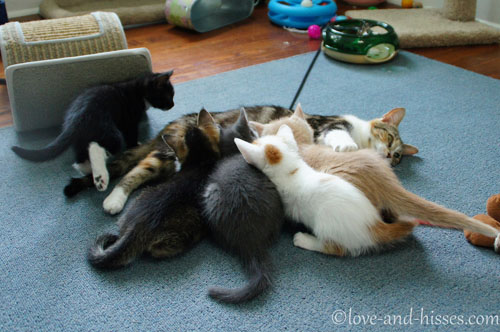 In honor of Khaleesi’s spaying (I’ll be leaving here in a little while to pick her up), here are pictures of her being the awesome mama that she is. 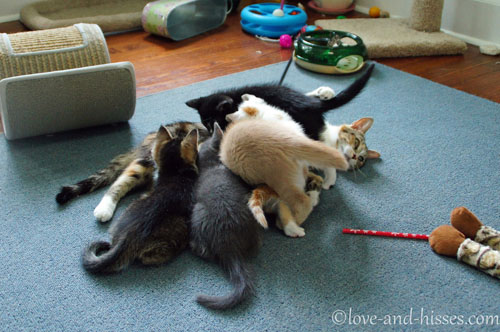 The look on her face is killing me. But she has no one to blame but herself – she totally flopped down on her side and called to her babies. 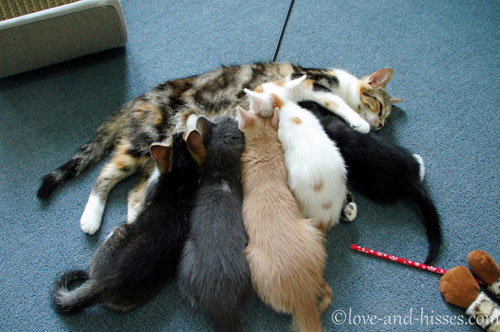 All five managed to belly up for a few minutes. 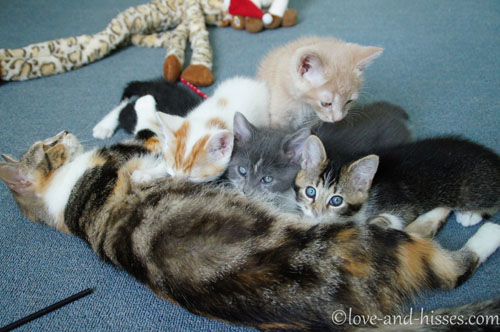 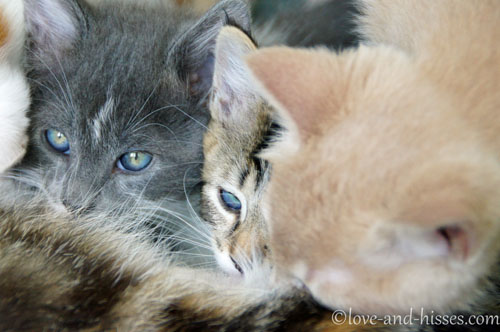 Puff’s eyes are starting to turn gold-green in the center. I think he’ll end up with eyes the same color as Khaleesi’s. 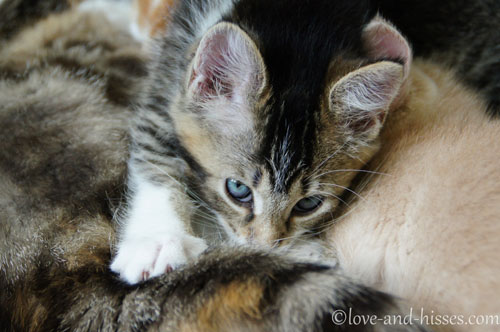 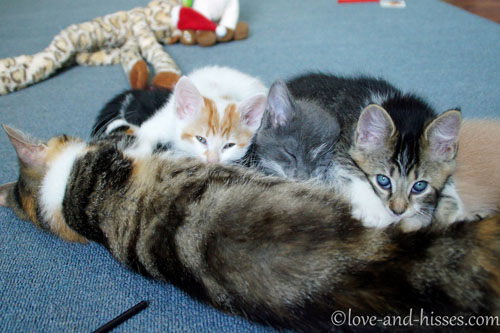 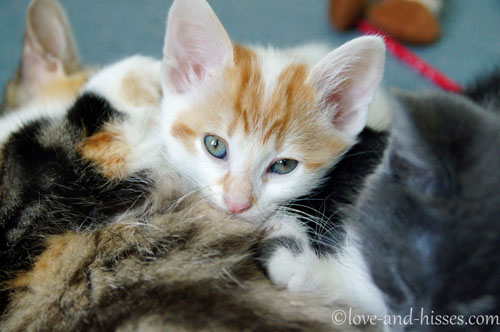 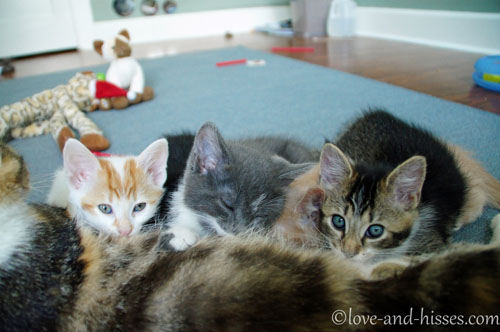 To answer the questions in yesterday’s comments, I don’t believe any of the kittens will be retaining their blue eyes. They’re all starting to really change; I’ll try to get better pictures of how they look. I wish they could stay that gorgeous dark blue, though. (Although Fred can’t resist a blue-eyed cat, so maybe it’s better that they do change!) 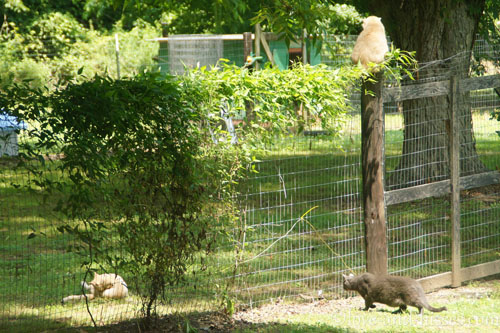 A scene from the back yard: Newt on top of the fence post, Stefan bathing on the other side of the fence, and Jake staring through the fence at Stefan. 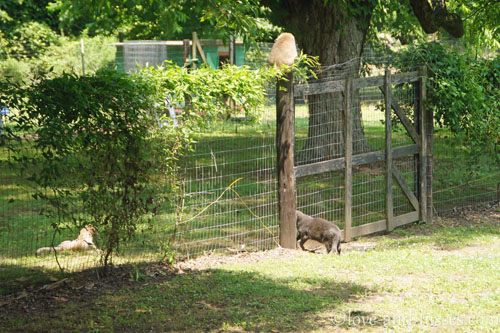 A few weeks ago, Fred didn’t close the gate properly, and Jake was able to squeeze through (and immediately came over to the side stoop and right inside when I opened the door. Silly boy). Ever since, he keeps going over and trying to squeeze out the gate. And he’s SO puzzled when he’s unable to do it. 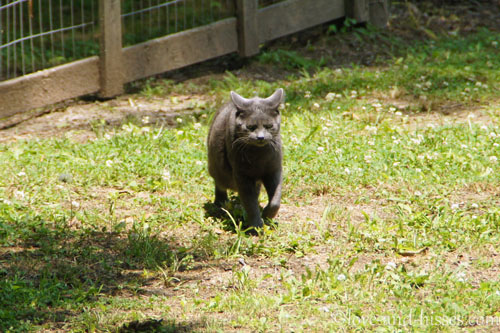 Puzzled and annoyed. SO annoyed. 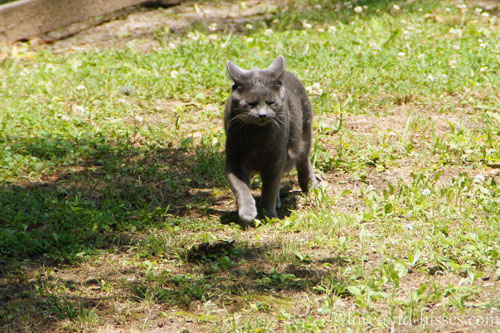 I just know he’s mumbling obscenities under his breath as he stomps across the yard. 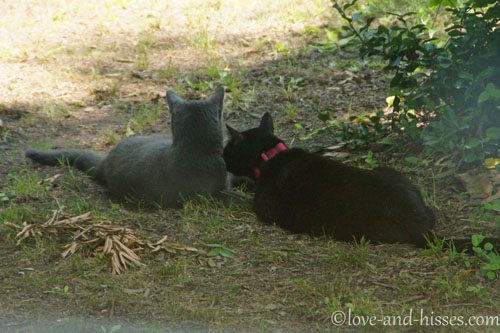 At least he can get some attention from Tommy while he stares, fuming, at that darn gate.