Alice will be two years old in June.

When I think of the day – or really, I should say the evening, because it was after dark – that Alice showed up, I think of being REALLY FREAKIN’ COLD (it was December 2010). Fred spotted her – he almost always spots the cats who show up before I do – when he opened the door to step outside. Something ran away from the food bowl on the side porch, and he thought “Was that a cat?” and then went down the steps to see. Alice ran from the side stoop to the front porch (where there’s a heated cat house, and since it was mid-December, the heat was turned on), and when Fred followed her to the front porch, he found her sitting in the doorway to the cat house. When she saw him, she meowed at him, and then ran around to the other side of the house where there’s a huge boxwood. She ran under the bush, and stayed there no matter how much he sweet-talked her.

He came in to get me, and I followed him outside. We could see Alice, but she was too far under the bush for us to reach her, and though we tempted her with all manners of food, she refused to move. Finally, we set up a trap on the front porch baited with mackerel. Then we had to go run an errand in town, and when we returned half an hour later, she was in the trap. She was a terrified little girl, didn’t want us to pet her, didn’t want anything to do with us. It’s my policy that cats and kittens who haven’t been tested don’t come into the house, and so we set her up in the old blue coop with beds and a heater and a stuffed animal and food.

The next day, we had to take the inside of the blue coop apart, because she was hiding in the old nesting boxes to get away from us.

It took a few days, but eventually Fred won her trust. I took her to the vet to be examined and tested, and that was when we found out that this kitten, who I’d estimated was about two months old, was actually more like six MONTHS old. At a later examination, the vet said that she didn’t think that Alice would get much bigger than seven pounds.

Alice lived in the bathroom for a few weeks, and once we knew that she was disease-free, she went to live with the Brady Bunch, in the foster room. (Her official foster name was Alice Nelson, which was the full name of Alice the maid on The Brady Bunch. But you knew that, right?) She’s not really a big fan of other cats, though she and Reacher had a special relationship wherein she demanded that he cater to her every whim and he obeyed. Despite her semi-feral start, Alice has turned out to be a great big lovebug. She loves Fred the most (the crazy girls always do), but she kinda likes me, too. She likes to spend her days alternating between the back yard and the platforms in the front room, and her evenings staying where she can see Fred, sometimes on top of him and sometimes across the room, depending on her mood. She doesn’t really have any other cat friends, but she can occasionally be seen snoozing near Tommy.

Alice did not stay tiny, and despite the vet’s guess at her eventual weight of around 7 pounds, she is now an average-sized (maybe a tiny bit portly) cat.

I should add that Alice actually DID go off to Petsmart with the Brady Bunch, but Fred missed her so much that less than 24 hours we went and got her, and brought her home. Alice has her own theme song:

See all pictures taken of Alice over at Flickr, or scroll through them below. 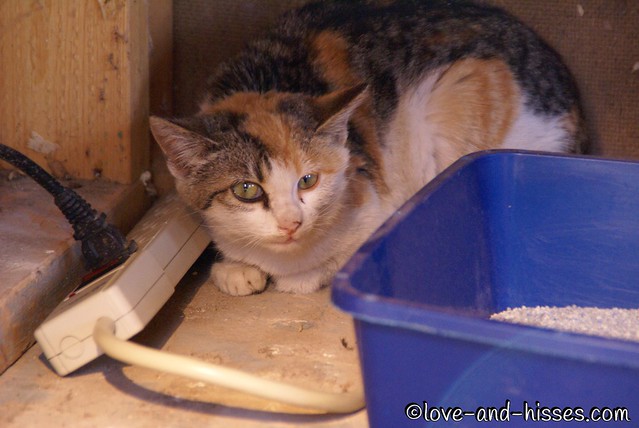