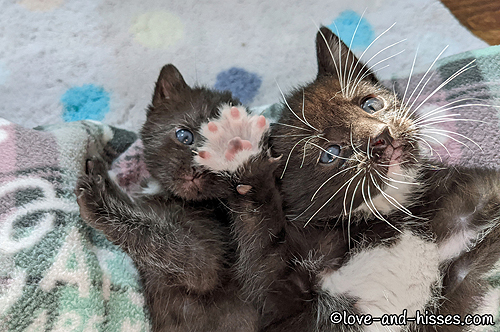 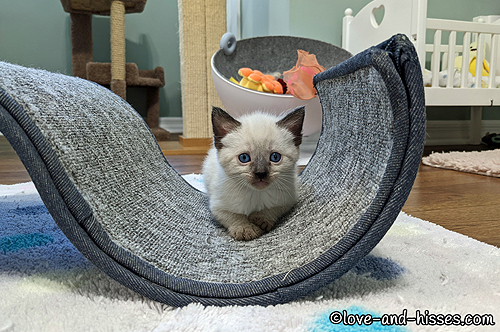 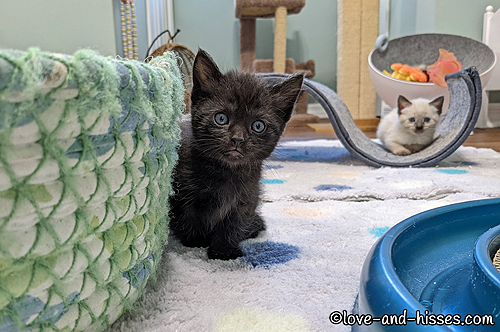 And Francesca coming around the side of the basket to see what’s going on. 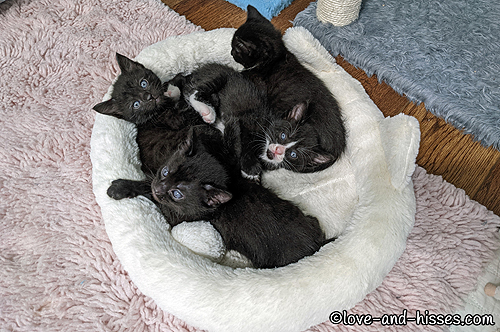 Right now, this bed seems to be the kittens’ favorite. Usually when I walk into the room, they’re all snuggled up in this bed (you don’t see Mike in this picture because when Mike sees me, he runs over to me just as fast as his little legs can go. Also missing is Lalo, who was in the litter box.) 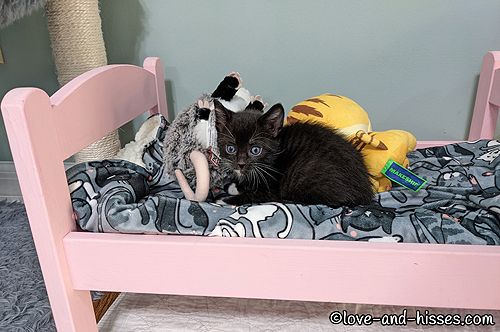 Nacho likes the doll bed, too. 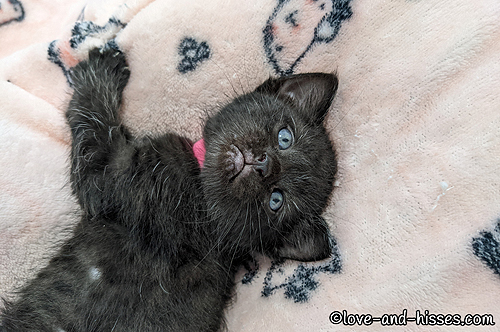 Francesca in my lap. 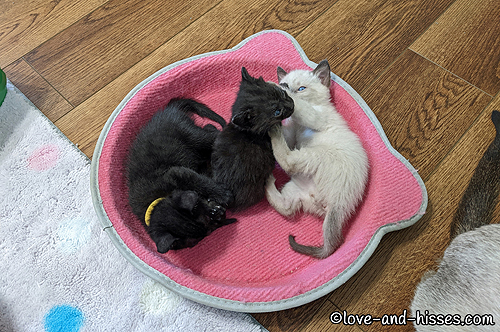 It’s a Gus-Mike-Lalo pie! (My favorite.) 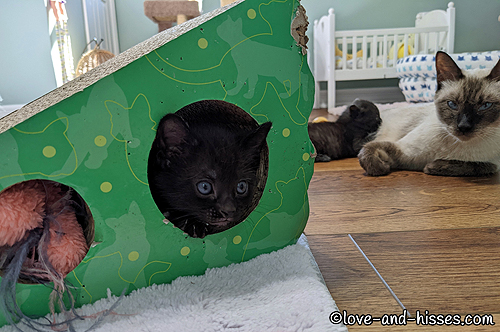 Gus has some tunnel time, with a Kim Wexler photobomb. 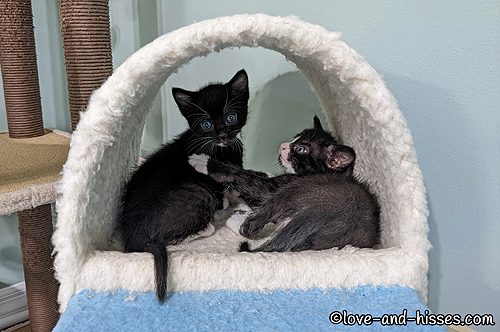 Saul and Nacho are starting to love the top of this little cat tree. 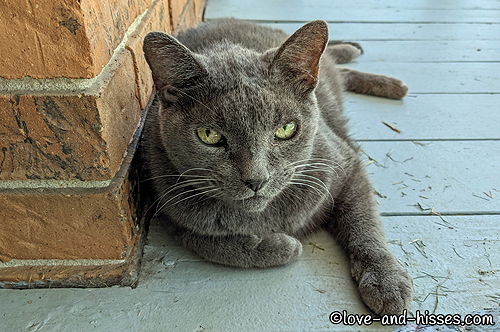 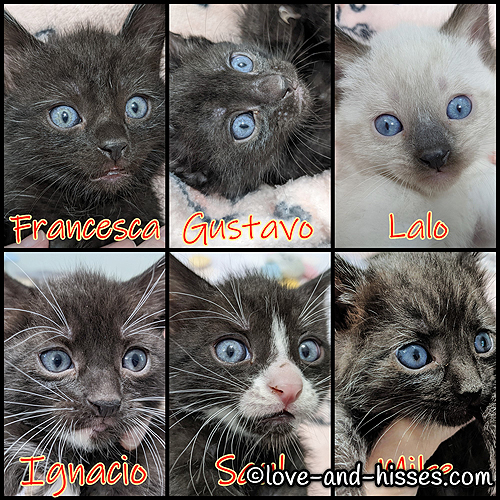 The eyes! These pictures aren’t the best, because the kittens have hit their wiggly stage and don’t particularly want to hold still so I can take up-close pictures of their eyes. But you can see where their eyes are right now, color-wise. I fully expect that only Lalo will have blue eyes in the end, but right now, they’re all still pretty blue. Francesca’s got a definite ring of green around her pupils, and the color around Nacho and Saul’s pupils are lightening in preparation for changing color as well (I’ve seen it happen often enough that I’m pretty confident in saying that.) Gus doesn’t seem in any hurry to lose the blue, and neither does Mike. I think a couple of blue-eyed black cats would be cool (I’ve never had that before), but I expect their eyes will start changing too pretty soon. I’ll see if I can’t get another update on their eyes in a couple of weeks, and we can compare. 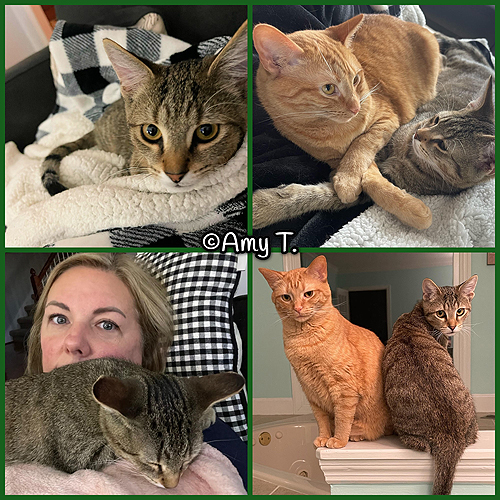 We have an update on two former fosters! Amy says: “Leo (formerly Athos) and Axel (formerly Clover) are two peas in a pod! They love to play and cuddle and get into mischief together. Axel is also getting on very well with our other orange tabby, Dreyfus, who now thinks Axel is big enough to finally play and wrestle with (Dreyfus is a BIG boy – lol). Our calico, Bella, tolerates Axel just fine but he’s getting more feisty with her and she occasionally has to put him in his place! Axel is a big love bug and will randomly jump on my chest and snuggle up in my neck and purr very loudly and sleep! Axel is doing great and is very loved along with our other fur babies!”⁠
⁠
(Thanks, Amy!)

Throw Back Thursday: Back in 2016, when we lived in a different house (holy cow that kitchen was a mess), our permanent resident Stefan brought a snake into the house. The two best parts of this video are (1) Stefan walking through the kitchen with the snake, and (2) my scream at the end, then the long silent moment where I was staring in disbelief, and my yelling “FRED ANDERSON!” so Fred would come rescue me.

(See the picture of Stefan proudly posing with the snake here.) 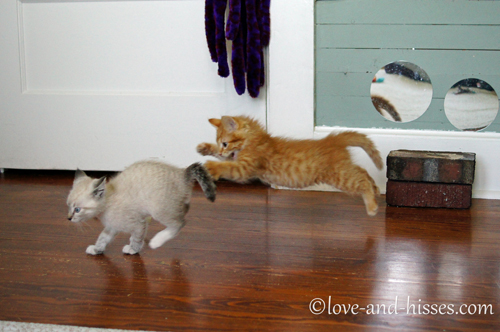 Throw Back Thursday: from 2014, when I was fostering the Grocers litter, I happened to catch this show of Trader Joe (left) and PW in motion, and it’s one of my favorite shots ever.

YouTube link
The kittens, who all shared a bottle not 30 minutes previously, swear to me that they are STARVING TO DEATH.

YouTube link
Mike is cute. Too cute. It should be illegal to be this cute. ❤️ 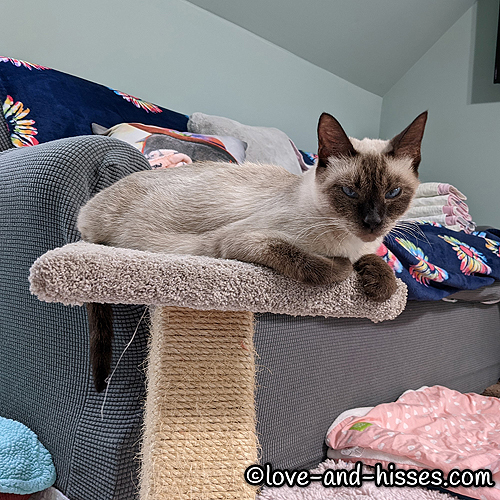 Mama knows how to grab a little quiet time for herself when she needs it. 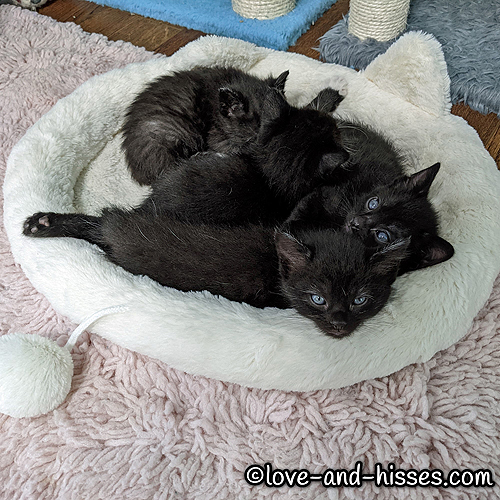