I don’t know if this question has ever been asked but how do your permanent residents act when your foster litter goes to PS? I’m asking because those that had daily play sessions/interactions have become uncharacteristically clingy. They seem to really miss the little ones.

Did that used to happen in the long past for you (I know you’ve been doing this a long time) or does it still happen, on occasion? I didn’t notice it mentioned in your blog, but I’m only into 2009.

This is only my 2nd foster litter and the first one was a fail. It’s been difficult to give these little ones up, but I’m determined to try and become a good foster home. Now, dealing with the cleaning and cattitude at home is my next new experience.

My permanent residents have zero reaction to the fosters moving on. For the most part they’re uninterested in the fosters (though Archie and Charlie like to watch them play and will occasionally play with them for a moment), and we’ve been fostering as long as we’ve had all of the current permanent residents. Jake (and his brother Elwood) actually grew up alongside a litter of fosters, and I worried that when they moved on, Jake and Elwood would miss them terribly, but they mostly shrugged it off. The only advice I can think of is to give them extra attention and love. As more fosters move through regularly, I think they’ll get used to it.

Now you know we all need to see Archie in the honeypot bed!

I haven’t been able to get a recent picture of Archie in it, because he burrows into it so that you can’t even see him in there – but here’s one from earlier in the year to tide you over! 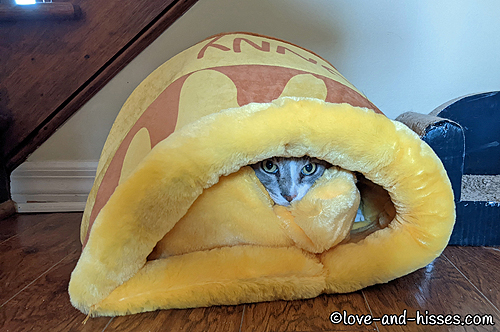 Would you name them by collar color. I know Francesca is in pink and Lalo doesn’t look like the others. Thx

Francesca (pink) and Gus (yellow) are the only two wearing collars (also, Francesca has eyes that are much greener (at this point) than Gus’s). Saul has a white stripe up his nose, and Nacho doesn’t. Lalo is the Siamese mix. And Mike… is Mike. I just know him by looking at him (though I probably ought to put a collar on him to make it fair!)

What kind of air purifier do you have? You mentioned the controls are on top which is what I would need for our herd of little paws as well. 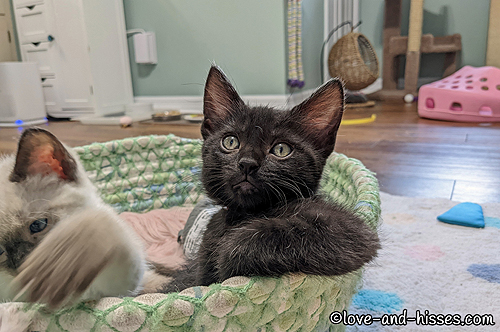 Francesca with her elbow up on the side of the basket is hilarious. She’s all “How YOU doin’?” (Meanwhile, Lalo’s playing slappy paws with Saul over there on the left.) 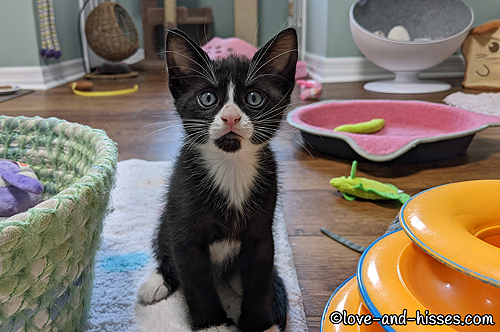 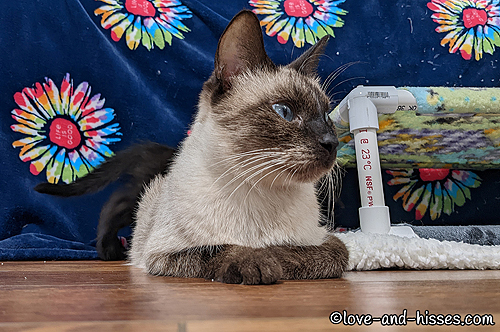 Mama’s keeping an eye on things. 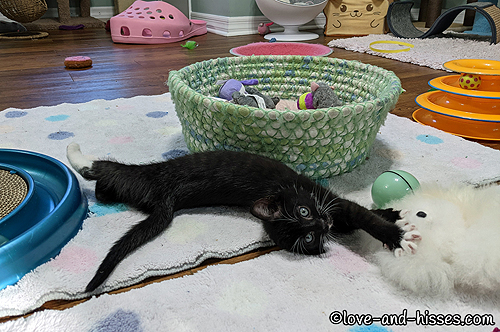 Nacho goes for the stretch. 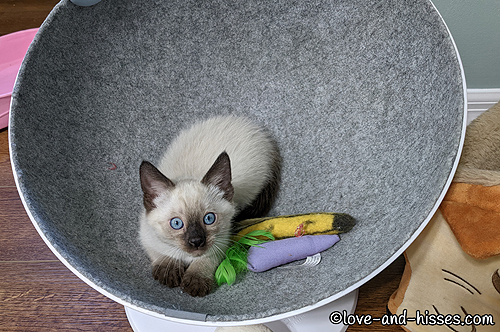 Just a Lalo and his toys. 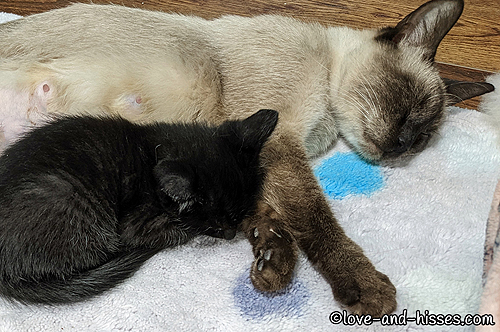 Mike takes a nap with Mama. 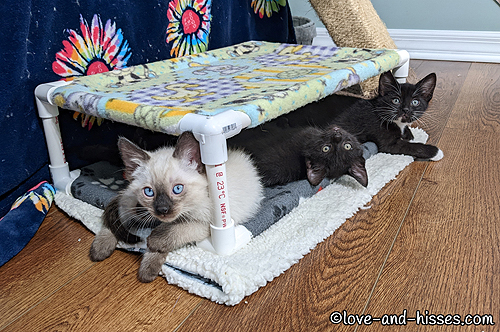 Lalo, Francesca and Nacho take a nap under the ham-mick. 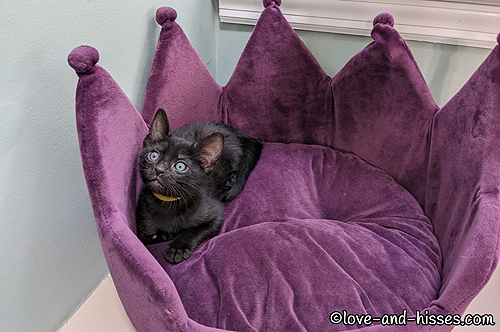 Gus is all “I could get used to this comfy crown bed!” 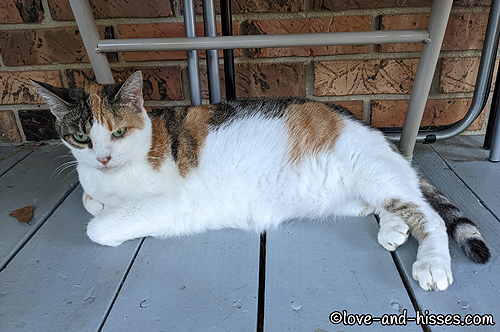 Alice Mo requests the presence of her DADDY, not ME. 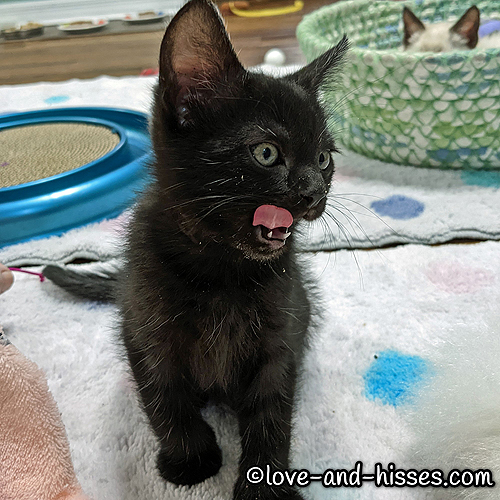 It’s Thlurrrpsday, and I’m wondering if Francesca got any of her breakfast IN her mouth, or is just planning to absorb it through her fur. 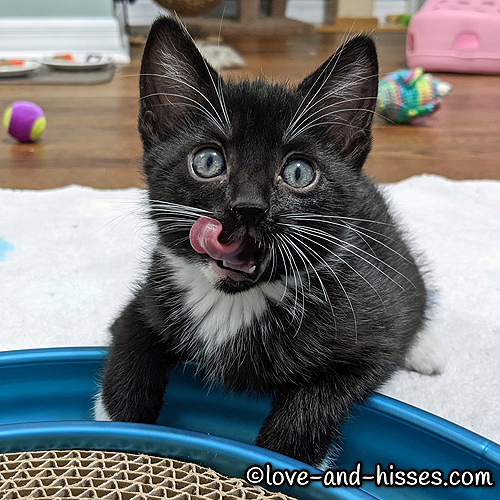 Did you hear that it’s Thlurrrpsday? It is, and Nacho has perfect form.

YouTube link
Throw Back Thursday: Someone recently reminded me of this video. From 2020, it’s Uncle Archie (permanent resident) in the fish taco truck, defending his turf from foster kittens the Mewsketeers. Those kittens just did not know what to make of him! 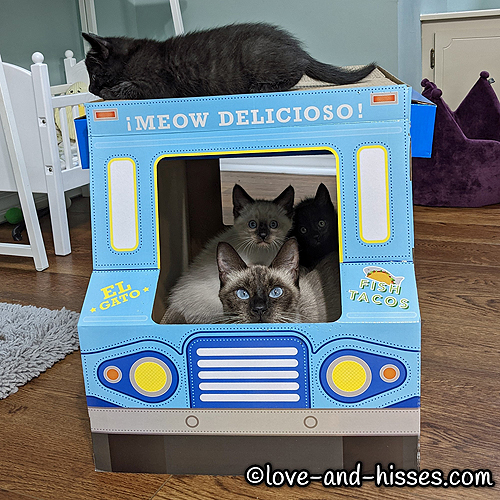 I’m sorry but would you L👀K at the guilty face on Lalo? I’m beginning to suspect there’s more being sold out of that truck than fish tacos. Is all I’m sayin’.

YouTube link
Someone sent us a new toy for the kittens – a rechargeable toy that spins and rolls and is kinda cool. Mike and Lalo are most interested in it, but the others are coming around! 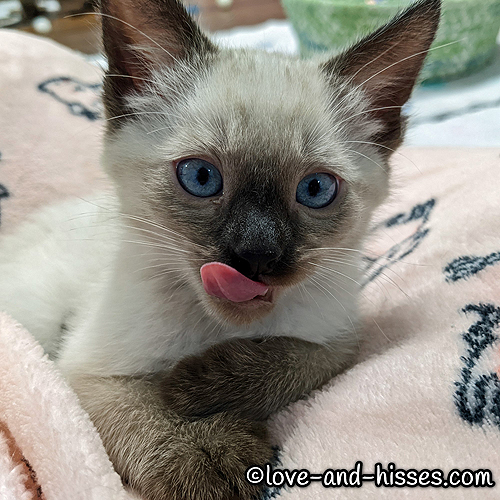 Lalo would like you to remember that it is STILL Thlurrrpsday, and he can thlurrrp with the best of them. 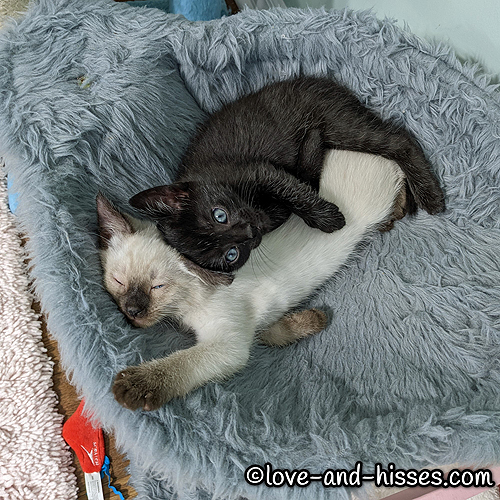