Question – I am presuming with the number of permanent residents and the number of fosters that the amount of food consumed is vast in quantity. How do you purchase/acquire your food? Buy in bulk? How so? Preferred food/brand?

With 12 inside and nine outside (strays, five of which are kittens), even the 24 count or 30 count packages from Chewy aren’t enough to hold us more than maybe a week and a half. Then figure in that I feed the outsides freeze-dried raw that I reconstitute for them … ouch goes our bank account. But I could not do less for anyone who comes to our porch!

Our fosters have a dish of Iams Kitten dry kibble available at all times, and in addition I feed them Fancy Feast canned food twice a day (the current bunch liked pate for a while, but now turn their noses up at it and prefer the shredded kind.) I stock up on everything when it’s on sale, and buy the canned stuff in bulk at Sam’s Club. Right now the fosters are going through the kibble very slowly and we’re going through about 6 cans a day of Fancy Feast (that will probably close to double as the kittens grow.)

The permanent residents eat Blue Buffalo kibble (I have tried switching them to a better quality food over the years and they are absolutely not having it), and between the 7 of them they eat about 5 cans of Fancy Feast per day. I buy their canned food at Sam’s Club too, and keep an eye on the sales and stock up if I see a good one going on.

Occasionally someone will send us some food off of our Amazon wish list (which I HUGELY appreciate) and last month we got a bunch of Fancy Feast kitten canned food that was donated to Forgotten Felines (which we also HUGELY appreciate), but I’m not going to lie – it is freaking expensive to keep everyone fed. If anyone out there has any tips on doing it more cheaply I am listening!

That Nacho picture in the bed looks like he’s in a little kitty swimming pool! It’s adorable.

Haha, it DOES! I had to go back and look, and then I laughed and laughed.

(Even funnier due to what appears to be a goldfish that jumped right on out of that pool, haha.) 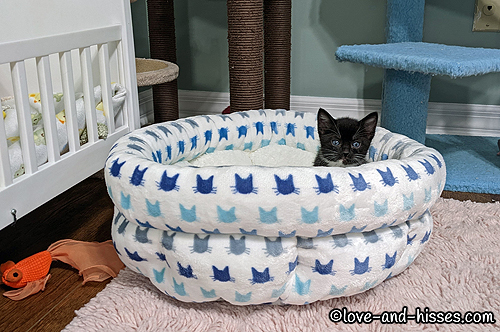 It really does (and I had not noticed the goldfish toy, how perfect is that?)

As you were asking Francesca “are you the baybee”, my Goober replied, “why yes, I am.” Cracked me up.

My condolences on your IT issues. It’s gotten so I almost hate technology as much as I appreciate it. Especially when something just suddenly changes, like your inbox stops showing the sender’s name and you KNOW you didn’t do anything to it (if for no other reason than you don’t know how).

The constant updating of stuff (when it was working perfectly well to start with) drives me CRAZY. Gmail loves to, every few years, do a big song and dance “Look! Look what we did! We made it better!” Um, no you didn’t, Gmail. You made it different and I DO. NOT. LIKE. (Also: Facebook. STOP MAKING IT DIFFERENT, it was FINE.)

If you’ve been a longtime Love & Hisses reader, one thing you’ll know is that mis-sexing a kitten is an integral part of the Love & Hisses brand. I mean, would it BE Love & Hisses if we didn’t mess it up occasionally? I think NOT. 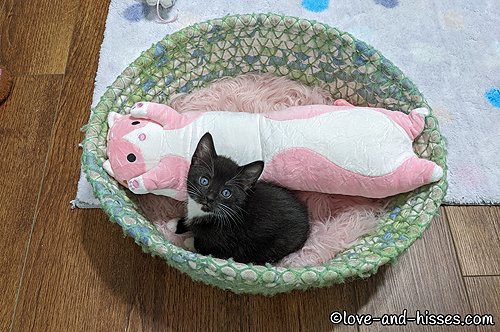 Nacho is a girl. Her “official” name is going to become Ignacia (the girl version of Ignacio, of course), and while I thought I’d start calling her Nacha (which is the nickname that goes along with Ignacia), I honestly don’t want to spend all that time backspacing when I mis-type it, so let’s just keep calling her Nacho.

(I guess this shows how little I look at the kittens’ back ends, doesn’t it? I mean, I glance at them to see if they’re clean, but that’s about it. It wasn’t until Nacho was lying in my lap getting a belly rub that I glanced down and thought “Huh. Well, you’re not a boy.” I have double-checked the other kittens, and Nacho’s the only one we mis-sexed.) 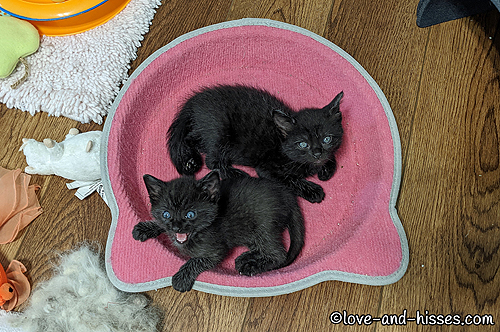 Mike’s all “I ALWAYS WANTED A SISTER!” And Francesca’s all “RUDE.” 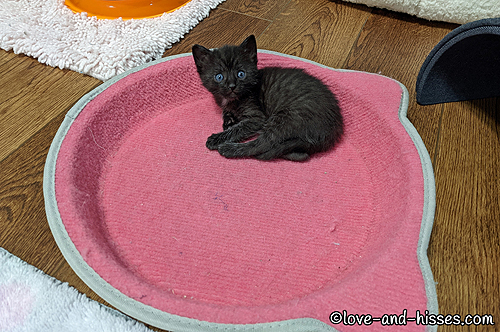 “Why’d she get all mad and stomp away?” 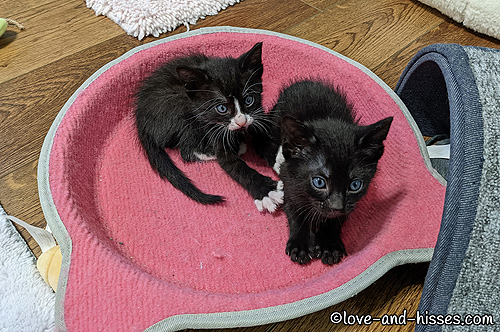 Saul and Gus are bowled over by the news, obviously. 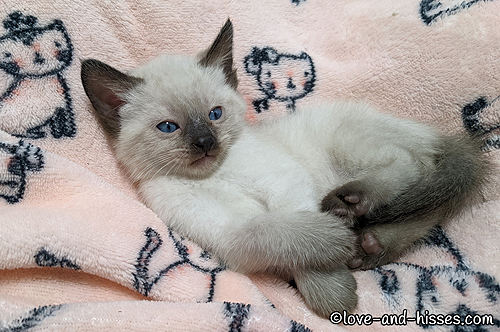 Lalo, in my lap, is too sleepy to care. 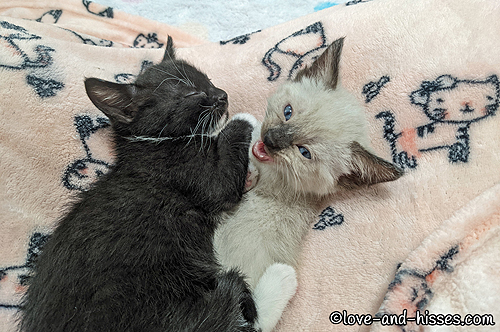 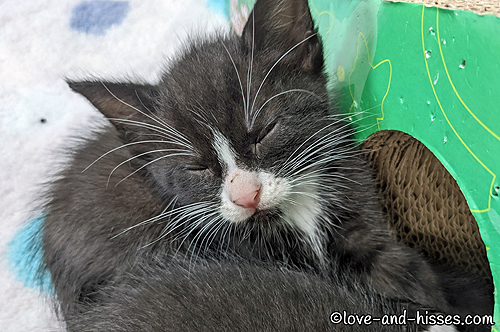 Saul has a snooze. (Yes, he got a scratch on his nose because he picked a fight with… someone. I don’t know who scratched him, but someone gave him the what-for.) 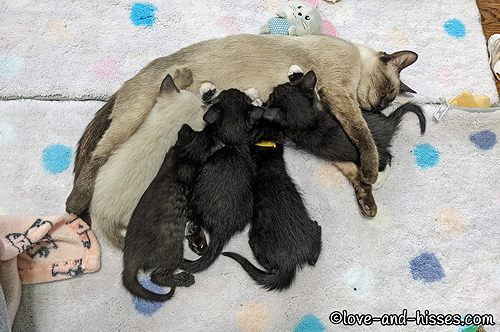 5 of the 6 at the milk bar (you guys have no idea how much time I spend counting kittens every day.) 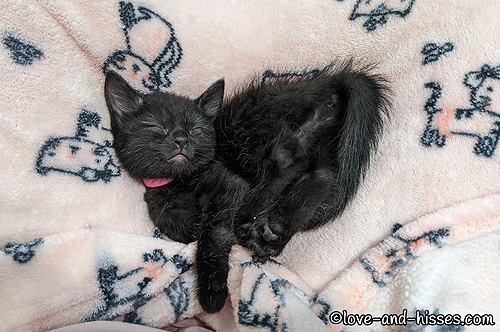 Francesca was sound asleep in my lap. 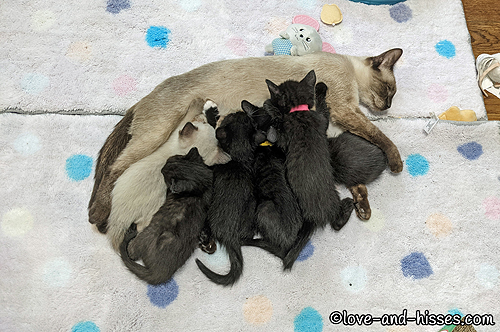 But woke up and joined the crowd when she realized the milk bar was in business. 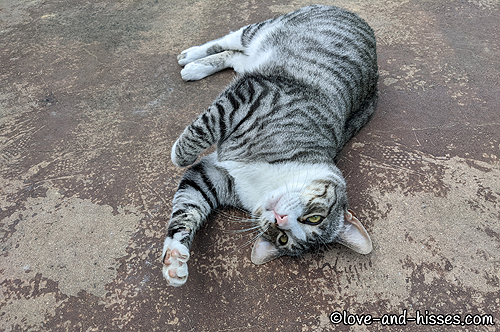 It was in the 60s yesterday morning, and it was HEAVENLY. Charlie spent his morning rolling around on the patio enjoying the weather. 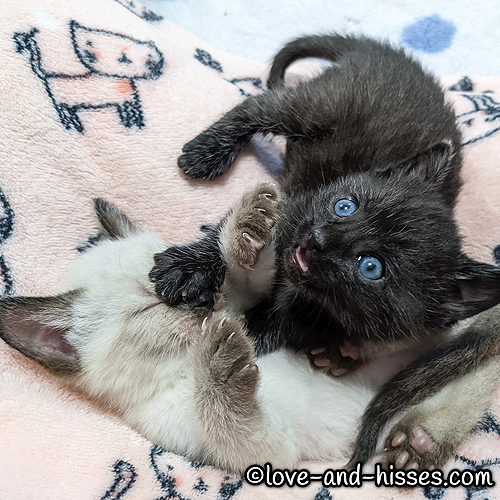 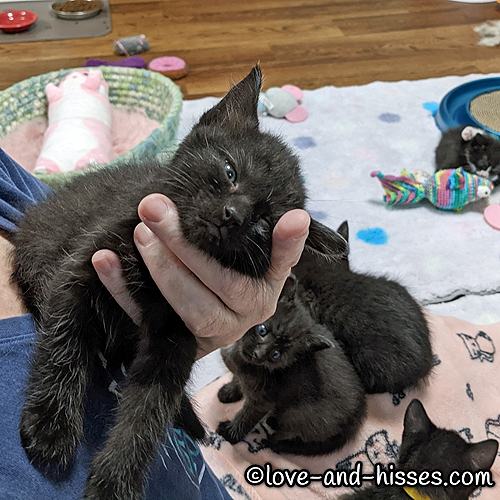 In case you thought Lalo was the only one who flops over into my hand and falls asleep like this, nope. Francesca’s known to do it, too. I must have a very comfortable hand.

YouTube link
Throw Back Thursday from 2020. When we lived in our previous house, the cats very often caught and brought chipmunks into the house (we had a cat fence around our back yard.) Fred and I would rescue them and take them back outside. In this case, the chipmunk was on the screened porch, climbing the screen, and Fred was trying to get it. I was supervising, and the chipmunk flew. at. my. FACE.⁠
⁠
Please enjoy this video evidence. (You may want to watch it with the sound on to fully enjoy the horror-movie scream. YOU’D SCREAM LIKE THAT IF A CHIPMUNK FLEW AT YOUR FACE, TOO.)

YouTube link
Throw Back Thursday: from 2016, foster kitten Juniper (from the Evergreens litter) was SO SURE she could reach that feather teaser. So close.. and yet, not close at all. 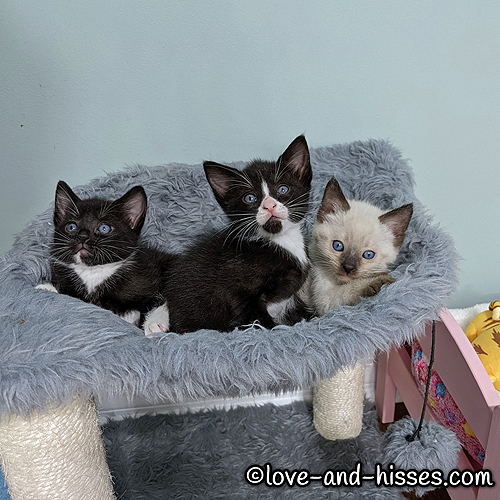 Nacho, Saul and Lalo really like that hammock (but those bright eyes indicate that they’re certainly not ready to go to sleep!)

YouTube link
Is Francesca da BAYbee? All signs point to yes! (And that she’s getting REAL TIRED, LADY of the question.) 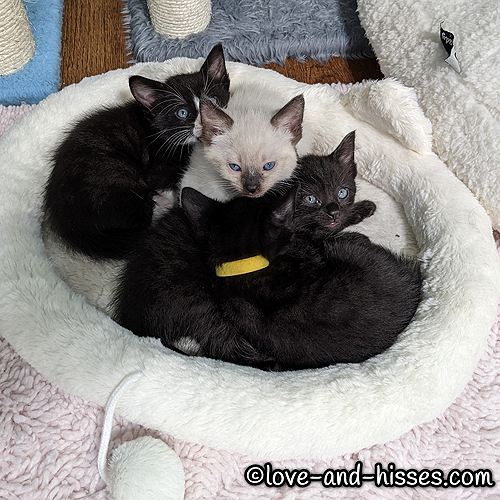 Good night innernets. (Saul, Lalo, Gus and Francesca.) (Mike was in my lap, and Nacho was following Kim around.)