And I’m glad you DON’T have a time machine, because if you hadn’t handed out your phone number, who knows what would’ve happened to Patty? That poor baby. At least now, whatever happens from here on out, she’ll face it in a warm, dry, safe, well-fed, and well-loved place.

This is very very true – I’m glad I did hand out my phone number! I’d much much rather have her here with me than with that family or even worse, left under the trailer.

We have a bottle fed kitten right now. Our neighbors found him? her (I can’t tell) under their porch during Hurricane Irene. Mama cat had a whole litter and she moved them but left this little guy behind. They watched for about an hour and Mama never came back and the poor little guy was wet and crying. They brought him over to us and I’ve been caring for him. He’s a feisty little guy and eats like a champ! I thought he was about a week old when we got him because his eyes weren’t open yet. they opened on Saturday. But his teeth are coming in and he weighs about 13 oz. so I think I am off on the age.

This is a good guide to aging kittens by teeth. Using their teeth to determine how old they are is (I believe) a more accurate way than by weight – as an example, there’s a 9 ounce difference between Charlie and Patty! (She’s doing her best to close that gap, though. Girlfriend can EAT.)

What kind of nail scratcher thingee is that? it’s all curvy and I love it! I’m using the cardboard box kind for Mackie. He just will not use an upright pole type scratcher. Well, other than the end of the sofa, I mean. But that curvy kind of scratcher looks like something he would like and it’s way more estheticallly pleasing than a cardboard box! That is a Grreat Choice Corrugated Scratcher. I got it back when Maggie was pregnant because the scratcher that was in the foster room – also by Grreat Choice – was so light that it would move across the room when she used it, and it was clearly annoying her. And we canNOT have an annoyed Mama, so I bought something heavier for her to use.

He is SUCH a talker. I try and try to get him to talk for me on video, but he absolutely refuses. I’ll get him one day, mark my word!

I have! I love that Reacher has acclimated so well after such a rocky beginning. I have to admit that when, for a little while, we thought Reacher might have to come back here, I wasn’t absolutely heartbroken at the thought, because he was pretty good with the Brady Bunch and well – you can always use cats who’ll put up with the shenanigans of little kittens! But I love love love that Reacher is so happy now. It was a long rough road, but he’s in a great home and clearly loves his brudder, so I’m glad I let him go! (Also glad that I get to see pictures of him from time to time!)

I have only had one gray tabby cat, and wonder if the brown tabbies are more common than gray?

I’d say brown tabbies are definitely more common than gray – we’ve had a ton of them come through here, but not very many silver tabbies. I’m sure that Reacher wasn’t our very first one, but other than Reacher, Rufus, and now Molly, I don’t remember any other silver tabbies. Oh, wait! Of course. Maddy’s a silver tabby! How could I forget? Here she is, little and grown up: I swear I’m not a SKIMMER but where did you get the little kitty bed frame? I want a couple for our cats!

That’s an Ikea Duktig doll bed, and if like me you live nowhere near Ikea (there’s one in Atlanta, but I’m having a hard time convincing Fred to make a 5-hour one-way trip to Ikea, go figure), you can occasionally find them on eBay!

Do you remember how much that license plate rooster was by chance? I would love, love, love to find something like that near me.

I wish I knew – we didn’t ask, and there was no price on it. I’ll keep my eyes peeled next time we get up there (which probably won’t be for a few months) and if it’s still there, I’ll ask (or make Fred ask, heh).

Duckies! How are you going to keep them from flying off when they get bigger? Trim their feathers? Or are you just going to count on them lovin’ your spoilin’ ways to keep them close by?

My grandmother had ducks when I was little (a mallard pair that she named Donald and Daisy). For the life of me I can’t remember how she kept those ducks from flying away. Do you have to do something to prevent that from happening?

The guy we got the ducks from told Fred that Rouen ducks (that’s what these are) don’t fly. I was skeptical, but just now Googled it, and apparently it’s true!

Rouen is another popular domestic breed that closely resembles a mallard duck when fully mature. Unlike its smaller cousin, the mallard, the Rouen is too heavy to fly. They are said to be calm in nature. They originated in France and came to America around 1874. (source)

I’m glad to hear that they’re calm in nature!

Are you sure that poor little Patty and Charlie are really siblings? Charlie is so much bigger!

I’m pretty sure, given their teeth, their resemblance to each other, and most importantly their reaction to each other – they curled up together almost immediately, and Charlie is pretty protective of her. It’s not unusual to have such a big difference in size in the same litter. When I got the Spice Girls, Clove was about half a pound smaller than Cori, and don’t even get me started on tiny Beulah from The Seven.

I made Fred proofread my post, and he misread that the same way! I half expected that some of y’all would read it that way – I know that every time I say a kitten is “peering around” someone misreads it as “peeing around”, and so when I type “peering”, it always makes me giggle.

Did you ever find out from the vet how old they probably *really* are?

I didn’t even ask, actually. I set their date of birth at August 1st, which I think is probably pretty close to how old they are.

And where does one get those mousies with the long tails from, lady?

That is a most excellent question. I get mine at Petsmart, but I can’t find them online anywhere.

Oh, scratch that – I found them (amazingly enough) on the Petsmart web site, here.

“His little girlfriend”??! Was Alice aware of this?

Fred and Alice practice Polycatmory. She knows he has other girlfriends, and if any men come along who strike her fancy, she’s free to snuggle. (She won’t, though. She’s really a one-man girl. But she’s secure enough in her felinity that she’s willing to share.)

does he have a touch of loony jake face???

I think maybe Buddy (the former Bobby Brady) does have a touch of the Loon to him! 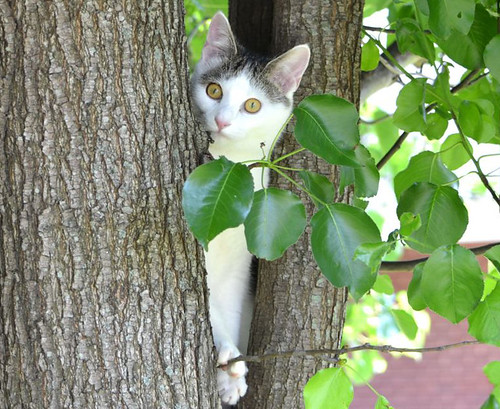 Must have rubbed off when Buddy was our foster!

Don Corbione…snork! Is all this going to his head or is he just averagely vain, like all cats?

(Kerry referred to Corbie as “Don Corbione”, which made me laugh out loud!)

Corbie is as un-vain as they come. He has no idea how beautiful he is. You’d think that, as often as I say “Hello, gorgeous!” to him, he might realize that he’s pretty darn pretty. But no, it just hasn’t sunk in yet.

Question, what do George and Gracie protect the chickens from? Racoons? Rats? Also, do they protect the pigs too?

Hawks! Before we got George and Gracie, we lost several chickens to hawks, unfortunately. Since we got them, we haven’t (to my knowledge) lost a single one. Of course, they protect them against raccoons and rats and snakes, too. They kind of protect the pigs; though they don’t have access to the pig yard, the pig yard borders the back forty on two sides, so if the dogs hear anything big out in the woods, they go to the fence nearest the sound and bark and bark. (At this point, though, the pigs outweigh at least Gracie, if not George, too, so they could probably take care of themselves.)

And whatever did you do to her when she was little that Sheriff Kara worries so about you being outside?

The Sheriff is just a born worrier, so she worries. It’s her nature!

The ducks are very cute. Do they need a permanent sort of lake or something in order to thrive? Do you have something like that? What do the chickens and pigs think of the ducks?

I think they could make do with kiddy pools, but we are actually having a pond put in at the back of the back forty! A big one – I’m calling it a mini-lake – that should be more than big enough for the ducks. Now watch – we’ll probably have the driest Fall and Winter ever, and the stupid thing won’t fill up!

P.S. In the future ideal world, no one will ever again sell animals–only adopt out–and no one will do backyard breeding or puppy or kitten mills. If only that world would come to pass.

That would be truly wonderful!

You know what, I got such a kick out of the STAIRS (in AND out of pool!) for those little ducklettes!! That’s just so cool I can’t stand it! 🙂

Wasn’t that a great idea? All Fred’s work, of course!

Charlie and Patty Peppers are doing okay. They got their bath the night before last, which they withstood in silent resignation. They look better than they did, but they’re still kind of a mess. The cuts around Charlie’s mouth are still healing, and Patty’s still got the goopy eyes. They spend most of their time sleeping and eating, but they do seem brighter-eyed and more interested in what’s going on around them than they did.

I’d like to hear their voices – thus far, I’ve only heard Patty meow once (on the way home after we picked her up), and haven’t heard a peep from Charlie. Charlie does like a good belly rub, but Patty’s a bit scareder, poor baby. Patty in the front, Charlie in the back (yes, this IS after they had their baths. Like I said, they’re still a mess.) That looks like a baleful look, but he was actually purring and kneading the air. Patty and her big ol’ belly. I think he was keeping an eye on Patty. “You give me back my brudder, lady.” Sally, Everett, and Harlan, hanging out. Oh, how this thing drives him crazy. Everett, a blur in mid-air. A moment of Corbie. “I go with you to get groceries, Mom. You don’t get the right cereal.” Truly, it’s a rough, rough life for the Corbs.