When I posted Friday’s blog, the kittens were still all… 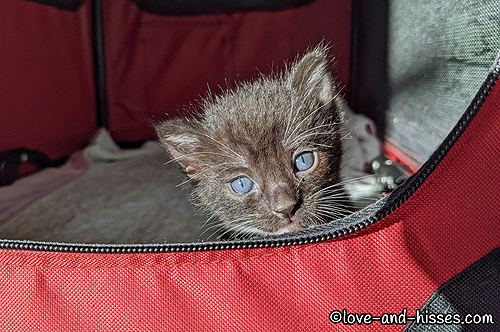 “We is not sure we want to come out there, lady.” (Nacho)

Saturday mid-morning I walked into the room and Francesca was coming out of the crate. “I’m so glad I got to see the first kitten leaving the crate!” I said to myself. Then I looked to the right and saw Kim, with Mike bellied up to the milk bar. In other words: MIKE was the first one out of the crate, followed shortly by Francesca. 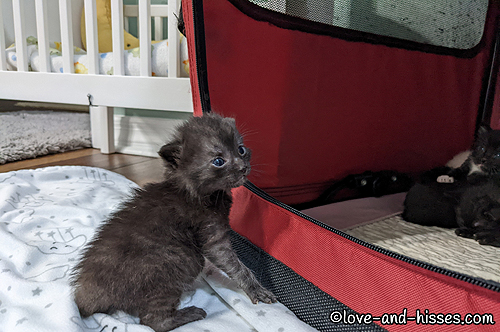 Mike was all “Guys, come on. It’s kind of interesting out here!” 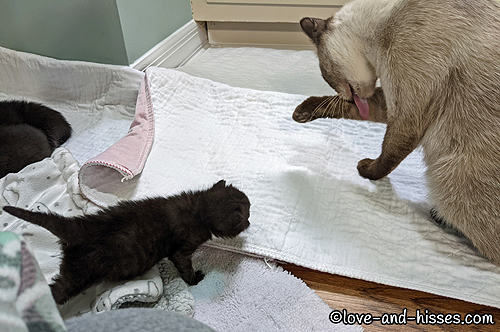 Then he headed back to the milk bar. 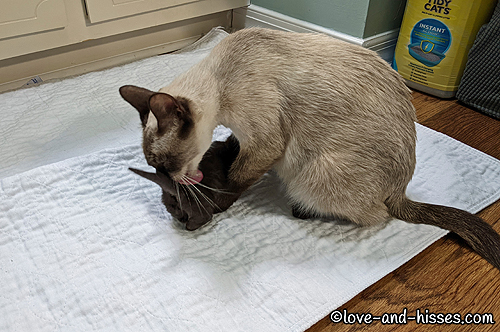 Which doubles as a walk-through shower, of course.

I put down washable pee pads everywhere, and when I came into the room a couple of hours later, everyone was out of the crate. I guess someone just had to break the seal. 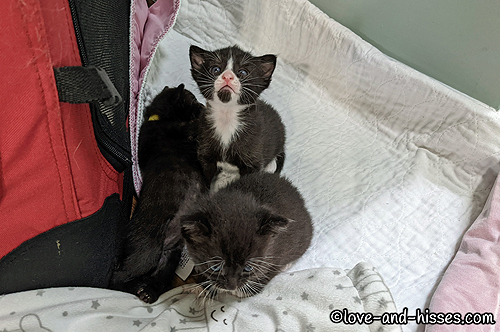 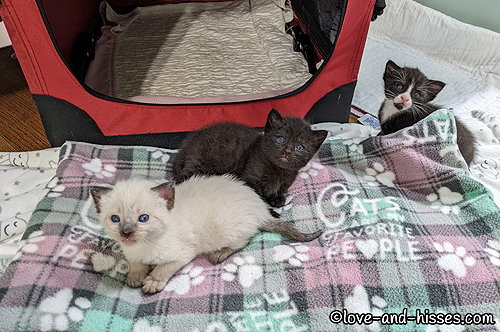 I put them back into the crate (so they’d know where it was) and they came right back out. 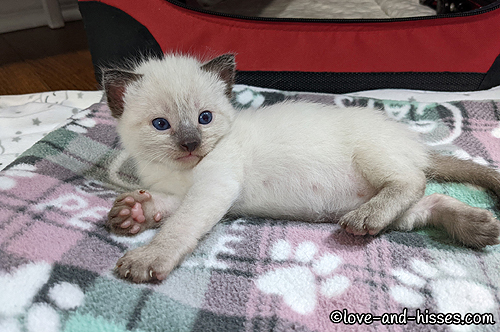 Lalo found it all very comfy. 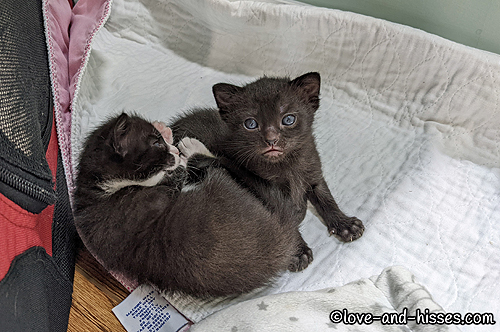 Saul and Gus had a tussle. 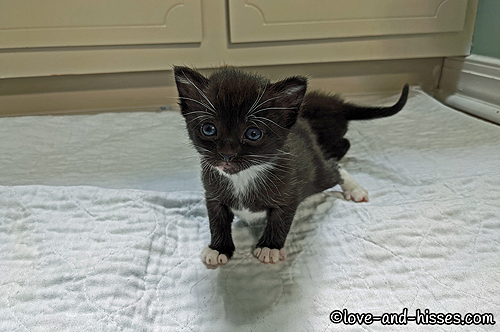 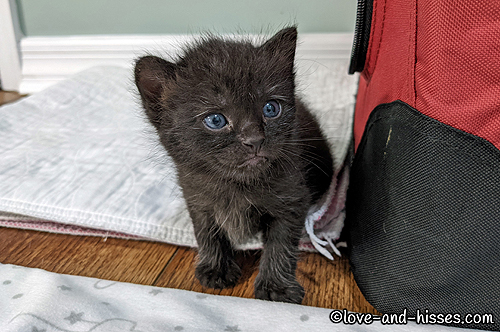 Francesca had a think. 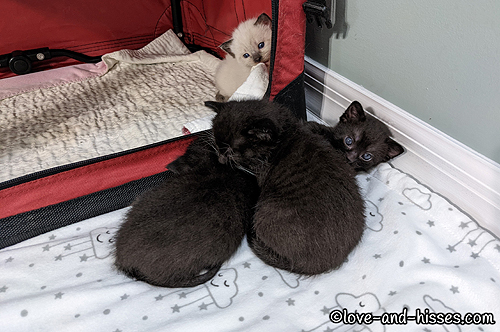 I opened the side of the crate and pushed it against the wall so that the kittens could easily enter the crate if they wanted (the side is a larger opening and also lower, so would be easier for them to go in and out). 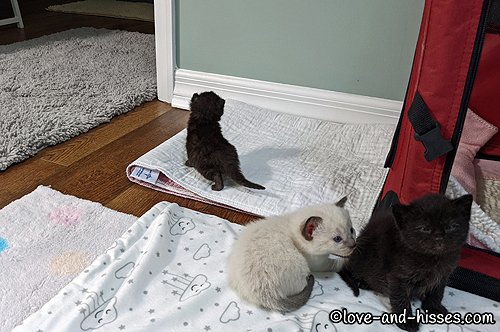 Mike checked out the view. 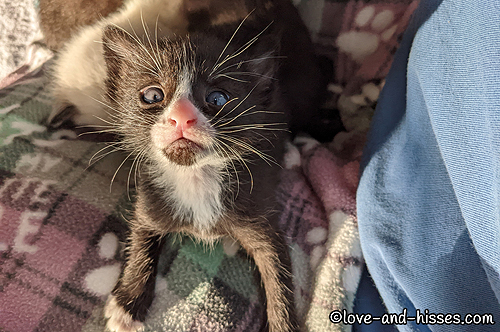 And Saul gave me the crazy eyes.

I set up litter boxes Sunday morning, and when next I entered the room, someone had peed in one (I don’t know for sure who, but I suspect it was Gus. Just a feeling – I could be wrong.) The kittens haven’t been back in the crate at all (there’s a camera in the crate so I was able to see that no one had entered), so I’m going to give it another day and then probably take the crate out of the room.

The kittens are pretty much sticking to the area where all the pee pads are (around where their crate is), though I’ve seen one or two venture onto the bare floor and then back again.

The best part of the kittens leaving the crate is that I can go in, sit down, and they climb into my lap. Sure, it’s because they know I have a bottle and at this point they’re all interested in the bottle, but even when I go in without a bottle, they’ll climb into my lap and stay there for belly rubs, kisses, and snuggles. They are JUST. SO. CUTE. 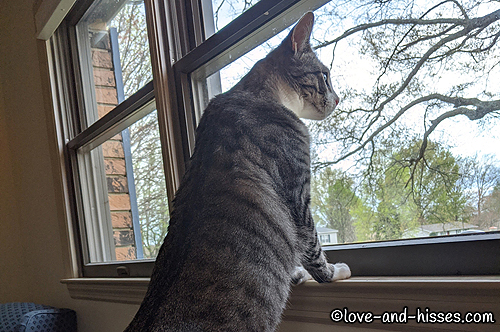 Charlie checking out the birds on the front lawn. 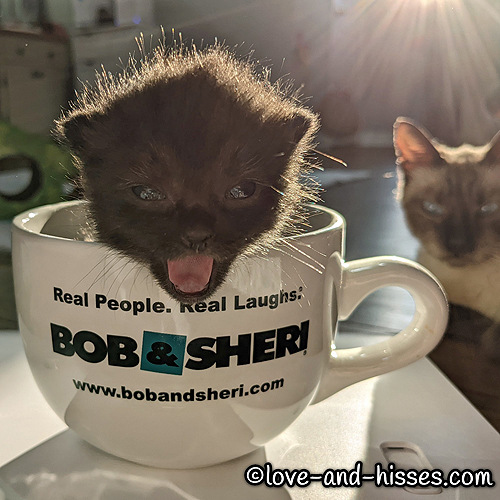 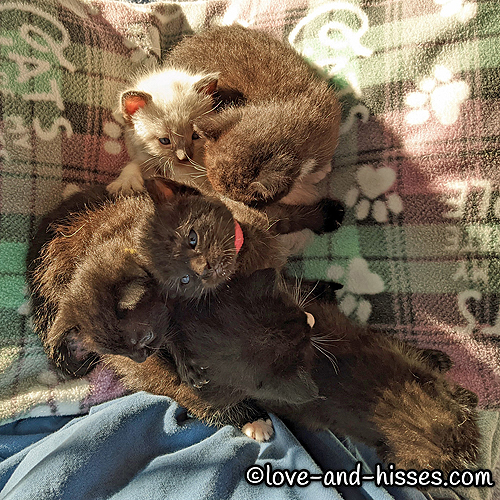 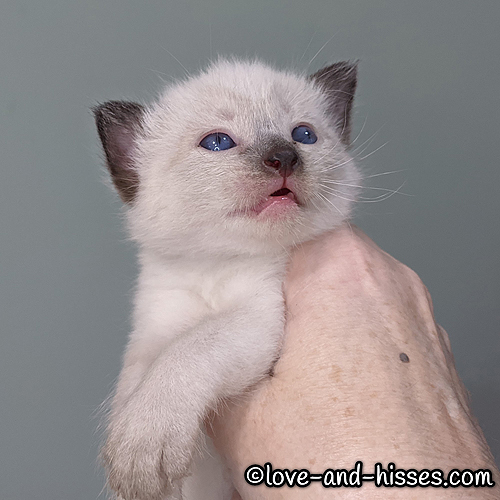 YouTube link
Kittens at the milk bar – is there anything sweeter? I think NOT. 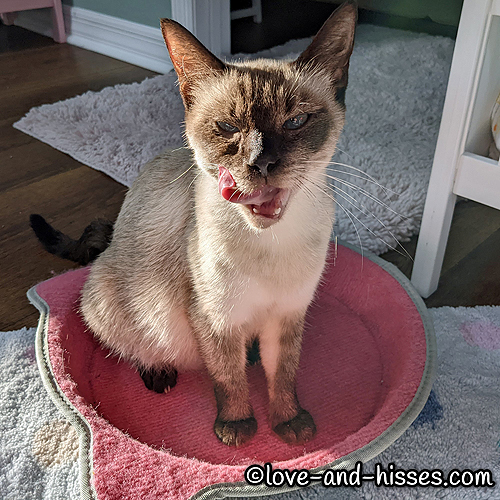 A thlurrrping Mama pie! (My favorite!) 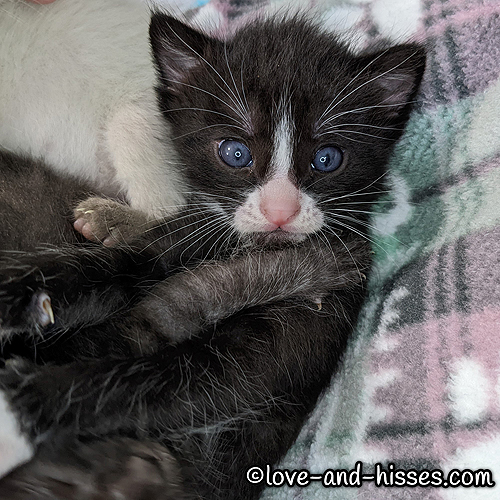 Good night innernets. (Saul, and a little bit of Lalo. And that’s Mike’s front leg stretched across Saul, and a bit of Mike’s little face in the lower left. They might have been tussling more than getting ready to settle down for the night, is what I’m saying.) 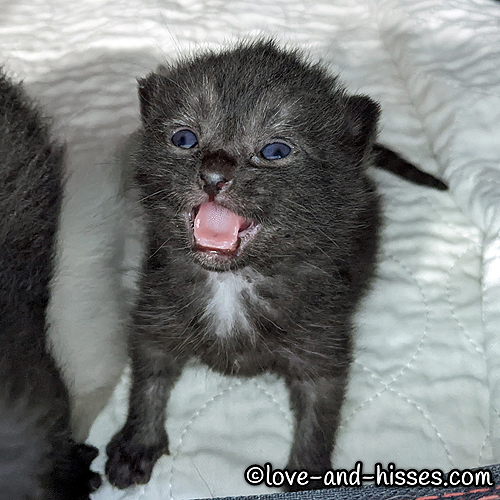 Mike’s all “LADY. WHERE YA BEEN? I NEEDS MY BOTTLE!” 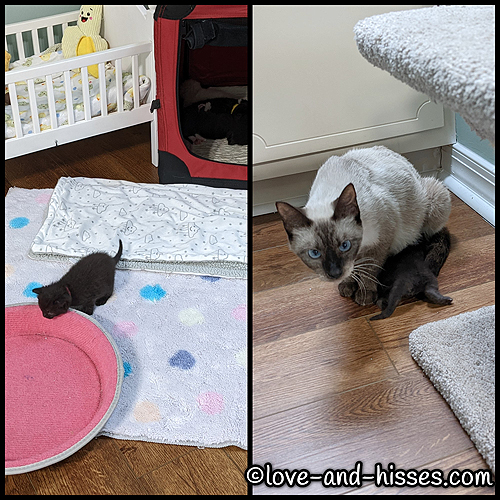 BREAKING NEWS: the kittens are leaving the crate. I repeat: THE KITTENS ARE LEAVING THE CRATE.⁠
⁠
I walked into the room just as Francesca (left) walked out of the crate. I thought “I’m so glad I happened to come into the room at just the right time!” ⁠
⁠
But then I stepped forward and looked to the right to find that Mike had ALREADY left the crate and tracked down the milk bar!⁠
⁠
I guess they had a Kitten Meeting and decided it was time to investigate the World Beyond the Crate! 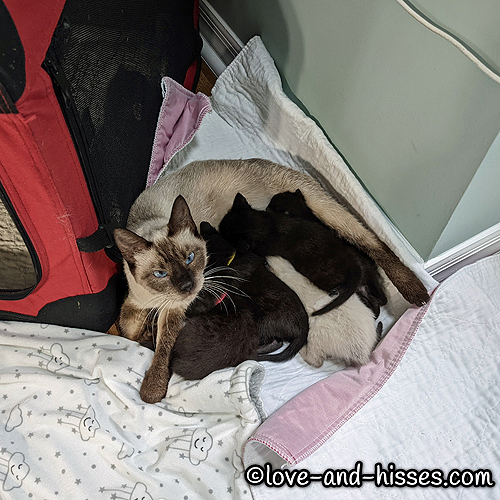 After I walked into the room a couple of hours ago to find that Francesca and Mike had left the crate (scroll up to see that post), I put down washable pee pads everywhere and then put the escapees back into the crate (I always do that at first just in case their leaving the crate was by accident. I don’t want them to be stuck outside the crate if they’d rather be in it.) Just now, I walked in to see… EVERYONE was out of the crate and bellied up to the (very defiant looking) milk bar.

YouTube link
The kittens left the crate this morning, and now it’s just a free for all. I went in to give Mike his bottle, and Lalo climbed right up into my lap. Except for Ignacio (Nacho, the tuxie who doesn’t have the white stripe on his nose), these kittens are big, big fans of the bottle.⁠
⁠
PS: “Slippery lips” is what I call the maneuver where a kitten moves his mouth back and forth on the nipple before latching on. 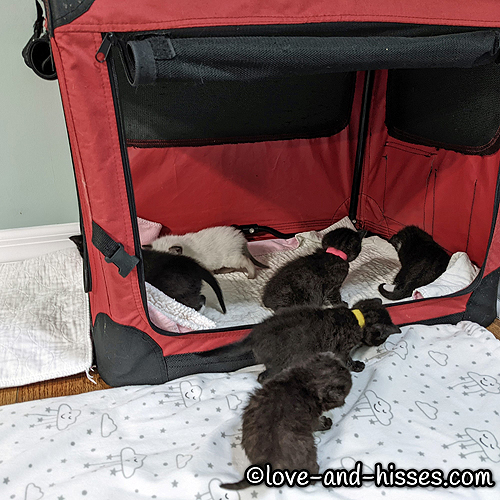 In the interest of making sure the kittens could get in and out of the crate (if they wanted), I opened the side of the crate and pushed it against the wall. Then I put them all in the crate (so they’d know where it was), and they sniffed around and came right back out.⁠
⁠
Sometimes kittens will return to the crate to sleep; other times once they leave the crate they have no desire to return. These guys are showing every sign of being the latter, though we’ll see what they do tonight. 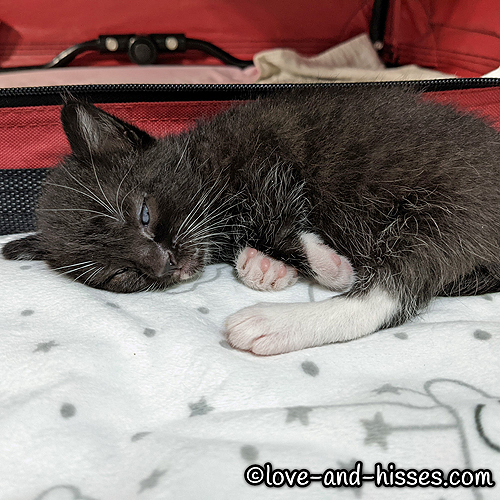 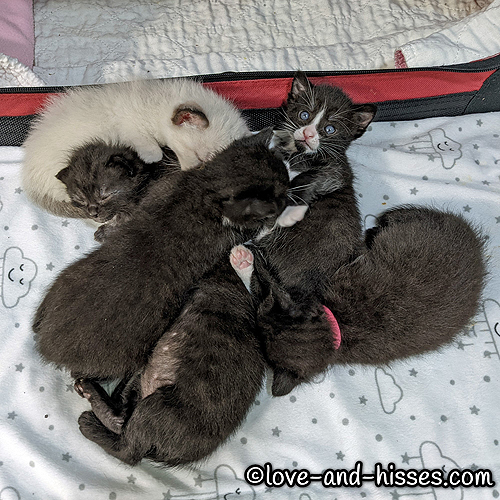 I walked in this morning to find them piled up in front of the crate. If that’s not a pile of cute, I don’t know what is. 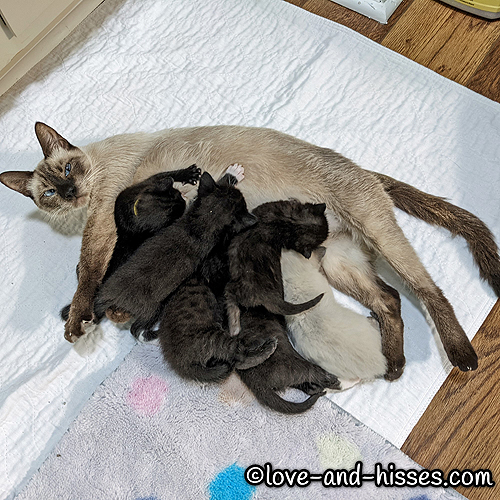 Milk bar on demand. The kittens have no complaints! (And honestly, neither does Kim. The kittens aren’t venturing far from this corner yet, so all she needs to have some quiet time is retreat to the middle of the room.) 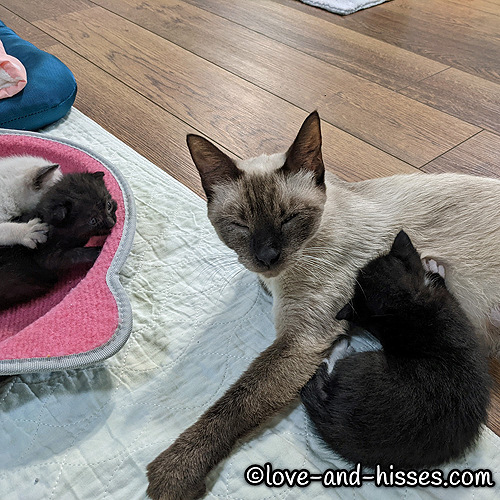 If the milk bar won’t come to Nacho… 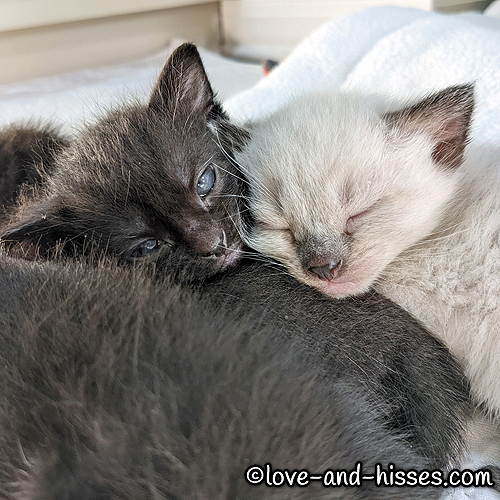