If you aren’t on social media, you missed the big news: we have an add-in to this litter. A tiny kitten was found in a hay bale, yelling his little head off. He needed a mama (and siblings), so he came to us and so now we’ve got a 6th kitten, and his name is Mike! He’s a little black kitten with a tiny white locket (and a white spot on his belly.) He’s 4 days younger than the other kittens (he turned 1 week yesterday) and about half their size. I didn’t actually intend for him to immediately become part of the litter – I was going to bottle feed and slowly introduce him to Kim, but she had other ideas. I supplemented him with a bottle for the first few days, but by yesterday morning he was actively refusing the bottle, so I’ll offer him the bottle for another couple of days (and keep an eye on his weight) before stopping completely.

(I have offered the bottle to the other kittens, and they’ve all made the MOST disgusted faces and turned away. FINE.)

As of now, as far as he (and Kim… and the other kittens) are concerned, he’s always been a part of the litter. 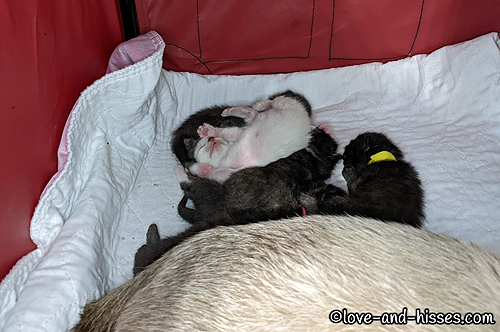 Lalo the kitten is an awfully chill boy. He loves to roll around on his back. 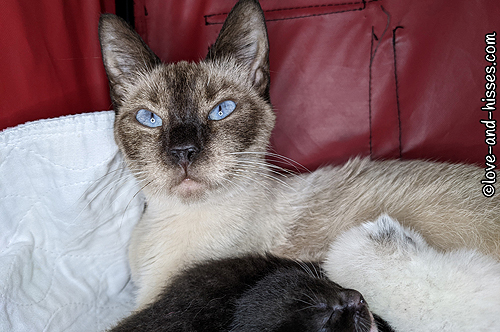 Kim’s keeping an eye on me. 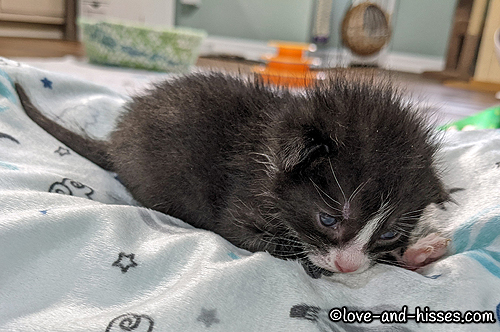 Saul doesn’t quite get this “weighing” thing, but he doesn’t protest too much. 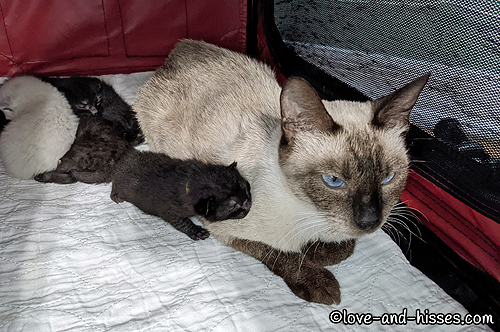 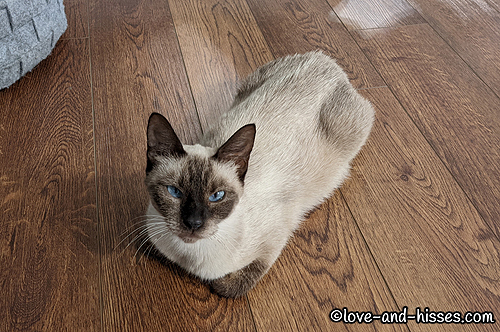 Mama takes a moment to herself. 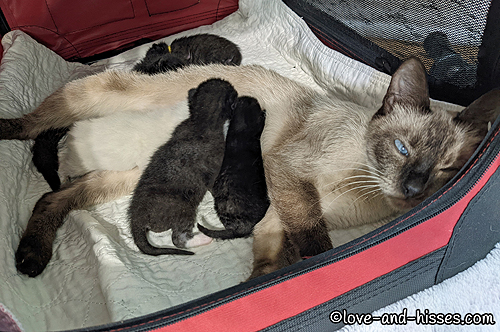 And she’s back at it again. At the milk bar: Saul (the largest kitten) and Mike (the smallest.) Are they going for the same nipple? But of course. 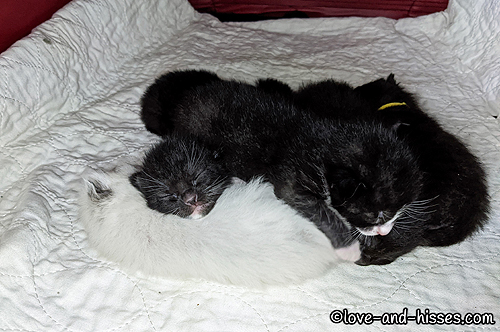 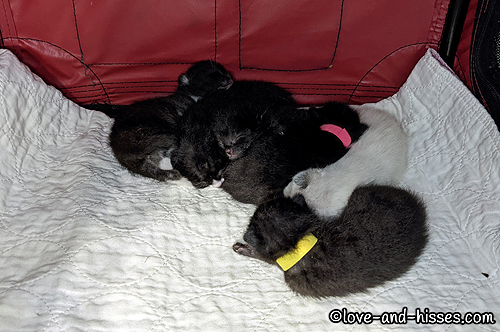 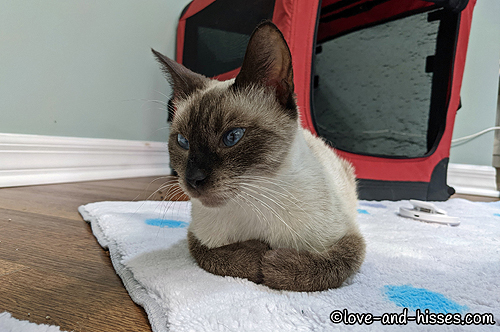 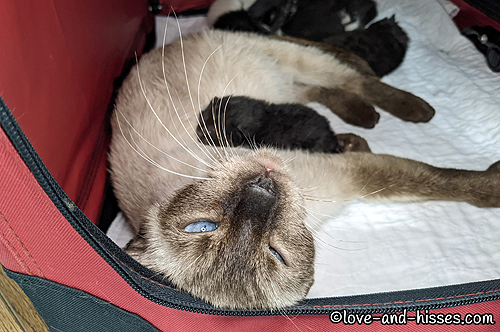 “A mama’s work is never done.” 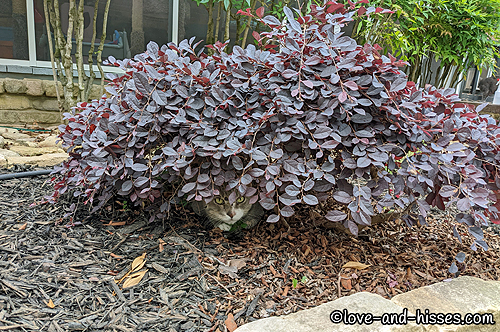 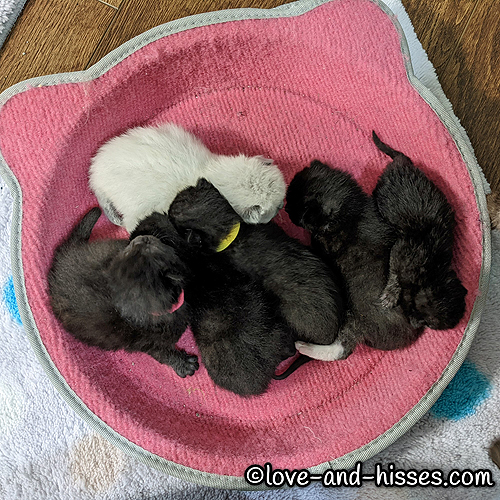 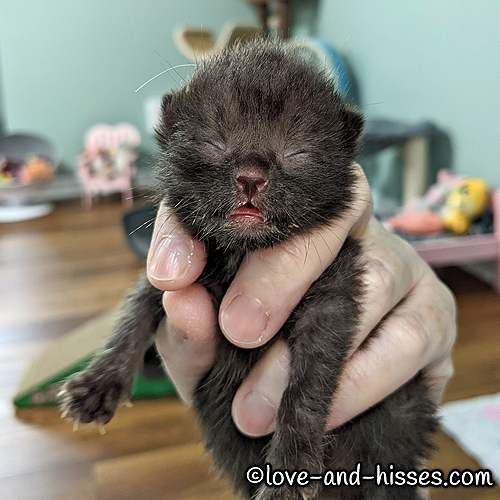 People of the innernets, you may or may not have noticed in the kitten pie picture from an hour ago that we now have 6 kittens. Say hello to Mike.⁠
⁠
Mike was left behind on a hay bale, needed a mama and siblings, so came to us yesterday afternoon. My intention was to have him in a carrier in the room, bottle feed him, and slowly introduce him to the others.⁠
⁠
Kim had other ideas. ⁠
⁠
I walked into the room with him and she said “GIVE that boy to me.” I put him in the crate with her, and she groomed him and presented the milk bar to him. He was a little too hungry to figure out this brand new strange-smelling mama cat, so I bottle fed him, and when he was full and calmed down, I put him in the crate again. She groomed him, pottied him, and he climbed onto the pile of kittens and went to sleep.⁠
⁠
He’s a bit younger than the others – they’re 9 days old today, he’s 5. I am supplement feeding him, not only to reduce the load on Kim, but also because the other kittens are twice his size and can easily shoulder him out of the way at the milk bar. I know he is nursing some, but until he’s perfected his fighting skills, I’ll keep on supplementing him. Better to be safe than sorry!⁠
⁠
He’s all black with a tiny white locket. Right now he’s so much smaller than the others that I have no trouble telling which one he is, but as he grows he may get a collar.

YouTube link
Mike has opinions! This video was shot about 10 minutes after I got home with him – he’d just had a bottle, and Kim was anxious for me to GIVE HIM to her. She is just the best mama.

YouTube link
Mike is an excellent eater. I love a bottle baby who knows how to latch on immediately! (Mike is nursing from Kim, but he’s smaller than the others and they can easily elbow him out of the way at the milk bar. Since I’m not sure just how much milk he’s getting from her, I am supplementing every couple of hours.)

YouTube link
Mike is small, so he fits pretty well at the milk bar!⁠
⁠
In the first section, he is kicking his feet in the air, and pushing at Lalo (the siamese mix kitten on the end.) In the second section, he’s right in the middle of the pack – Francesca (pink collar, rolling around on her back) actually uses him as a little pillow for a moment. 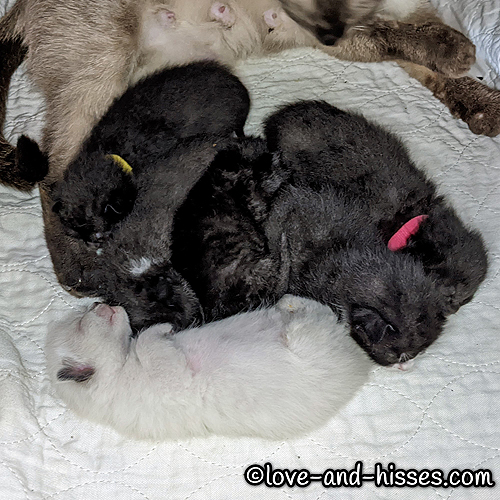 Good night innernets. (It’s not the best picture, but if you look closely, you’ll see that Mike is directly in the middle of that pile. Every time I go into the room, that’s where he is – right in the middle!)

YouTube link
Breakfast is served! That’s Mike next to Kim’s front leg, and please note that he is NOT letting go. He’s a tenacious little guy. 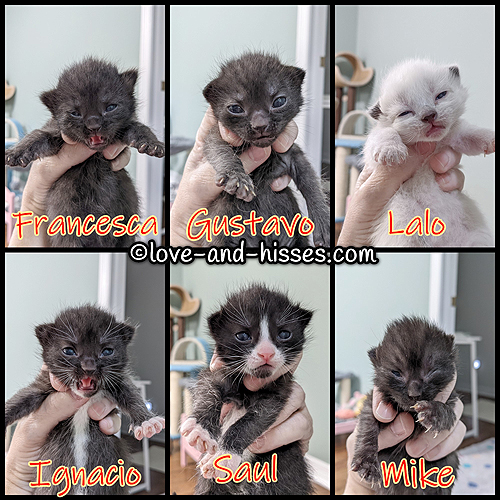 Eyeball check! The original 5 have eyes that are (mostly) all the way open (Francesca’s right eye still isn’t all the way open just yet.) They’re 10 days old. Mike decided to pop one eye open, but he’s still thinking about whether he wants to open the other one. He’s 6 days old. 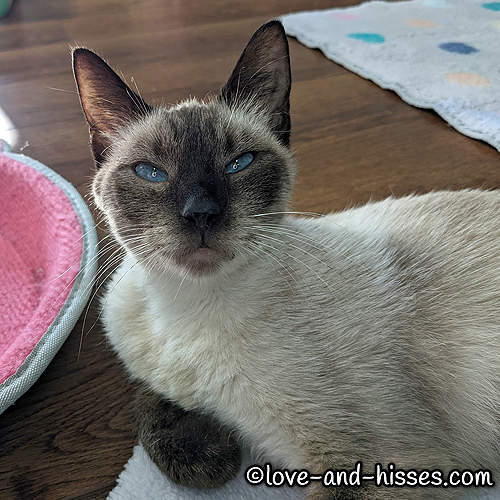 In the comments to the picture I posted a few days ago where Kim was yawning, someone asked if she was yawning or mad (they thought she might be hissing.)⁠
⁠
Let me tell you what: this cat is the SWEETEST. She’s never once hissed or growled at me. The worst she’s done is look mildly disappointed in whatever it is I’ve chosen to do – usually making a kitten cry by picking it up to weigh it, or taking all of the kittens out of the crate to change out the soiled bedding, which causes them to complain. She loves being petted, sweet-talked, and doesn’t mind a kiss or two. I can’t tell you what (aside from hearing kittens cry) she DOESN’T like, because she is just so sweet with her non-stop purring and kneading. 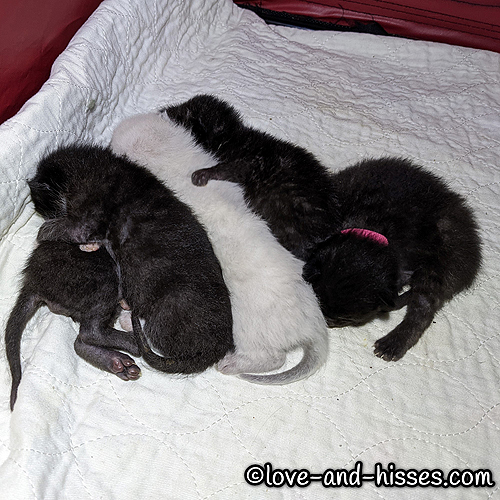 Good night innernets. (That’s Ignacio on the bottom of the pile, and then (from left) Saul, Lalo, Mike and (pink collar) Francesca. Mike’s little leg flung across Lalo’s back is THE SWEETEST.)

YouTube link
In the first part of this video, you can see Mike fighting it out with Gus, trying to get to the good nipple. In the second part of the video, you see that (much like his namesake) Mike has figured out how to work smarter, not harder. ⁠
⁠
(I am still offering Mike the bottle, but he’s rejected it the last couple of times. I’m going to continue to offer it for at least another couple of days – and am weighing Mike obsessively to be sure he’s gaining – but I think he’s a mama’s-milk kinda guy.) 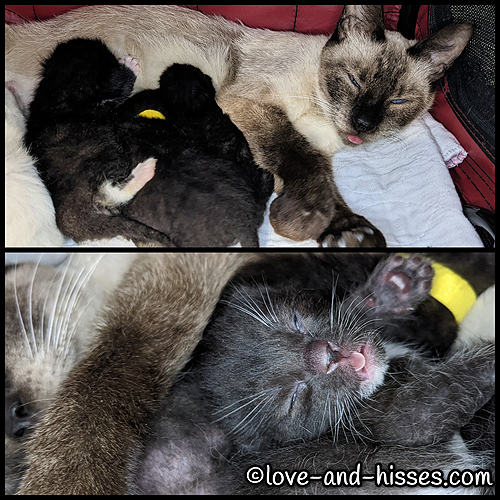 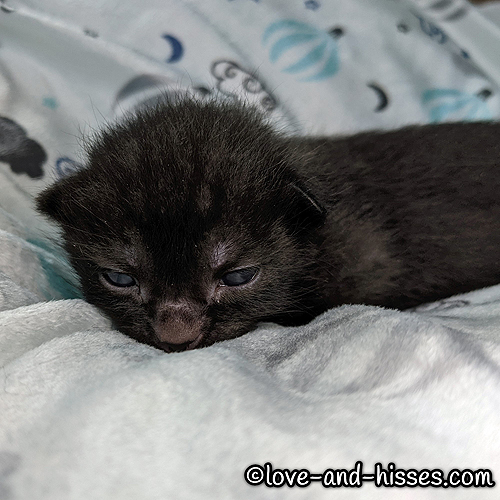 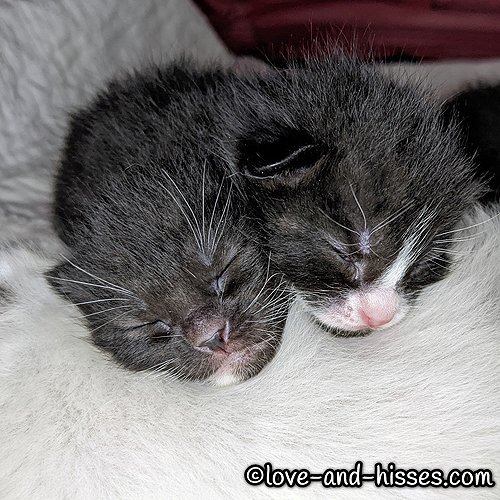