We had a very active weekend! On Friday evening, Ian and Angus were adopted (together!) and went home. They are now Obi (Angus) and Luke (Ian), and there’s already been an update (scroll down to the social media section for that.)

On Saturday someone came to meet Brianna – and then ended up adopting Marsali instead! (He was coming to meet Brianna, but wasn’t dead-set on adopting her. And Marsali, being a super-friendly lapkitten, charmed him. She’s no dummy!) Because he lives about 90 minutes away, he was pre-approved and was able to leave with Marsali. She is now Dolly Parton and joins new sister Janis Joplin, who is a few weeks younger.

And then a few hours later, I got word that the couple who came to meet Jocasta a few weeks ago did want to adopt her. They were previous Forgotten Felines of Huntsville adopters (though they hadn’t adopted any of my fosters before), so they were automatically approved, which made for a fast adoption. She’ll be renamed, but they’re going to wait to see what name suits her.

So yesterday evening I took Jocasta to Petsmart to meet her new family, and also took Lizzie, Jenny, Brianna and Roger to the cat room. Since there have been no inquiries about them at all in the past few weeks, it seems clear that they’re not going to get adopted sitting here at my house. Therefore, they need to be where people can see them, so off to Petsmart they go.

(Yes, I know it isn’t ideal. Obviously we always want fosters to be adopted straight from here, but that isn’t happening. They are extremely well cared for by Forgotten Felines of Huntsville volunteers while they are at Petsmart – and they are still Forgotten Felines cats; Forgotten Felines handles the adoptions, all Petsmart does is house them and provide food and litter.)

There has already been an application for Roger, so hopefully that will work out; I’ll keep y’all updated, of course.

Today’s post includes the last pictures of the ones who have been adopted. 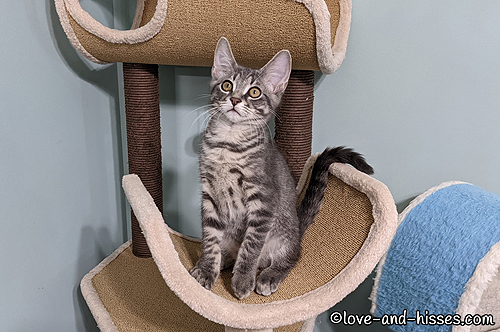 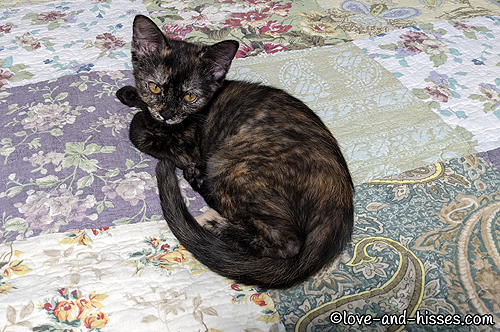 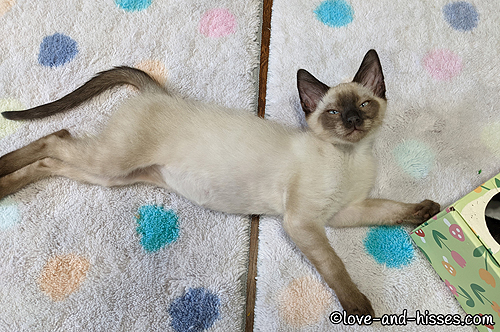 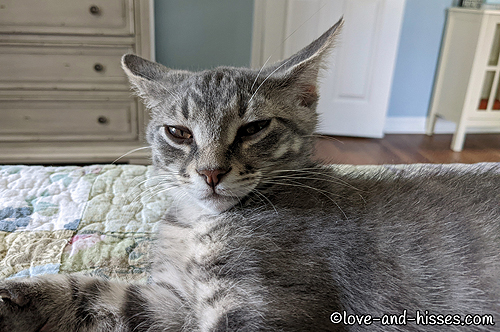 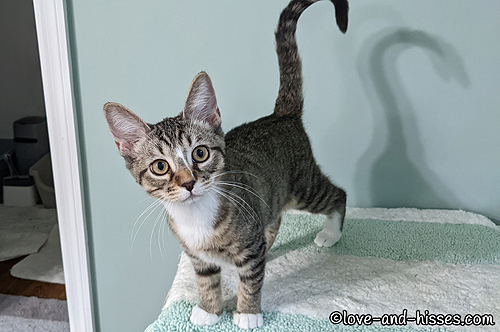 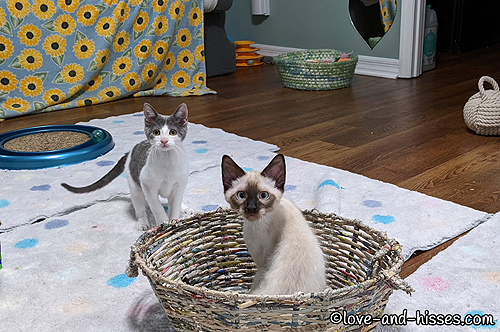 I don’t know what I did to make Brianna and Ian look at me like this, but I’m sure it was something! 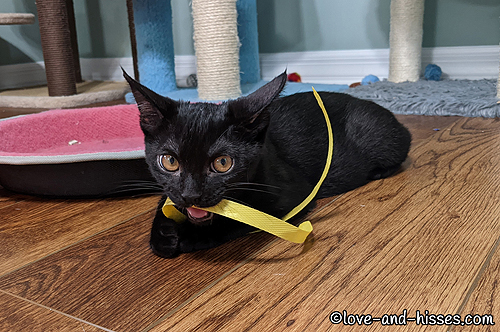 Lizzie and the packing strap. 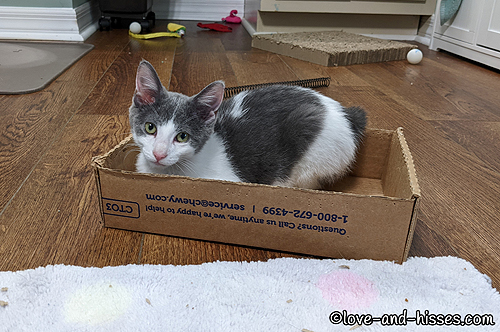 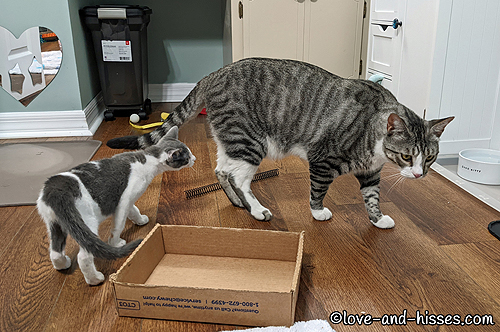 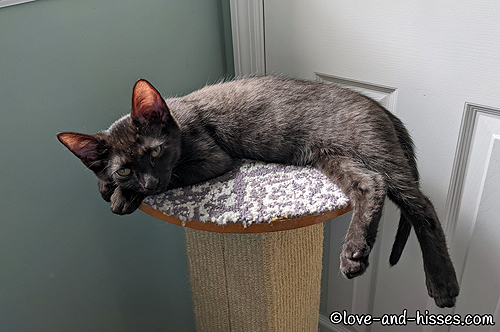 Roger’s small, but he’s getting lanky too. 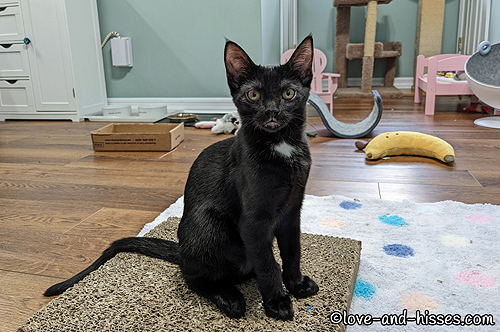 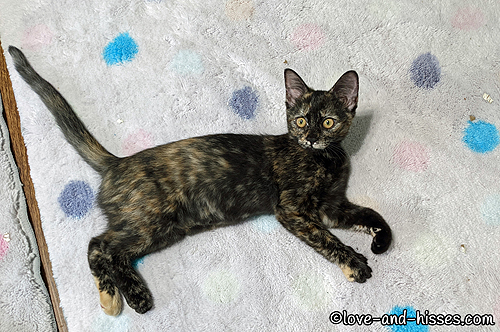 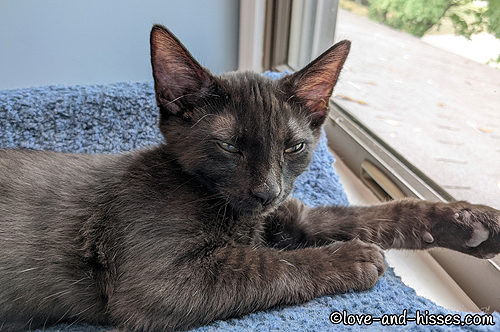 Roger is just as soft and plush as he looks. 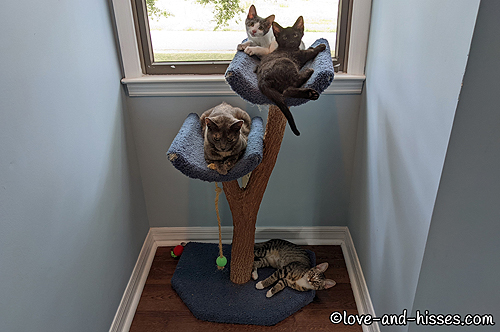 Loaded cat tree – Brianna and Roger on the top level, Jocasta on the next level down, and Marsali at floor level. 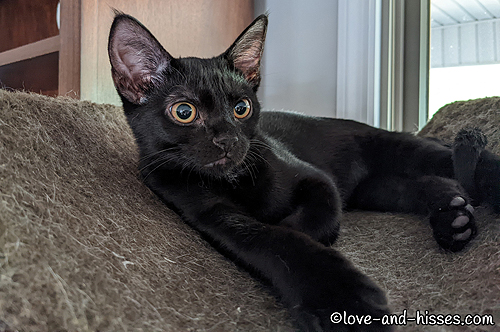 Charlie went thundering through the house and Lizzie got the dark eyes of “What was THAT?!” 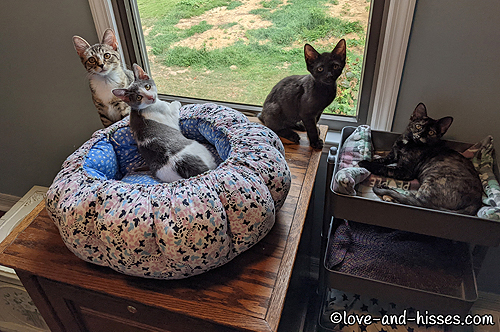 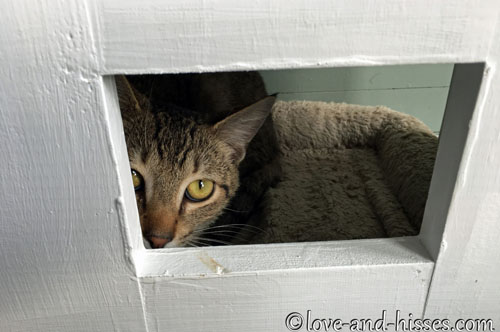 An old picture of Dewey, peeking out from the wall condo at Crooked Acres. 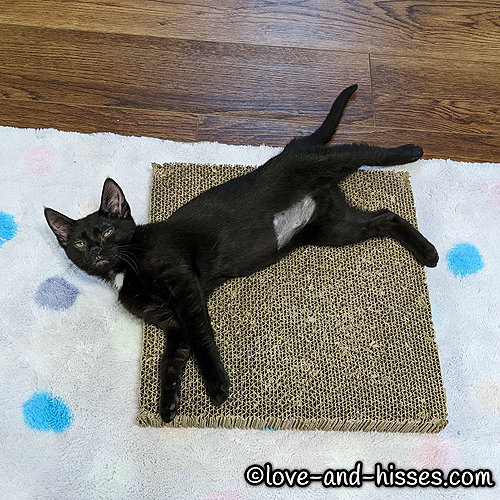 Lizzie loves to show off her belly. 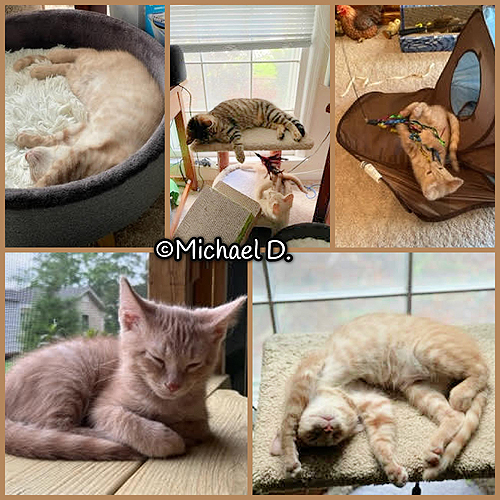 Look who it is! That’s Jamie, looking pretty darn happy. Michael says:⁠
⁠
He’s been great, an absolute joy to have around! I’ve taken to calling him Jack-Jack. He’s just having a blast racing around and playing with all the toys. Henri was shy with him at first. But they’ve become buds now. I think Henri looks at Jack-Jack as the baby. He’s very careful not to step or land on him when they play. It’s quite funny to watch. He just kind of taps him and runs away. So they end up chasing each other back and forth. They both love those collapsible cubes. Diving into and onto those things chasing the toys or each other.⁠
⁠
And I think Yuengling accepts him as well. Jack-Jack doesn’t try to pounce her the way Henri did when he got here. Jack-Jack just kinda brushes her as he goes past. Just giving her a little kitty hug. Sleeps near her in her own special hideaway. She doesn’t seem to mind him being close to her at all. That’s saying something for her!⁠
⁠
I think we all wore Jack-Jack out playing with him constantly the first couple days he was here. About Tuesday I think it was, he slept all day about. We’d try to wake him to play and he’d just roll over and put his paws over his eyes, saying “Not Today!” Haha. He’s into more of a normal routine now, with play time and nap time all day.⁠
⁠
I got him in to see [the vet] for a checkup and she and the entire staff gushed over him. So he’s going to be a hit there as well.⁠
⁠
(Thanks, Michael!) 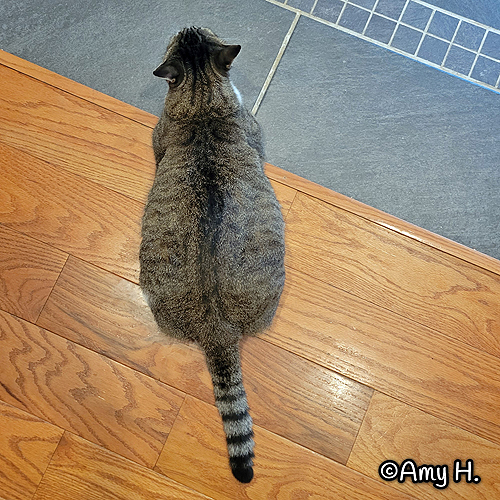 Look at Mimosa! She’s a little rounder these days (now that kittens aren’t sucking the life out of her.) Amy said: ⁠
⁠
She’s doing great. She finally slept in bed with me last night for the first time. She’s always the first to let me know that the food bowl is empty and there’s a door closed somewhere. Love her so much.⁠
⁠
(Thanks, Amy!) 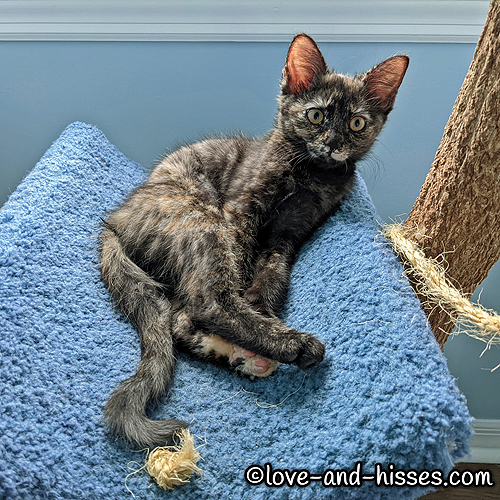 Jenny’s either thinking about something important, or thinking of nothing all; I’m not sure which. 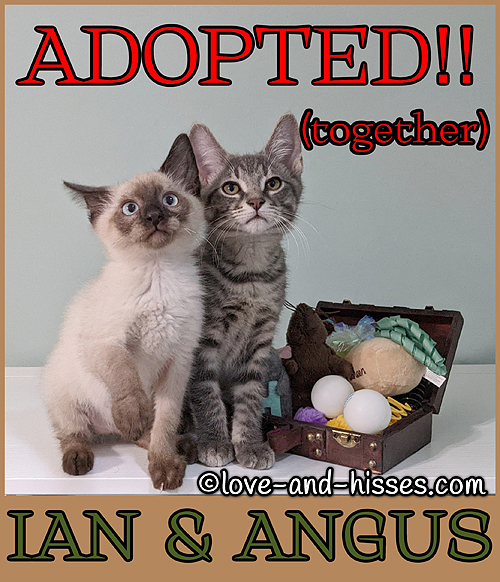 Hooray, hooray, Ian and Angus were adopted (together) today! They join a wonderful family with other kitties to play with, and some (human) sisters to play with, too. 😻 Ian is now Luke, and Angus is now Obi!⁠
⁠
Happy life, sweet boys. ❤️❤️❤️ 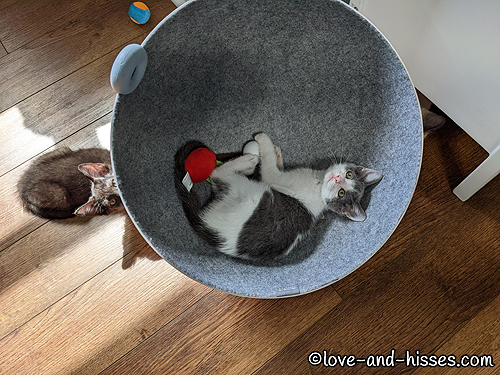 Good night innernets. (Brianna, with a photobomb from Roger) 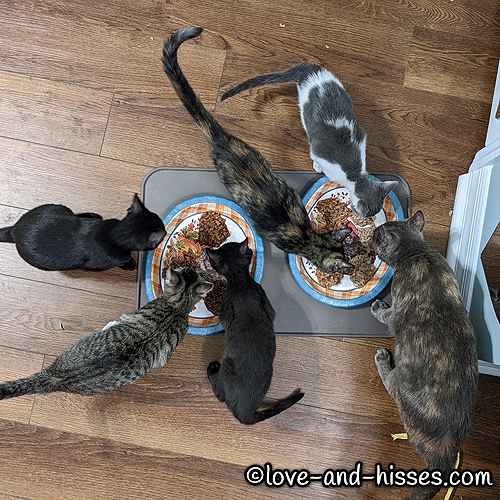 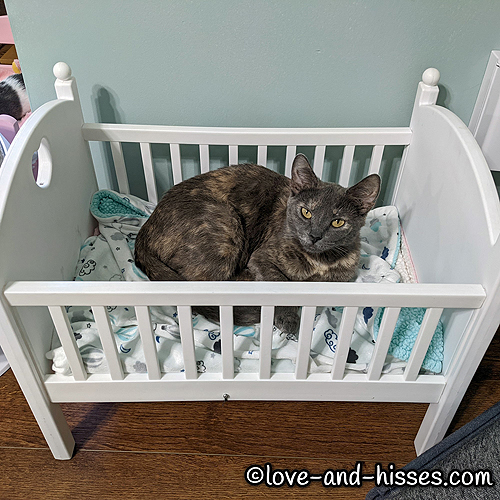 Jocasta says “I have raised my kittens – now it’s time for ME to be the baby!” 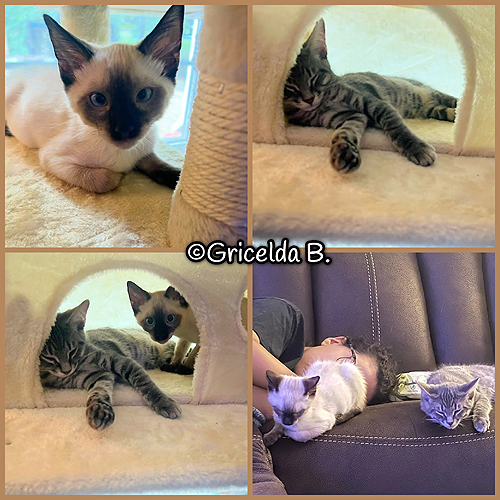 Look look look who it is! It’s Luke (formerly Ian) and Obi (formerly Angus), who went home just last night. I love how relaxed and comfortable they are already, enjoying their new cat tree and napping with their sister on the couch! ❤️⁠
⁠
(Thanks Gricelda!) 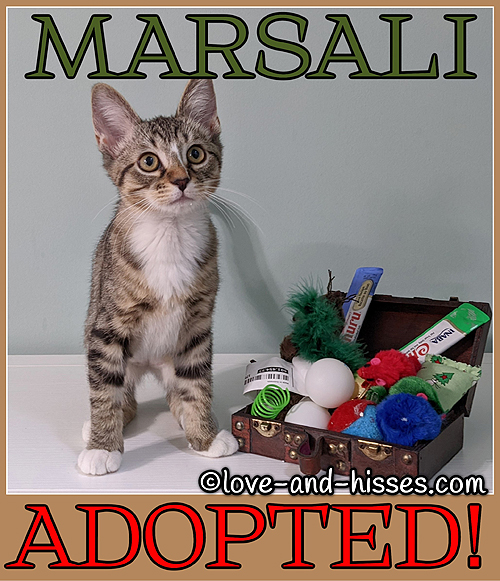 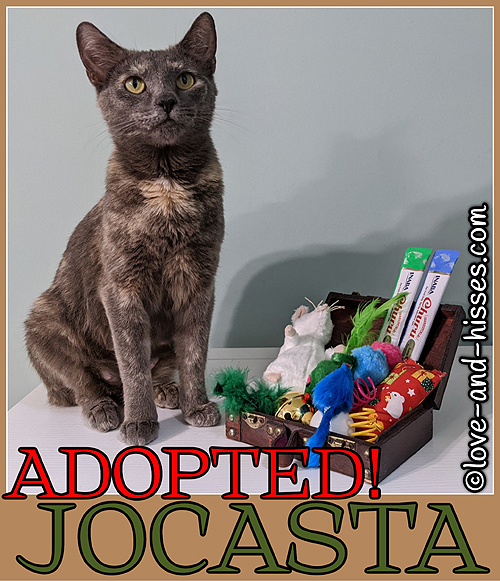 Hooray, hooray, Jocasta was adopted today! She will be renamed (they’re going to wait and see what name fits her), and I have a suspicion she is going to be spoiled ROTTEN (as every mama deserves!) Happy life, sweet girl! ❤️

YouTube link
It’s been an adoption-filled weekend (Ian and Angus were adopted together Friday; Marsali was adopted yesterday afternoon, and just a few hours later mama Jocasta was adopted), but on Friday morning, before any of them went home, Uncle Charlie came for a visit.

You’ll note that Jocasta was calm but alert. The visit was short and there were no incidents.

YouTube link
Yes, the kittens were comfort nursing right up ’til the end – not for long, and not very often. Jocasta wasn’t really producing any milk, but she enjoyed it as much as they did.

YouTube link
Lizzie purring, and Lizzie (begrudgingly) talking. She is the CUTEST.⁠
⁠
(She is also still available for adoption. Email Forgotten Felines of Huntsville at info (at) ffhsv.org to inquire. We are located in Huntsville, Alabama.)