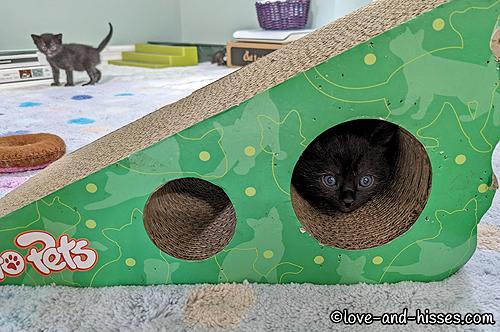 Francesca in the tunnel scratcher, and Gus in the background, all “Wait, we can do that?” 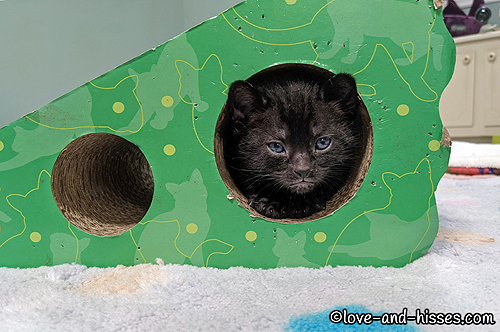 Gus in the tunnel, not sure whether he likes it or not. 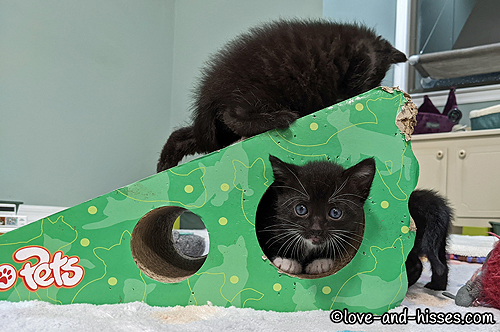 Nacho finds the tunnel awesome. (Nacho finds most things awesome, to be fair.) 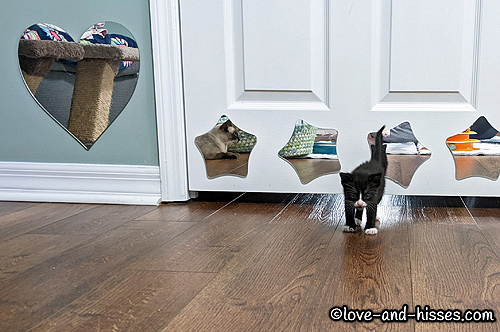 Saul coming back after checking out the door. I love that you can see Kim in the mirror (the far left mirror on the door) keeping an eye on him. 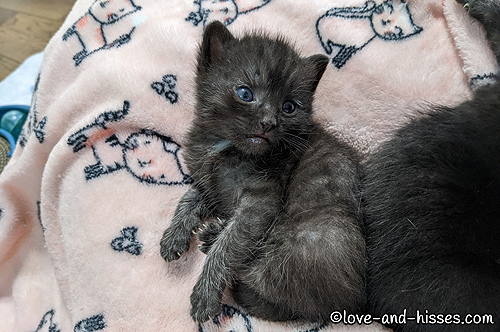 Mike, having had a bottle, considers a nap. 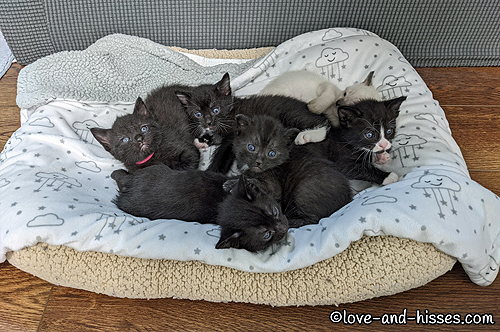 Everyone opted for a nap! 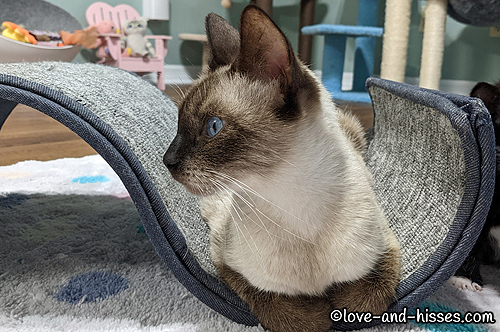 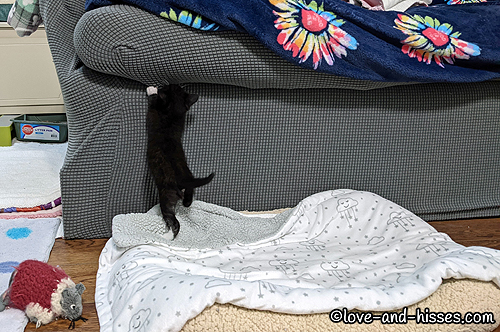 Saul decided to try climbing the couch. (He didn’t get far, but I suspect it’s not going to be long before I walk into the room to find him asleep on the couch.) 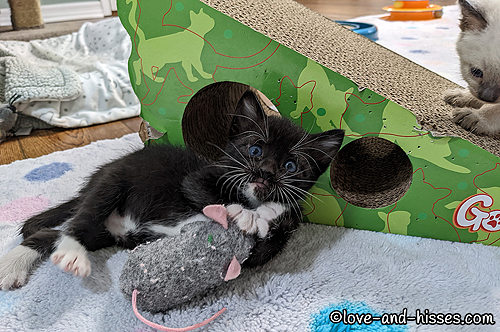 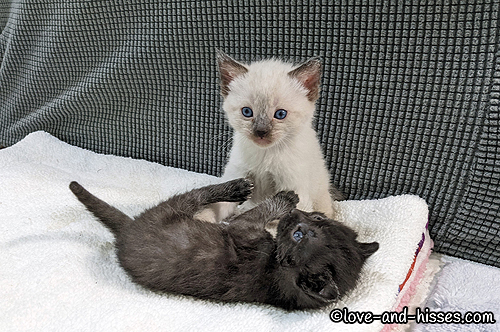 Lalo considers his next move, and Mike waits patiently. 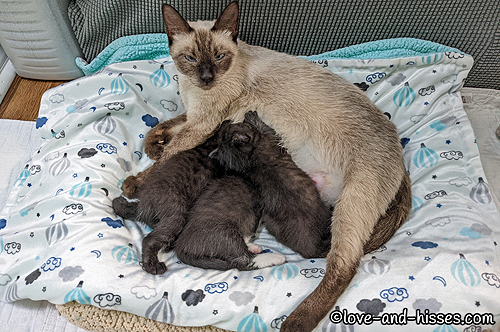 Francesca, Saul and Mike at the milk bar.

I honestly thought that the kittens might start eating over the weekend, but nope – except for Francesca who might have eaten a little on Friday (see video down in the social media section). They’re still all about the milk bar and the bottle, though I’ve seen Lalo and Mike sniffing around the food bowls. My contribution to getting kittens to eat on their own is to keep the plate of canned food full most of the time. I rarely have to do anything to get kitten interested in food when there’s a mother present – her example is usually plenty. I’m sure it won’t be long. 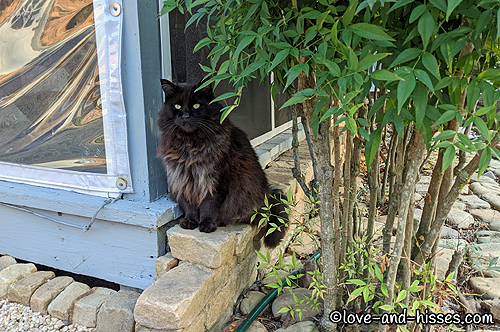 I’m feeling a little judged by Khal (who is continues to be fabulous). 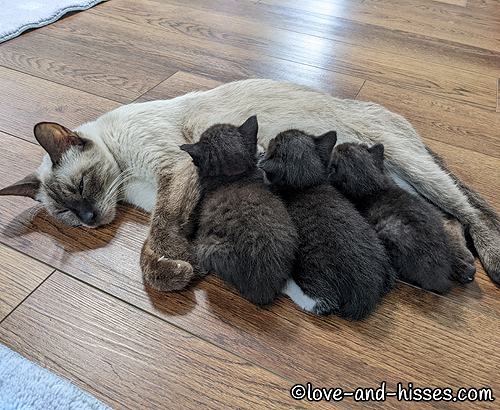 Good morning, from the milk bar. Left to right: Francesca, Saul and Mike. (Saul is currently the largest kitten – he and Nacho trade that title back and forth – and Mike is the smallest, of course.) 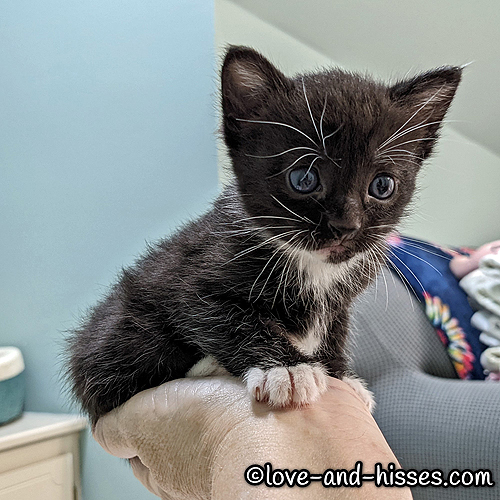 YouTube link
Francesca’s eating (kinda?) and Lalo’s lost. I don’t know that Francesca actually ate anything, but she was definitely interested in that plate of food. And bless Lalo’s heart, he might not be the brightest bulb. But that’s okay: not everyone can be a rocket scientist. 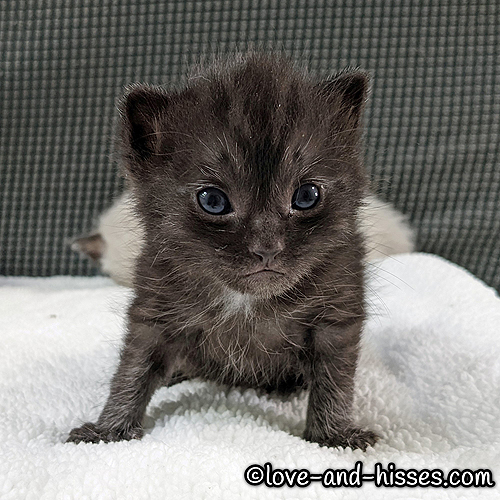 YouTube link
Gus (yellow collar), Nacho (black and white) and Mike (the little guy) have a tussle. As usual, the one who started the tussle is the one who’s on his back complaining that he’s being picked on. Ain’t it always the way? 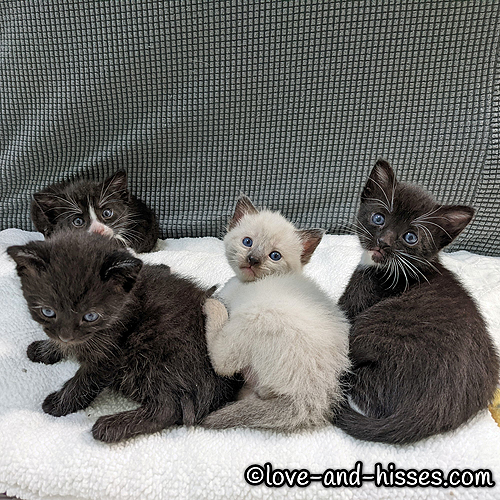 I appear to have interrupted a kitten meeting that I wasn’t invited to. (Back: Saul. Front, left to right: Francesca, Lalo and Nacho.) 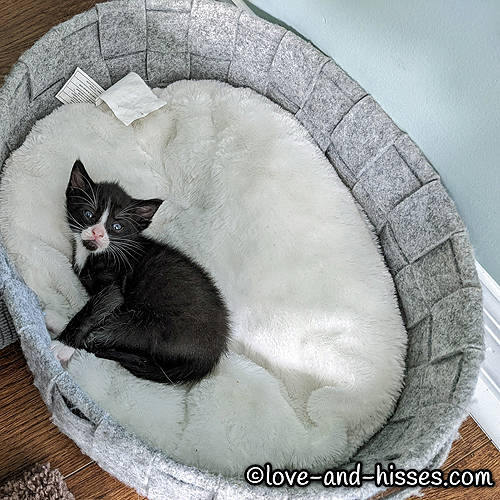 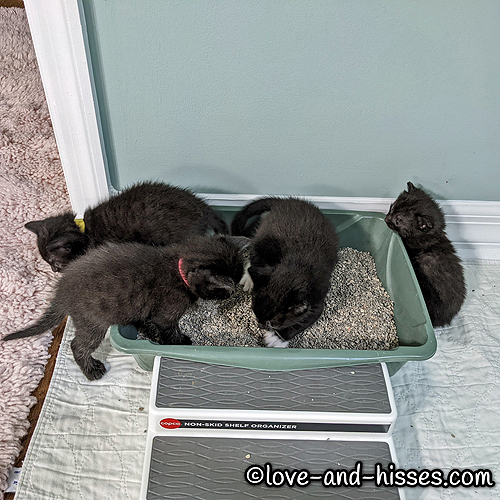 Obviously if there are 3 litter boxes, they’re all going to crowd into 1. No one pees alone in THIS house!

YouTube link
I have a lap full of kittens, and I highly recommend it. 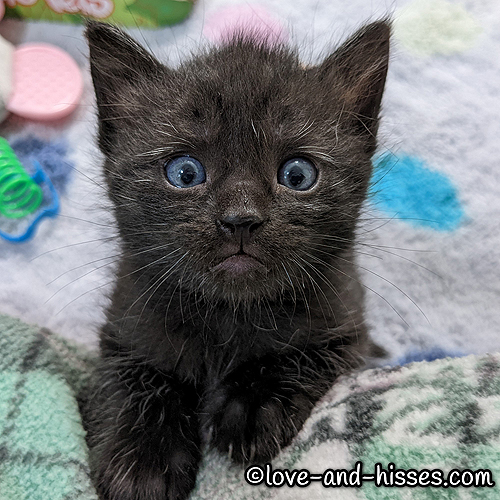 Francesca is simply amazed. (And amazing!)

YouTube link
Mike goes for a wander. I love his little waddle. That boy is just the CUTEST. 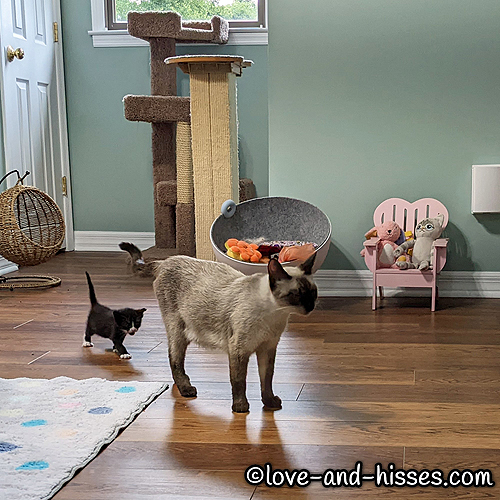 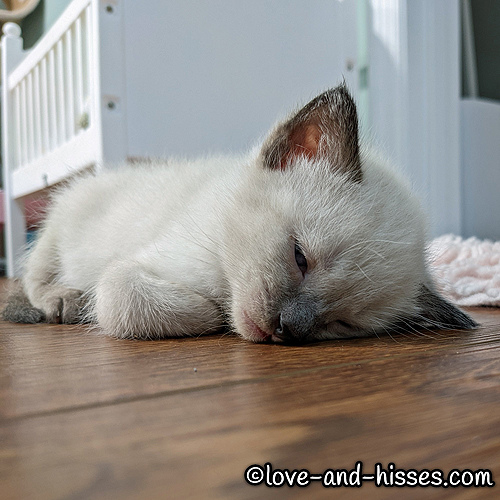 Good night innernets. (Lalo, sound asleep on the bare floor, because what fun would a comfy, soft bed be?) 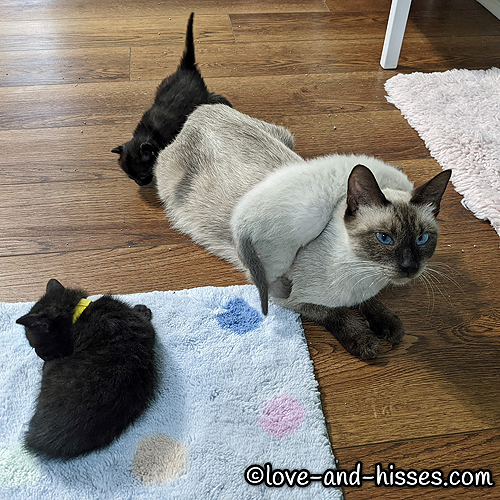 Mike and Lalo are sniffing around for the milk bar, and Kim is all “Nope. No milk bar here!” 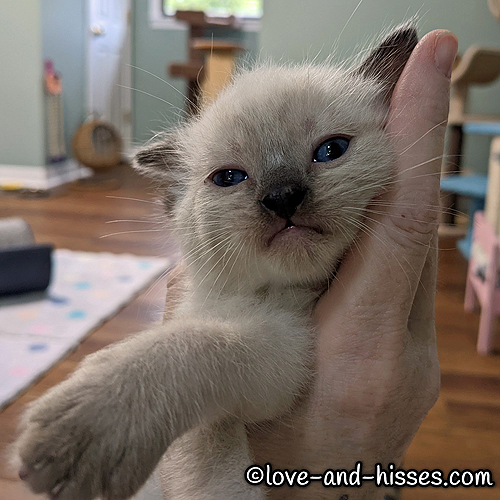 After I give Lalo 1 hundred million billion kisses, he gives me this look, and it always cracks me up.

YouTube link
Lalo, wandering around the room…and into the litter box! 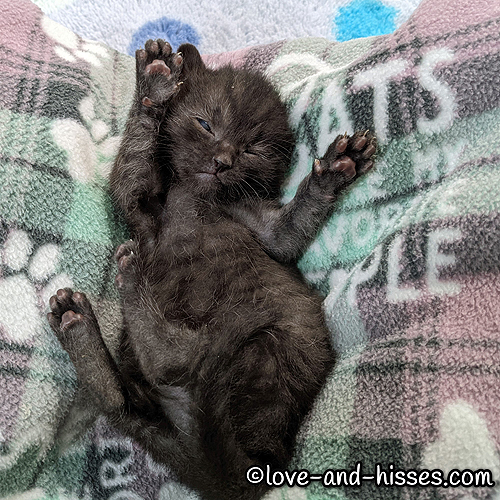 YouTube link
I’ve got a lap full of kittens… and Lalo’s in the litter box eating litter. As you do.⁠
⁠
Eating litter is normal for kittens at this age, which is why I use non-clumping litter until they’re older. I don’t think they actually ingest much litter (they usually chew on it while looking absolutely disgusted – and then they walk around spitting out pieces of litter, because of course.) 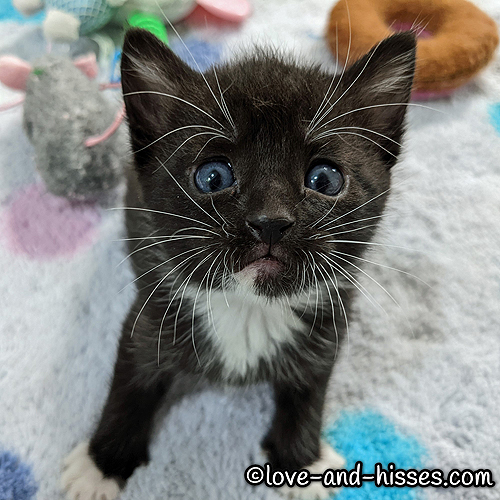 Nacho is utterly amazed by EVERYTHING. 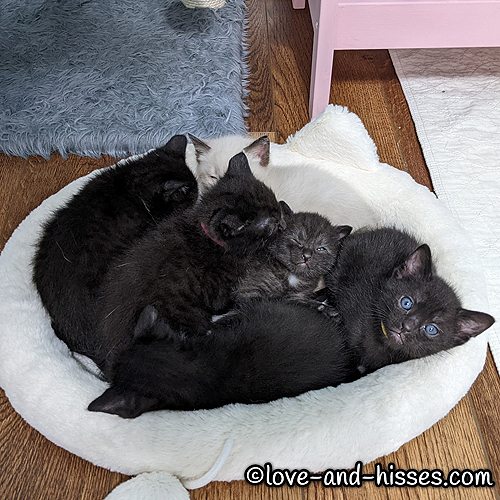