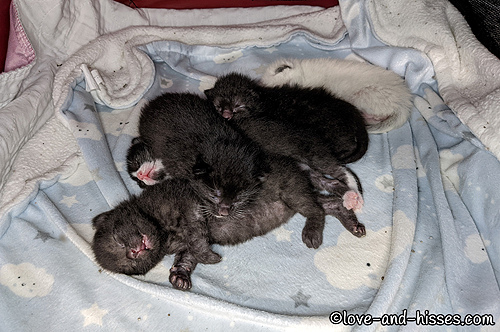 A pile o’ CUTE. That’s Francesca in the front, Saul right behind her, Nacho (Ignacio) flopped atop the both of them, then Gus (Gustavo) behind him, and Lalo at the back. 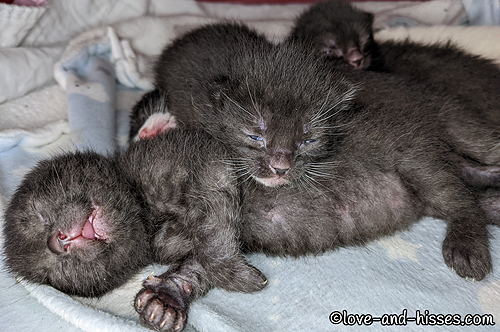 Francesca’s nursing in her sleep and Nacho is giving me the “Tell her to stop moving” look. 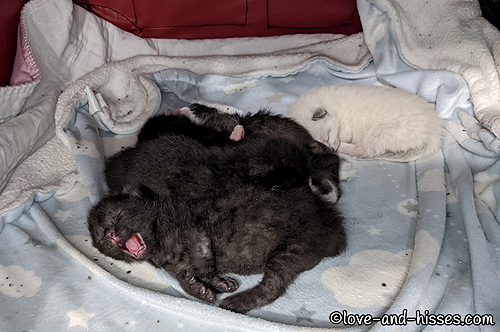 A yawn from Francesca. 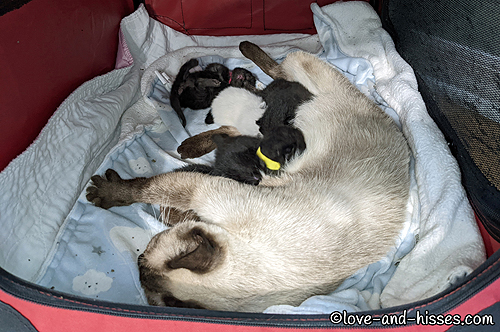 And along comes mama. You can see Francesca in the back (now wearing a pink collar), rolling around on her back. Gus – the other all-black kitten – is wearing a yellow collar.

I usually use dabs of nail polish to tell kittens apart when need be, but my nail polish is all dried-up, so collars it is. I PROMISE I WILL CHECK THE COLLARS EVERY TIME I GO INTO THE ROOM. 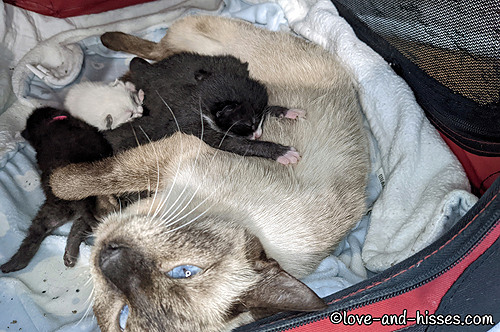 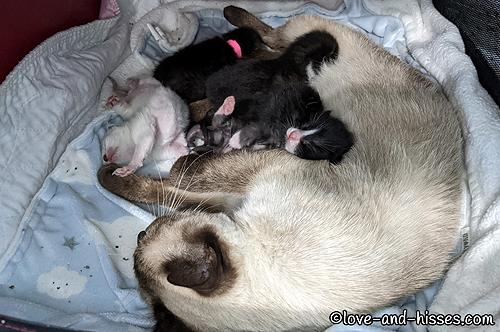 Saul in mama’s armpit, and Lalo over there rolling around. 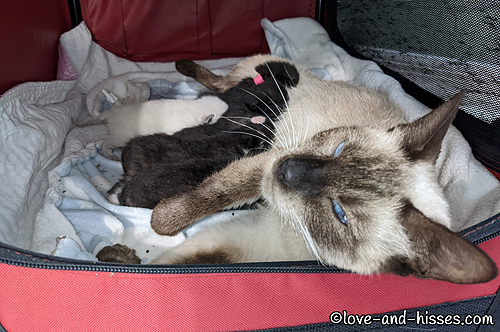 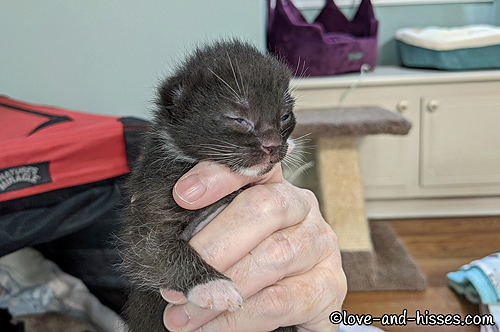 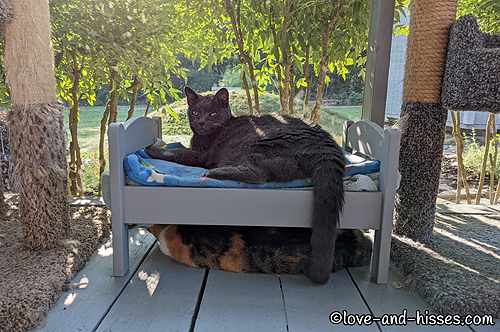 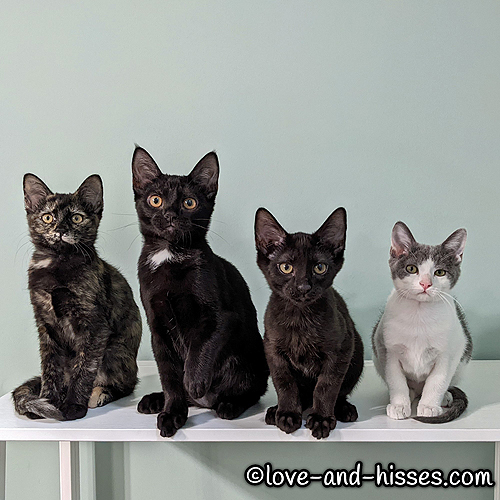 Update on Jenny, Lizzie, Roger and Brianna: They are still at Petsmart; the volunteers report that they are settling in well (and are much smaller than they look in pictures!) There is still an application on Roger.

YouTube link
Wiggly kittens… and Saul’s got a complaint. Maybe he’s making an early bid to be Da BAYbee? 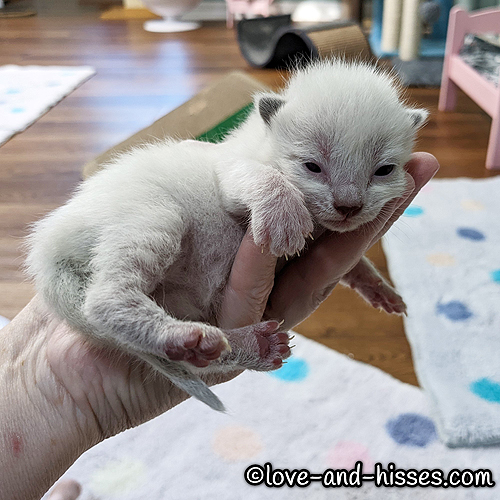 Lalo the little handful.⁠
⁠
(FYI, Lalo is a boy, and his name is pronounced “LAH-low.” I refer to him as a meezer because he is a siamese mix (strictly speaking, I guess all the kittens are since their mother Kim is a siamese mix, but “meezer” is as easy description of his coloring whereas the others are tuxies or all-black.)

YouTube link
2 1/2 minutes of nursing kittens (and Saul’s got a complaint again!) 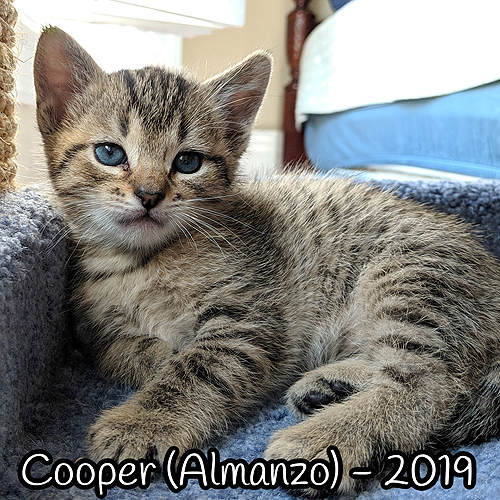 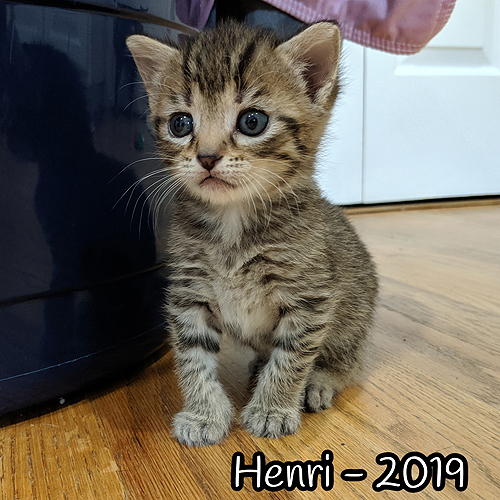 A few weeks ago, I had occasion to cat sit for a couple of former fosters. In early 2019, we had Charles and Caroline and their kittens. One of them, Almanzo, was adopted and renamed Cooper. Later that same year, we had Margeaux and Katriane and their kittens. One of Margeaux’s kittens, Henri, was adopted into the same wonderful home as Cooper (Almanzo). And this is (below) what they look like now!

They are not only a beautiful pair, they are SO sweet. They both met me at the door every time, and thoughtfully walked me through the house where the food was kept. They snoopervised my every move, and when I sat down they were both right there to be petted. SO sweet! (I wish the shot of Henri on his back by the front door had come out better, it was hilarious!)

They have a doggy brother, Alf, who was boarded while the family was gone. They also have a kitty sister Madison, who would let me see her, but informed me that she has enough friends, thank you. (I got a couple of pictures of her, but they didn’t really come out.) 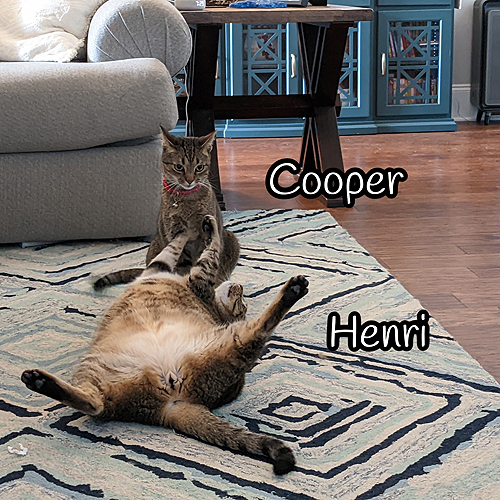 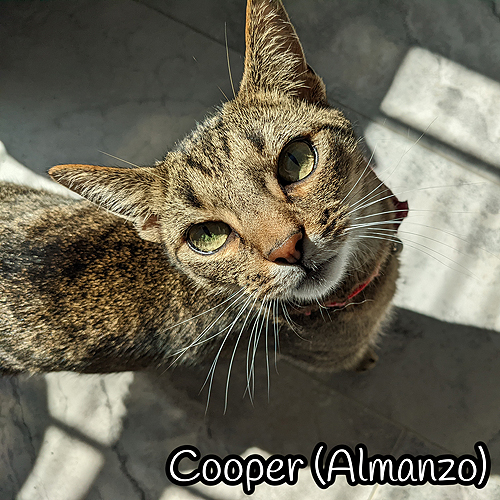 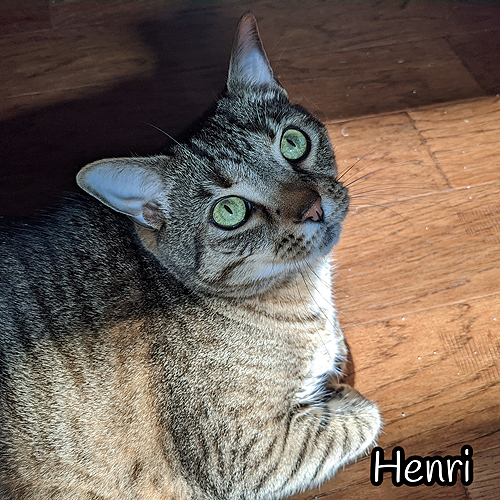 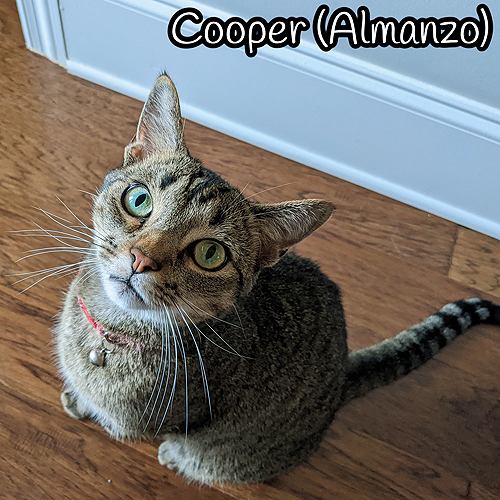 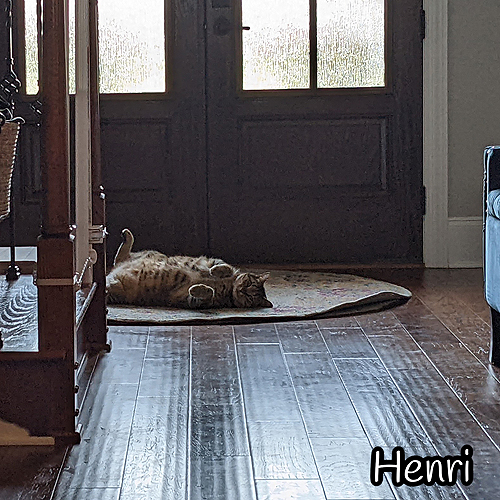 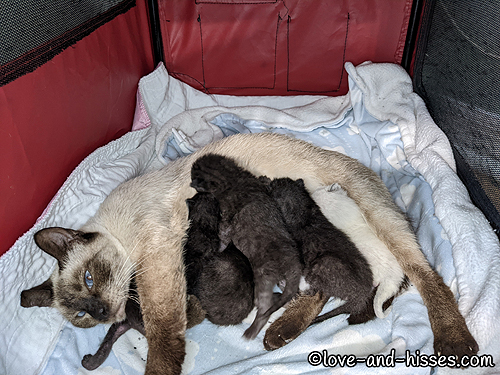