Your comment that Kim is 8 years old and reference to this being her last litter got me thinking, and so I offer this alternative scenario for your consideration (very condensed here): Kim was raised in an ultra conservative home where she wasn’t allowed toys or to be on the furniture. She wasn’t spayed because that was deemed an unnecessary expenses since she was never allowed outside. One day there was a guest in the home and Kim overheard a conversation about a place called “Crooked Acres”, where pregnant and momma cats were treated like the queens they were. Apparently that specific place no longer existed, but the humans that had lived there still did the same thing in a different location. Well – this sounded much better than her current life! Knowing that she was no longer a young cat, the next time she found herself going into heat, she put her plan into action. Her humans were used to her being a very well behaved cat, so she was able to take advantage and race outside when they weren’t paying close attention. She knew she couldn’t be choosy about the father, so she wasn’t. And after all, what’s wrong with being a cougar anyway? Once nicely with kittens, she used her winning looks and personality to get some humans to take care of her. And after she gave birth, she heard that she’d be going to Robyn, that very same human who used to live at Crooked Acres. Success!! Kim snuggled with her kittens knowing that all of them would now be coddled and cuddled and played with until their forever people took them to homes filled with playmates, cat toys, cushions, treats and lots of love. The End.

Oh, I much prefer this version!!

Were Mike’s family found and taken in?

They are out among about 200 bales of hay at the moment (there is a mother present, but she’s totally feral.) They do intend to trap them all!

I’d love to know what Fred is calling the kittens, especially since there are a few that look alike. I saw something on the internet about funny names that kids give things that are actually very accurate (like calling an aquarium a “fish zoo”) and I immediately thought of Fred and his kitten names lol!

I wish I had names to report, but Fred hasn’t so much as glanced at the kittens. He finds them incredibly boring at this age – it isn’t until they’re about 2 1/2 – 3 months old that he becomes interested in them (he always complains that they leave “Just when they were getting interesting!”) I’ll report any nicknames when they occur in a few months. 🙂 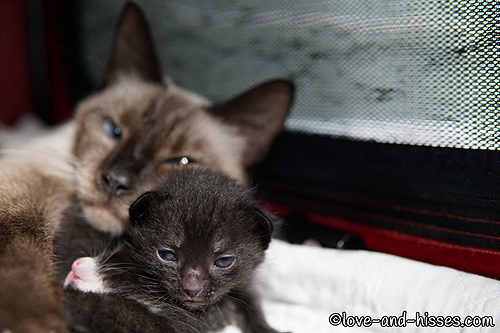 Mama keeps an eye on Mike (and me.) 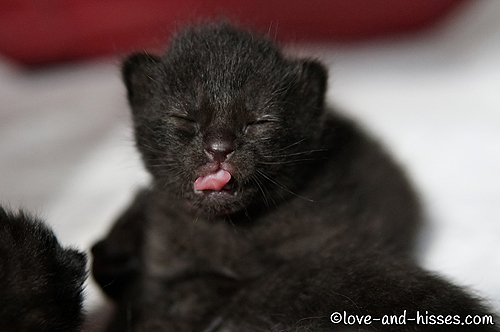 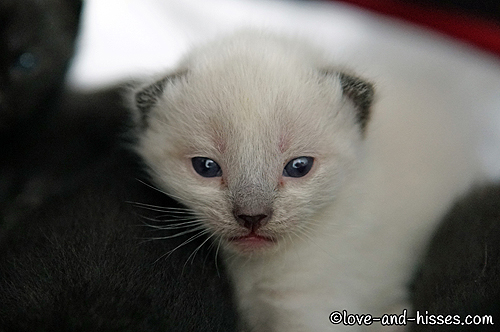 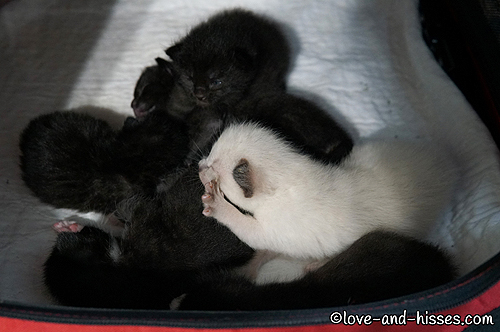 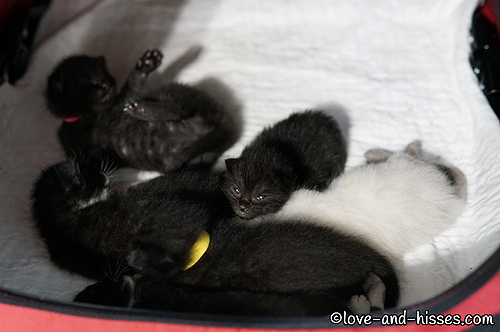 A pile o’ kittens with Mike right there in the middle. 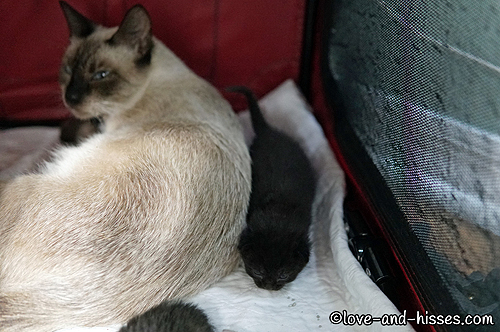 Francesca goes for a wander. 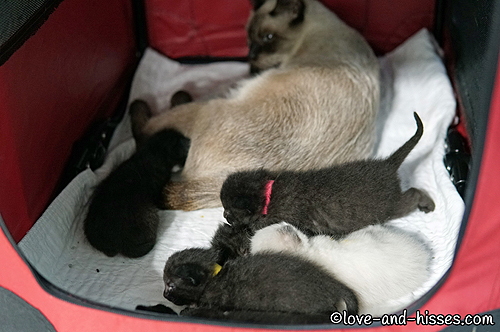 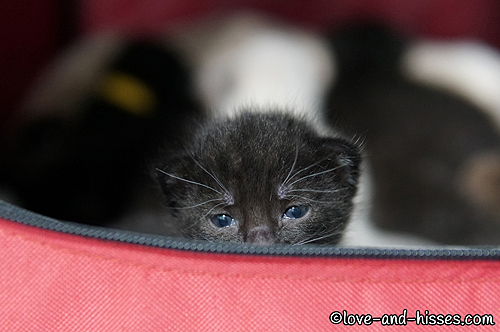 Gus takes a look at the world beyond the crate. 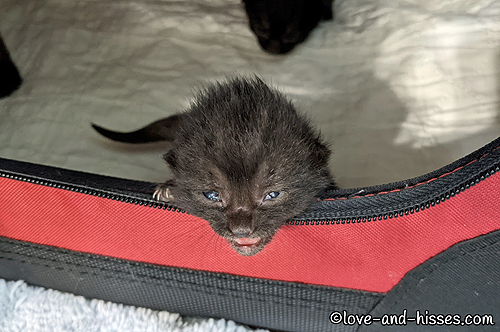 Mike takes a moment to yell at me (actually, I think he was yelling for Kim.) 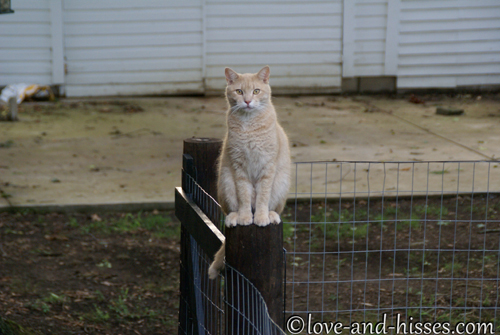 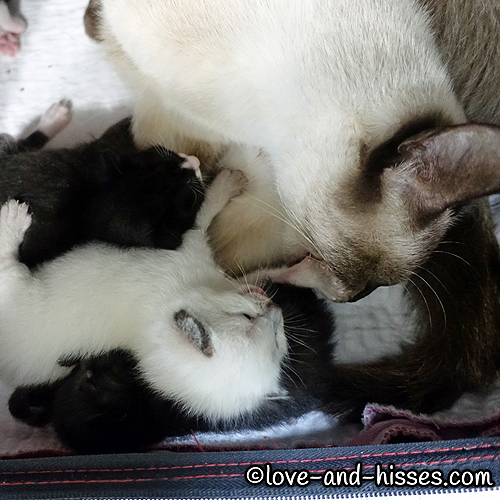 Kim was washing Lalo, and he put his little paw on her mouth and told her to stop. “I’m clean enough, Mama!” 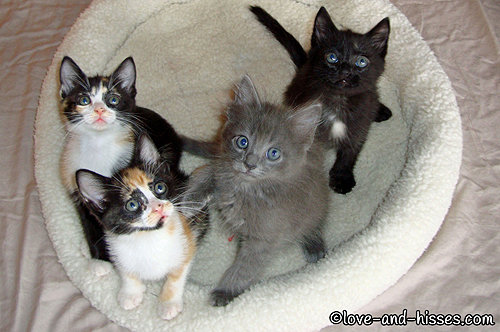 Throw Back Thursday: Back in 2009 (!) we had these four kittens, known collectively as The Wonkas – that’s Violet Beauregard (upper left), Veruca Salt, floofy gray Augustus Gloop (Gus) and Mike Teevee. So as Chanter pointed out (and I had not noticed!) this is the second time I’ve had two fosters that I call Gus and Mike!⁠
⁠
All 4 kittens were found under a bush near where Fred worked (back before he started working from home). We fostered them through Challenger’s House (who I was fostering for at the time), and all were adopted out. Gus and Mike were adopted together, and went to live in Oregon! They were an awesome bunch.

YouTube link
Saul just loooves to roll around on his back and kick his feet in the air. He is one chill dude! 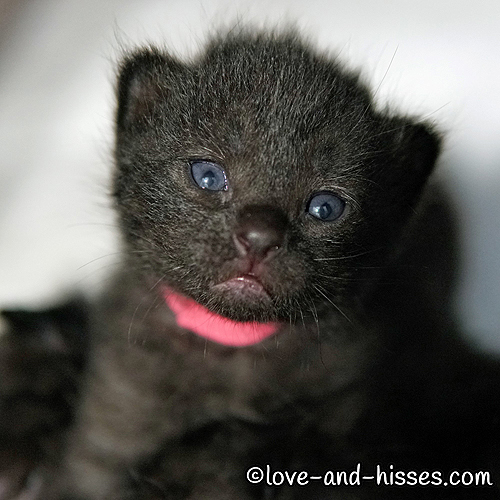 YouTube link
The kittens wander around the crate waiting for the milk bar to return… and then it does, but sometimes we get a little confused and lost. The crate can be big sometimes! 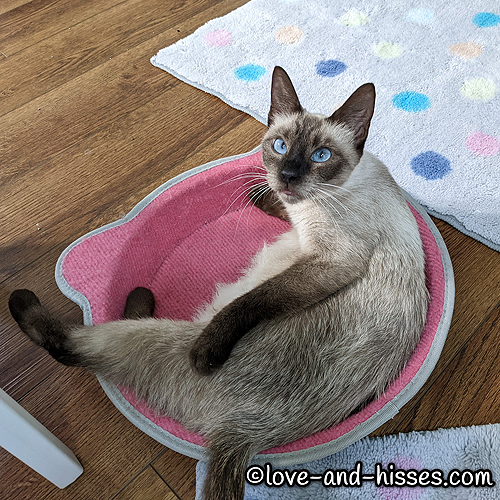 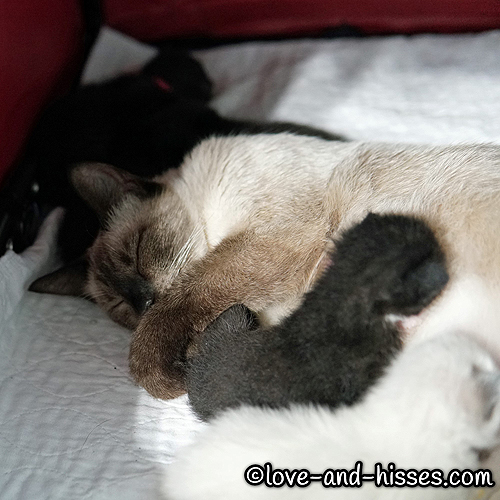