Funny, I was just wondering if y’all had put in a Newt post in the new backyard since he loves them so much. Come to think of it, the magnificent Khal on a post (of sorts) is also one of your finest photos. 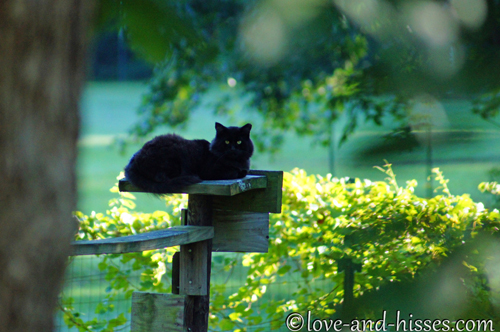 Oh, I had forgotten that picture of Khal. That was in the old days when he wanted nothing to do with me – I had to take that picture through the window, and when I stepped outside to see if I could get a better shot, he was OUTTA there.

On our lengthy list of things to do eventually is to put a post in the back yard. I don’t know if Newt will climb it, but I have a strong feeling that Charlie would LOVE to sit atop a post and watch the goings-on!

Robyn, do you still have to supplement Mike?

I had stopped for a few days because he was refusing the bottle, but he really wasn’t gaining as much as he should have been, so I switched to a different formula and after a day or so of sticking the bottle in his mouth every few hours, he decided it wasn’t so bad. Sometimes he latches right on to the bottle and drinks a bunch, and sometimes he chews on the nipple a bit and then refuses it. But he’s gaining well now, so he’ll be getting the bottle (or at least I’ll offer it to him) until he’s eating solid food on his own.

Just checked youtube on that Alice Mo song – discovered the ear worm has been stuck in my head for a decade. Congratulations and happy birthday on an internationally decade lasting song – joining illuminati such as “Call me Maybe” and “gangnam style.”

Your lovely backyard picture of Khal made me wonder, did Fred get his peach trees? Do you have a veg garden, or a tomato patch? (Your potted flowers are beautiful, btw!)

I need to get out there and take some pictures – but yes, we have a vegetable garden (though it’s mostly done and over now), which included squash, tomatoes and peppers. We learned that the corner of the back yard wasn’t the best location for a vegetable garden (it doesn’t get enough sun), so we’ll be planting in a different location next year. We didn’t get peach trees – Fred decided they were too much of a pain – but have a couple of pear trees, apple trees, muscadines (grapes) and several fig bushes. Oh, and a couple of blueberry bushes. (None of the fruit trees/bushes bore fruit this year, except for a couple of apples which aren’t ripe yet.) 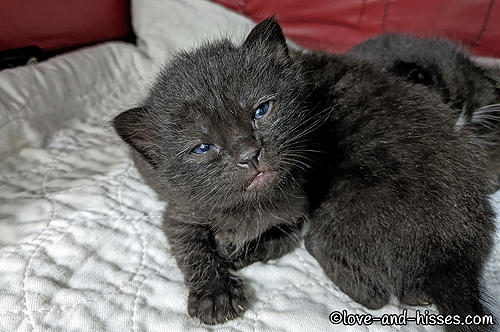 Francesca’s got a sleepy (and an attitude.) 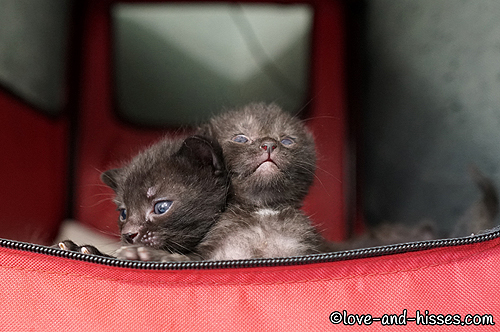 Mike’s expression as he gazes out at the big wide world is KILLING me. And Gus is all “No! Don’t go out there! It’s not safe!” 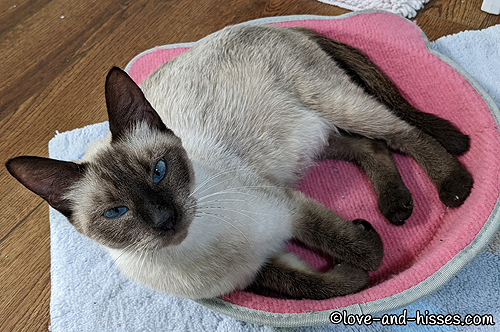 She just LOVES that pie plate. And Kim pie is my favorite! 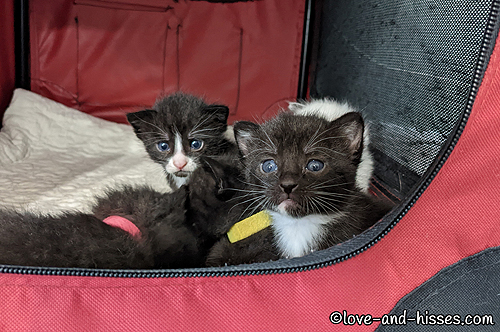 Another look, and Nacho is all “Nope. Just not ready yet.” 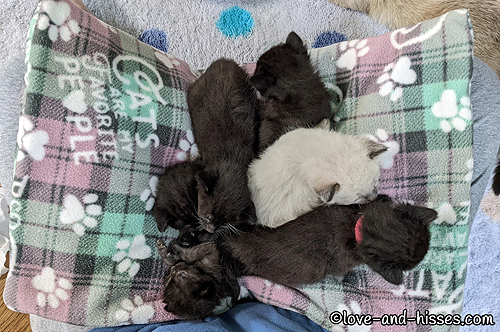 That is one full lap of kittens. 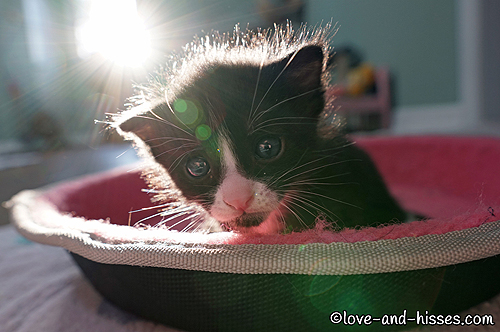 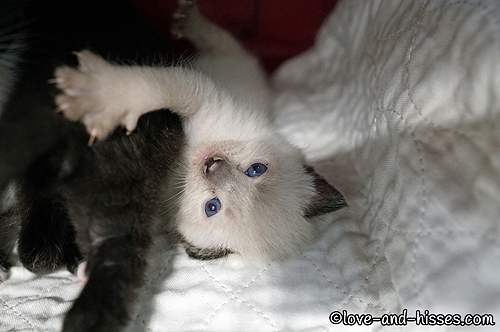 Lalo loves to roll around on his back. 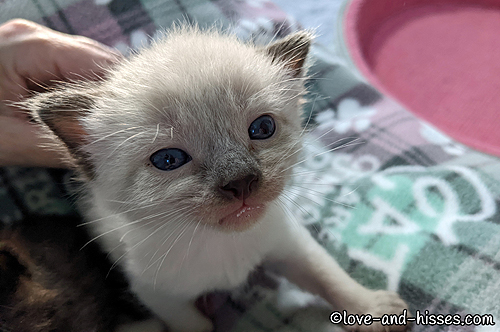 Once Mike is done with his bottle, I always offer it to the others. Usually they’ll lick at the nipple and swallow the formula that gets in their mouth, but they haven’t been very interested. Then ALL OF A SUDDEN, Lalo was like “THIS IS FABULOUS!” and latched on and slurped down a decent amount. I’ll be interested to see if the other kittens follow suit. 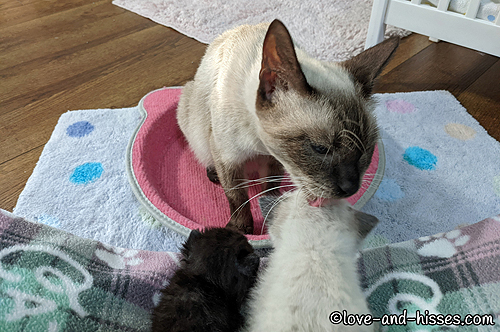 Mike and Lalo in my lap, getting a bath from Mama. 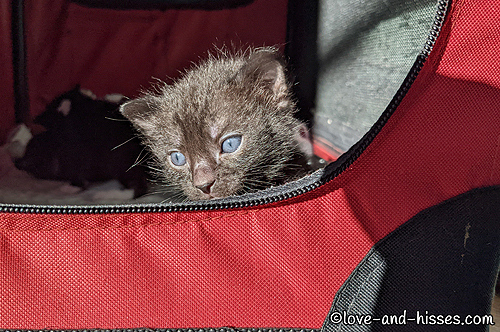 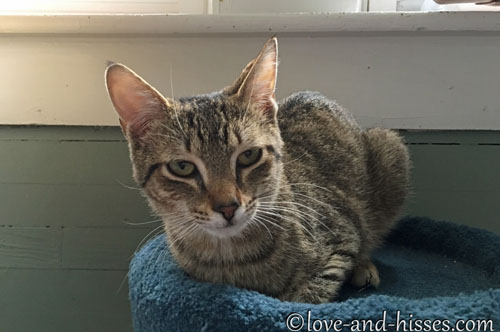 An old shot of Dewey so that y’all don’t forget what a pretty boy he is! 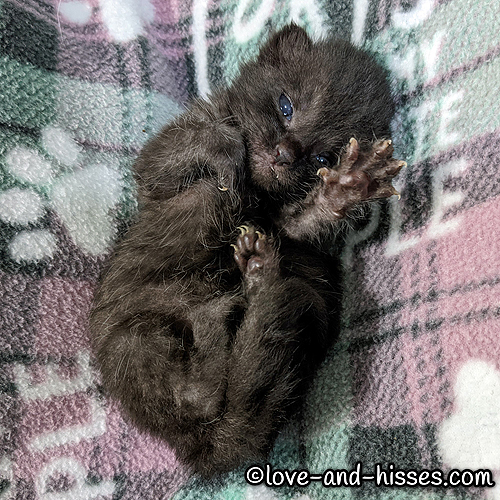 “Hiiiiii innernets!” I am pleased to report that Mike has now more than doubled his weight! He was 4.2 ounces (119 g) when I got him two weeks ago, and he now weighs a solid 9 ounces (255 g.) Of course he’s still just a little guy compared to the current heaviest member of the litter, Saul, who weighs 15.7 ounces (445 g) but I suspect that in the weeks to come he’ll catch up. 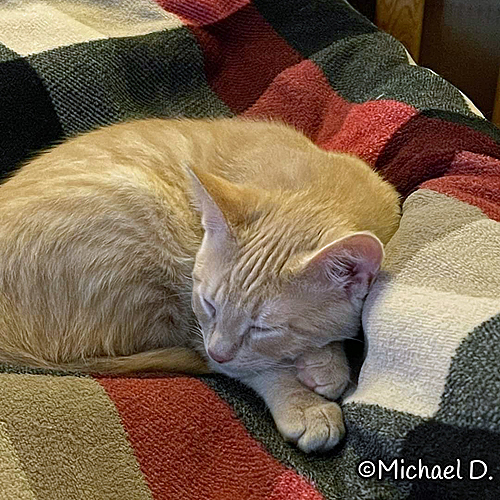 YouTube link
I cranked up the sound on this a bit. Listen to that little purr! Nothing makes that boy happier than a full belly and a belly rub. 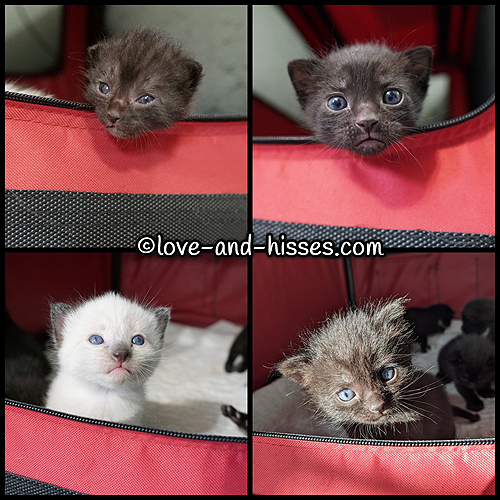 I’ve noticed a few comments asking when I’m going to let the kittens leave the crate. They can leave whenever they’d like – I’m not detaining them. They’re not under arrest. They know their rights. They’re free to vamoose the crate any time. I suspect it’ll happen in the next day or so! Clockwise from top left: Mike, Gus, Francesca, Lalo.

YouTube link
For Throw Back Thursday: a compilation of (some of) our bottle babies through the years. (We had more bottle babies than this, but I don’t think I made videos of all the bottle babies in action.) – The Starks (2013), the Squash Bugs (2015), the Half Pints (2019 – they were being supplemented because their mother was so small), and Clyde and Cutey Bunny (2020). 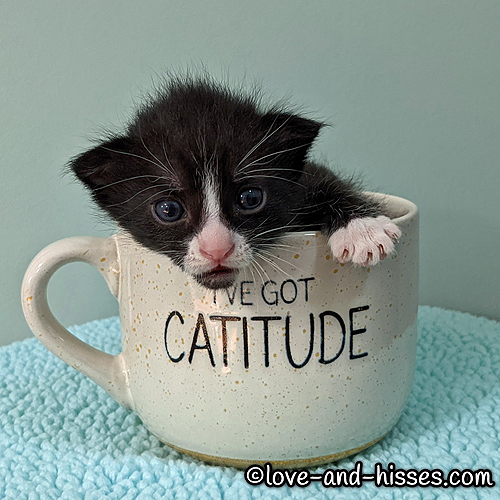 Just a little bit of Catitude* from Saul.

*I would have spelled it “Cattitude,” personally. 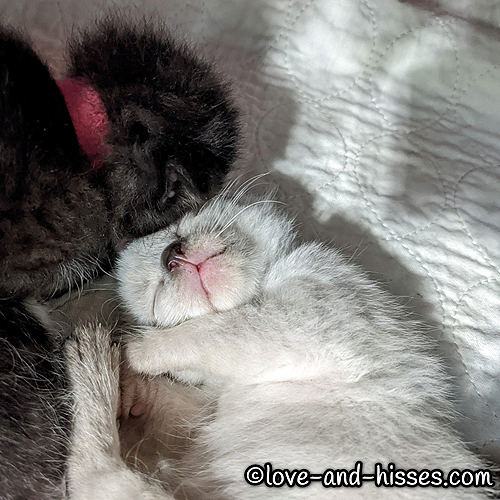