Great to see your little ones getting adopted. Seeing how much you bond with them, how do you cope with the pain of separation? Just thinking about it, at times, can make me teary eyed. I guess you can tell I haven’t been doing it for long, hey? This is a job you do strictly for the love and joy you share.

Basically, I just kind of muscle through it. It’s never easy – never has been – but it gets easier after the first day or so (and I find that getting another litter into the foster room to distract me helps the most.)

It’s much easier to say goodbye when they get to go straight from here to their new homes. When they have to go to Petsmart, it just sucks. I have to stay away from Petsmart when I have fosters there, otherwise I am EXTREMELY tempted to go get them and bring them back home.

Wow! I don’t even remember the last time you had to take kitties to Petsmart. I trust they will find their humans there soon.

It was actually less than a year ago – Molly Marinara, Franco Fondue, Alfie Alfredo and Christopher Chutney had to go to Petsmart in October. Molly and Franco were adopted (separately) at Petsmart, but Alfie and Christopher came back here for a break in… November, I think? Yeah, it was November, because I went and brought them home a day or two before Thanksgiving. Then they were adopted from here (together) and went to live in Mobile. Franco was returned in February (he was too rambunctious for the other kitten in the house; she spent all her time hiding from him), and he went to join Alfie and Christopher. (I can’t believe I was able to remember all those details. What’d I have for lunch yesterday? I dunno!)

Mama’s gorgeous! How old do you think she is?

So am I misremembering or is this your first Meezer Mama?

This is my very first Meezer Mama! (We thought Wisteria, back in January, was going to be our first, but she turned out to be a faker.) 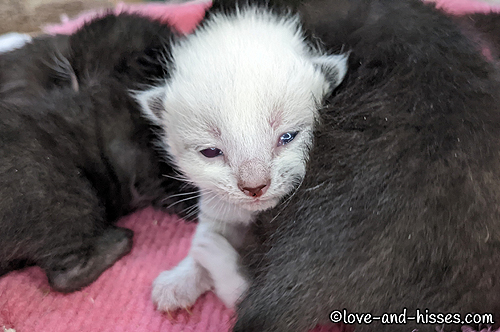 Lalo’s working on his focusing skills. 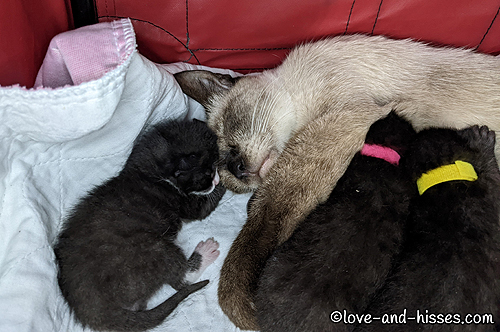 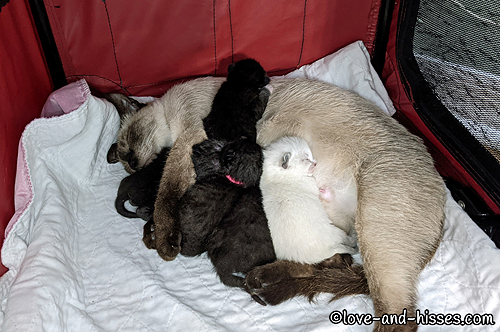 And makes himself at home. 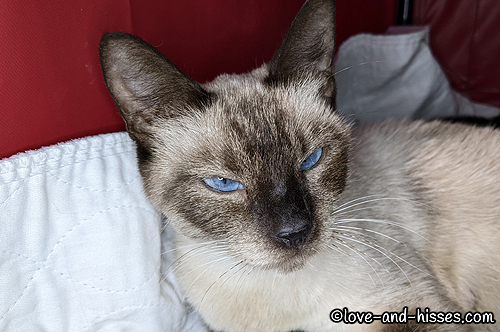 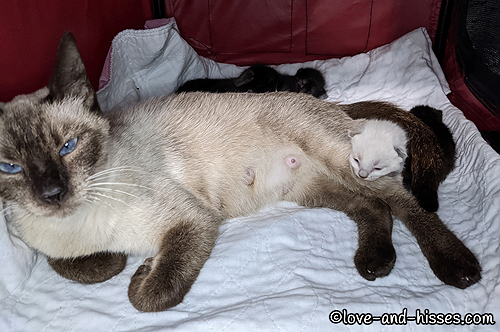 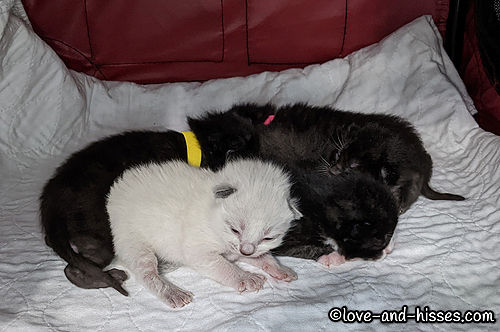 Lalo is all “Wait a minute. What is THAT?” 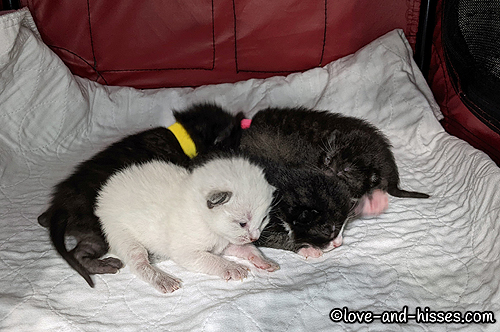 “Whoa. There are TWO of them?!” Wait ’til he discovers his back paws… and his TAIL. 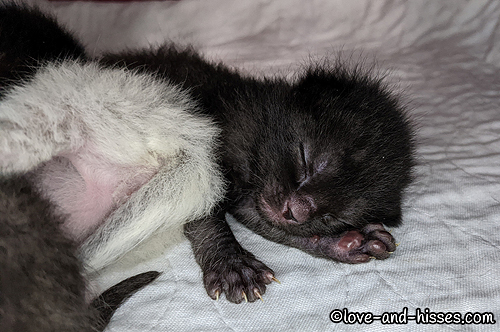 Gus is out cold. 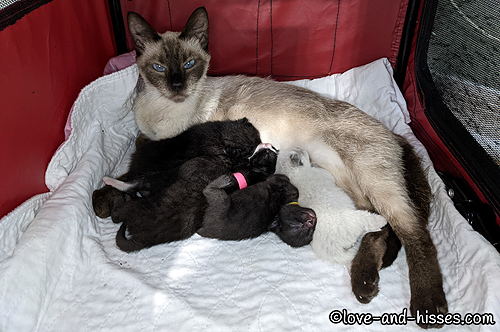 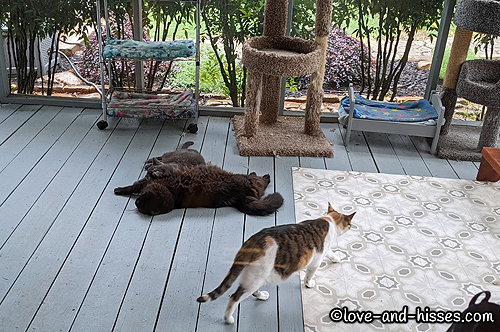 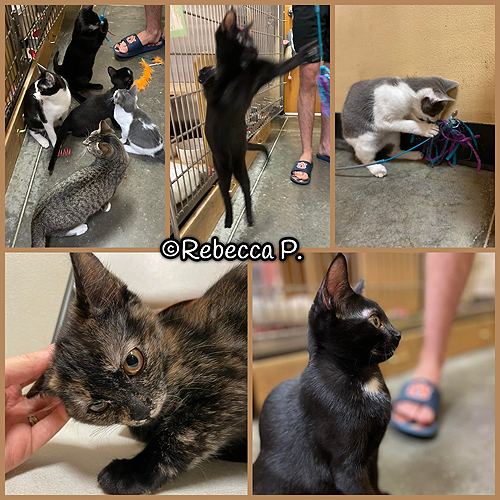 Thanks to Forgotten Felines of Huntsville volunteer Rebecca, here are some shots of Roger, Brianna, Jenny and Lizzie at Petsmart. That middle top picture is Roger, mid-leap. As mentioned yesterday, they are settling in and playing well with the others. 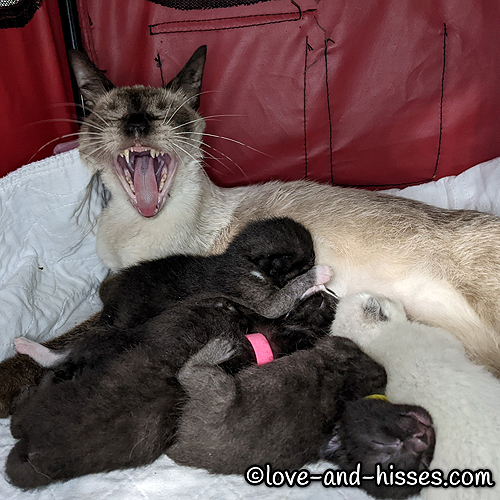 About Kim Wexler: judging by her teeth, we believe she is at least 8 years old. I don’t know how she ended up at animal control (either an owner turn-in or found stray), but I can only imagine how many kittens she’s had in her life. (Good news: this is her LAST litter. She’ll be spayed in another month or two, once her kittens are eating well on their own.)⁠ 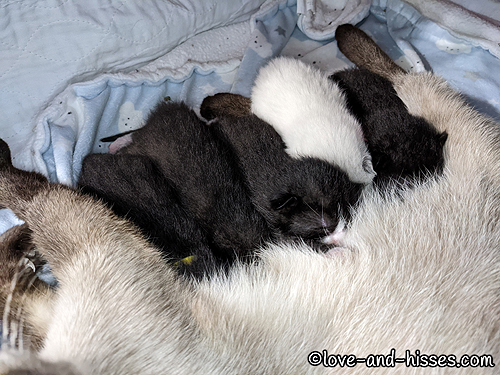 From left: Gus (Gustavo), Nacho (Ignacio), Saul, Lalo and Francesca. Gus and Francesca are wearing collars now (she’s pink, he’s yellow) so I can tell them apart without needing to check their back ends. 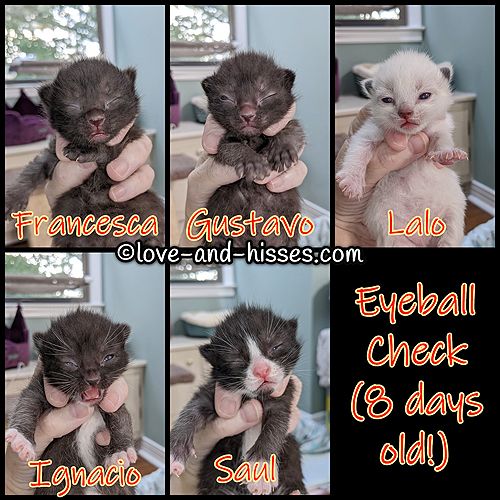 Eyeball check! At this point, Francesca is in no hurry to see anything out here, but everyone has at least some eyeballs showing. I like Gustavo’s skeptical one-eyed peek. Kittens generally open their eyes around 7 – 10 days, but it can happen a few days earlier (Lalo’s eyes were open at 5 days) or later, so everyone’s right on schedule at this point (assuming that Francesca decides to get with the program.) 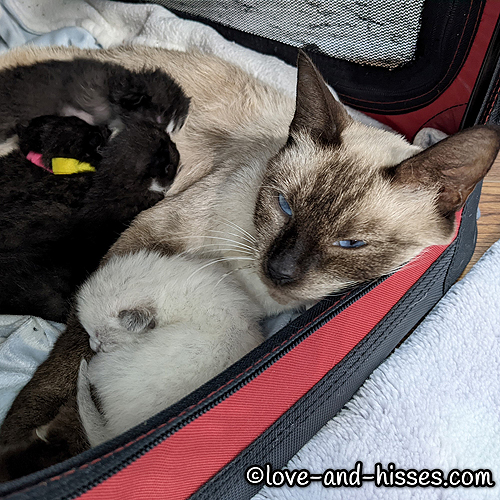