So who did you guess was going home on Saturday? Did you guess Jon Snow, because there were so many pictures of him? Well, it wasn’t Jon Snow. In fact, it wasn’t any of the Starks – they haven’t been spayed and neutered, and they won’t be done with their vaccinations ’til the beginning of September.

This cat got a lot of interest since the day he (yes, HE) was born, and in fact I got (I think) emails from four different people who were interested in him. Someone even came to the house to meet him, and I thought they were going to adopt him, but I guess they decided not to, since I didn’t hear anything else from them, and they didn’t go by Petsmart to fill out the application.

Then last week I got an email from Selena, who adopted the beautiful boy who’s now known as Flynn (he was Kohle when he was with us). She was curious to know if any of the Dragons had been spoken for… and after a few emails back and forth, we made plans to meet at Petsmart on Saturday so she could officially adopt him and take him home.

Who went home? Have you already guessed? The cat who went home on Saturday is…. 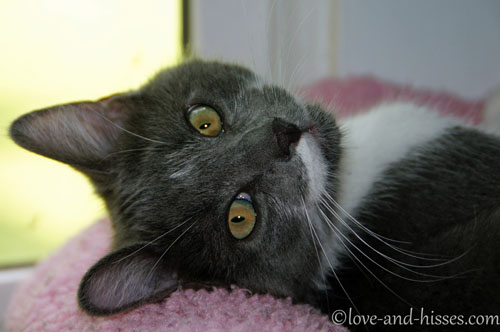 Selena reported that things are going well – Flynn is curious, but hissy (which sounds about right at this stage of the game!) and Puff is a happy boy.

Luckily, I got some great last pictures of Puff with his brothers and sisters. 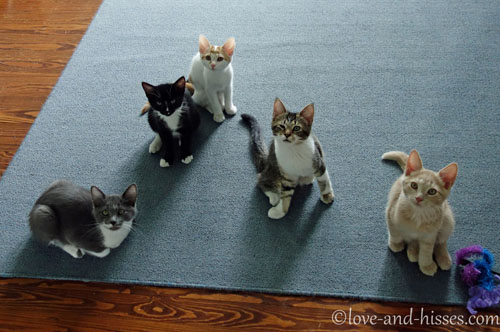 Awww, a last shot of all five of those sweet Dragons. (Ruth is cracking me up, with the one squinted eye and the “Whatchoo talkin’ ’bout, Willis?” look on her face.) 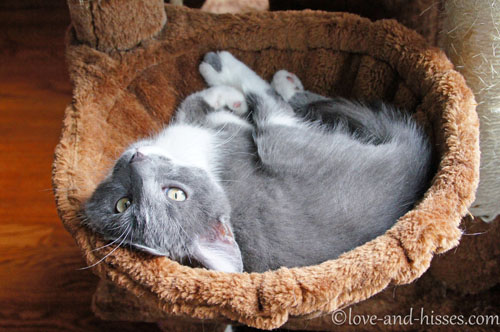 Hangin’ in the hammock. 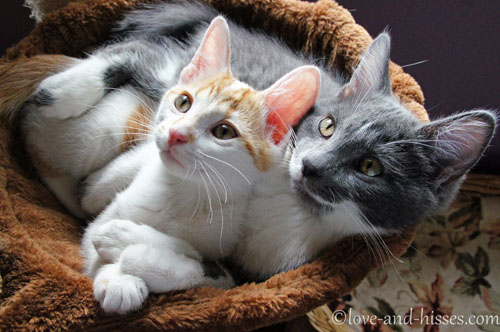 A snuggle with Ember (this looks very Glamour Shots, doesn’t it?) 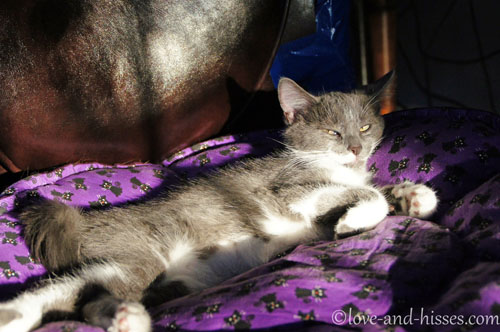 A snooze in Fred’s chair. 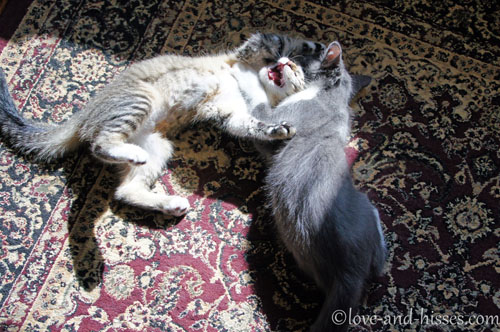 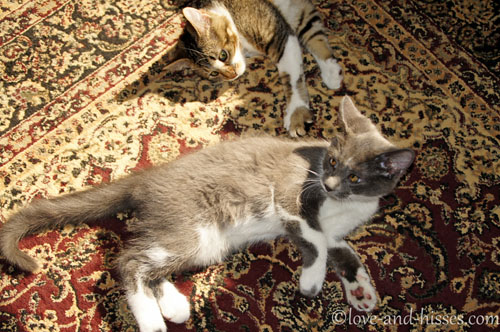 A little of the Ears of Annoyance at Ruth. 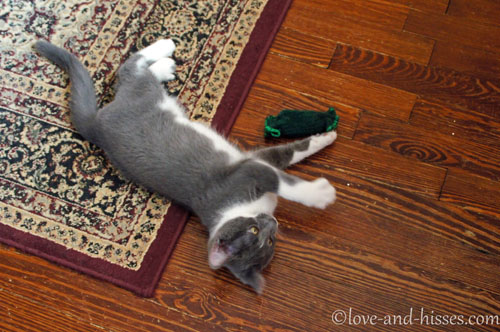 Some cavorting with the Tickle Pickle. 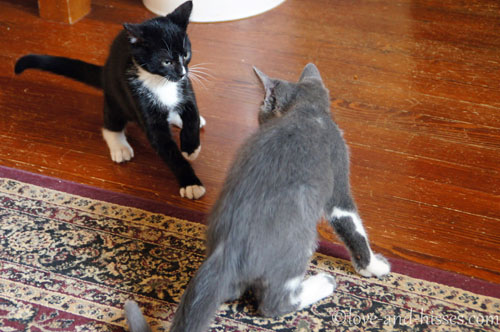 A bit of “I’ma kick your BUTT!” with Norbert. 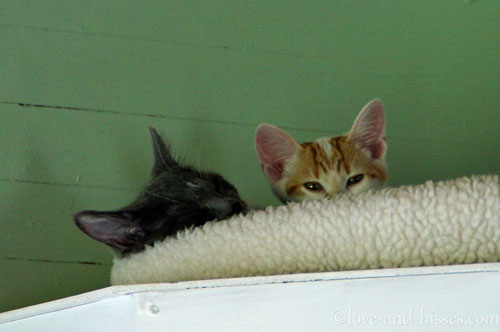 And then a nap with Ember. This is literally the last picture I took of him before we went to Petsmart – in fact, Fred had to get out Da Bird to lure him down so I could put him in the carrier!

The rest of the Dragons seem to know that something’s different, but they aren’t quite sure what it is. I’m sure that on some level they miss him, but kittens adapt pretty quickly to changes like that, so don’t be sad. Be happy that Puff has his forever home and that it’s a great one – and that he’s got a big brother who will succumb sooner or later, whether he wants to or not. How could he possibly resist that silly boy?

Most of all, be grateful that Selena has promised us updates! 🙂

Hey, speaking of the Dragons – do you remember this girl? Though maybe you remember her looking more like this…. Well, in a surprising turn of events, on the very same day that her sweet boy Puff was adopted, Khaleesi was also adopted! She went home with a man whose parents actually adopted from Challenger’s House several years ago (Perry & Paloma – not my fosters (they were from before we started fostering), but other Challenger’s House volunteers might remember the names!) She apparently liked him a LOT, and it sounds like true L-U-R-V-E.

It was a good weekend for the Dragons. Now, if those last two Royals (Leia and Buttercup) would just turn on the charm and snag themselves a home, then that would be great! Oh noooooo… yet another sad case of Melting Kitten Disease. When will we stop this insidious and entirely made up disease that takes down millions of kittens every year? WHEN?! Arya works on her Ears of Annoyance. After recovering from his bout of melting, Brandon decides that I make a pretty comfy bed. Okay, LOOK, Arya. You can sit there and look annoyed by the fact that I cannot stop kissing you, but the fact that you purr up a storm every time I even look your way kind of negates the annoyed look. “I suppose the kissing isn’t the WORST thing ever. I GUESS.” Jon Snow’s pretty sure I need a pedicure. And he’s going to take care of that for me. With his CLAWS. (I don’t think you know how pedicures work, JS.) Truly, I just cannot stand how beautiful that boy is. “Turn off the LIGHT, I’m trying to SLEEP, JEEZ.”