The ‘Maters profiles are on hold ’til tomorrow (I’ll do Sungold and Wellington tomorrow and finish up with mouthy little Caspian on Friday), so you can meet (drumroll, please!)…. 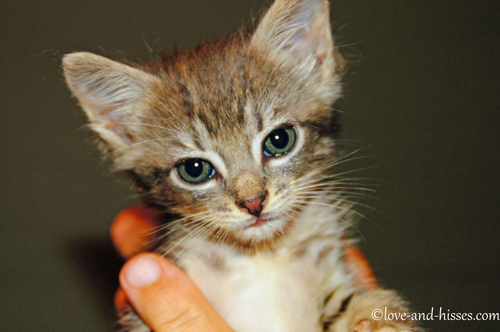 Polly Pickle is a girl. She’s a silver tabby. (I only got one picture of her face before she demanded to be unhanded.) 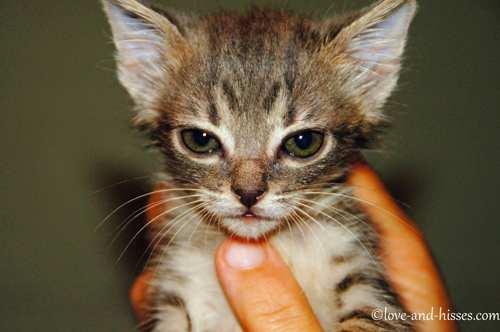 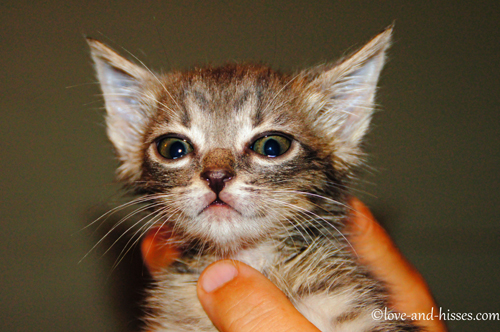 Petey Pickle is a boy, and also a silver tabby. You can’t really tell from these pictures, but he bears a striking resemblance to a Gremlin (which makes him even more adorable.) 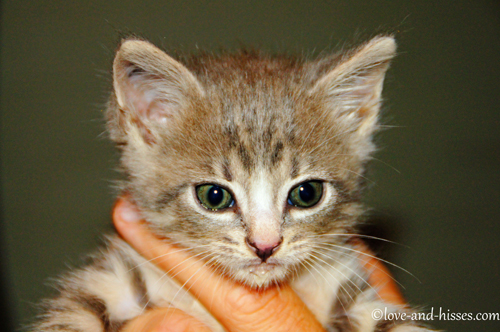 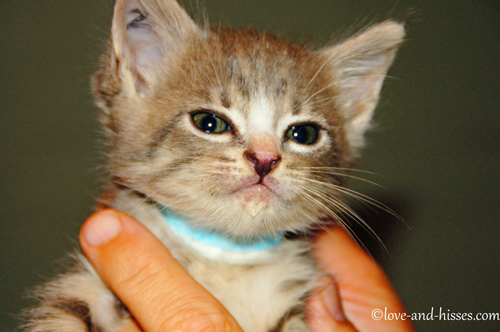 Percy Pickle is also a boy, and also a silver tabby. 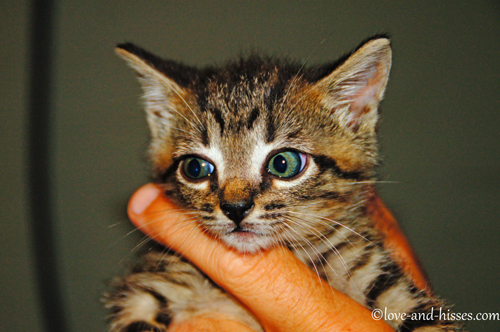 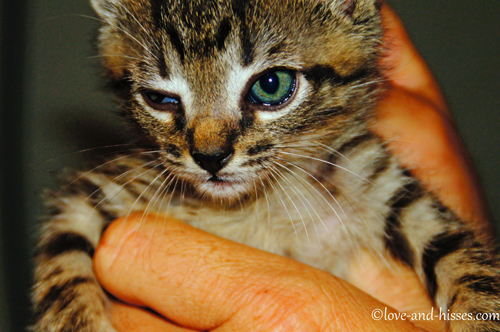 Joe Pickle is a brown tabby, a boy, and clearly the evil mastermind of the litter.

These guys are such sweet, friendly little things. They’re estimated to be about 5 weeks old (date of birth July 2nd). They’re eating well, they’re using the litter boxes just fine, and they have totally made themselves at home (I got them Monday morning). They run over to me and climb in my lap as soon as I sit down in their room, are petted and kissed and hugged, and then run off to play and eat before circling back around for more love.

The story is that they were found as strays.  They seem to have been well cared for, and have definitely been around people. I have no idea where their mama is.

Not surprised that I have another litter already, are you? I did go the ENTIRE weekend with just the ‘Maters, after all! We moved the ‘Maters down to the guest bedroom (they now have the run of the house during the day) and the Pickles are in the foster bedroom upstairs. 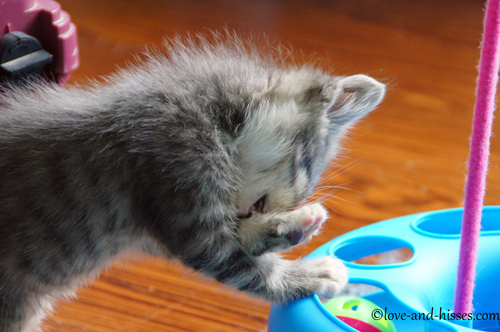 Polly (I think) pauses mid-play to clean her paw. 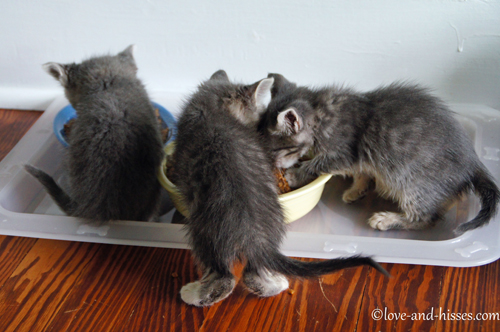 The three silver tabbies at the food bowls. 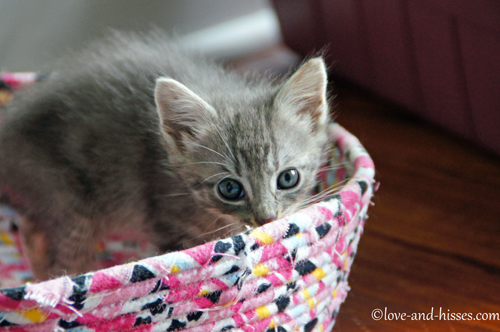 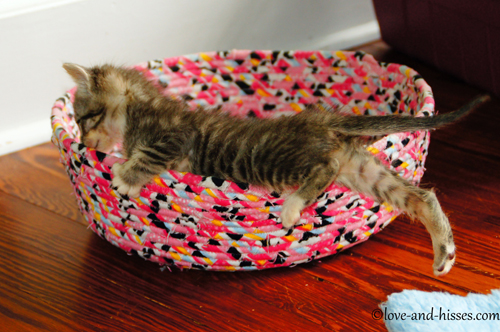 That basket’s already become their favorite place to sleep. 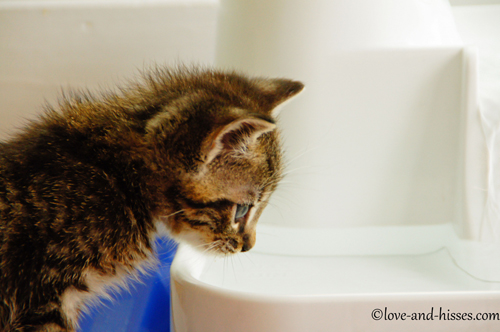 Joe at the water fountain. 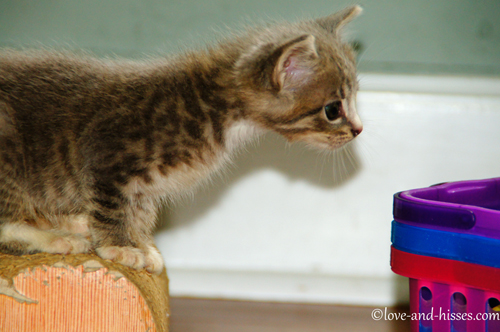 Percy (I think), checking out the plastic baskets. 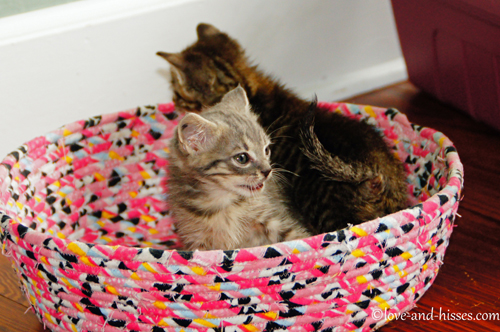 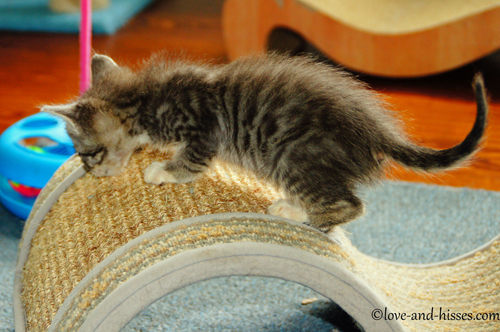 They have such pretty stripes. 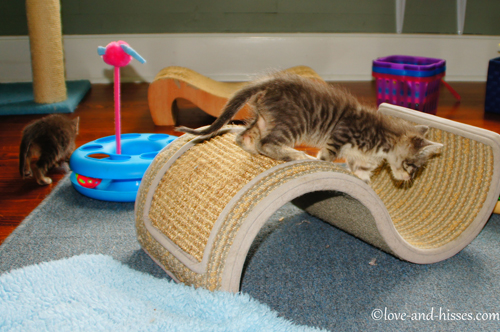 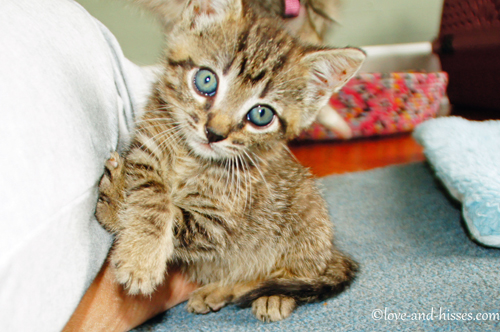 Joe, with his claw caught. 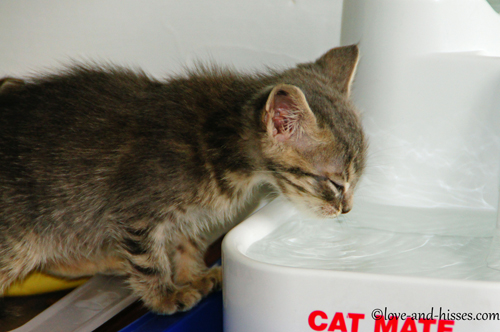 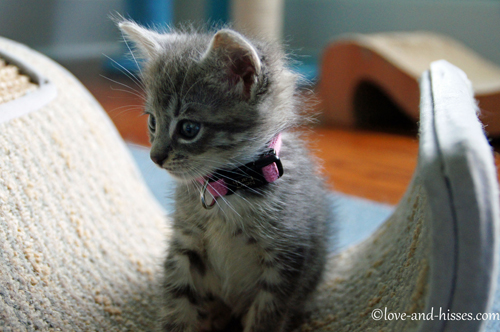 Polly in her pink collar. Unfortunately, that collar wasn’t quite small enough, so I had to replace it with a paper collar (which I colored pink with a marker) ’til her crocheted collar arrives. 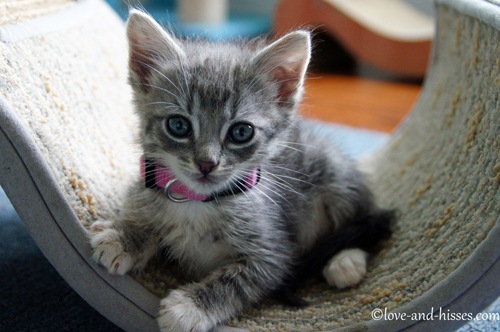 “I am a sassy little monster who rules this litter with an iron paw. Until one of my brothers bites my tail, and then I wail like a big baby.” 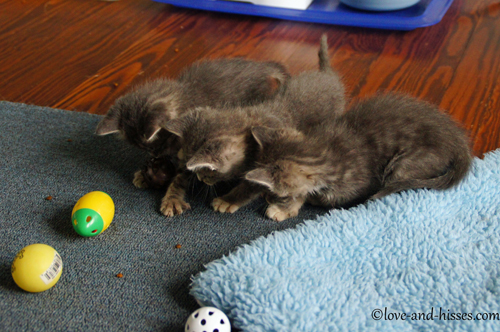 The three silver tabbies, checking out the toys… 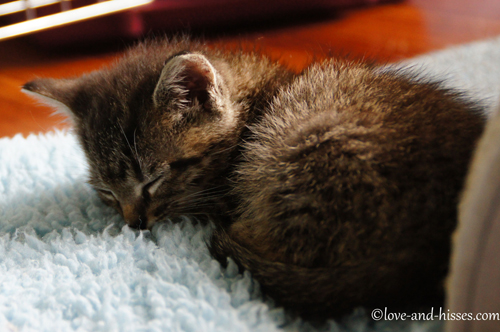 while Joe takes a nap.

These kittens remind me of the Bookworms. Well, the three silver tabbies (especially Percy) remind me of Reacher, and Joe reminds me very much of Rhyme.

About the names: Before I saw this bunch, I had totally planned to name them after varieties of squash and referring to them as the Squashlings. But then I saw them and decided not to because I really want to name a kitten Butternut, and I feel like that name should be saved for an orange (or buff) kitten. Then I considered naming them after varieties of apple, but wasn’t loving the idea (though I am saving the naming theme for a future litter – that seems like more of a Fall theme). Then I remembered that last year I almost got a bottle baby, a little tortie, and I had decided (before I ever saw her) to name her Polly Pickle. The people who found her ended up keeping her, but I’ve been saving the name until I felt the time was right. And the time was right! So, the Pickles they became.

Fred and I both find it amusing to say “Meet the Pickles: Polly, Petey, Percy and Joe!”

Fred was lobbying very hard for me to give Joe the name Tony Rocky Horror (who is the guy in Pulp Fiction (only referred to, never actually seen) who got thrown out of a window for giving Marsellus Wallace’s wife a foot massage), but I put him off by telling him that the next single boy kitten we get will get that name. (I’m hoping a little bit that he forgets.) 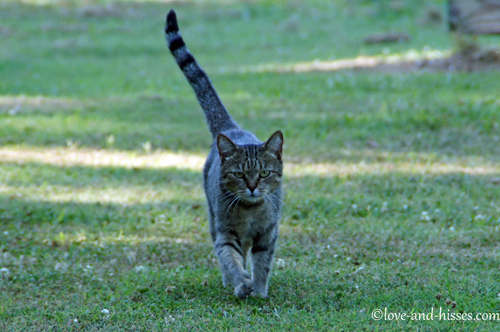 “NO. MORE. KITTENS!”
Sheriff Mama, running across the yard to tell me that I have TOO MANY KITTENS and she’s going to write me a ticket.