What are the sides of the Toastycat bed made of? Is it just cardboard wrapped with the fabric? 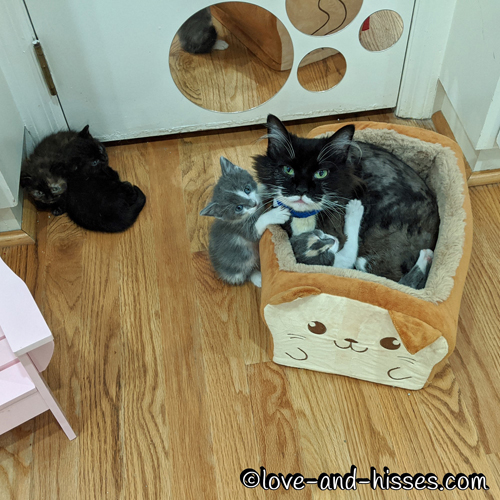 (Picture of Bunny in the Toastycat bed provided for reference, and because I adore this picture.)

It’s made of thick foam – and (my favorite part) the cover zips off so you can wash it!

I’m curious about the purpose of spraying down the room with Rescue spray [after Hensley and Julie went home]. Is it so the Permanents feel comfy in your room again? Is there a human-detectable odor?

Julie and Hensley were being treated for coccidia (in this area, coccidia and giardia are common) and I didn’t want it to spread to the permanent residents or the fosters. Also, the room was kinda stinky after housing a litter box and plates of canned food for a week, so the Rescue spray helped to clear the air.

Any tips on getting cat fur off a “sweater bed”? My Cassia has a knitted (or maybe crocheted, does it matter?) square blanket that came with her from the Humane Society. She likes it a lot, thus is is always covered in fur and it’s a BEAR to clean off. I mean, it never really gets cleaned, I just manage to beat back the fur coating some (via vacuum). If I wash it, it loses a little fur, but mostly it comes out clean, with clean fur attached still (I air dry it). Thoughts?

Eva said: You should try a lint brush, either the kind made with tape or “velcro”. I’d suggest a cat brush, but the teeth may get snagged in the knots of the bed. Throwing it in the dryer (without washing) may help to remove some hair (albeit not all).

How much longer will Canasta have to wear the little onesie?

Probably until she goes home (with frequent breaks) – the kittens are still occasionally snuffling around, and although her milk has mostly dried up, I fear that kittens nursing might bring it back, and I don’t want to chance that.

Not so much kitten related, but I’d really like to know where the lovely new green bedspread came from (if you want to share the source). Canasta looks so elegant against the pale colors! So I guess maybe this question could be considered kitten related after all. 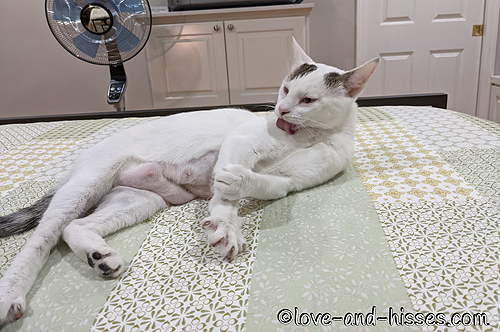 That is the Barefoot Bungalow Juniper Quilt Set. I got it at Kohl’s, but it appears to be out of stock there – fortunately, Amazon has it right here.

Where did you get Canasta’s onesie? I’ve got a foster mama I’ve got to get spayed soon.

Amazon! I got this one right here, but if you search on “cat recovery suit”, there are a ton of different ones. Canasta wears a size medium, and I bought two so that I can wash one while she’s wearing the other (I swap them out every morning, even though they’re perfectly clean and she could probably wear the same one for a few days.) They come in different colors and sizes.

Did you ever see the kittens trying to nurse on the onesie?

Yes! Slapjack was trying to nurse on the onesie yesterday and Canasta looked disgusted and walked away. 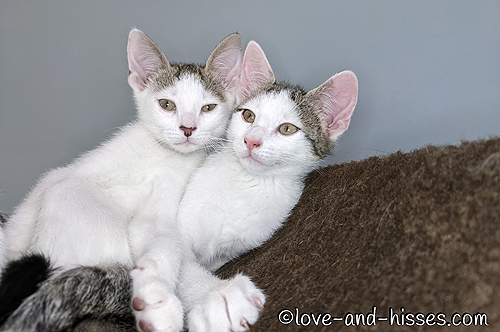 Whist and Fizzbin have a snuggle. 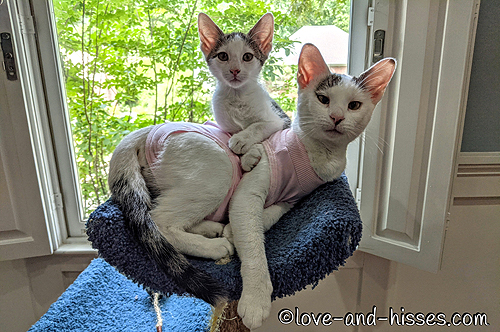 Canasta and Fizzbin have a snuggle (those EARS.) 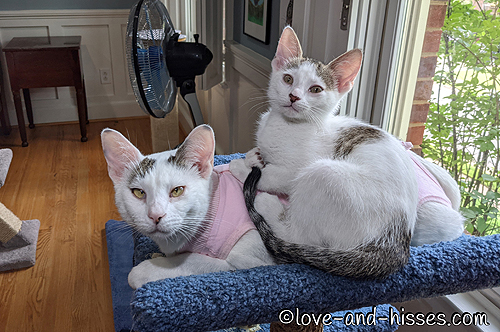 Whist would like you to know that Mama makes a comfy bed. 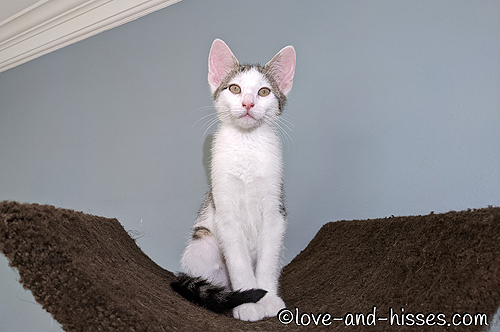 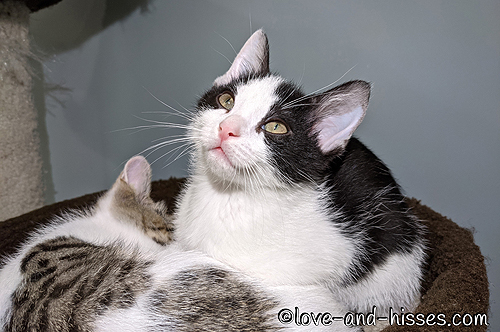 Uno has a think. 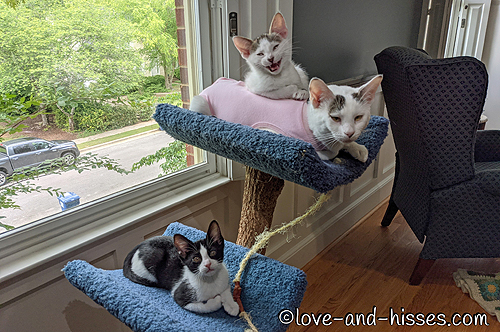 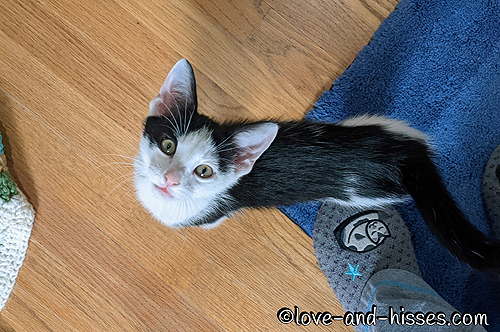 Slapjack would like to know just WHAT is going on. 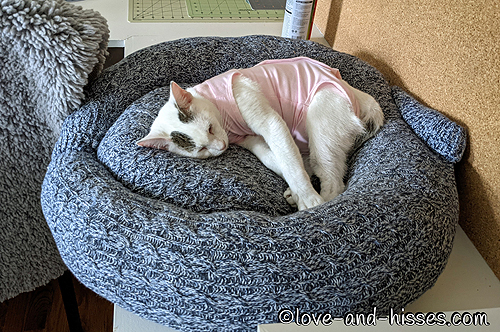 Canasta discovered this sweater bed and found it comfy. Then the next time I went upstairs… 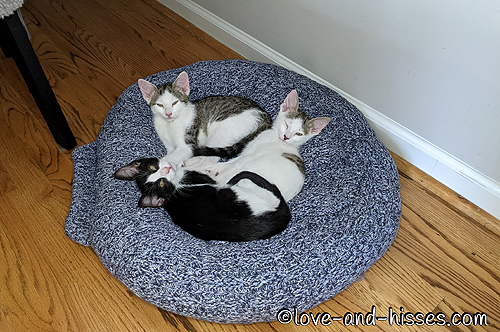 It had been knocked onto the floor and filled with Fizzbin, Whist and Rummy. 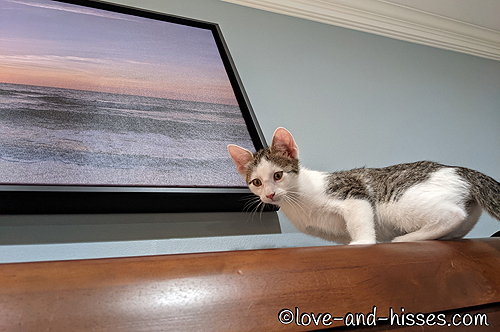 Fizzbin balancing on the headboard. 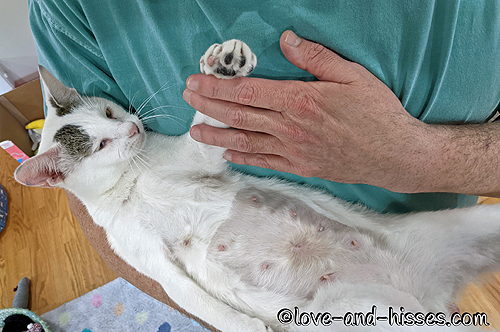 Here’s a look at what Canasta’s belly looks like now. Flat and furry!

The kittens are 11 weeks old today! I haven’t weighed them today yet, but I will and will update their page (there’s a weight table at the bottom of the page) when I do. As of right now, everyone is adoption pending except for Pinochle and Whist. The kittens are scheduled for their spays/neuters on the 25th, so they’ll still be with us for a little while longer. Canasta should be headed home on Monday, then Uno at the end of the month and Rummy and Slapjack in early June. (I don’t think Fizzbin is scheduled to go home yet, but I think at the end of the month is likely.) Our babies are growing up! I’m, as always, amazed at how fast this process goes. 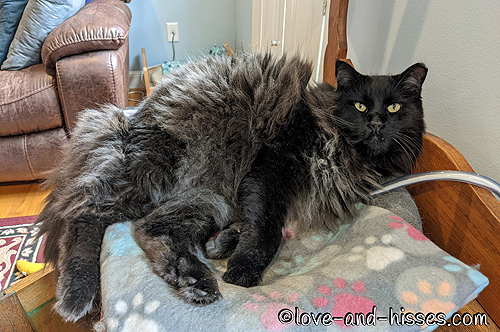 There’s a heated bed under all that floof. It’s been a cool spring for us, so the cats are still taking advantage of the many heated beds in this house. (Though to be honest even if it were mid-July and sweltering out there, they’d probably still gravitate to heated beds.)