Reminder: the Forgotten Felines of Huntsville auction starts TOMORROW at 9 am (central time) – don’t miss out! Go check it out here!

Robyn, you mention that having a nursing mother being adopted or going to Pet Smart is a sudden cut off for her babies, but isn’t putting a onesie on Canasta the very same thing, a sudden and drastic cut off from nursing her kittens? I wonder if she is uncomfortable and full from being unable to nurse…….. (This comes from a mom who nursed her children, not the same but then again, the same LOL)

It is a sudden cut-off either way. But at least doing it this way she’s here, still with her babies, and I can monitor her for signs of discomfort. And the kittens still have her around for cuddles and baths rather than them nursing one minute and her gone the next. I just really don’t want to send her off to her new home still producing milk.

Awesome pic of Dewey, Robyn! Depth of field is amazing. Is this a mobile phone photo, or were you able to get your real camera set to get that perfect focus on his face? Your photography skills was what attracted me to your blog in the first place, oh so many years ago.

Thanks! That was from a camera picture – I have a small Sony DSC-RX100 that I’ve had for years, and I recently took it out to see how pictures with it came out. Dewey was conveniently right there.

These days, though, I take almost all my pictures with my phone (it’s a Pixel 4a) because it’s nearly always close at hand.

My mom had a mama and daughter pair, too. Mama got to the point where she didn’t want a thing to do with her former kitten. Mom had the two of them for at least 15 years, and for the last 13, mama totally ignored her daughter. Daughter tried to be friendly with her mama, but mama always said nope!

I kept a Mama and kitten together. Two years later, they barely tolerate each other. Mama Pum’kin is mellow, but baby Lupe will stalk her and start fights. They rarely cuddle and the only time they are close to each other is when they eat a meal.

In my experience, when kittens are grown, mamas are D-O-N-E. There are the occasional mother-and-kitten bonded pairs I’ve heard of, but I’ve never seen that myself.

Did the Ham-micks disappear with Charlie’s visitation privileges by design? I suddenly realized I hadn’t seen the Cardshark kittens treating ’em like an ambush cave/trampoline combo.

I put the Ham-mick away at some point when I was cleaning the room, and forgot to get it back out! I think it’s about time for the Fruitasan to be put away (the kittens are ignoring it now), so it’s time for an introduction to the Ham-mick!

I swear the tabbies all have bags under their eyes. Are you waking them from their beauty sleep?

Isn’t it funny how they sleep 23 hours a day and they still look exhausted? Maybe their daddy was a Basset Hound!

I wondered about eye buggers with this bunch. It seems to me that cats with all white around their eyes and no dark liner tend to have weepy or buggery eyes. Is that how it is with this group? I’ve also noticed that some of them more and more seem to be getting their momma’s uniquely shaped eyes, especially the ones with all white, which makes me wonder, are her eyes slightly squinty because of the white or is it just an inherited feature that’s so striking. Squinty and very tilted = exotic and pretty.

I think it’s that the white around their eyes makes the boogers more easy to spot. These guys, eye-booger-wise, are about the same as previous litters, they’re just easier to spot (that’s just my theory, but oftentimes Khal will be sporting a great big ol’ crusty booger in the corner of his eye and I don’t notice until he’s right up in my face).

Canasta’s not really squinty, she’s just drawn that way. 🙂 When I first got her, I thought she was having eye issues, and put ointment in her eyes for days before I realized that’s just what her eyes look like! 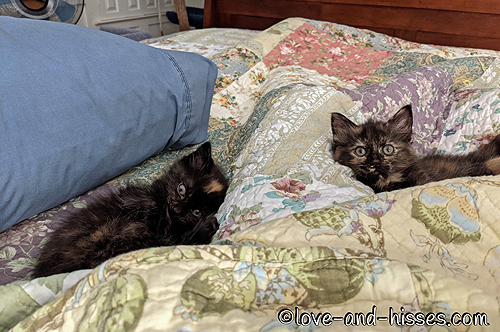 Hensley (left) and Julie. These girls are just the SWEETEST. They should be headed home this weekend. 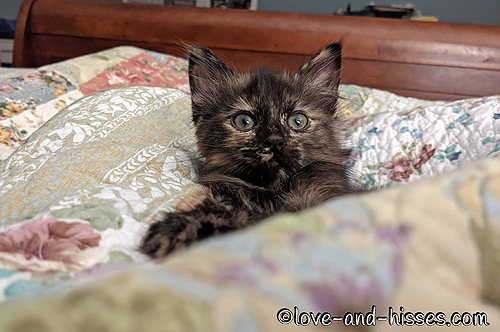 Julie has a smug. 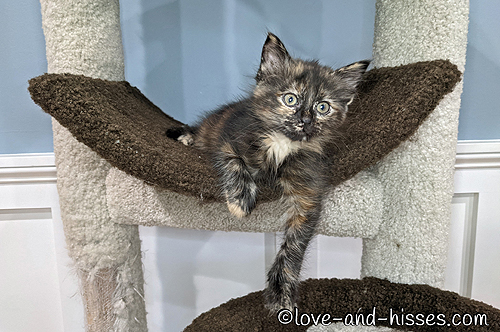 Julie is very fond of this cat tree. 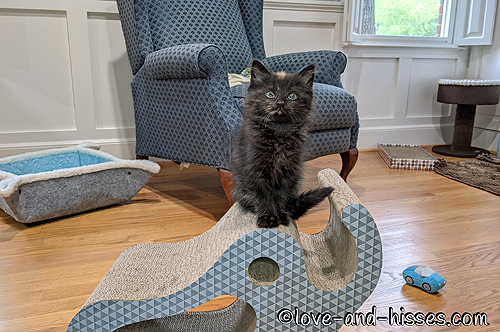 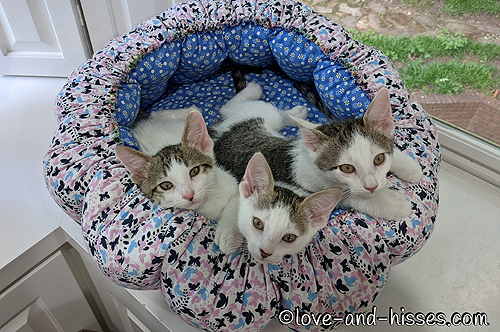 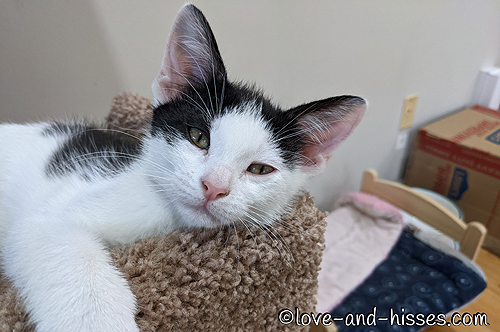 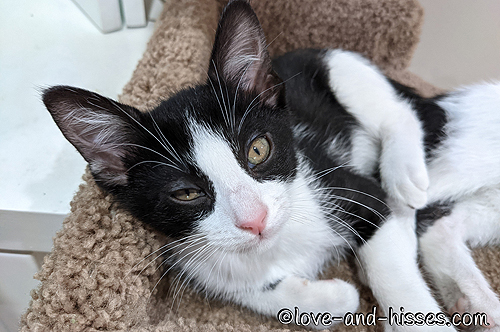 Rummy has a skeptical. 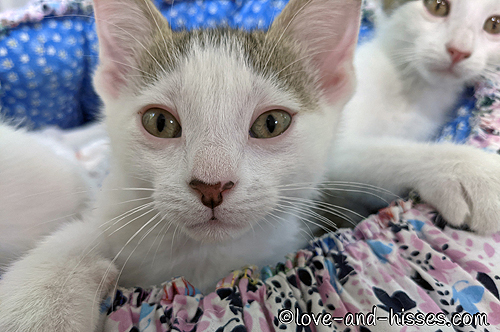 Whist’s nose is still getting darker. I wonder if it’ll end up black when she’s grown. 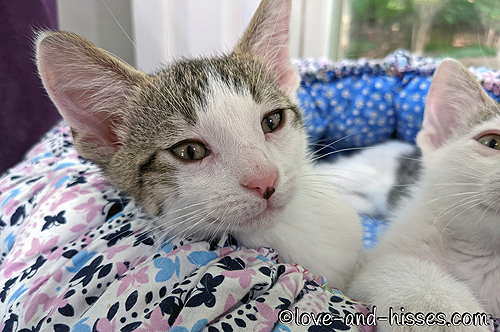 Pinochle’s nose freckle seems to be staying about the same. 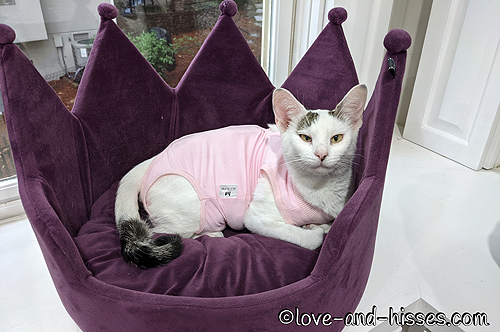 The Queen in her onesie looks pretty happy. 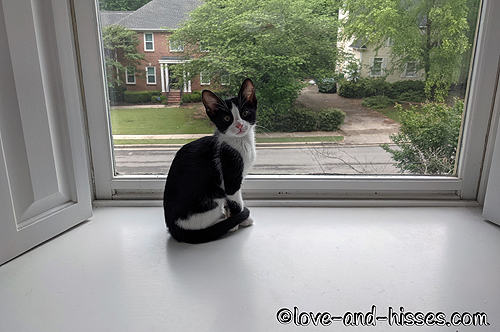 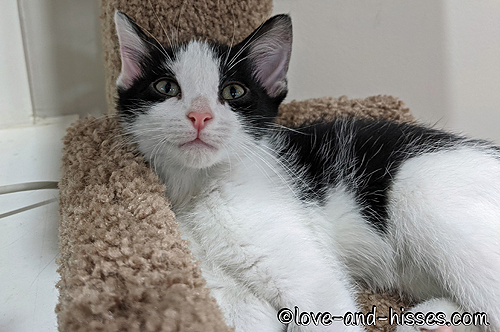 The kittens are 10 weeks old today, by the way. If you missed yesterday’s post, or allll the posts on social media, Forgotten Felines of Huntsville is taking applications for them now. You can email them at info (at) ffhsv.org to inquire – but better hurry, they’re a hot commodity! 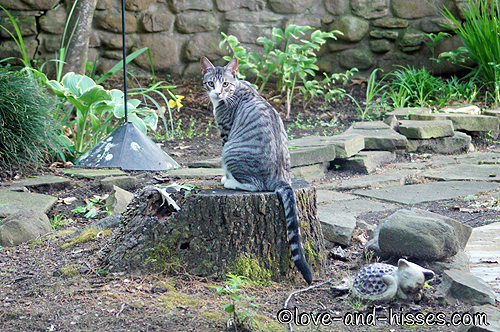 Charlie shows off his fabulous stripes.