Bob, Jim, James, Albert, Susan, and the rest of the Public Relations team –

Please see the attached report, which states that the “Free Hellcat with each case of water purchased” campaign turned out to be more successful than we could have ever imagined. We admittedly had a few glitches to work out at first (Susan, so sorry to hear about your pinky. The first round of Hellcats were unfortunately faster and meaner than we expected.), but once we realized that the Hellcats had to be muzzled until removed from the case of water, things went smoothly.

Congratulations on a job well done, all of you! If everyone hadn’t pitched in, I suspect this promotion wouldn’t have gone nearly as well. (Bob, so sorry to hear about the eye. Who knew that Hellcats enjoy ripping eyeballs from your face and then batting them around the room? For that matter, who knew eyeballs would bounce so well?)

Since the Hellcat promotion ended there have been many extremely upset families who want to know, in the words of one unhappy father “Where the hell our Hellcat is.” He went on to add “We been promisin’ Cecil that if he passed second grade we’d get ‘im one o’ them Hellcats. Does I gotta sue you jerks to get my Hellcat?”

Joe in Legal did point out that since we kept the Hellcat promotion going up until the end date, as stated in size 1 font at the bottom of every ad, we fulfilled our legal obligation and while families can tie us up in court for a few years, their cases will ultimately be tossed out.

(Speaking of Joe in Legal, please make sure that at least one person from Public Relations is seen at his sister’s funeral. Who knew that two Hellcats in one house could cause a house to actually move three feet off the foundation, squishing like a grape anyone who happens to be working in her garden at the time?)

But we do like to make families happy – the screams of joy from families who have their own Hellcats ring in my ears every evening and make me smile as I walk down my street after dinner – and so Alfred and David (may they rest in peace) finished up research into a new project shortly before the lab was taken over by those angry cats who set fire to both men before escaping through an inconveniently open window (who knew that animals with no opposable thumbs could work lighters?).

Ladies and gentlemen, I present to you the new campaign for March 2007: “Free HateCat with each case of water”! Find attached pictures of a sample case which has had the aforementioned HateCat (we went with a gray prototype this time around) inserted and is ready for shipping. The stump of a tail rather than a full-length tail prevents cases from jamming up on the shipping queue (a rather ingenius suggestion from the late Dr. Craig); I feel certain that we’ve worked out the glitches involved in the HellCat promotion.

This is going to be our biggest promotion yet; please be sure you review all the attached materials, and whoever in Public Relations bears no sign of Hellcat injury (Jim? I know you lost a couple of toes and a chunk of your right thigh, but those injuries are easily covered.) needs to take responsibility for being the face of Acme for the duration of this promotion.

Again – job well done, folks. If you have any questions, feel free to contact Mark in Containment and Taming. Dealing with the HateCats is quite similar to dealing with the HellCats – don’t make eye contact, be sure you’re wearing mesh suits (face covering too, please, as I’m sure Ned in Shipping would tell you, if his lips hadn’t been ripped off and eaten by a remnant HellCat last week), keep one hand on your can of mace at all times (in the eyes, folks, or the mace has no effect at all. You have to aim – panicking and spraying mace in the general direction of the HateCat does none of us any good) and a bag of organic catnip in the other at all times. I know you all know this, but I’ll repeat it just in case: should you inadvertently make eye contact with a HateCat, look away immediately, throw an open bag of catnip at him, and RUN. If they run you down, go limp. They’ll chew on any exposed flesh for a few minutes, but chances are good they’ll leave you alive. (Pete in Receiving being the exception that proves the rule, of course.)

The HateCat is a patented volatile mix of Ah Needs me Some Love® mixed with the highly secret formula (developed by the late Dr. Craig before his unfortunate death) hereafter known as Ah Hets Yew®; for the love of god, don’t be lulled into complacency by the deep musical purr and stumpy-tail-thumping of this animal. Be on guard at all times. We managed to only lose 17 people with the HellCat promotion, but another 167 were seriously injured and are on leave indefinitely. I’d like a lower number during the HateCat campaign.

Everyone have a safe day – and be careful out there! 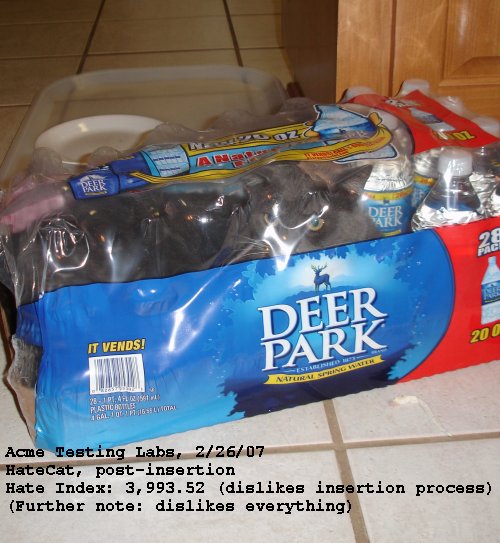 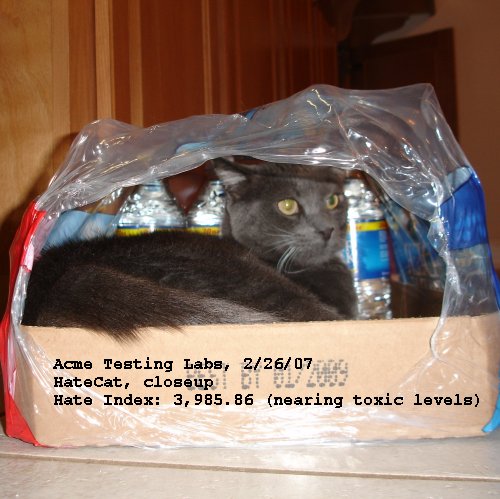 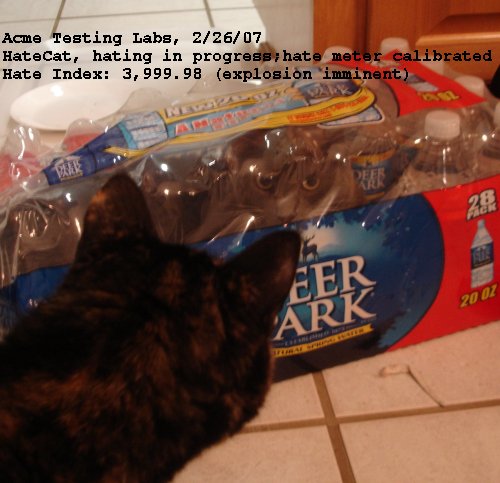 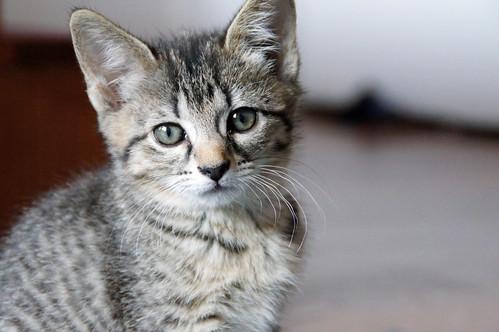 “Where’d the lady go who takes care of us? I mean, not that I MISS her, because that guy is super funtimes and I’m SURE he’s going to let us have the run of the house soon because that lady asked him not to while she was gone and he NEVER EVER listens to her.” 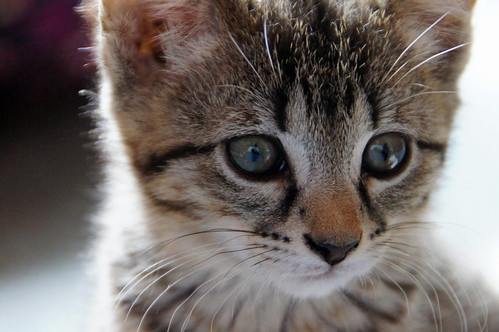 “I would LIKE to have the run of the house!” 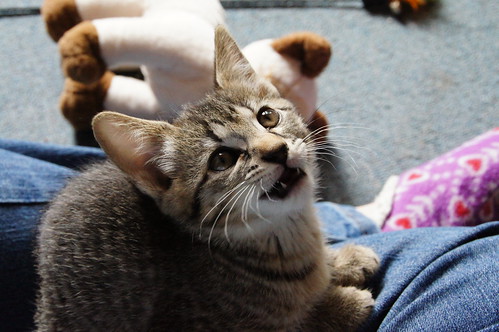