SC Amy posted this in the comments yesterday, and I wanted to post it here in case not everyone reads the comments (if you don’t, you’re missing out, though!) :

Question to the group. Sadly, my mama cat Tabitha, though healthy, has tested postive for FeLV…postive on her first ELISA, negative on the IFA, but today positive again on the second ELISA. Her kittens were negative though on their ELISAs. After much discussion with my vet, we think I need to find Tabitha another home since I have 3 FeLV negative cats in the house (she and the kittens have of course been kept isolated from everyone since I first brought her in the house). I have located a sanctuary for FeLV positive cats near Charleston, SC called Suzie’s Zoo, and made initial contact with Suzie after the first test result came in (hoping the best but preparing myself…). Has anyone dealt with this rescue before? I’ve looked at their Facebook page and they appear to do a lot of good rescue work in the area. The rescue will try to adopt Tabitha out to someone who will take a positive cat on, or keep her there for as long as she lives.

I am keeping the kittens for now with my vet’s support, and he has actually adopted one of them himself! We will test again in a month, and then we will find them homes one way or another. But any positive thoughts or suggestions would be appreciated!!

About Rupert (see yesterday’s entry if you don’t know who Rupert is) : The first time I saw him, he was on the front porch cam video, and he looked like a young cat to me, because he looked small. He showed up there several times, and never showed any interest in the food. And then, one day last week, I looked over at the side stoop, and he was sitting there eating. I watched him for a few minutes, and then I went over and opened the door verrrry slowly. As soon as he knew I was there, he was off like a shot. Over the next several days he showed up more and more often, and Fred started trying to be his buddy (at one point, Fred was laying on the driveway, half under my car, talking to Rupert, and Rupert was like “DON’T TALK TO ME, I DON’T KNOW YOU.”). Rupert and Newt clearly knew each other, because they seemed comfortable around each other, and Rupert would walk over to Newt, flop down, and roll over on his back to show his belly.

It wasn’t long before Rupert let Fred pet him, and we were going to wait a a little while to cart him off to the vet, but I didn’t have any plans for Thursday and we both feared that if we waited he’d disappear and we’d never see him again. So when Fred got home Wednesday, he grabbed him up and we put him in a (large) soft-sided carrier with a small litter box and a bowl of water, and yesterday I took him off to the vet.

Fred had noticed that Rupert was limping, and as it turned out, one of his dewclaws had been sheared off, and his claws were all in bad shape, as if he’d been digging at something. They cleaned him up and gave him an antibiotic shot, and when I got home with him we set him up in the crate in the garage, where he’ll spend the weekend recovering.

Now that he’s been neutered, we’re going to start asking around to see if he might belong to anyone in the area. See what we did there? Took him off to be neutered without asking around first? It’s easier to beg forgiveness than ask permission, I always say.

If he doesn’t belong to anyone, we’ll likely add him to our gang. He and Newt seem to like each other, and Fred likes him, so.

PS: Rupert also seems to have a bit of a crush on Maxi, so I need to get a picture of them together. Too cute! 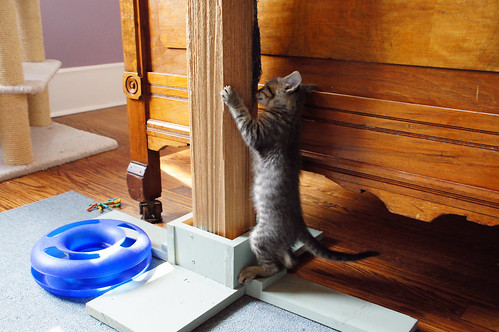 Newbery on the scratching post. I am fairly certain that he could fit those great big bunny feet in my size 8 1/2 women’s shoes. 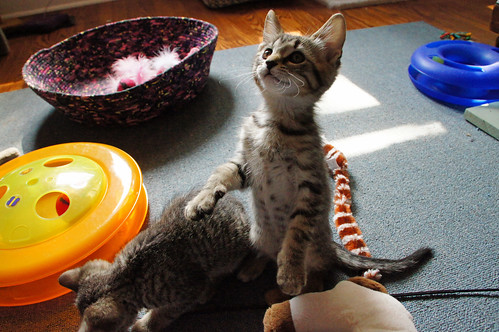 Always so amused, that boy. 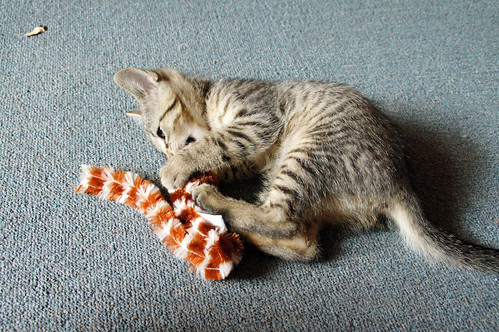 Darwin’s got quite a set of bunny kickers, too. 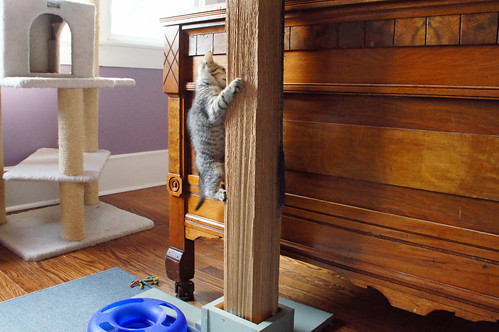 They love to climb this thing and then perch on the top. 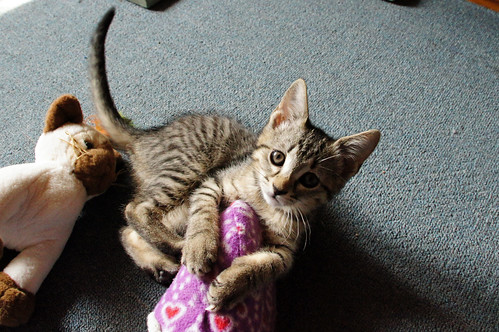 Noms video! We introduced them to da Bird, and they think it’s pretty awesome.

I muted the sound because my stomach was going nuts (it was right after dinner). One day I’ll figure out how to lay a jaunty little tune over the videos. In the meantime, enjoy the zen-like silence of the video!

In March of 2010, Fred called from work to tell me that under the same bush where he’d found the Wonkas the previous September, was a new batch of kittens. The mother cat had been spotted running around in the area, and we decided that rather than bring the kittens home right then, he’d leave the kittens where they were, and we’d attempt to catch the mother cat so she could stop bringing these kittens – awesome as they were – into the world. He took the trap to work with him the next day and set it up in the early morning. When he stopped to check the trap on his way home, the kittens came spilling out from under the bush where they’d been, and he was worried that they’d wander into the parking lot, and decided to bring them home. He re-baited the trap and brought the kittens home. 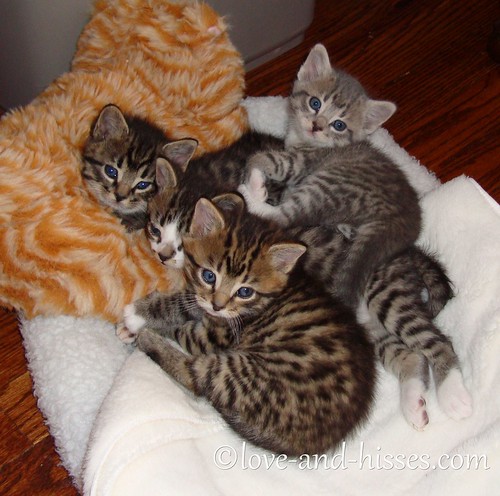 That litter of kittens – four boys – were the Bookworms, and Corbett was one of them (the other three were Reacher, Bolitar (who became Buster), and Rhyme).

(When Fred checked the trap the next morning, their mother was inside. She was terrified, and when I picked her up and took her to the vet, we found that she was not only FIV positive, she was pretty sick. I made the decision to have her euthanised.)

I will be honest with y’all, I did not know initially that Corbett (who was named after Matthew Corbett from the Robert McCammon series of books) was going to turn out to be the most beautiful cat on the face of the planet. He and Rhyme were both brown tabbies, and I actually had a hard time telling them apart. 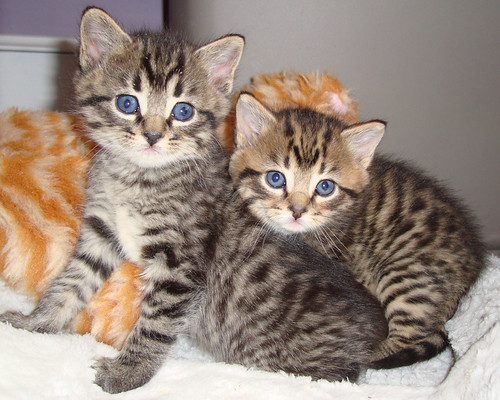 (Though of course NOW I can look at pictures of them from then, and immediately know which one is Corbie. He’s on the right in that picture.) 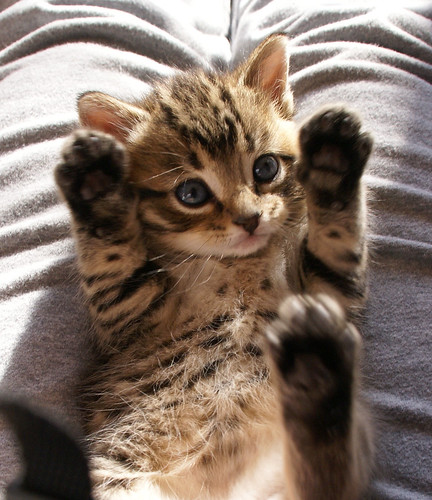 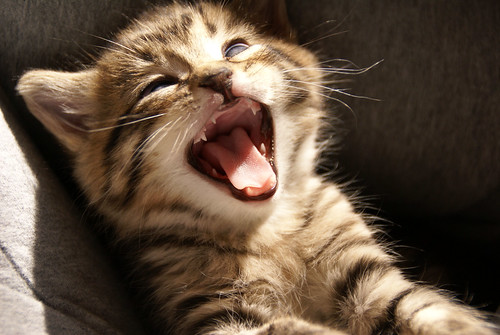 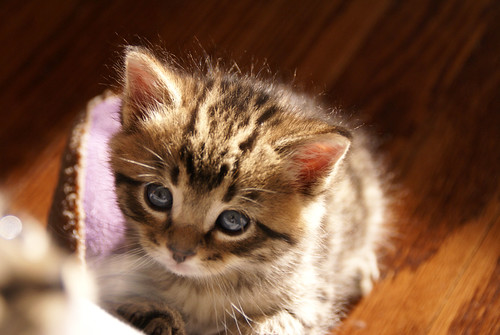 The Bookworms were here longer than kittens usually are, because we waited a few months to have them retested, and then by the time they were ready to go, there were a bunch of kittens waiting to go ahead of them. When they finally went to Petsmart, they had developed a strong fear of strangers. Eventually, all four of them ended up back here.

I honestly believed that we were going to end up with all four of the Bookworms here with us. But then someone wanted to adopt Bolitar (Buster). Then Rhyme and Corbie went to Petsmart, but Corbie wasn’t eating, and we were pretty concerned with how thin he’d gotten, so we left Rhyme at Petsmart, and brought Corbie home. Rhyme was adopted, and then a few days later Kathy adopted Reacher, and that left Corbie here with us. 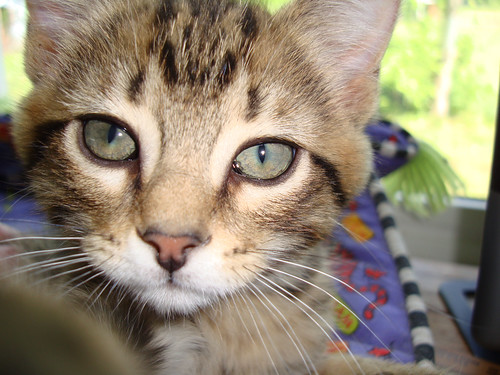 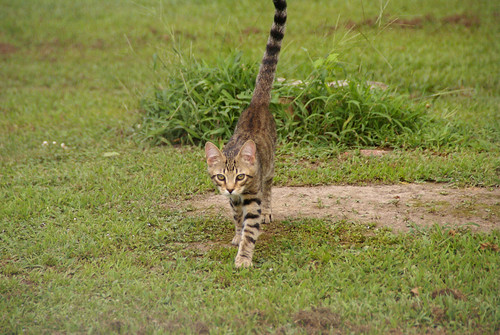 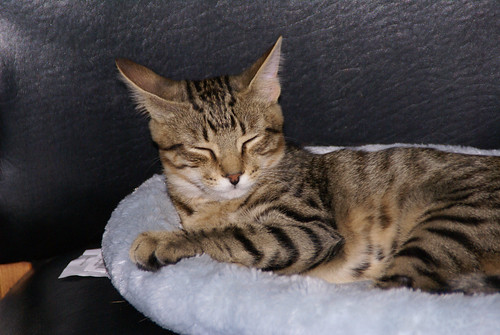 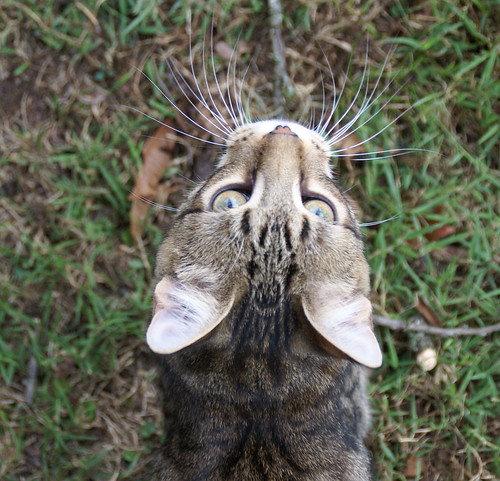 At that point, I was pretty sure that we were going to be keeping Corbie, but it was another month or so before I asked Fred if I could make it official, and he agreed.

I know not everyone sees it, but I think Corbie is the most beautiful cat ever. But he’s not just beautiful, oh no – he is a sweet boy, and he is a GOOD boy, and if he thinks you have a treat for him, he is a HAPPY boy. He has a box in the kitchen that he’s claimed as his own (though other cats will occasionally lay in it). It’s his safe place, and if he’s worried or feels threatened, into the box he goes. He likes it when you hide treats for him under the the brown paper in the box. You know, it’s the little things that make him happy.

He’s a good friend to Jake, and he likes to play with Elwood. He’s happiest, though, when he’s rolling around in the sun on the cement pad in the back yard. He likes to be petted, and he adores nibbling on the fingers of one of your hands while you’re petting him with your other hand. 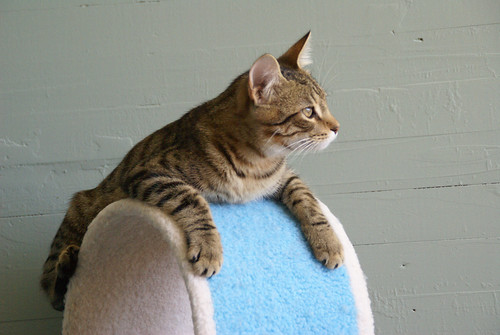 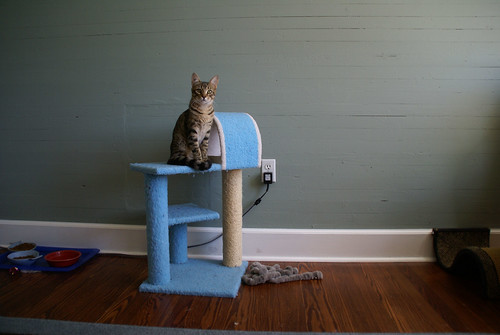 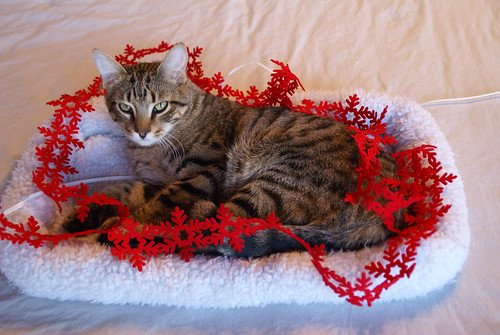 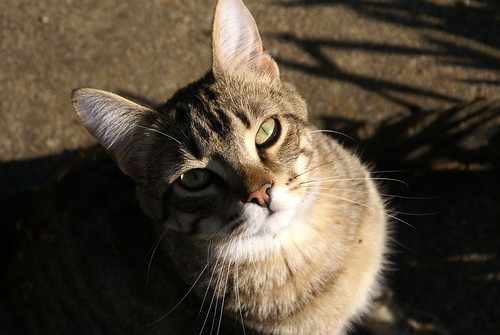 Nicknames: He’s probably the only cat in the house who has no nicknames at all. He’s just Corbie! Well, I guess Corbie IS his nickname, since he’s listed as “Corbett” at the vet’s office.