Ok everyone, what is Churu? Must be great, looks like the kitties are hooked on it.

Churu is a liquid-based puree that comes in a tube. With the kittens, I like to tear the top of the tube off and feed them straight from the tube; you can also squeeze it out onto a plate (that’s how our permanent residents prefer it.) I don’t know what’s in it, but I have only had a very few kittens who didn’t LOVE it immediately.

How often do you foster? I can only imagine how hard it is, but you are amazing. Unfortunately, there will always be a need for foster moms/dads. How will I know if/when you’ll be fostering again?

I foster pretty much continuously, but only one litter/group at a time. And you’ll see the new fosters here on the blog or on Facebook/Twitter/Instagram/Tumblr. I do not know who my next set of fosters will be or when I’ll get them – sometimes I know in advance, sometimes not. We do have some work being done on the house the first week of June, so there’ll be a gap of at least a few days between the time the Sprouts go home and the new fosters move in.

I’m curious. I know I suspected Bramble would turn into this litter’s biggest lovebug (speaking only of the kittens here, as we already know Mimosa is a lovebug), but was I right?

The biggest lovebug of this litter has actually turned out to be Mondo, with Hollyhock just a smidge behind him. They’re all turning into snugglebugs ever so slowly, but Mondo is always the first one to run over and see what I’m doing and to get a snuggle and belly rub.

The kittens are masters of ballet, yoga, and zen. Do they all have yellow eyes?

They do all seem to have amber/yellow eyes at this point, though in some lighting they look a little more green.

Thanks to Robyn’s photos of kittens with Churu, my 11 year old Russian Blue (Mama Mischief) now has a Churu habit. She sends her love.

I know that sweet “Newtles” is 16 years old. I, too, have a 16 year old cat who has good and not so good days as far as energy is concerned. Does Newt have any senior age issues? With all your experience, do you have any suggestions to keep senior cats healthy and active?

Newt has slowed down a bit in the past few years – he moves more stiffly and hesitates before jumping/climbing. We started him on Cosequin a few years ago, and it seems to have helped. He moves stiffly still, but not AS stiffly. And we’ve made it a bit easier for him to get up on the bed and cat tree he really likes.

I always recommend Liqui-Tinic for older cats who aren’t doing well (and I’ve used it on fosters who aren’t doing great, too.) I have gotten Liqui-Tinic from Amazon in the past, but don’t see it there now. You can get it from Walmart, but a Google search will probably show you other places to buy it. We first heard of it in 2013 when Spanky was 17 years old and starting to fade. The vet recommended it – called it a “blood builder”, it’s just a vitamin and iron supplement. I wrote about it in this post from early March 2013.

Fred made this collage of Spanky – the bottom picture was taken 5 weeks after the top one. 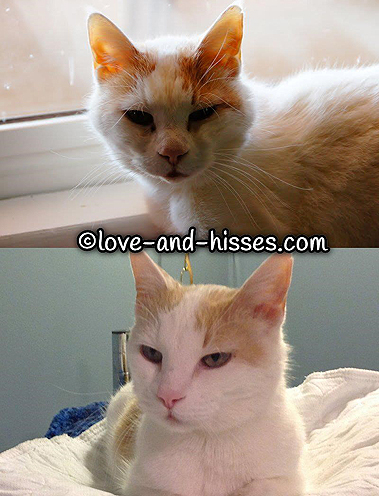 We lost Spanky about three weeks later, but I credit the Liqui-Tinic for giving us more time with him than we would have had (time where he was feeling good and acting like himself), and so it’s been my go-to ever since.

(Also, I have somehow found myself in the routine of giving Newt a can of cat food when I come downstairs in the morning – in addition to the canned food he gets only a few hours earlier when Fred feeds everyone – and of course now he expects his extra canned food every single morning. And y’know? He’s 16 years old, he’s never given us any trouble, he’s a good boy, I can roll with spoiling the old guy a bit.)

How much does the Magnificent Khal weigh?

About 14 pounds. (It’s been about a year since we weighed him last, but I don’t think he’s gained or lost weight.)

Emmm. I hope it’s not too indelicate to inquire, but I assume the onesie must be positioned just so in order to allow for visits to the litter box? I just can’t quite picture/believe it, haha, even after scrutinizing the available photographic evidence. I’m not asking for photographic evidence, mind you. (Or am I? No, I’m not. Am I?) I hope you don’t mind me asking. “Enquiring minds” and all that.

I’ve gotten this question a lot! The back end of the onesie is cut out really well – there’s basically a strap on either side that goes around her back legs, but the rest is empty space. I didn’t understand how it worked either, but there’s never been an issue with it getting in the way and she never gets anything gross on it (and she has 3 of them, so I switch them out every couple of days and wash the ones she’s worn). (I’ve never gotten a picture of her onesie-wearing back end, so you’ll have to trust me when I say it works surprisingly well.) 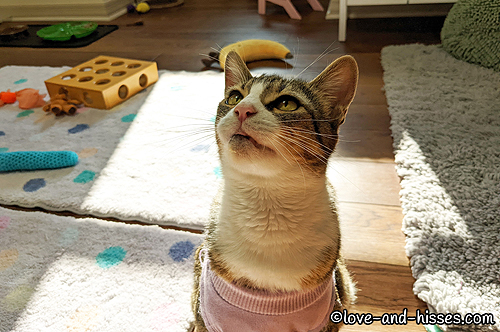 There was, indeed, a Churu up there. 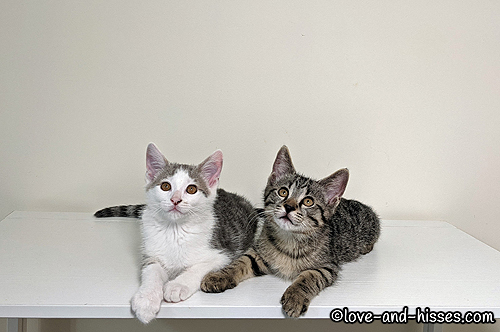 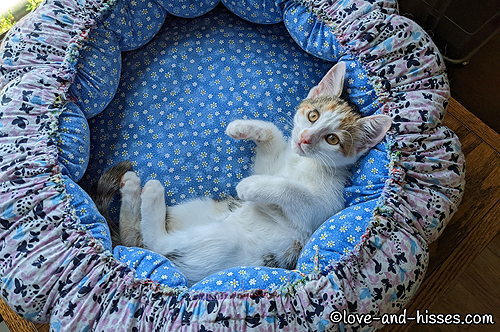 Hollyhock loves to climb into the Puffy Bed and chase her tail. 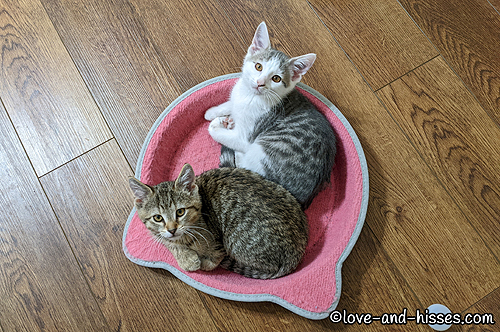 It’s a Kudzu-Clover pie! My favorite! 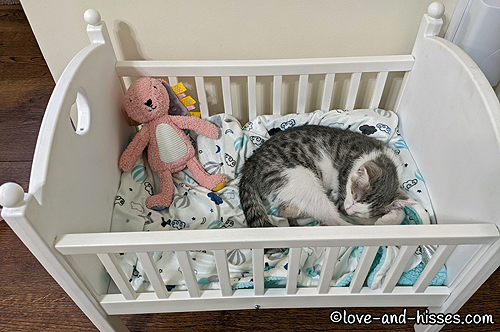 Kudzu did, indeed, put himself in that crib for a nap. 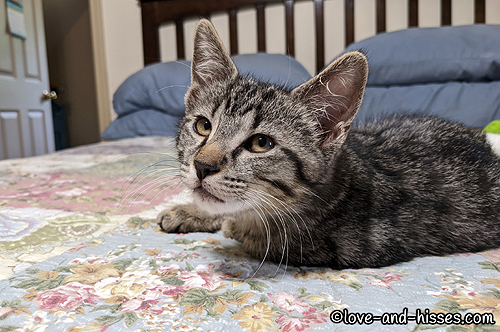 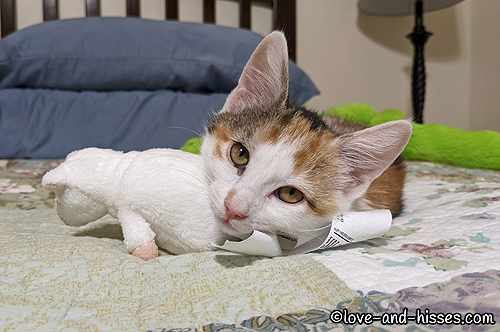 A girl and her rat. 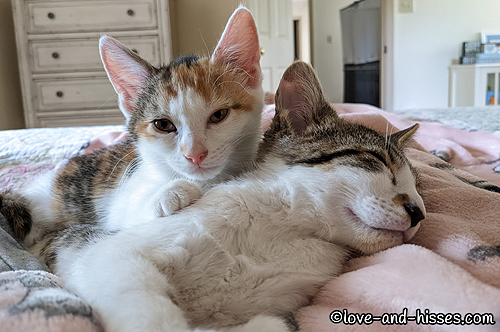 And a girl and her Bramble. 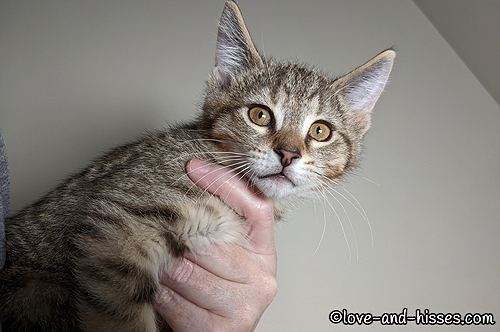 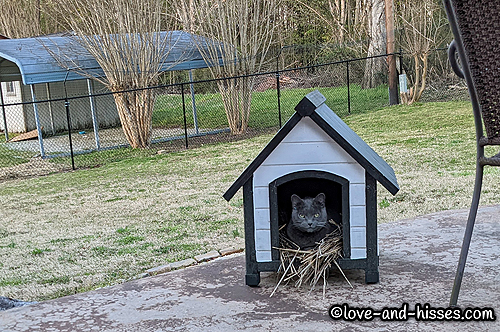 Jake sure does love hanging out in that house while lookin’ loony. 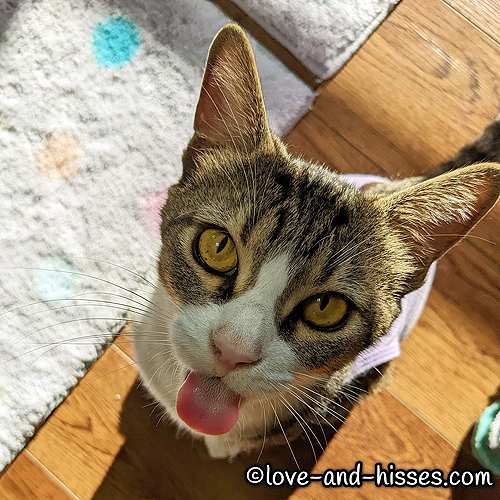 It’s Thlurrrpsday, and Mimosa is all “Right here is where you put the Churu, lady, and then I will thlurrrp it up.” 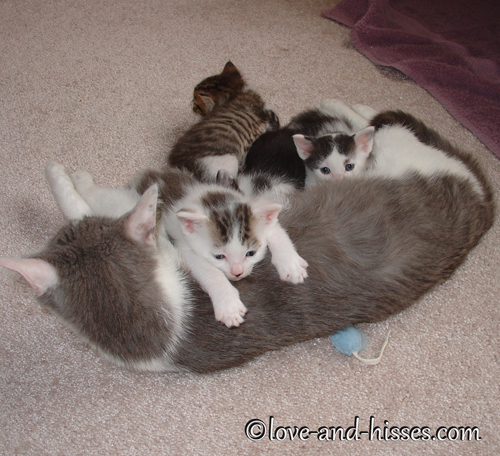 Today marks 17 years since our very first fosters: Mia and her 5 kittens (boys Snoopy, Edgar, Oy, Peanut and girl Flossie.) We took time off from fostering from the end of 2005 to mid-2006, but otherwise we’ve been fostering pretty steadily ever since. We started out fostering for Challenger’s House, and currently foster for Forgotten Felines of Huntsville.⁠
⁠
To date, including the current fosters, we have fostered a total of 464 cats and kittens. And I have written a total of 4,428 blog posts!⁠
⁠
When I go back and read about my experience with the first fosters, I know one thing for sure: I’ll never have a carpeted foster room again. 🙂⁠
⁠
(You can read the very first Love & Hisses blog post here.)

YouTube link
Children, gather around. Back in 2005 when one had to have a “camera” to make a video and also to take pictures, before social media existed (we had to post on forums to complain about things. FORUMS! Both ways in the snow!), I had my very first foster litter, Mia and her 5 kittens. This is the only video I can find of that litter (which isn’t to say that there aren’t more videos of them on my hard drive, just that I’m not combing through 3,181 videos with titles like “Kittens038” to find more.)(I title my videos with more descriptive titles – and dates! – these days, but for many years I… did not.)

I don’t recall what kind of camera I was using at the time, some kind of Sony is all I can guess, but I have to admit that I’ve seen worse pictures.

(Audio is Billy Goat Stomp by Joel Cummins from the YouTube Audio library. I was going for something old-timey sounding.) 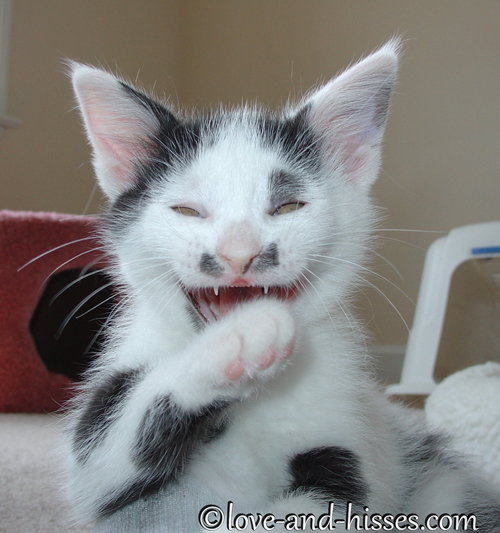 Throw Back Thursday: Back in the olden days, before Instagram and Facebook and Twitter and TikTok and whatever else the kids are using these days, I posted kitten pictures on my blog and hosted them at Flickr (both of which I still do). This picture of our foster Flossie – one of our very first fosters in 2005 – remains my most-viewed picture at Flickr. She sure was a cutie.

YouTube link
Throw back Thursday:”Pa! You ain’t got no milk bar!” In 2019, when we were fostering Charles and Caroline and their kittens, the kittens (in this video, Almanzo) were always completely baffled by Charles’s lack of a milk bar… but that didn’t stop them from checking, just in case! 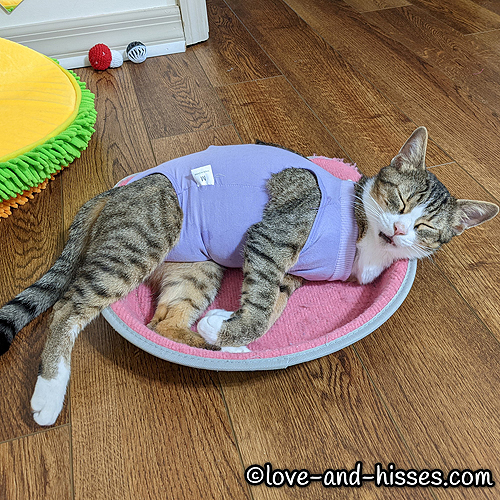