Is the person(s) who is adopting sweet Clover the one who came to meet him last Friday? Just curious.

Yep, the people who came to meet him are indeed the adopters!

Will the kittens (except Clover) go directly from the vet to their forever homes or will they recover a few days with you?

They’ll come back here for a few days. I expect Hollyhock and Bramble, and Mondo and Kudzu will go on Saturday (but will touch base with the adopters to firm up plans once the kittens are through their surgeries.)

Newt definitely needs a 2nd breakfast. I say once any of my cats are old enough to get their drivers license, they have earned some special privileges.

My cats prefer Tiki brand “stix” to Churu … other brands are finally getting in on the ‘meat tube’ trend! So if you can’t find Churu, just keep an eye out for tall skinny packaging in the treats section.

I’m sensing the need for a video in the future where the kittens have a taste test and decide which one they like the most.

Wait. Mimosa went away with an Amy, but Clover will also go with an Amy? Are they ALL Amy? LOL! Or did I just get confused somewhere?

It’s Amys all the way down! (I kid. Mimosa went with Amy, Clover is going with Amy, but they’re two different Amys.)

I love how pic one of climbing Hollyhock has one spectator, the more came out to watch the Mighty Ms Hollyhock attempt her (Thanks to Ms Robyn) death-defying act.

She might be the smallest of the litter, but those boys know that she’s the leader and if there’s trouble to get into, she’s the one to watch!

I have so many pictures of them from when they were tiny where she was right in the middle of them, and I think it’s because she knows a true agent of chaos leads from the middle! 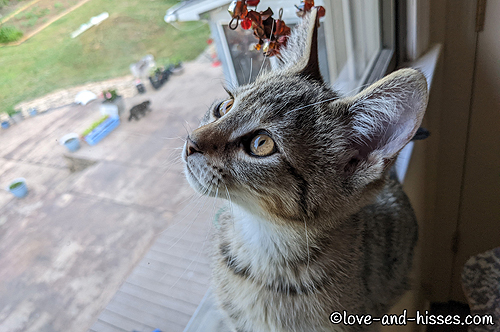 Clover in the window, watching a fly. (Bonus: if you look past Clover at the blue planter, you can see a big mass of floof. That’s permanent resident Khal stomping around the back patio.) 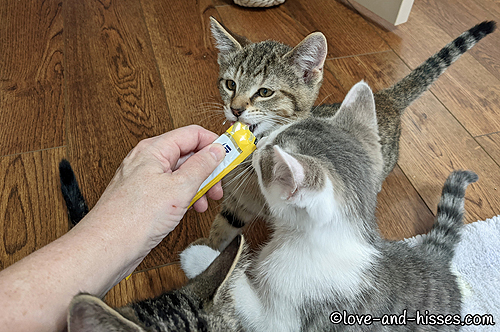 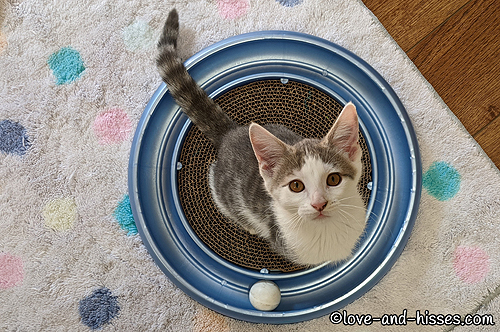 Kudzu (on the track ball toy) from above. 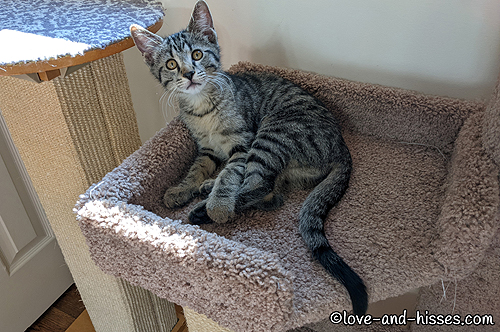 Mondo’s all “Did someone say Churu?” 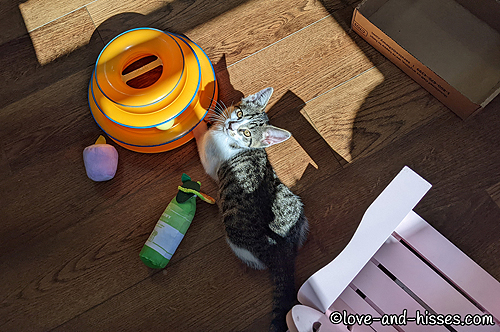 Bramble’s so pretty in the sun. 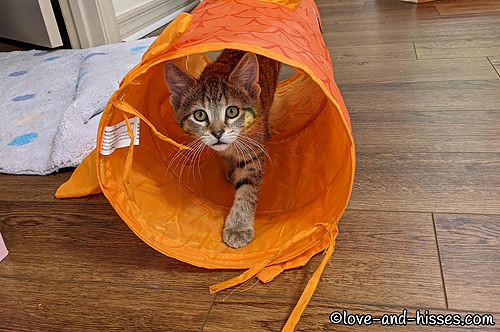 Clover coming through the fishy tunnel. (That patch of color on his left cheek is from one of the suncatchers I have hanging in the window.) 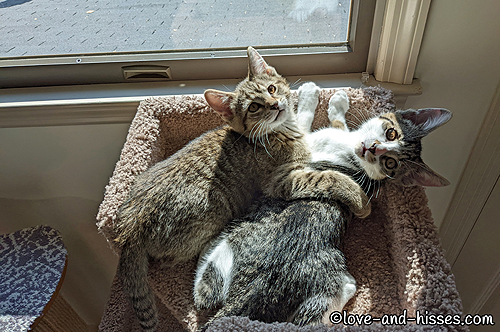 Clover and Bramble have a snuggle. 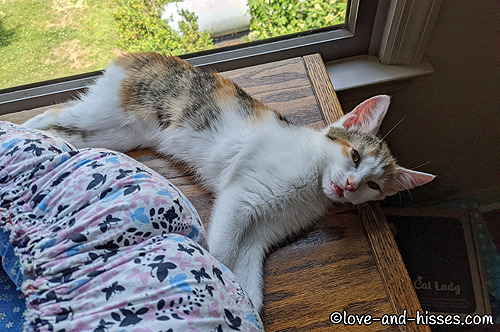 Hollyhock was sound asleep but woke up long enough to register a complaint. 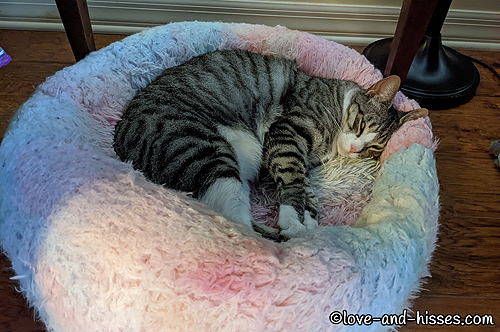 Charlie just adores that bed. And the pink goes so nicely with his nose! 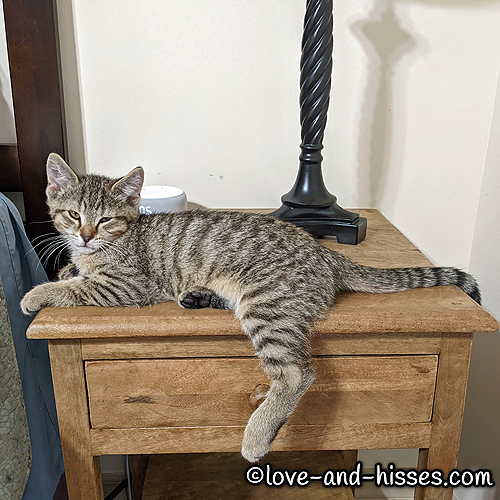 Comfy are we, Clover? (That foot is huuuuge.) 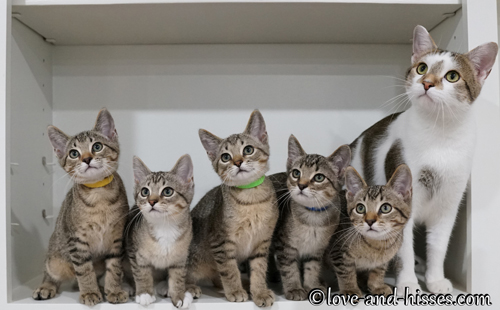 Throw Back Thursday: From 2019 – Charles and his kittens. Left to right: Albert, Laura, Almanzo, Mary, Willie, Charles. (Ma Caroline wanted nothing to do with this nonsense.) 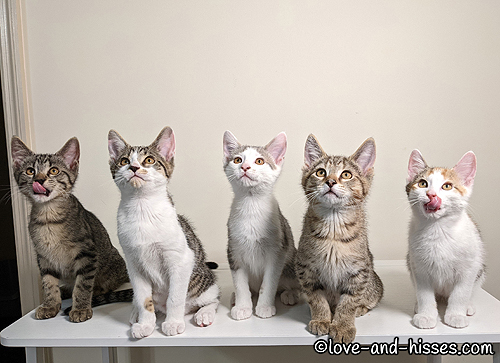 Happy Thlurrrpsday! Mondo (far left) and Hollyhock (far right) get their thlurrrp on while Bramble, Kudzu and Clover wait for another taste of Churu.

YouTube link
The kittens had a visit with Uncle Charlie. The consensus? Hollyhock and Clover DEFINITELY want to be friends with Charlie. Kudzu, Mondo and Bramble are thinking about it and will have their people call your people when they’ve decided. 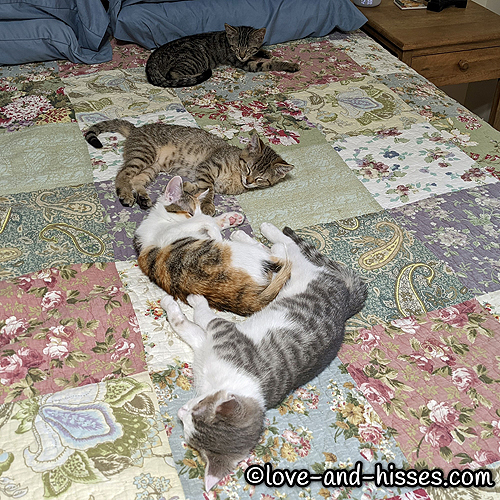