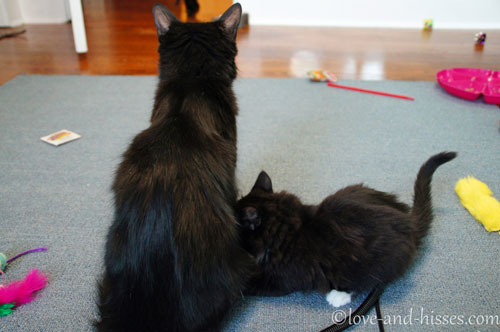 Poor Kate. She can hardly rest for a moment without this happening. 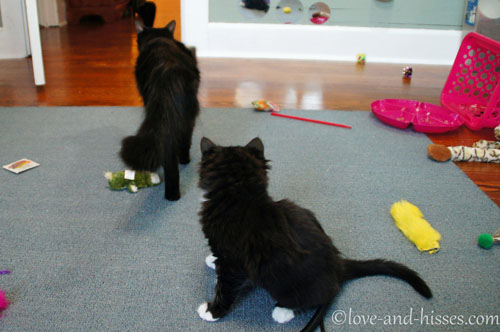 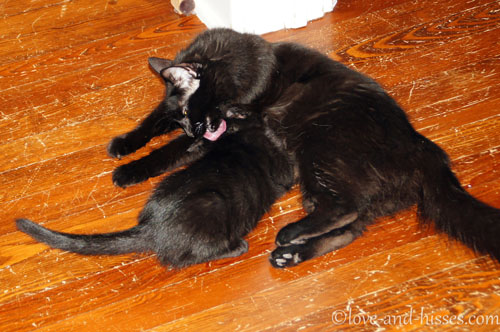 She doesn’t seem to mind it too much – she lets them nurse for a moment, then she gets up and walks off. 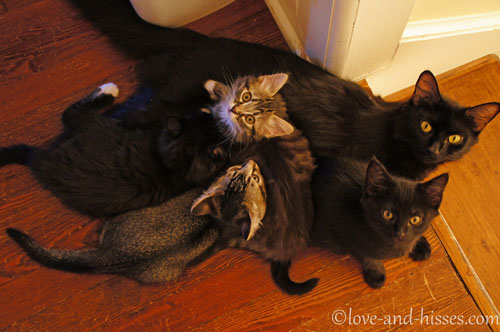 Wherever she is, you can bet there’s at least one kitten thinking about making a move to belly up to the milk bar. 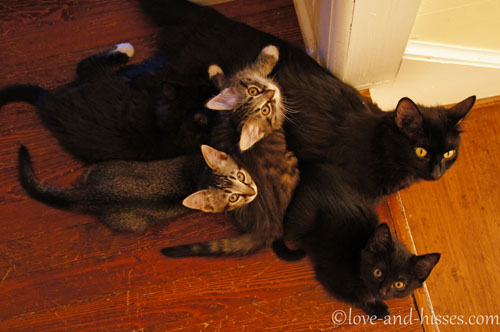 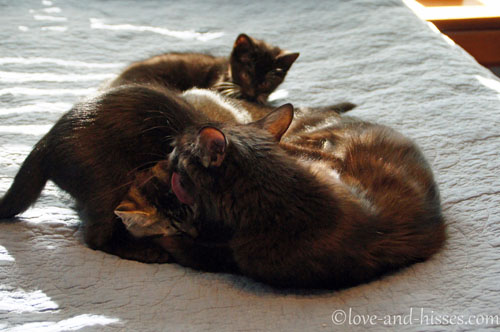 Wherever she is, they manage to FIND her. 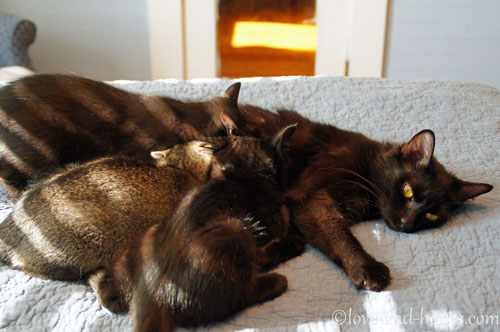 “One moment alone. Is that so much to ask for?” 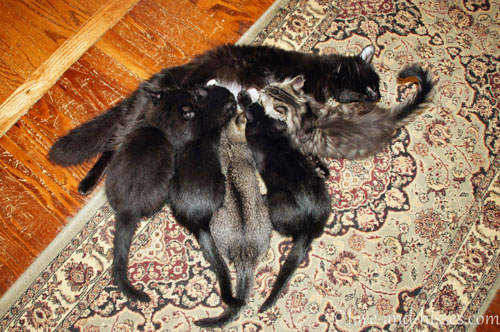 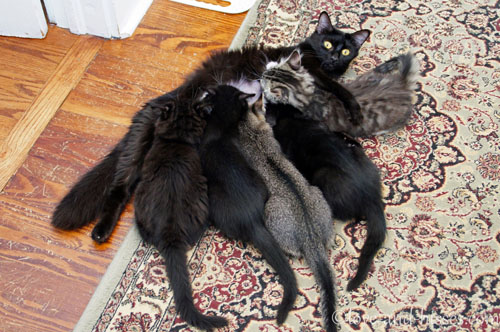 “But… they’re my BABIES. I’m not going to have any more of them, I might as well let them get away with this for a while longer!” 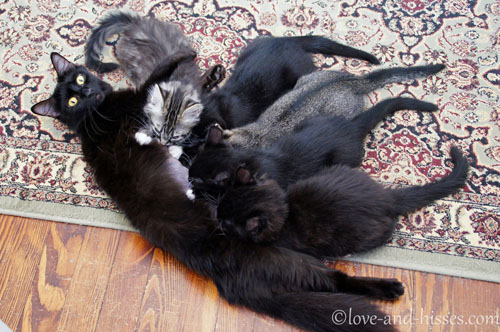 “And who asked YOU anyway, lady?”

Kate and the kittens are spending about 95% of their day downstairs now. That’s due in no small part to the fact that Kate prefers to be downstairs near the kitchen at all times. They follow her downstairs and then spread out through the downstairs. All five of the kittens were on the cat tree in my room for most of the morning yesterday. It’s nice to have them downstairs with me so that I can pick them up and snuggle and kiss them whenever I want. One of them is always within reach!

Kate is eating like crazy – she’s taken to jumping up on the kitchen counter and foraging for food (RIP, bag of hamburger buns), so I’m basically shoving food at her every time I see her near the kitchen. She’s eating a lot, but I wish she’d stop letting the babies nurse as much as they do (even though it’s adorable and I squeal every time I see it. SO CUTE). I suspect that if she cut them off entirely, she’d put on some sorely needed weight.

Other than that, she’s doing great. We have a catnip kicker that we got from Andrea (from her fundraiser last year). I don’t know what kind of stellar catnip is in that thing, but Kate is in L-U-V. She’s always carrying it around, licking it, kicking it, and talking to it. It’s pretty cute (I haven’t gotten any pictures or video yet, but you know I’ll keep trying!) 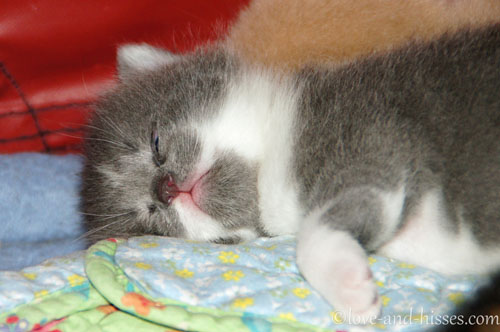 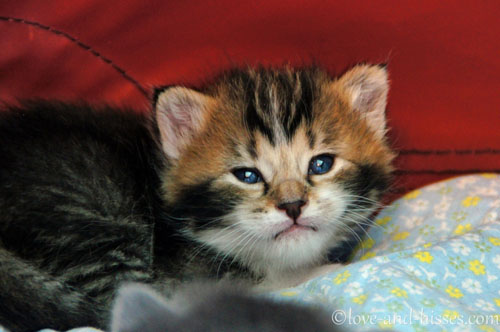 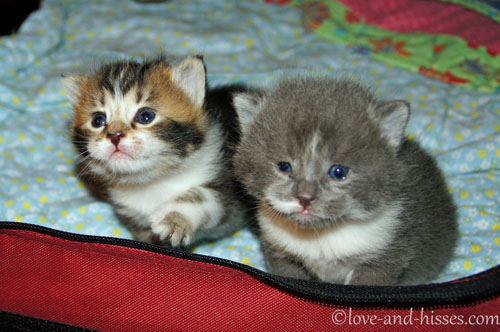 These are actually the last of the crate pictures, because those kittens have ZERO interest in that crate anymore. 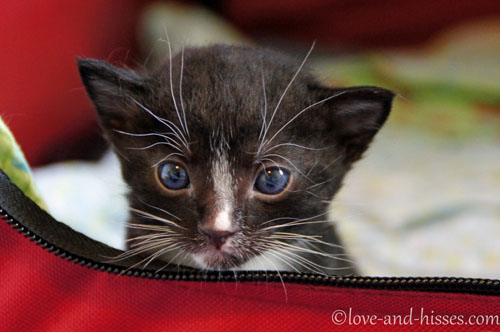 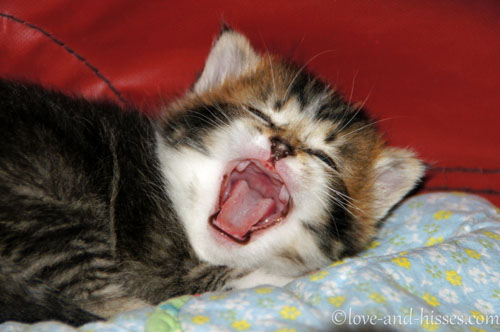 “WE DON’T NEED NO STINKIN’ CRATE!” 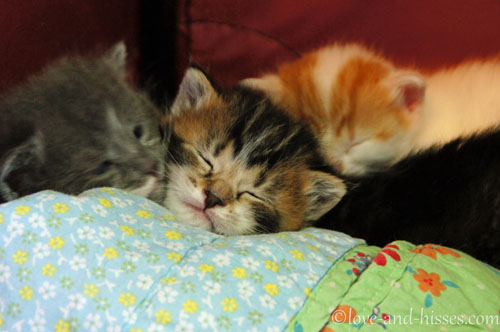 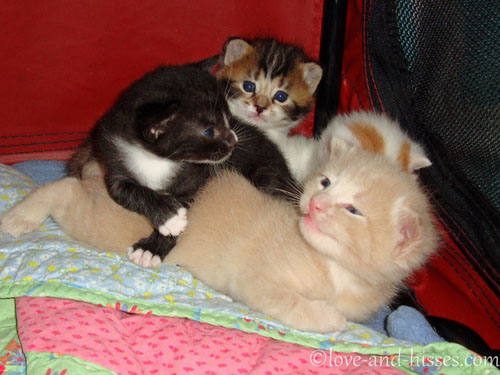 Yesterday, I took the crate out of the foster room and set up a cushy pile of blankets for them to sleep on. They all toddled right off that pile and haven’t been near it since – they want to sleep by the door, and THAT is where they shall sleep, by god. I put a bed there, and it’s big enough that Khaleesi and all the babies fit in it comfortably. It’s nice to be able to open the door and peek down at them to see if they’re awake without having to actually enter the room. 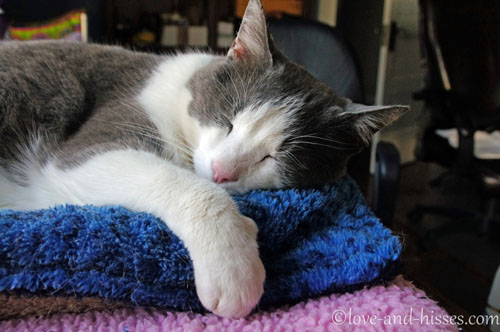 Snoozin’ Joe Bob. Is that a happy boy, or what?