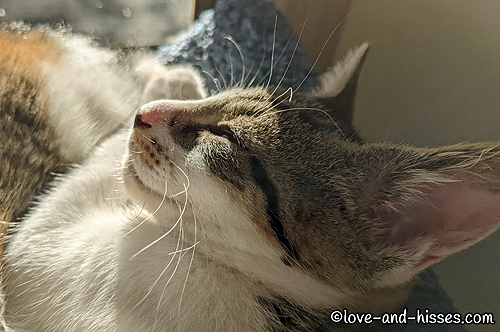 Bramble in the sun. That boy has SERIOUSLY big ears. 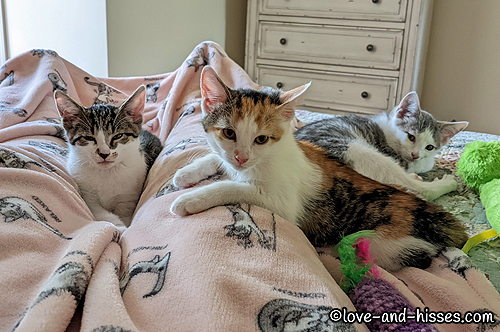 A vital part of training here at the Love & Hisses Kitten Academy is teaching them to be good napping companions. I wouldn’t say they’re quite where they ought to be yet (attacking my foot is 10 points off their final grade!), but they’re getting there. (Bramble, Hollyhock and Kudzu.) 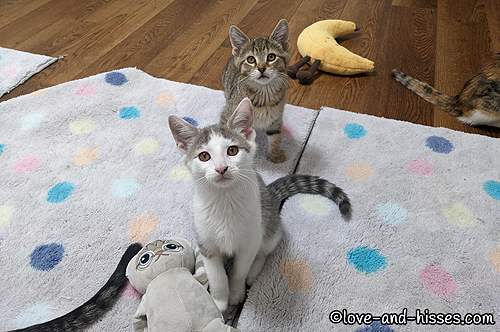 Kudzu’s all “Lady, you maybe has Churu for us right now this second?” and Clover is listening closely for the answer. 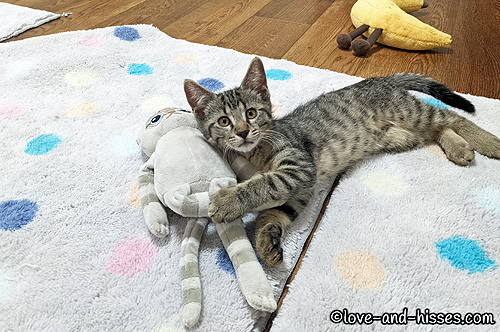 You’re not fooling anyone with that innocent little face, Mondo. 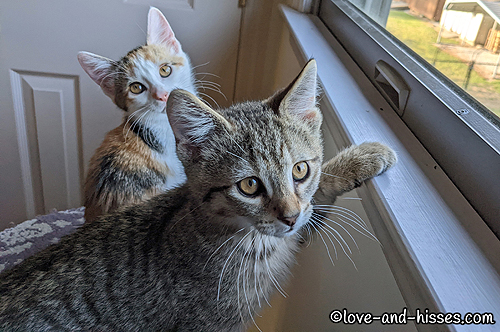 Hollyhock and Clover check out the view. 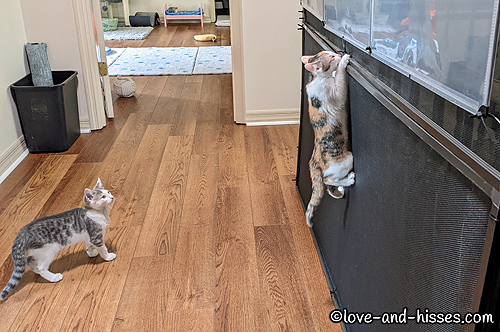 HONESTLY, I do NOT KNOW how it is that kittens EVER make it to adulthood. You see this barrier Fred made to go upstairs so that kittens couldn’t fall through? He created it out of PVC and cat screen. It’s about 6 feet tall. There’s even a door at the top of the stairs. It’s PERFECT.

The first day the kittens were allowed to roam the upstairs, I walked out into the hall to see Hollyhock climbing that screen like it was nothin’. So I put everyone back in the foster room and used zip ties to hang plastic panels (which came from the Tespo Pet Playpen) at the top. My thinking was that the kittens could climb up the screen, but then they’d hit the plastic panels and couldn’t go any higher. There was a TINY bit of screen showing on either side of the plastic, but not enough – I THOUGHT – for the kittens to climb up. Things were fine. FOR A WHILE.

Yesterday I walked out into the hall to see what the kittens were doing and HOLLYHOCK WAS WALKING ACROSS THE TOP OF THE PVC. Reminder: we’re on the second floor, the top of the PVC frame is 6 feet high. Kittens are made of rubber and marshmallow fluff, but there’s no way on earth she would have escaped uninjured from a fall that high. I nearly had a heart attack, but luckily managed to grab her. I put the kittens in the foster room and spent half an hour zip-tying pieces of cardboard over the places where the screen was showing beside the plastic panels. So far it seems to be keeping them from climbing to the top, but seriously. SERIOUSLY. Kittens have a death wish, I swear.

(And thank god for zip ties. And cardboard.) 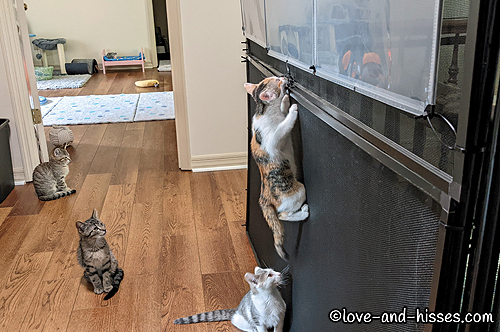 The kittens are 12 weeks old today! In one more week, they’ll be off for their spay/neuter surgeries. (They’ll come back here for a couple of days to recover before they head home.)

If you missed it on social media yesterday, Clover is adoption pending as well, which means that all the Sprouts are spoken for! Clover’s people (who adopted Athos – now Leo – from the Mewsketeers) are going out of town, so Clover will be with us until they get back in mid-June. 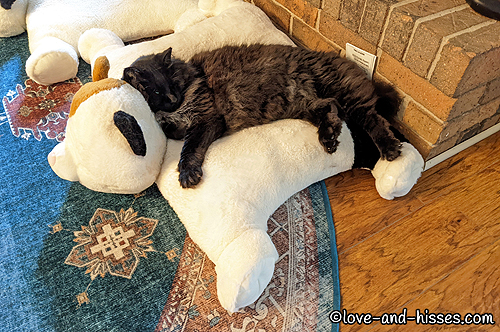 That Khal is one magnificent boy. And he enjoys being comfy. 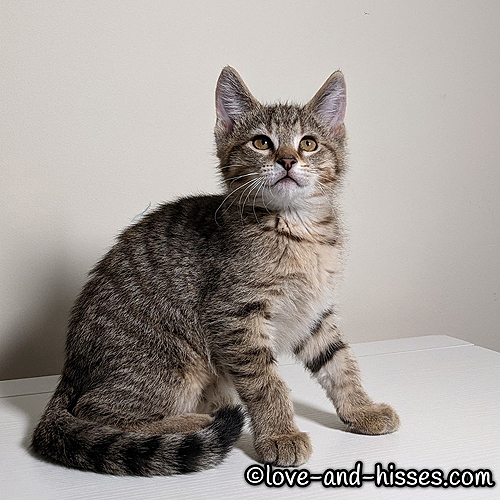 Good news – we are ADOPTION PENDING on Clover! He will be going locally, joining a former foster: Leo (formerly Athos) from the Mewsketeers litter, from 2020. (This is the same litter Uncle Charlie (formerly Aramis) came from.)⁠
⁠
This means that all kittens are now adoption pending! They are scheduled for their spay/neuter surgeries next Wednesday, and will start heading home a few days later. (Clover will actually be with us a bit longer – his people are going out of town, so he’ll stay with us ’til about mid-June.) 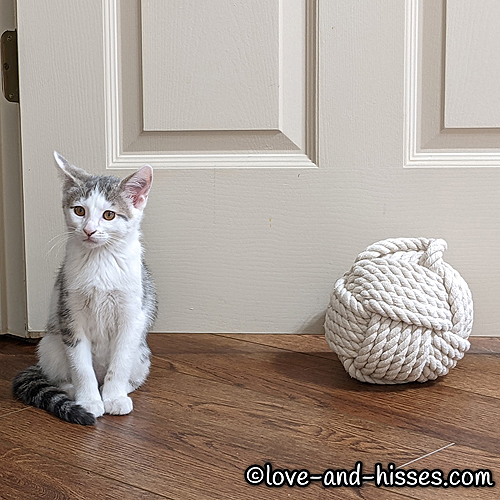 Kudzu finds that doorstop very annoying. He tries to move it out of the way so he can “accidentally” knock the door closed, but it’s too heavy. Woe is he.

YouTube link
Mimosa was adopted and went home yesterday. We fostered her for nearly 4 months (January 27 – May 23, 2022) and I took a billion pictures of her during that time. Here’s a selection of them, set to the soundtrack of her purr. 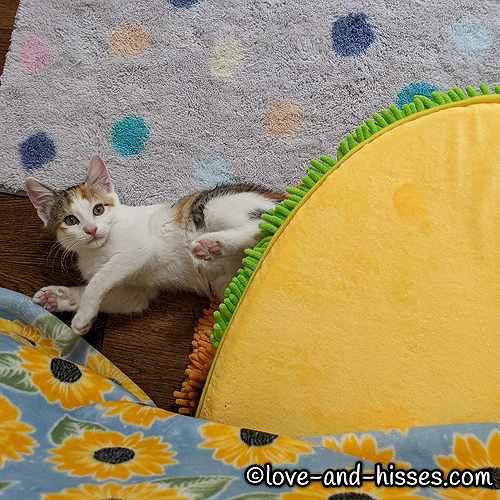 YouTube link
Clover has a complaint. “I think you better keep petting me, lady!”, is what he’s thinking. 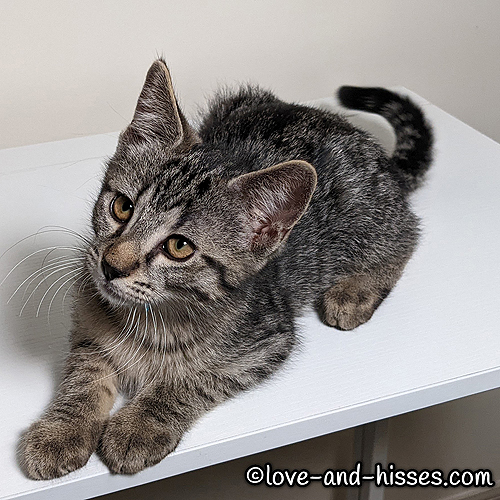 Mondo is one good-looking boy, isn’t he? This whole litter has gorgeous eyes! 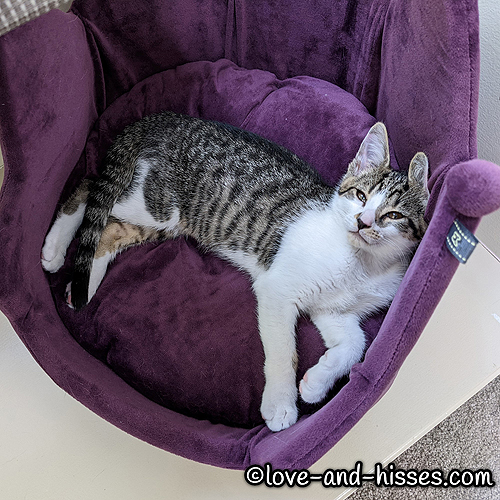