Alexandra came from a high-kill shelter. She had an old head injury – the vet thought it could have been caused by a fan belt – and a sizable dent in her head. She was pregnant when she was turned in, and gave birth soon after to three kittens. Not long after that, she came to Forgotten Felines of Huntsville. She stayed at Michelle’s house for a few weeks before she came here to us. Along with her came…

Add-ins added to the litter were…

Aramis and Winter were (I believe) both pulled from the same high-kill shelter Alexandra came from; they were actually with Alexandra and her kittens at Michelle’s. Planchet came along a few days later; he’d been rescued from where he’d been dumped near the river (post about him at the bottom of the page here).

Siblings (to each other; no relation to any of the other kittens or Alexandra) Constance (girl) and Rochefort (boy) (date of birth: June 16, 2020). I think they belonged to a feral mother who had left them… or moved part of the litter and left them behind. In any case, they were added in with Alexandra’s other kittens.

Also with us very briefly was Anne (below). She and her litter had been dropped off at a vet’s office. The rest of the kittens in her litter had been adopted out, but lucky for Anne another Forgotten Felines foster mom spotted her and knew she needed help. Anne was absolutely skin and bones (less than half the weight she should have been at 8 weeks old). Unfortunately she’d gone without for too long, and she passed away. Post introducing Anne is here, and the post about her passing is here. So in short, the Mewsketeers – Alexandra, Athos, d’Artagnan, Porthos, Winter, Aramis, Constance and Rochefort (they’re named after characters from the book The Three Musketeers by Alexandre Dumas) came to us on July 15th. Anne came to us on the 16th. Anne passed away on the 18th. Planchet joined us on the 19th. Alexandra went back to Michelle’s house on the 20th because she had stopped eating and was congested. She stayed at Michelle’s for 5 days and came back on the 24th, sounding better and eating just fine. On the 25th, she started dragging kittens out of the litter boxes for reasons we were unable to ascertain, and on the 26th she went back to Michelle’s to stay (post about that here.) As of this writing (July 29, 2020), all the kittens are healthy, eating on their own, and gaining weight. Alexandra will remain at Michelle’s until she can be spayed and will be available for adoption. It’s been a crazy few weeks, to say the least. I made a cheat sheet to chart out the names, dates of birth, and relationships. You can read about the Mewsketeers beginning here. There are links at the top and bottom of each entry; click on the one on the right to take you to the next entry.

Planchet was adopted on September 1st! He joins a big brother named Bushwhacker (a former FF kitty fostered by another foster mom) who needs a friend to play with, and a big sister named Gemini! He has been renamed Jupiter.

Winter was adopted and went home on September 5th!

Constance and Rochefort were adopted (together!) and went home on October 3rd! Constance is now Oleander and Rochefort is Rhus. They have a Facebook page, and you can follow them here.

Athos was adopted and went home on October 13th! He is now Leo.

Aramis was adopted and went (stayed) home on September 30th! We made him a permanent resident, and his name is now Charles, Prince of Wails. You can read more about it here. (He will get a permanent resident page of his own when I get around to making one.)

Alexandra was adopted on November 28th! She joins a home with an older kitty companion, and children to love.

You can see all the pictures taken of the Mewsketeers here at Flickr, or scroll through them below. 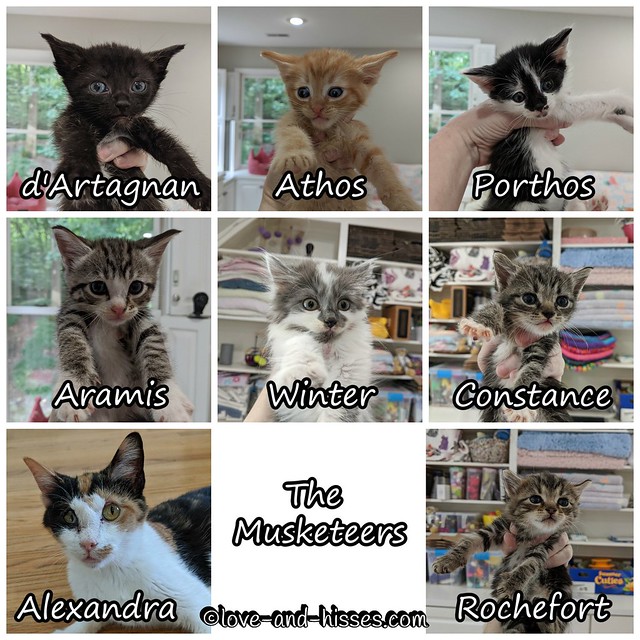