I see all 7 of them, followed by all the cats (and dogs) we’ve lost. Does anyone else not see all 7 permanent residents on that page?

OMG – Stompers!!!! I remember when you got him, still use my “Inspector Stompers Not Judging You” mug, and he remains my all-time favorite. Pretty tough to do considering all the amazing kittens you’ve raised!

Just in case anyone has a burning need for Stompers merchandise, you can find tote bags, mouse pads, water bottle, and of course mugs in many colors and sizes over at Zazzle. (You can see the Love & Hisses Zazzle store here, though those calendars will be going away in the next week or so… or by the end of the month. Or this summer. Or basically whenever I get around to it.)

Stompers still has the Big Eyed Face like this. Random fact, when we moved into this neighborhood, the artist, Margaret Keane, lived across the street with her daughter. They were having a garage sale the weekend we moved in and moved out shortly after.

Inquiring minds wanna know: was there anything good at the garage sale?

He’s especially cute here wherein Stompers heads for some snuggling, demonstrates his “You must kiss me” look, and shows you who boss is.

That boy was just the CUTEST. And I love the way the other kittens, who were a bit older than him, were SO sweet and tolerant with him.

Robyn, how long do the kittens stay with you?

They’re with me ’til they’re spayed/neutered. Some rescues do it at 8 weeks/ 2 pounds, but Forgotten Felines of Huntsville waits until they’re 3 months old. Sometimes they’re with me a bit longer if they’re adoption pending and the adopters can’t come until a certain date (and I never complain about that!)

I’m curious, where does Mimosa sleep? It doesn’t look like she curls up with the kittens.

Usually wherever the kittens aren’t – if they’re on the big cat tree, she flops down in the middle of the floor or in the window hammock. If they’re on the floor (or one of the smaller trees), she likes to snooze in the top of the cat tree. I don’t remember ever seeing her really snuggle up with them, though from time to time a kitten will curl up with her. (When that happens, she stays for a while, and then gets up and moves elsewhere.)

Is that an Egg plushie with Bramble? 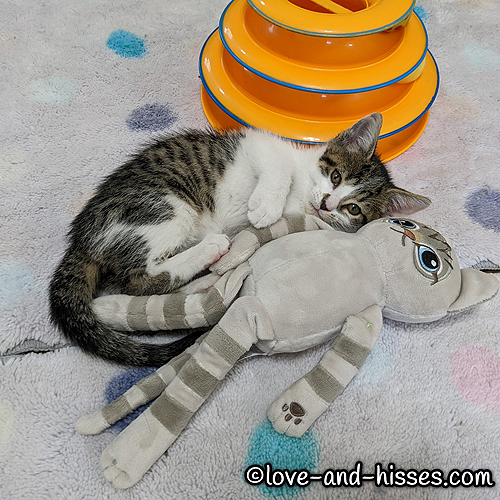 Wow, Khal has come so far from his fearful days at Crooked Acres, to asking for belly rubs. Took him a while to figure out he hit the jackpot with you and Fred.

It is amazing – when I think of how long it took me to even touch him, it blows me away that I could walk over to him and bury my face in his belly fur, and he’d just purr and whine at me to pet him. 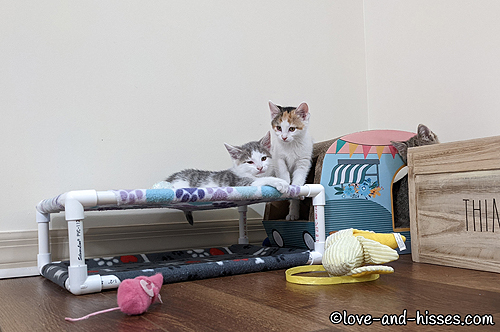 Kudzu’s all “Lady, you wasn’t invited to this meeting. Please excuse yourself.” 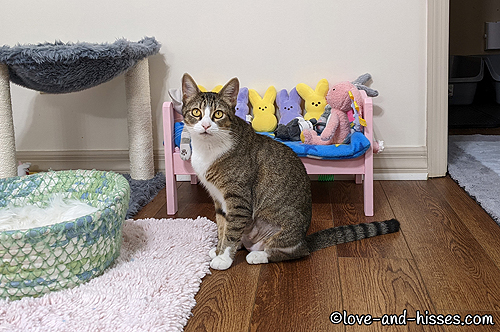 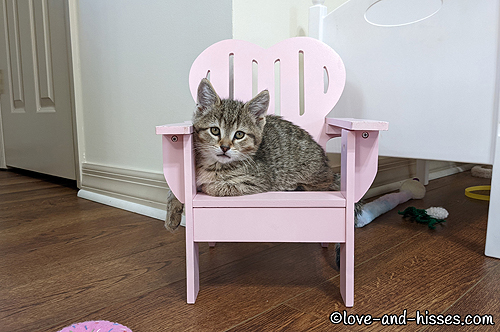 Clover really fills up the pink Adirondack chair these days. 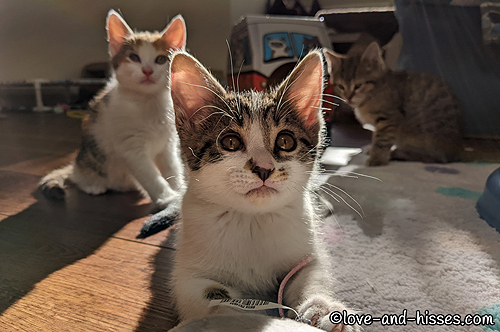 Bramble in the sun, lookin’ pretty. And Hollyhock and Clover in the background, looking annoyed. 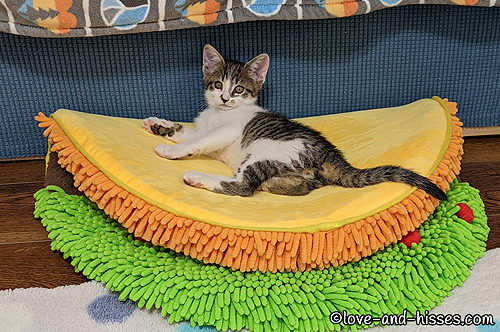 I love how popular the taco bed has become since I folded it in half! 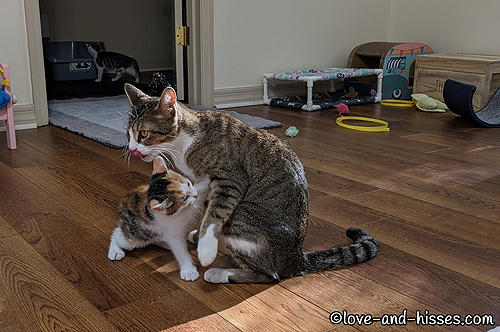 Hollyhock gets a bath. 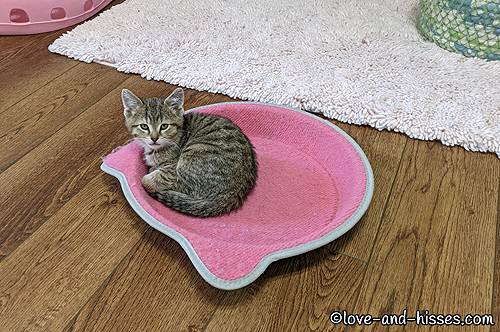 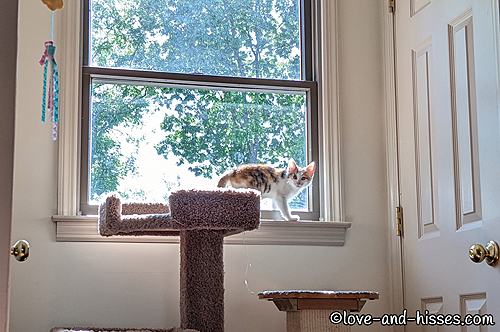 Hollyhock certainly loves to walk on the windowsill. 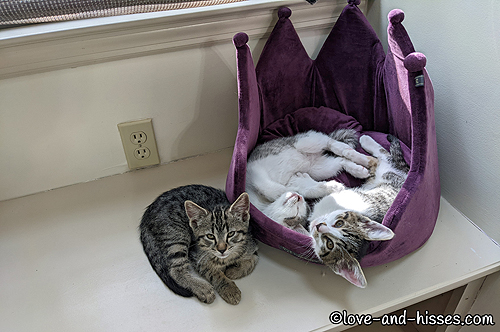 Sleepy Mondo, Kudzu and Bramble. (All 3 of them were in the bed, but of course when I went to grab my phone to take a picture and came back, Mondo had left the bed.) 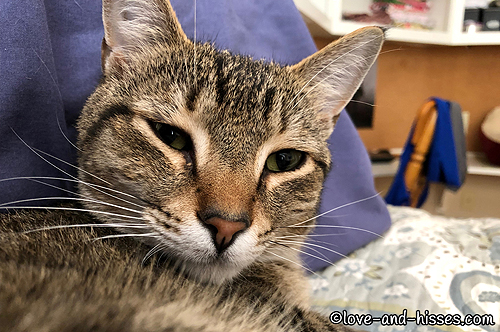 Just a picture to remind you that Dewey is a pretty, pretty boy even if he won’t let me take his picture. 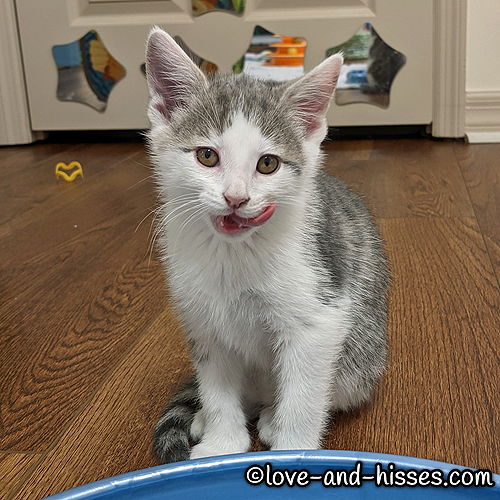 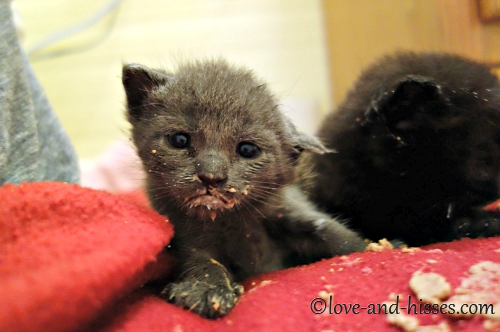 Throw Back Thursday: Back in 2015 we had a litter of bottle babies we named after swimmers (because they were rescued from a puddle in a storm!) This picture of gray kitten Spitz was taken the first time I tried introducing them to canned food. (Fortunately Spitz’s eating skills improved!) His serious little face kills me.

YouTube link
When I posted the update pictures of Bert Macklin and Art Vandelay the other day, someone reminded me of this video, and I went and found it and re-watched it about 7 times in a row. It’s called “Bert Macklin’s first day with the new legs” and it always makes me laugh. 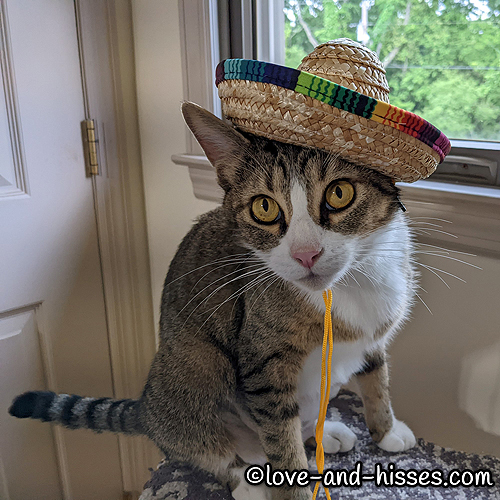 Mimosa wore this sombrero for exactly 5 seconds, and I was thrilled I managed to get this shot of her! (She flipped it off her head right after I took this picture and would not be bribed to let me put it on her head again.)

YouTube link
Throw Back Thursday: here’s a hat tip to 2017’s foster Chip, son of Belle. He was the BAYbee-est BAYbee who ever BAYbee’d. (Also gray tabby boy Gaston, who also had a lot to say. Chip and Gaston were adopted together; I’ve never gotten an update on them – I would love one, if their people are out there! – but I bet those two still have a lot to say!) 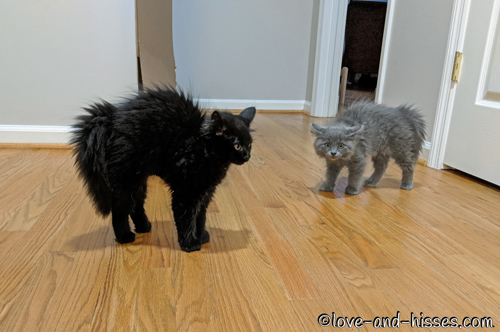 Throw Back Thursday: another Floof Suit pic (these never get old.) This one is from 2020 when floofy black kitten Carmelita and floofy gray kitten Pablo (from the Mewchachos litter) caught sight of Uncle Archie for the first time! 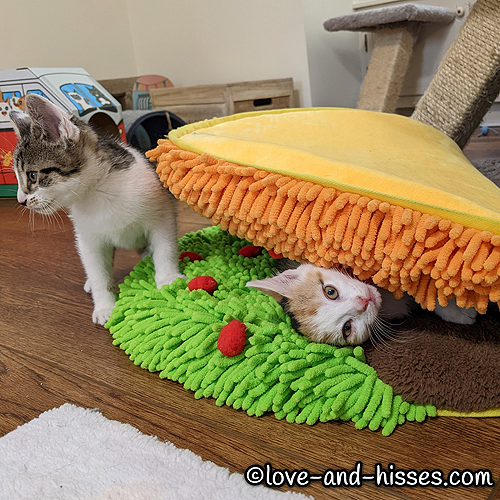 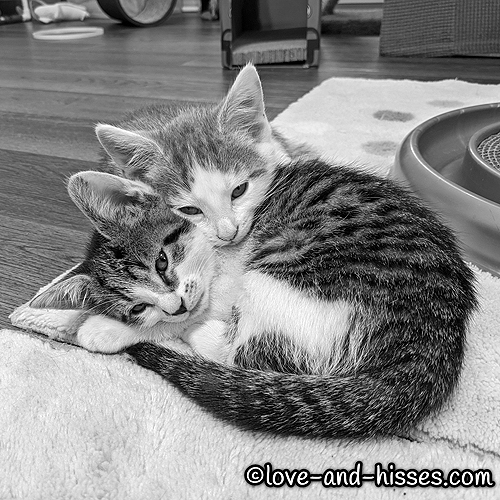