I got an update from Lynn, who adopted those sweet ‘Maters boys, Mr. Stripey (aka Stripey) and Sungold (aka Sunny.)

Robyn, I just sent you a disk with new photos of the boys. These are much better. Thought you might like an update. All is well here. And they are inseparable. One of them sniffed Tabby and she tolerated it for awhile and then slugged him. The other one leaped out in surprise onto Tiki and she let him know that was not appreciated. Both boys just sat and shook their heads, like WTF? 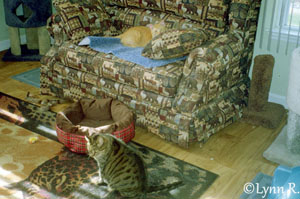 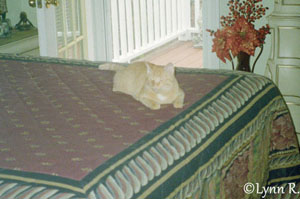 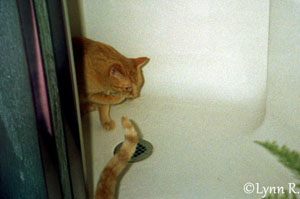 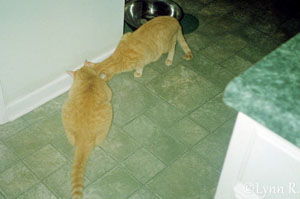 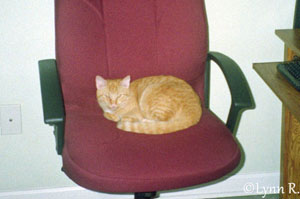 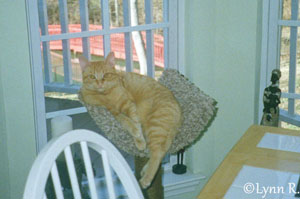 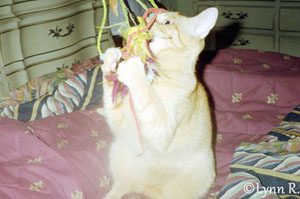 Aren’t they the sweetest things? I just love updates on my former fosters, perhaps I’ve mentioned? 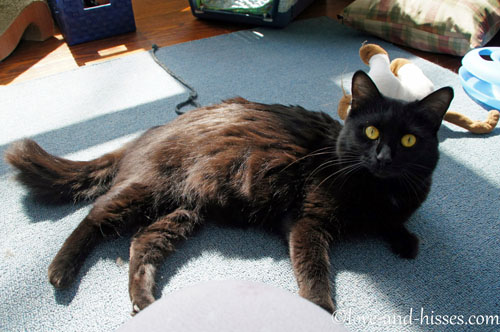 That’s right, still bakin’. I finally got out the Furminator brush yesterday, and I can tell you that Kate loves herself a good brushing. She kept walking back and forth, purring, kneading, and head-bumping me while I brushed her. I got an impressive little pile, but she’s still shedding like crazy. It’s about that time of year when the cats start shedding anyway, and with her medium to long fur, it seems like even more than it is. The foster room probably needs to be vacuumed every single day, but I’ve been sticking with doing it every second or third day. 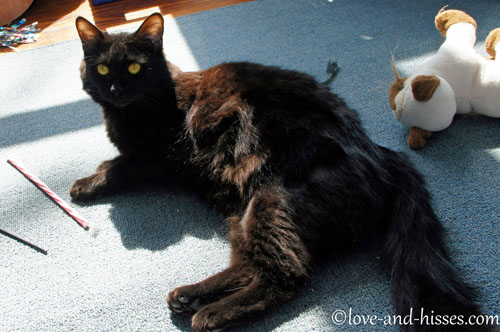 According to the spreadsheet, the majority of the guesses are for this week – the most guesses being on Thursday – so we shall see. I can report that she’s eating really well, and if I recall correctly, Maggie and Emmy’s appetites dropped off in the last couple of days before they had their babies, so you know I’ll be keeping an eye on that. 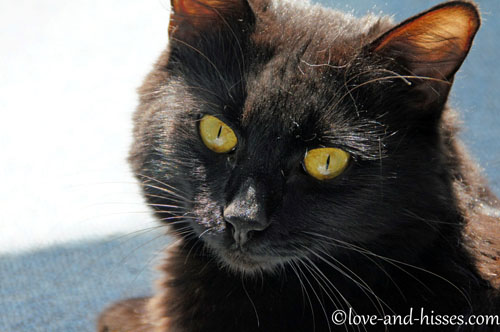 “And I’ll be keeping an eye on your hand. Which is not petting me. What are you waiting for?” 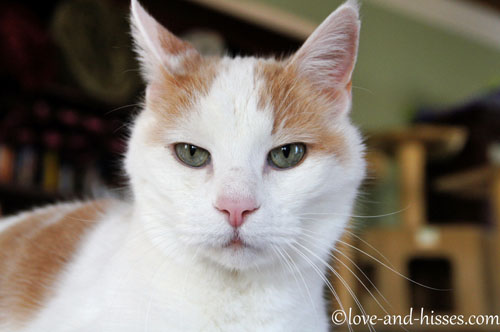 Old man Spanky keeps on rollin’. (Pic taken about a month ago.)

Two weeks ago, we got Liqui-Tinic from our vet. (Edited to add: It might be cheaper here. Do a little looking around on Google before you up and buy any online!) The vet referred to it as “a blood builder.” Spanky had pretty much stopped eating anything at all, was doing nothing but sleeping all the time, and had that look in his eyes. (If you’ve had to say goodbye to a beloved cat, I think you probably know the look I mean. If you haven’t, you’ll know it when you see it.)

Fred started giving Spanky Liqui-Tinic several times a day, and within two days, Spanky’s appetite was back, he was asking for food several times a day, and he was bright-eyed and aware of the world around him. He was going outside and walking around the back yard – which he hadn’t been doing – and he was meeting Fred at the top of the stairs every morning. The Liqui-Tinic has been a miracle worker for us these past two weeks. I know it won’t work forever, Spanky’s appetite is beginning to drop off again, but it’s given us some more time with Spanky and has made Spanky feel really good. That’s what we were hoping for.

I know that the time we have left with Spanky is likely measured in months, if not weeks. We have decided that the time we do have left with him isn’t going to be spent carrying him back and forth to the vet. He is terrified of trips to the vet to the point of losing control of his bladder, and just as scared when vets come to the house and try to examine him. He’s an old man and he deserves to live out his days peacefully.

Hey, this is a bit of a downer ending to this post, isn’t it?

ANYway, I wanted to suggest that if you have an ailing old man kitty or even an ailing not-so-old kitty, you might want to ask your vet about Liqui-Tinic. Fred had mentioned it on Facebook back when it started making a difference in Spanky, and Jacquie talked to her vet (who had never heard of it), and started giving it to her 18 year-old cat, with her vet’s blessing. It’s working for them, too, and it’s got really good reviews on Amazon.