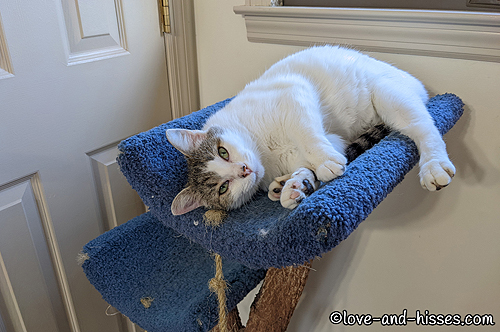 She loved that cat tree. But she insisted upon flinging herself from the top level to the floor, and it was making me cringe (we don’t want scrambled kittens), so I replaced it with one she finds acceptable. 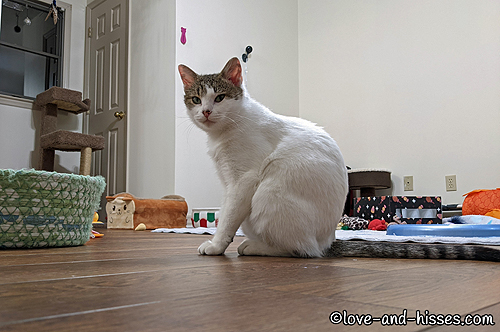 That cat tree in the background – my thinking was that she could snooze on the top level and then walk down the levels and hop onto the floor from the lowest level. She doesn’t do that, OF COURSE. She goes to the middle level and jumps down from there. 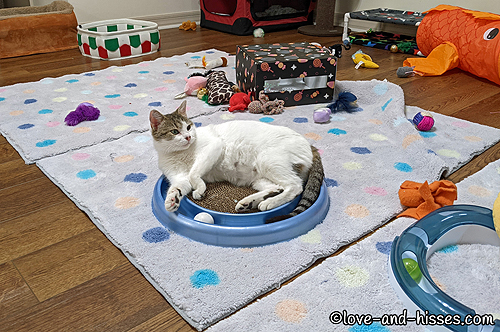 Ivy’s gonna do what Ivy wants to do, apparently.

I’ve been so focused on hoping that Ivy waits until I get back from my trip in January to have her kittens (if, in fact, she IS pregnant, and I am only 75% convinced that she is, so that I can point to that 25% of uncertainty and say “See? I wasn’t entirely sure she was pregnant!” if she turns out to be a faker, because I prefer to hedge my bets) that I haven’t reported that I have seen no belly movement yet. And believe me: I’ve been looking at that belly! Her appetite comes and goes (which I’ve certainly seen before), but she’s definitely getting bigger. Fred is sure she is pregnant (“She gained almost a pound in 5 days!” he points out to me. Like, I’m not pregnant and I could gain that much in 5 days without any effort at all. BUT WAIT, you’re saying, because you are a stickler for detail. Could you gain 10% of your body weight in 5 days, though? And I’m here to tell you that it would take a lot of effort on my part… but okay, yeah, I probably couldn’t. Point taken. Pass the cookies anyway.)

In honor of the post “Newt Fumes” from 2016, wherein Khal (who we were calling Fancypants back then) climbed the fence into the back yard and then made himself at home while Newt fumed at his NERVE, here’s Khal hanging out with the other permanent residents these days. 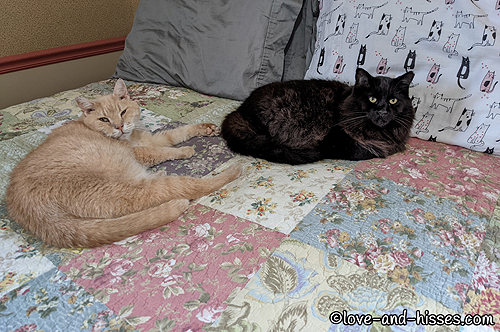 Newt and Khal spend a lot of time on Fred’s bed together. They don’t actually cuddle up, but I’ve seen them practically spooning more than once. 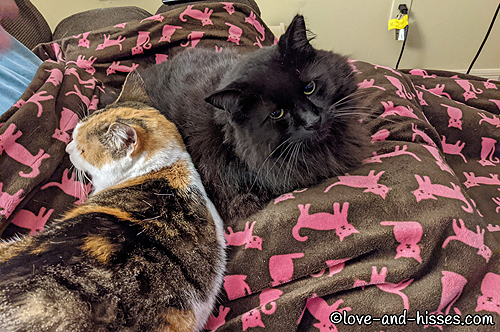 Alice and Khal in Fred’s lap. Khal’s not thrilled about this, but Alice ain’t giving up her spot… OR her Daddy (yo). 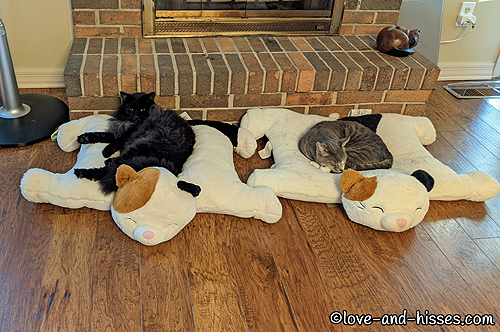 Khal (left) and Archie. Yes, we have two of those beds now. I was at Aldi, they had a bin of “Pillow Chums”, and only one of the “Cam the Cat” ones. So I grabbed it… and I am hoping this is a yearly thing Aldi does, these pillow chums. Because if there had been two, I would totally have grabbed one for the auction! 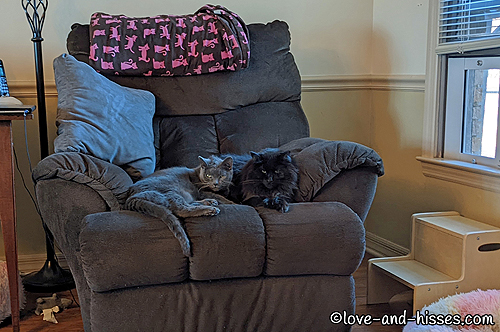 Jake loves everyone – Khal’s the only one who will let him snuggle, though. 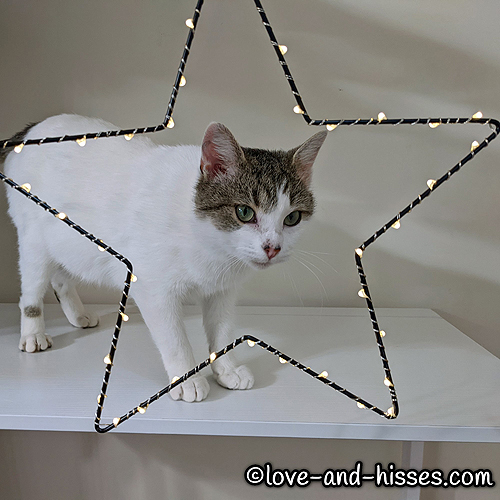 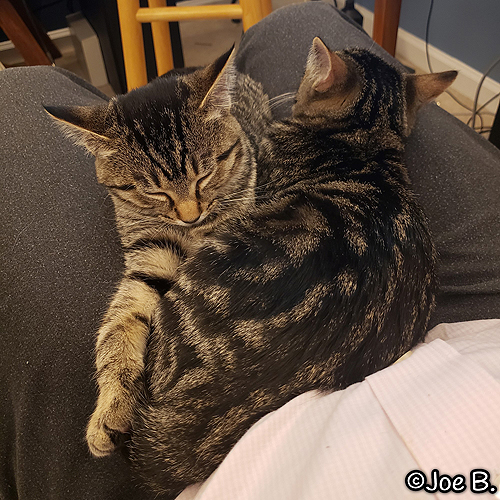 Look, look, we have an update! These are the kittens formerly known as Ruthy Ruthenium (left) and Nikki Nickel!

Ruthy is now Minou (Minnie), and Nikki is now Sylvie. Joe reports: It was day three before they decided they liked pets and scritches more than hiding. And it was tiny Sylvie who would come out for loving first every time. Then Minnie would poke her head out. Minnie knows her name and they both come when called and when they think it’s in their best interests. Sylvie would come out for loving first but Minnie is the first to go into a new room. One is less shy and the other is more adventurous. They fully roam the upstairs and come down to the front room every once in a while. I expect them to be roaming downstairs by this time next week.

[Big kitty sister] Buttons has gone from hating them to only begrudging them. She doesn’t cry out anymore so she is not lonely at least. I think in another week or two she will fully come around.

So all in all they are doing quite well.

YouTube link
I think that cute little nose needs a BOOP, don’t you? 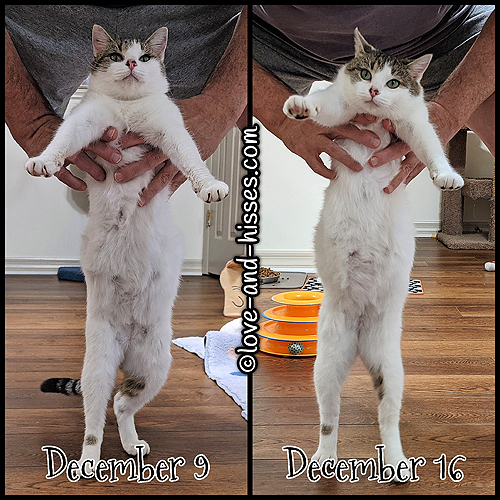 Belly comparison! On the left, the day Ivy joined us (December 9th) and on the right, one week later (December 16th.) She managed to gain almost a pound in her first 5 days here, so it’s understandable that she’s bigger all over, not just in her belly – but the belly’s definitely bigger!

YouTube link
I tried to fight the idea that Ivy was a lot like Canasta because, y’know, she’s her own person, thank you. But when she plays like this, well, I can’t deny the resemblance! What a goofball. 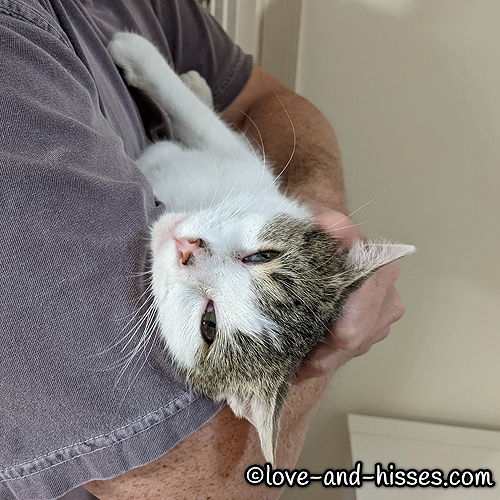