Help needed. You seem to be able to manage multiple cats with out major cat fights. Growing up we always had at least two or three cats and every now and then there was a minor spat (kids will be kids:-) After my two 15 year old kittens passed a year ago we got two rescue kittens from the same litter, a boy and a girl. They were about 12 weeks old when we got them. For a year they got along fantastically. They are both just over a year now and we are starting to have some major behavior issues with the female flat out attacking and not stopping the the male cat. I’m not sure what the ultimate “trigger” is or was, but the poor male cat now is constantly looking over his shoulder and very kitties he because he keeps getting beat up. All of this just started a couple weeks ago. I try separating them, have bought pheromone diffusers. They have cat trees on both levels of the house, litter boxes in multiple rooms and food in multiple rooms. my husband and I are even sleeping on separate levels of the house to keep them apart and nothing seems to be settling her down. Next stop is the vet, though she seems to be her perfect self until she attacks. Any suggestions? We love both of them to death and I’m terrified that she is a “single” kitty kitten. He is just a sweet boy without a mean bone in his body and I know he misses his play buddy. Thanks!
Love reading your post! They are a part of my morning coffee routine!

I’m wondering if playing with her until she’s exhausted would help burn off some of the energy that she’s using on her poor brother. That’s honestly the only thing I can think of – we haven’t had this situation (though we occasionally have to step in and stop the boys from following Alice around). I would definitely get them both to the vet, I’m wondering if there’s something going on with him, health-wise, that she senses and which is setting her off.

I’m hoping that others will chime in here – my mind is blank at the moment, though I’ll come back and add anything that might come to me.

That theme is definitely on my list of potential names! Michelle has an orange tabby named Kravitz at the moment, and that boy is PERFECTLY named. He is the nosiest cat I’ve ever seen in my entire life, and he cruises around just keeping an eye on everything and everyone.

I hope you don’t mind this question: how much time do you spend with your fosters? Is it more time or less as they get older?

I’m a new foster mom and was wondering if I need to spend more time with my kittens. Since I work from home, I take several breaks to feed and clean-up, but I only get to spend solid time bonding in the evening. I want to learn from the best!

I spend more time with them as they get older (when they are tiny, and especially newborns, they are adorable but very boring and don’t need a thing from me). But how much time I spend with them depends on the day and what I have to get done that day. Some days it’s 2 – 3 hours or more; some days I see them in the morning when I feed them and scoop, have a quick check during the day, and spend a while with them in the evening.

To me, it sounds like you’re spending plenty of time with them!

I know Ozzy has swirl markings which I love. Do both Carli & Nicki also have the swirls?

Yes, Carli and Nikki both have the swirl markings too!

YAY for the adoptions! (Secretly waiting for new kitties after the New Year bc I imagine you will take the next two weeks to get Alfie/Christopher and all the others adopted as well).
Also, in reviewing last year’s post, it seems to me you are very into food themes. 🙂

I have to admit that I didn’t name the Vittles, but absolutely approved of their names. I love a good theme!

Correct me if I missed it but with last Xmas litter, and with the Cardsharks, you often did videos describing each one and how the were your favorite. Also included were the ADORABLE alone shots in mugs, glasses, etc with a toy or cute hat/costume. Did I miss all that with Elements and Dippers? It was so wonderfully entertaining and cute! The lengthy explanations of personalities were really good and funny with the dress up pics.

Nope, you didn’t miss it. I haven’t done it recently. 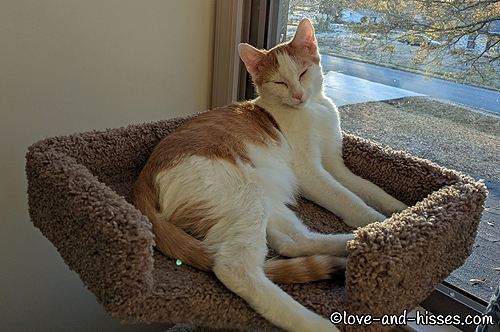 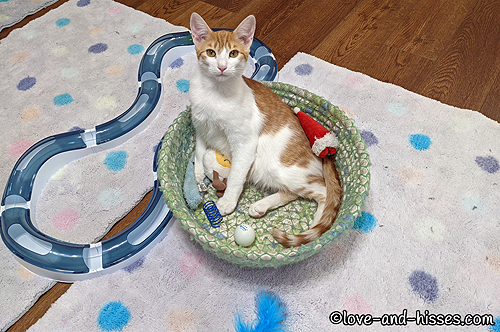 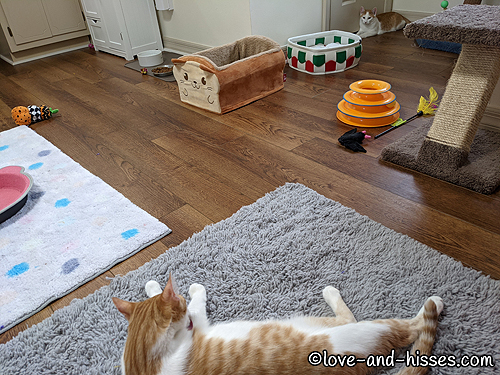 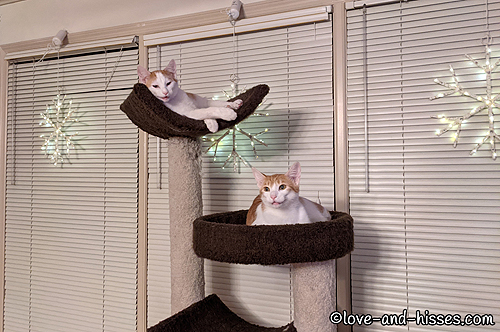 Christopher (top) and Alfie would like me to know that they were NOT just batting at those Christmas decorations. 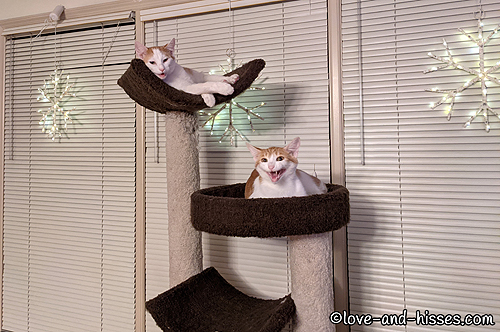 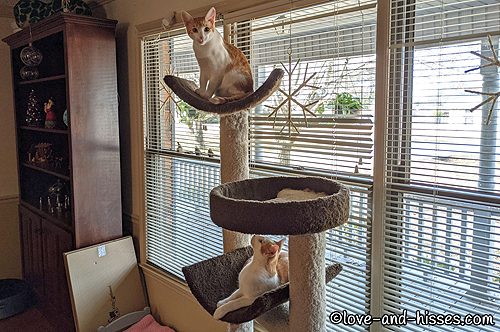 They love that cat tree.

In case you couldn’t tell, Christopher and Alfie have the run of the house now. Since they’re going home tomorrow (!) (yes, together, in case you missed that bit of news!), I figured the permanent residents could handle having them run around the house for a few days. They spend their days on the cat tree, racing around the downstairs, getting hissed at by the permanent residents, and they spend their nights sleeping with me. They are just SUCH snugglebugs, those boys. 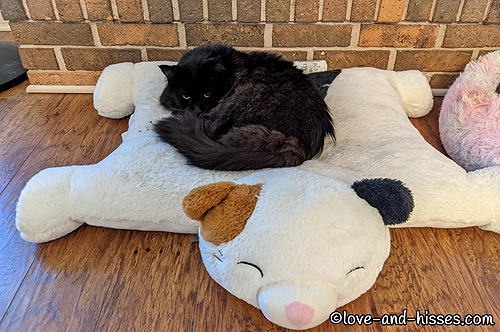 Khal’s been watching Archie and Charlie sleep on this bed for the past year, and decided to finally try it out himself. Pretty comfy! 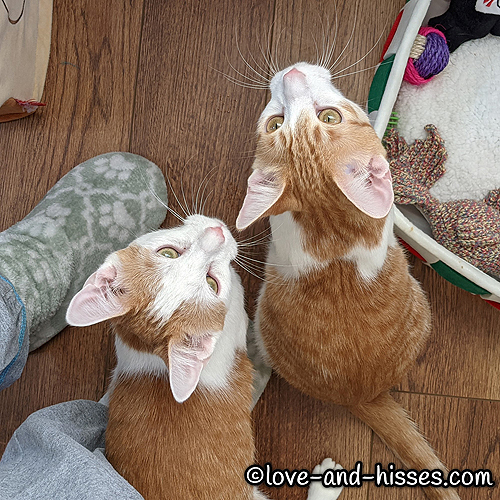 “It’s time for breakfast, lady, and WE IS STARVIN’.” 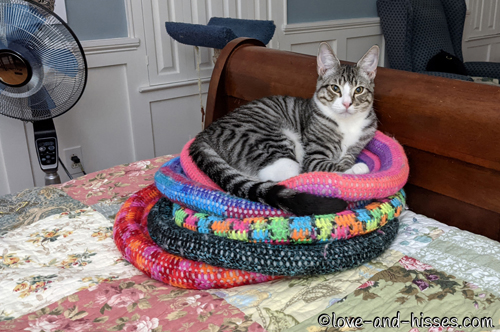 Charlie – this picture is from a year ago – would like you to know that YOU, TOO could have an awesome stack of beds just like this! Andrea’s online auction to benefit Winnie’s Wishes is ending on Saturday – and she’s got lots of these cool crocheted beds AND some of the poofy beds we love so much, as well as some crocheted toys – a lot of cool stuff, we’re saying! Check everything out at https://winnieswishauction.blogspot.com/!

YouTube link
With Alfie sleeping, Christopher entertains himself. (This was from a couple of days ago, before Ozzy, Carli and Barry went home, so you’ll see a bit of Ozzy.) 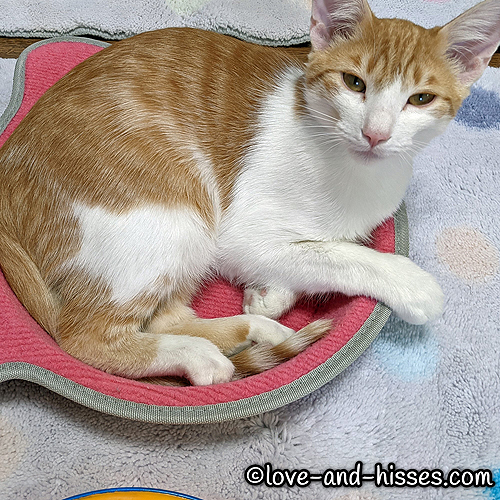