In case you missed it on social media yesterday, there was an adoption. Barry, Carli AND Ozzy were adopted – together! They are going to be so spoiled and so loved in their new home (and they have a little girl to play with!)

This means that all of the Elements kittens were adopted from here – which is how it SHOULD be, if you ask me. Mama Maddy Magnesium is still available, of course, though hopefully she’ll get adopted straight from Michelle’s. Fingers crossed!

All of the pictures in today’s post include the rest of my pictures of Barry, Carli and Ozzy. 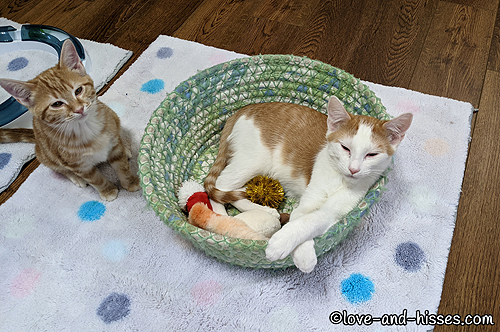 Ozzy waits his turn in the basket… Christopher doesn’t look inclined to vacate it any time soon, though. 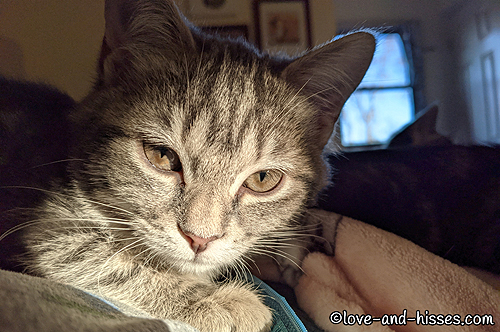 Carli in the sun. 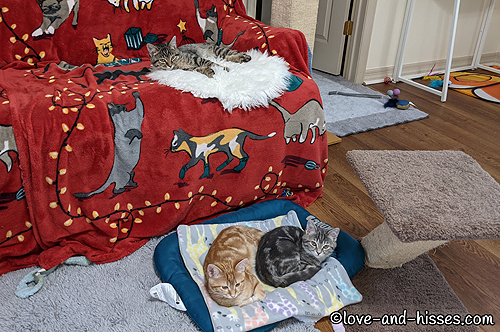 Barry on his favorite floofy bed (which went home with them), and Carli and Ozzy on the floor. 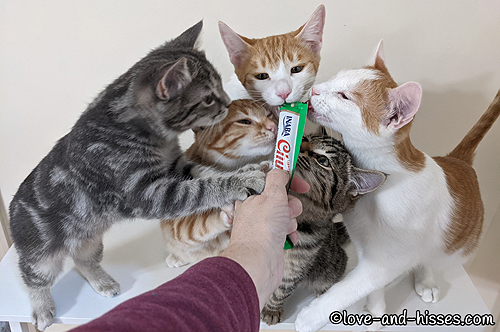 One last Churu before they left. 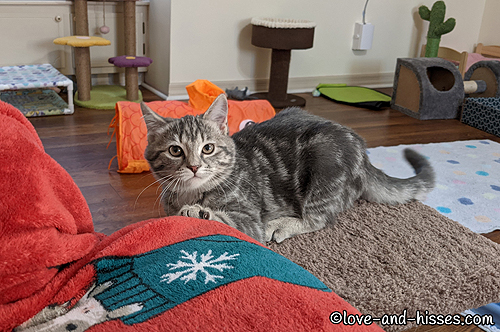 One last suspicious look from Carli. 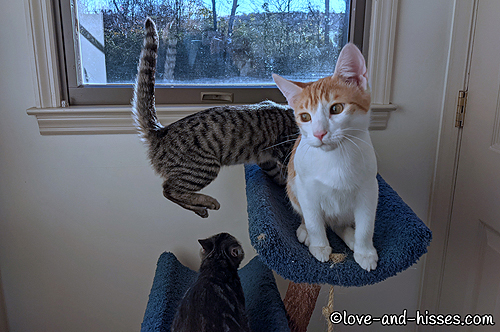 I love the side eye from Alfie… and Barry in mid-leap! 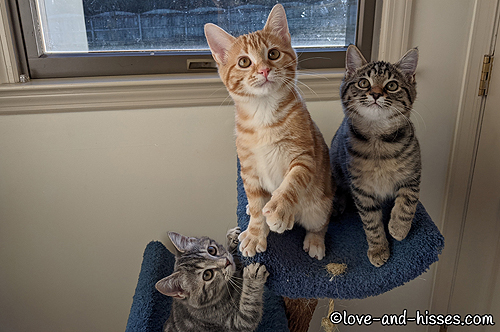 The lucky trio (they have a cool cat tree in their new home, too!) 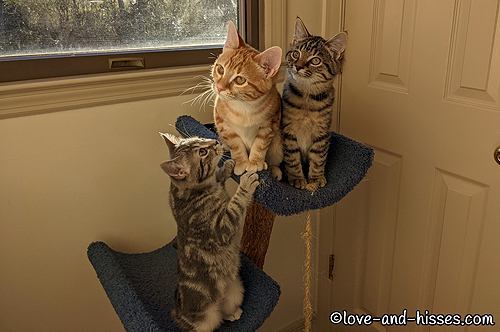 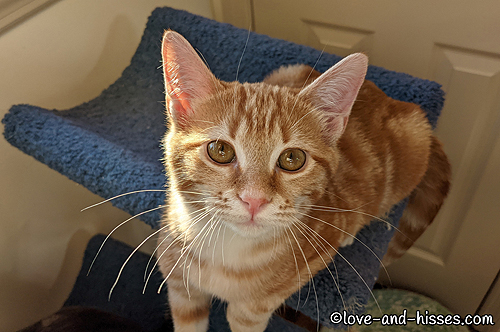 Ozzy and those fabulous whiskers. 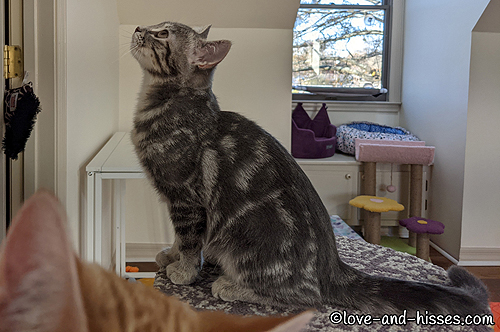 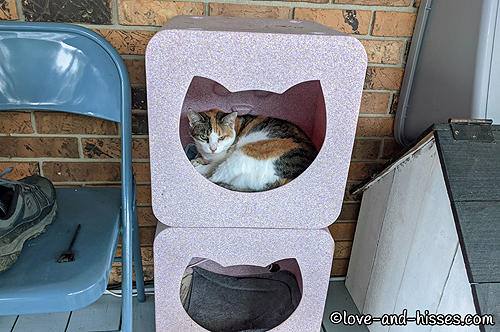 Both of those cubbies have heated beds in them; Alice prefers the top level. The better to keep an eye on her pesky brothers, of course.

YouTube link
The kittens have eaten breakfast, so now it’s time to burn off that energy. Zoom zoom zoom! 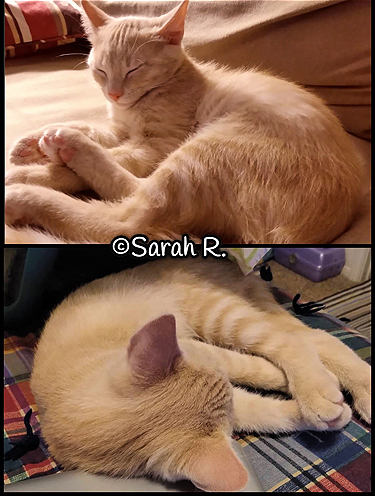 It’s a Sammy update! Sarah reports that he’s doing well – he sleeps hard and he plays hard. Big sister Mouse is still sorting out her feelings about the new interloper, but I have faith they’ll be friends before too long. Who can resist that charming boy? (Thanks, Sarah!)

YouTube link
Nikki (classic brown tabby, purple collar) and her sister Ruthy (brown tabby, pink collar) were adopted – together! – on Sunday. They join a family that includes big kitty sister Buttons, who desperately needed some friends. Here’s the video where you can see them grow while we fostered them from October 4 to December 5, 2021. 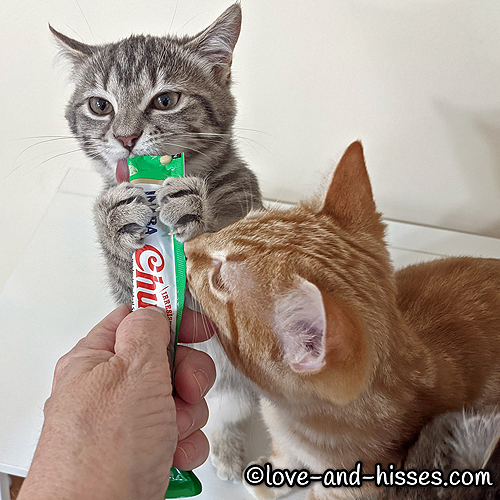 Have I mentioned that they’re fans of the Churu?

YouTube link
Ozzy’s fresh biscuits, made to order. Get ’em while they’re hot! 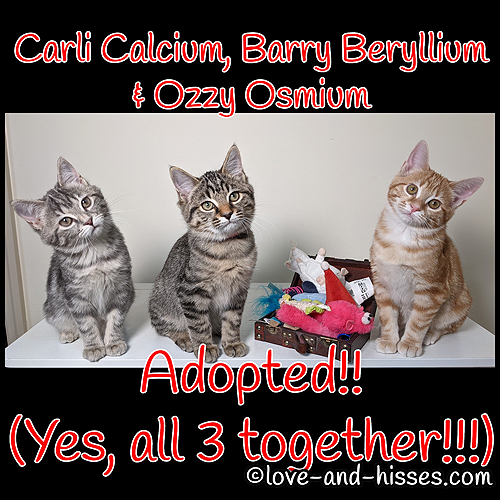 Hooray, hooray, Carli Calcium, Barry Beryllium and Ozzy Osmium were adopted – yes, TOGETHER! – and went home today! This sweet trio will be the only kitties in residence, and join a family that includes a (human) sister who will have lots of fun with them! (They will keep their names.) 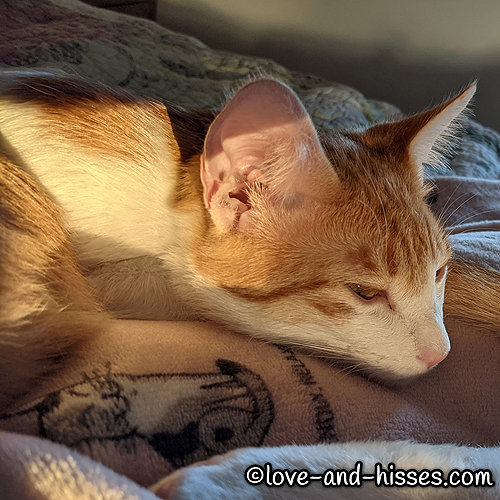