Robyn, I have a question about your cat fence. We will install a purrfect fence at our new house. When you wrote about the mancat who climbed inside the fence ( because Ivy was calling him ) and had to be let out, I asked myself, if this is possible for raccoons and martens too. What do you think? Could raccoons and martens as well climb the fence and if they do so, could they climb out themselves? Of course it is the question, why they want to climb the fence. We have some fruit trees.

I actually had to look up martens! I can tell you that possums and raccoons could easily get into the back yard in our last house despite the cat fence (and they were extremely interested in doing so, because SOMEONE who is not me would leave food out for the possums, which of course attracted the raccoons), and they had no problem at all in getting back out. In this house we haven’t seen any raccoons in the back yard, but the occasional possum wanders through. I don’t honestly know how they’re getting in and out of the back yard, but I’m glad they’re able to find their way out. I would suspect that a marten could find its way back out of the yard on its own, too.

I’ve just had a thought. Is Kristi still at Michelle’s as well? I’m suddenly imagining friendly Kristi-Wisteria interaction, and I am meeeeelting!

Kristi is still at Michelle’s, but I don’t think there was any interaction between them – Wisteria really wasn’t feeling well when I dropped her off, and she was a little scared.

I was just looking at Canasta’s early posts and cackling everytime you made a kitten prediction.

Every time I look at a post from a year ago where I was like “We’re getting there!”, it makes me laugh. Because still, at this point a year ago, we had NEARLY a month before she gave birth. Just goes to show… I know nothin’!

Have you had a meezer since Trader Joe and his litter? That was a fun bunch!

I have had the occasional meezer since then. Such as… 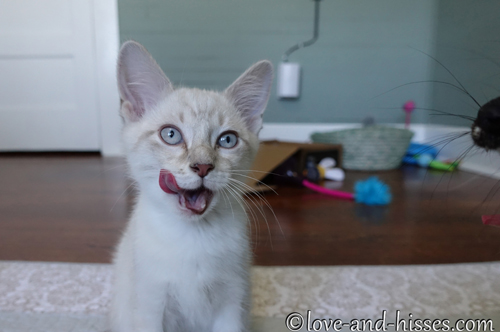 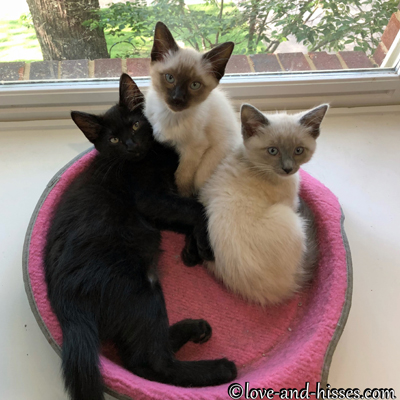 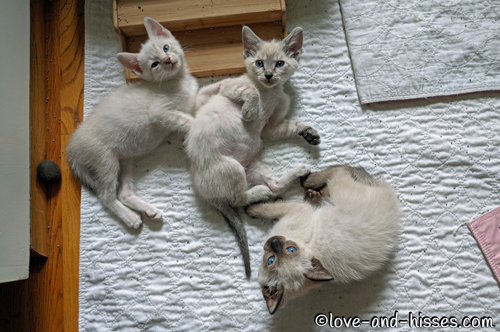 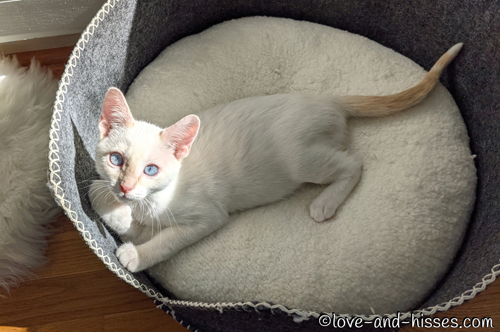 Snowcone, 2020. (You can see him – he’s now Charles – and his sister Candy Apple (now Cleopatra) along with their gorgeous siblings over at Facebook.) 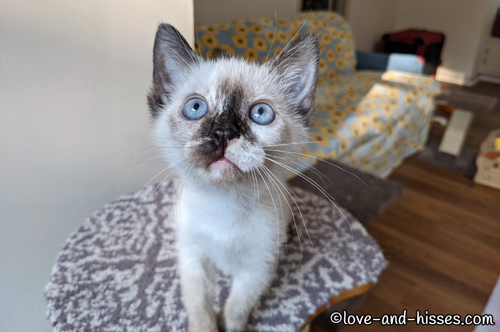 And Hannah Hollandaise, 2021. (She’s now Mia, and you can see Mia and her sister Tia (Teriyaki) over at Facebook too!)

So basically after the Grocers in 2014, we had no meezers for like three years and ever since we’ve had at least one per year. I wonder if we’ll have another meezer this year or if Wisteria was our yearly meezer allotment.

Robyn – When I see a post about one of the kittens you fostered and you can see that they are safe and secure and in a home where they are loved and valued, I imagine that it is like knowing that a child you raised is doing well in life. I imagine it puts a smile on your face and a warms your heart a great deal. I know it does those things for me and all I did was watch them grow up.

I adore getting updates on former fosters – it absolutely warms my heart, and I love getting to see the kittens I knew for the first few months of their lives as fully-grown (and very loved) adults. I guarantee y’all that if you adopted a cat or kitten who was fostered, their foster parent loves getting updates on them. It’s the BEST.

So in Friday’s post, when I talked about picking up Wisteria and leaving her at Michelle’s house, I might have left off what I did after I left Michelle’s. Upon leaving Michelle’s, I drove about half an hour down the road to Athens Animal Control (this is the same facility Charles and Caroline came from, it’s where Margeaux and Katriane came from, and I’m pretty sure that all of the Mainers kittens came from there too), picked up a cat they thought was pregnant, and took her back to the vet where I’d just picked up Wisteria an hour earlier. I left that cat for an ultrasound, and had almost made it back home when I got word that the ultrasound was completed, and I could go back and get her. So I turned right back around and picked her up, brought her home, stashed her in the bathroom for a couple of hours while I deep cleaned the foster room, and then I moved that girl right in. 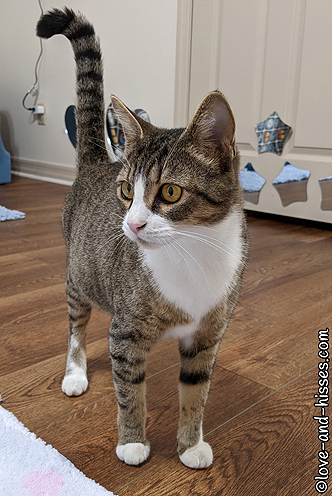 This gorgeous brown tabby and white girl (white feet! white bib! pretty pink nose!) is definitely pregnant. The vet could see “several” kittens, but couldn’t say exactly how many since the kittens had not yet mineralized (google tells me that that happens 40 – 45 days of gestation.) The vet said she was at least 30 days along (usual gestation for a cat is 60 – 65 days), so we’ve got a few weeks.

To be honest, if she hadn’t had an ultrasound, I would still have been able to tell that she’s pregnant. She’s got the belly, she’s got the sway, and most telling of all: she’s got the appetite.

(I always forget just how voracious pregnant cats are. That alone should have told me that Ivy and Wisteria weren’t pregnant, they didn’t have that appetite.) 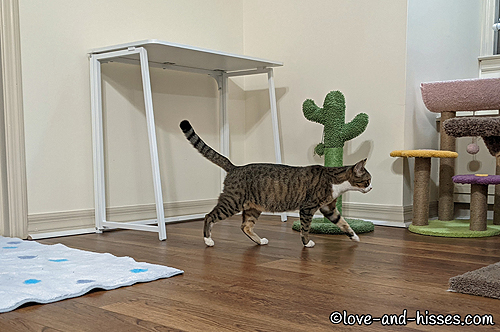 I love her stripes. 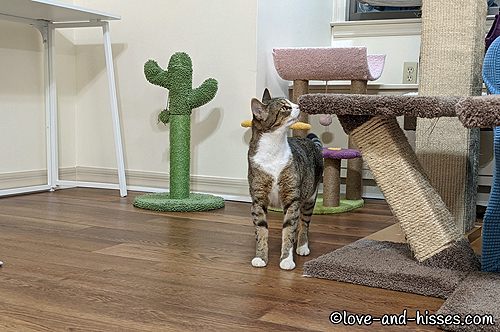 She is one confident girl. 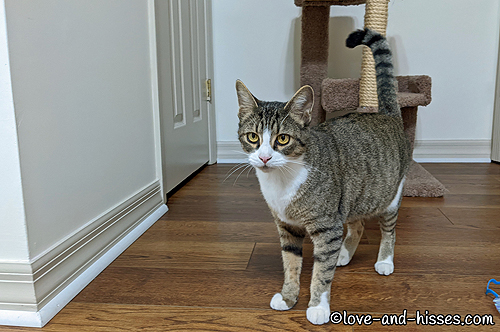 And just so PRETTY. 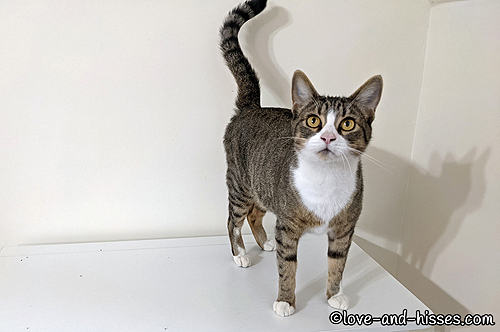 Clearly she’s been watching TikTok makeup tutorials, because her eyeliner is ON POINT.

Her story is that she was an owner turn-in; the owner said they couldn’t afford to keep her any more. Her name was “Mama,” which indicates to me that this likely isn’t her first litter. It’s certainly her last, though! She’s young, but not super young like Ivy and Wisteria – I think she’s about 2 years old.

The naming theme: still going with invasive plants/trees (a Mimosa is a gorgeous, invasive tree here in the south), because there IS GOING TO BE A KITTEN NAMED KUDZU. I’ll call this bunch The Sprouts (I would go with Saplings if they were all invasive trees, but Kudzu is a vine, and some of the names on the list are plants, some are trees – it’s a mishmash. I think Sprouts works fine.)

(Yes, they could very well be born on Valentine’s Day. No, I will not be changing the theme. Mimosa has a name, and I have a naming plan and I AIN’T CHANGING ANY OF IT.) 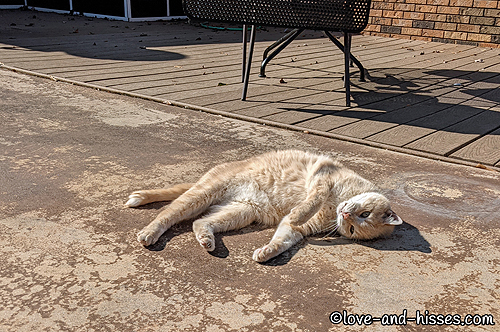 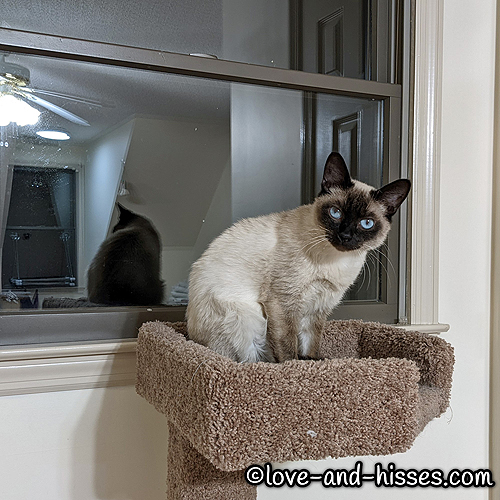 In case you missed it in the blog this morning, Wisteria is (1) a faker (no kittens in that belly!) and (2) adoption pending. She also has an upper respiratory infection, for which she now has medication. Ordinarily she’d come back to my house to have her course of medication and wait for her spay to happen (it’s scheduled for February 10th), and while I’d love having that time to get to know her, that ties up my foster room, meaning that I wouldn’t be able to take more fosters. With kitten season starting to ramp up, it was decided that the people adopting Wisteria will foster-to-adopt her (she’ll be formally adopted once her spay is done). Michelle is going to deliver her to her new home, and so rather than bring her home with me and then have to take her to Michelle’s, I took her to Michelle’s straight from the vet yesterday.⁠

(And yes, of course I’ll share any updates I receive!) 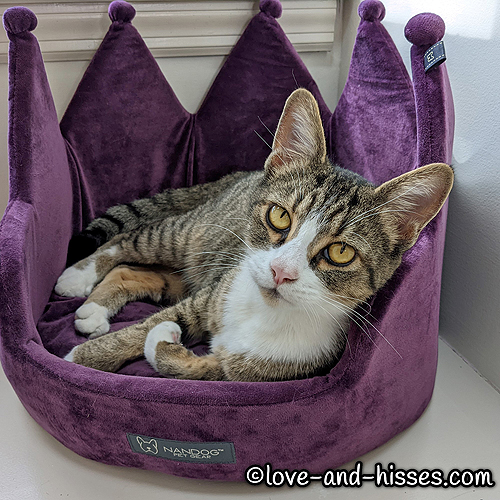 YouTube link
Innernets, say hello to our new foster Mimosa. (Mimosa as in the tree, not the drink!) (If you missed it on social media, Wisteria turned out NOT to be pregnant – and she is adoption pending. The people adopting her will foster-to-adopt (the adoption will be final once she’s been spayed), and she’s going there today.)

Mimosa is young-ish – I’m aging her at 2 years old. She may not be that old, but she’s definitely more than a year old. She was an owner turn-in at our local animal control, and they were calling her “Mama” (which makes me believe that this probably isn’t her first litter.) Mimosa has undergone an ultrasound at the vet Forgotten Felines of Huntsville uses, and the vet has confirmed she’s pregnant. We probably have 2 – 3 more weeks (guesstimation on my part; you know I’m never right with my guesses, though!) She’s super sweet, very curious, and isn’t the slightest bit timid or scared. 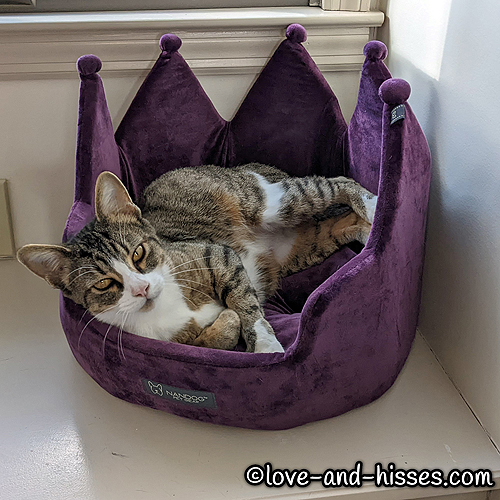 Good night innernets. (Mimosa, who obviously has a favorite place to snooze. Because she’s the queen!) 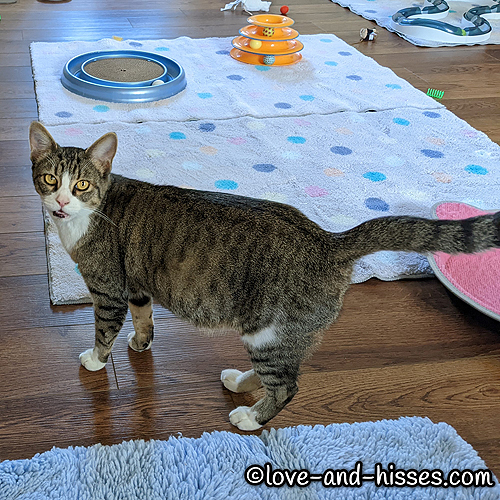 Mimosa wonders if it might be time for a little more canned food. I love that her lower lip is mostly black, and I really like her eyeliner. And that little pink nose! 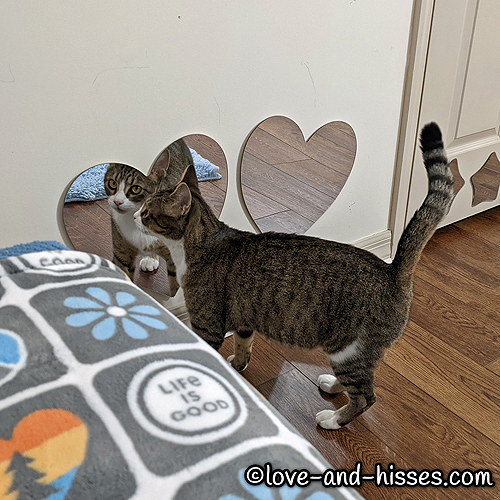 YouTube link
We haven’t seen Mimosa play much (there’s been the occasional tussle with a toy mouse), but when we got out the Da Bird teaser, her eyes lit up. I guess she’s a good hunter! (Da Bird teaser, made by Go Cat, can be found on Amazon and (I think) Chewy, and I’ve seen it in Petco.) 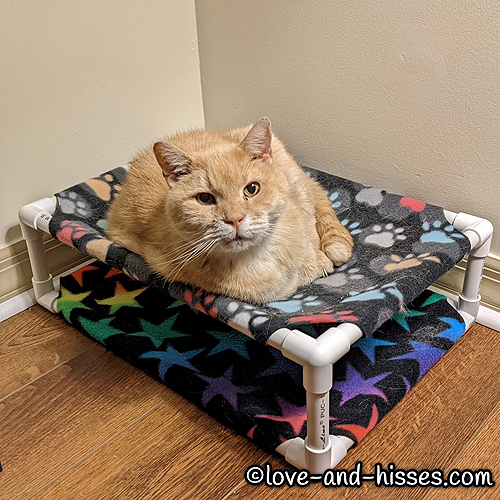