NO KITTENS (unless they came overnight, and as usual I’ll update this post when I roll out of bed in the morning.) 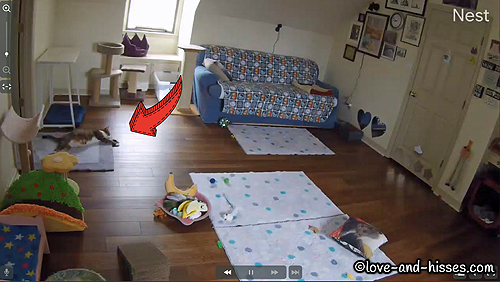 A screenshot from the Nest camera. She loves hanging out on that rug between the room and the litter closet SO much. 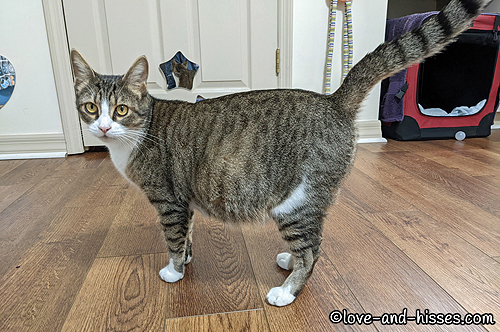 Yes, the belly grows ever larger. 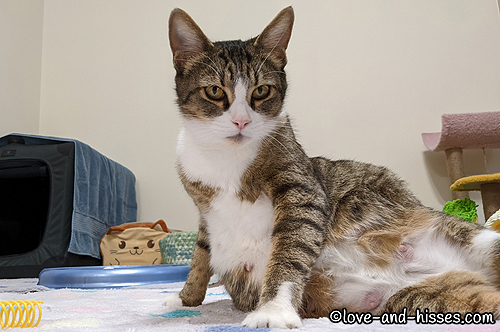 She still doesn’t look miserable enough yet, according to Fred. 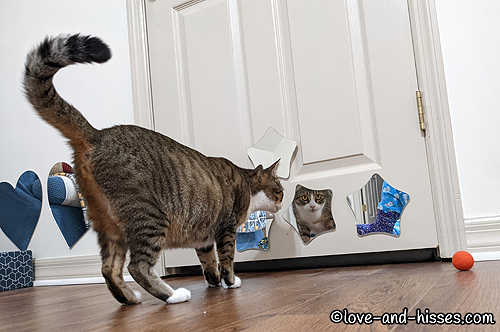 The way she uses those mirrors to keep an eye on me just cracks me UP.

So at this point – unless she has them today (or had them overnight), I guess we’re going to get March babies.

Mimosa still isn’t anywhere near Canasta’s record yet – Mimosa’s been with us for 32 days; Canasta went 47 days. I don’t see how Mimosa could possibly hang in there for another two weeks, but of course when it comes to cats you can never say never.

For Christmas, Basepaws was having a decent sale, so I got a couple of cat DNA tests – one for Jake, one for Charlie. I sent them in and waited and waited… and finally got the results, which I am sharing with y’all. First, Jake. 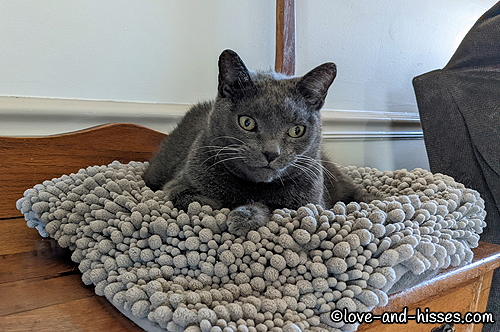 Jake looks like this, if you had forgotten. Most people think he’s got Russian Blue in him, and possibly… something else that I forget.

And the DNA results say… 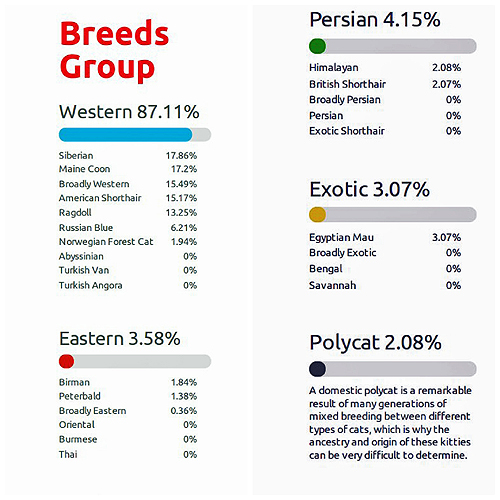 So in other words, Jake is more Siberian than anything else, has a healthy dose of Maine Coon, Broadly Western, American Shorthair, Ragdoll, and only 6% Russian Blue. As Fred pointed out, Jake is the very definition of the cat version of a mutt. 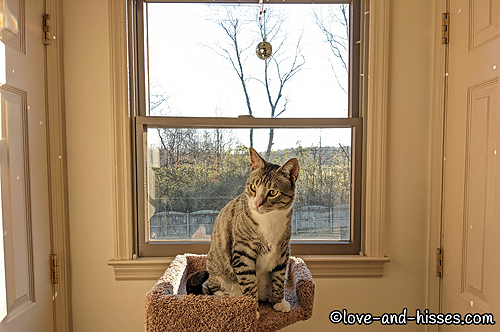 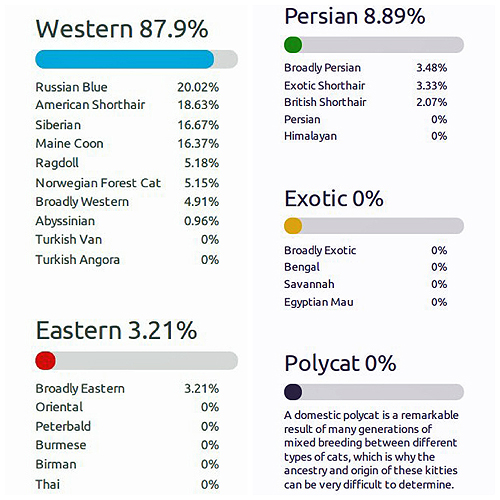 I would never have guessed Charlie to be 20% Russian Blue. I was unfamiliar with the American Shorthair (18%) so I did a Google search, and the cat at the top of this page looks, coloring and markings-wise, a lot like Charlie. The Maine Coon (16%) could certainly account for his size (he’s a BIG cat).

I’ll put these results on their Permanent Resident pages if you’re interested in referring back to them at any point (though I’m sure I doubt anyone’s as interested as I am.)

So we’ve had DNA tests on 3 of the 7 (you can see Khal’s here). Maybe next Christmas we’ll get more tests and test the remaining 4!

YouTube link
No kittens! But Mimosa wants breakfast and I’d better hurry it up. 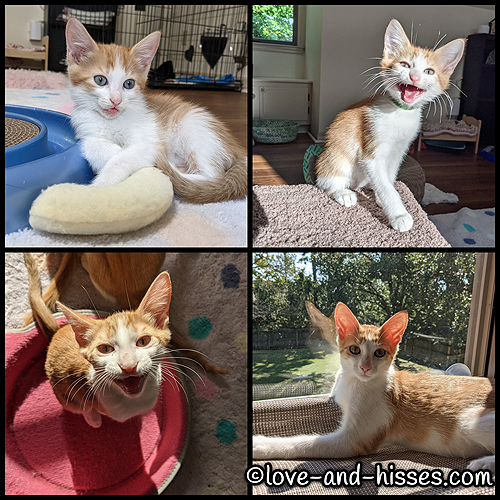 Former foster Franco Fondue (one of the Dippers kittens) is unfortunately being returned to Forgotten Felines. (Please be kind – it was a hard decision for his family to make, but Franco’s need to play was too much for their other kitty, and they decided it would be best for them both.) His description is below – if you are in the Huntsville, Alabama area or willing to come here and are interested in adopting this sweet boy, please contact Forgotten Felines of Huntsville at info@ffhsv.org⁠

Franco Fondue was one of 5 kittens born to Molly Marinara. He is everyone’s friend – he was the most confident kitten in his litter, was the first to climb into his foster mom’s lap, and when he’s grabbed up for a kiss he just smiles, tolerates it, purrs a lot and patiently waits to be put back down so he can race off to play. He views new things with interest, and if there’s a toy tossed for the kittens, he’s the first one to run after it and grab it. He loves to boing up in the air after the feather teaser, is 100% sure he will solve the mystery of the track toy, and if you toss a ping pong ball, a rattly mouse, or really any toy at all, he will race right over to investigate. He loves a good belly rub (when he can slow down enough), enjoys a snuggle, and loved to pile up with a sibling or two to nap. He will do great with other cats, but truly needs one(s) who are not intimidated by his desire to play & wrestle & snuggle! He must join a home where another playful cat already is in residence. 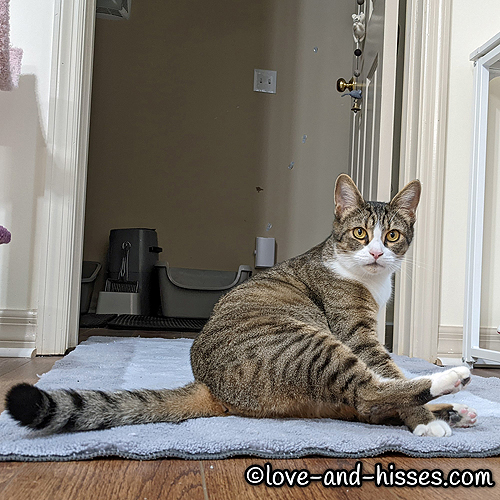 “What?”⁠ I kind of have a feeling it won’t be tonight (which totally means it’ll be tonight, right?) She’s still eating voraciously, watching birds, playing a little, and greeting me at the door (and flopping down for belly rubs.) All is well; we’re just in a holding pattern WAITING AND WAITING. 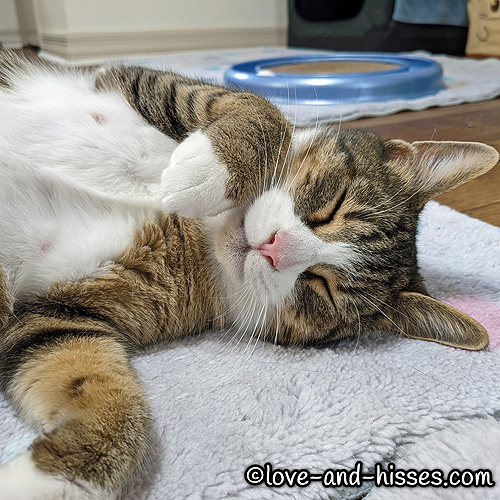 YouTube link
Time for breakfast ’cause there are NO kittens.

YouTube link
The only one not anxious to meet Mimosa’s kittens… is Mimosa. She’s like “They’re fine where they are, and where’s my belly rub?”

YouTube link
A quick video tour of the foster room setup, in case you were concerned that Mimosa didn’t have several options for safe, warm, enclosed places to give birth. Not that Mimosa cares, obviously. 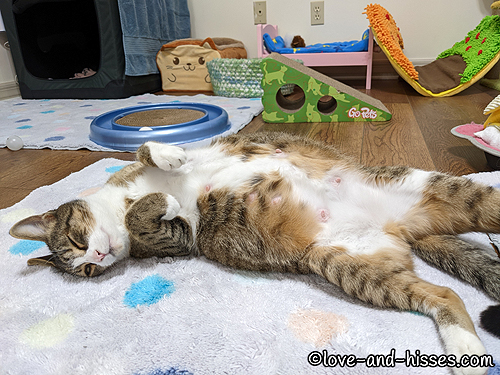 YouTube link
Good morning Mimosa! (No kittens, no labor – and I slept like a LOG last night. I woke up SURE that she’d had her kittens while I slept, but nope. I’m starting to think that those of you predicting March babies are right. Which I guess isn’t a big leap since March 1st is Tuesday!) 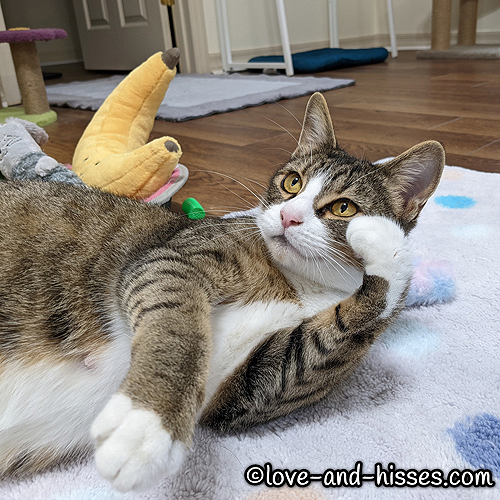 Mimosa’s all “Lady, you come on over here and get yer knuckle sammich.” #PowRightInTheKisser 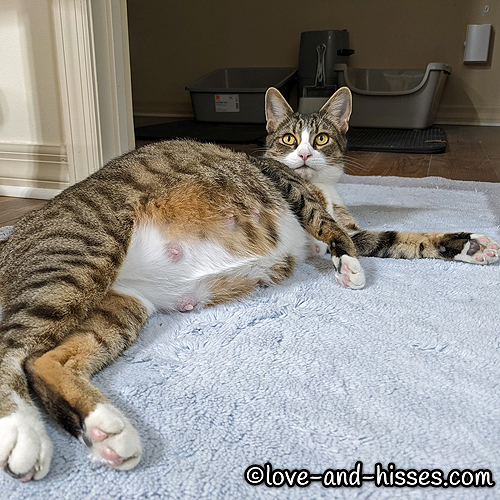