The fosters known collectively as The Vittles are basically three 5-kitten litters put together in one big litter. They joined us on October 5, 2020. Their date of birth is July 29th. They are Pistol Annie’s kittens – Pistol Annie is currently at Michelle’s house trying to decide whether humans can be trusted (she runs hot and cold on the idea). She and her kittens (and some older kittens and the father) were trapped by Michelle and Gayle, who went to trap 6 and ended up with 11. (!) Their date of birth is July 21st. They were born to a scaredy mama (Cotton Candy), who is currently at Michelle’s house. She was living in a trailer park and it took a young lady about a year to befriend her. She finally got her inside just in time for her to give birth to her kittens. Three of them were born with their feet turned around backwards, and the lady knew she needed help. Michelle took them and splinted the kittens’ feet. I have looked at those kittens’ feet and they look perfectly normal now. Also, the kittens in this bunch have very short tails (nubs, really.) You can read about the Vittles beginning here. There are links at the top and bottom of each entry; click on the one on the right to take you to the next entry.

You can see all the pictures taken of the Vittles kittens here at Flickr, or scroll through them below. 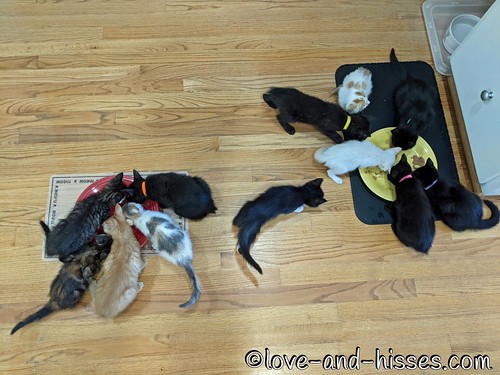