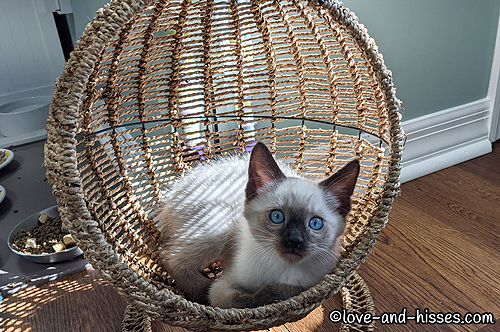 Lalo in the Fruittasan, considering a nap. 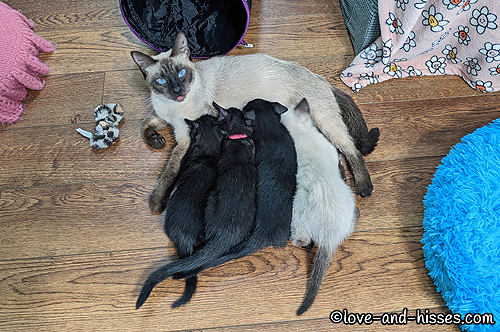 Yep, the milk bar does occasionally open – though not all that often, and CERTAINLY not for as long as the kittens would like! Kittens from left: Mike, Francesca, Saul & Lalo. (Just after I took this picture, Kim got to her feet and led me to the food dish to let me know she could see the bottom of the dish.) 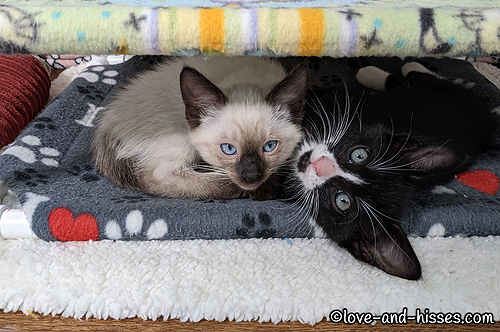 Lalo and Saul are all “‘Scuse you, lady, we tryin’ to nap here.” 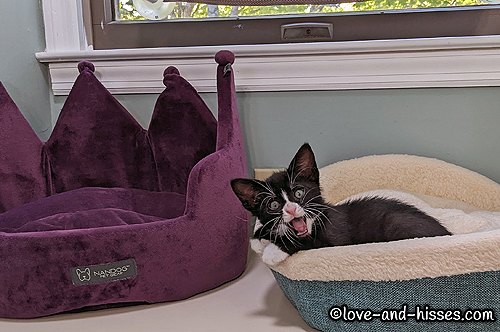 Saul with the crazy eyes and the crazy whiskers and the “What you DOIN’, lady?!” 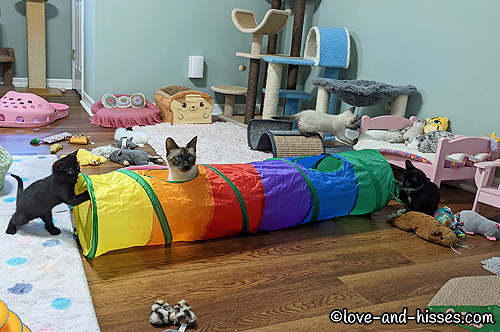 Kim likes this tunnel much more than the other one I had out. It’s got portholes! 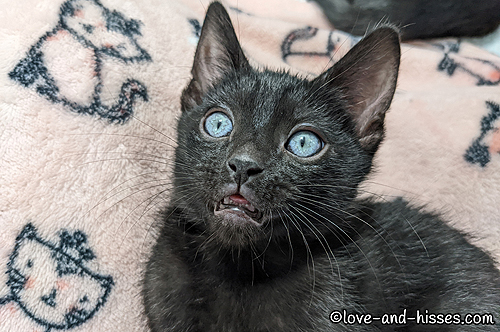 I don’t know what just happened, but Gus is appalled. APPALLED, I SAY. 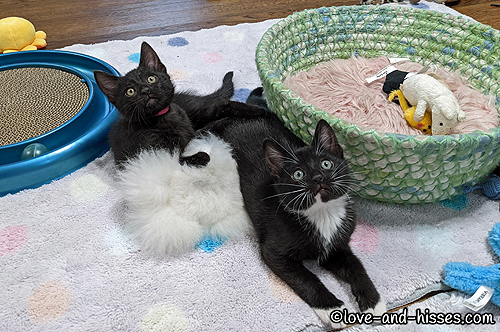 The girls (Francesca and Nacho) hanging out. 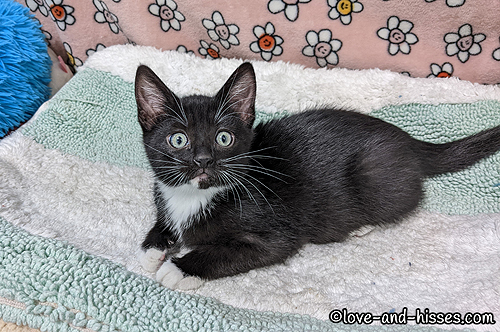 Nacho’s eyes totally match the green on the mat she’s lying on. (I would call that “seafoam.”) 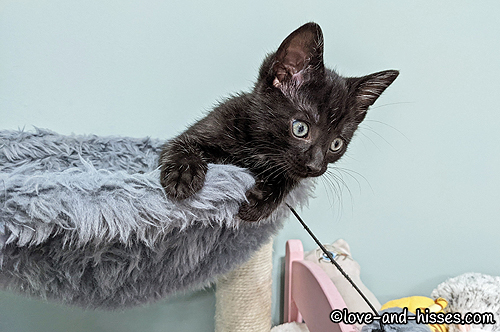 Mike in the hammock, keeping an eye on things. 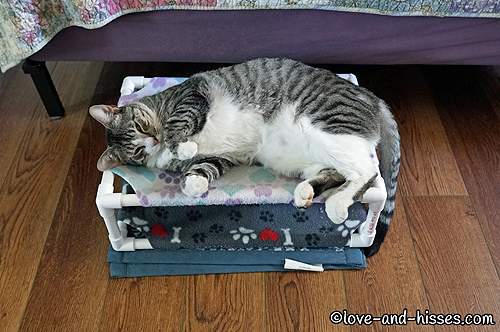 It must be fall weather out there, because Charlie is spending his days snoozing in the ham-mick at the end of my bed. Are you thinking to yourself “Wow, that boy has grown up!”?

Well this is Charlie (he was Aramis then) in a ham-mick (same size as the one above) almost exactly two years ago. 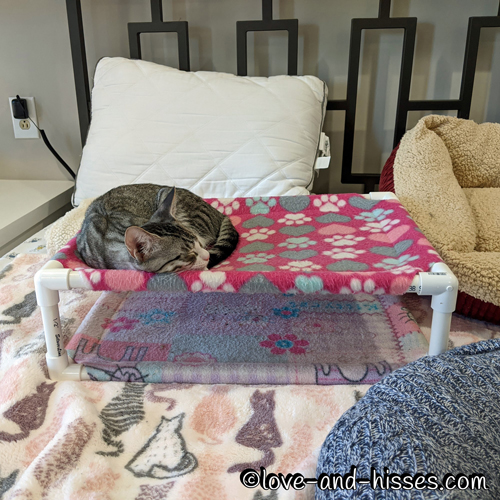 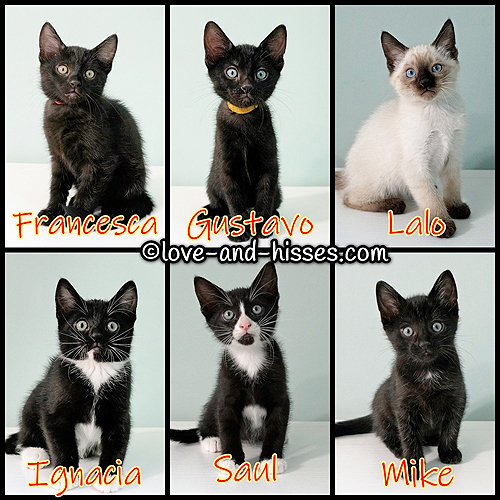 Look look look who’s 9 weeks old! THESE kittens (except, of course, for Mike, who will be 9 weeks on Sunday. For those who missed it/can’t remember: Mike was left behind in a bale of straw by his mama and needed a place to go. He came here and was immediately accepted by Mama Kim Wexler and the kittens. He might be smaller and a bit younger, but he doesn’t let it stop him for one tiny second.) 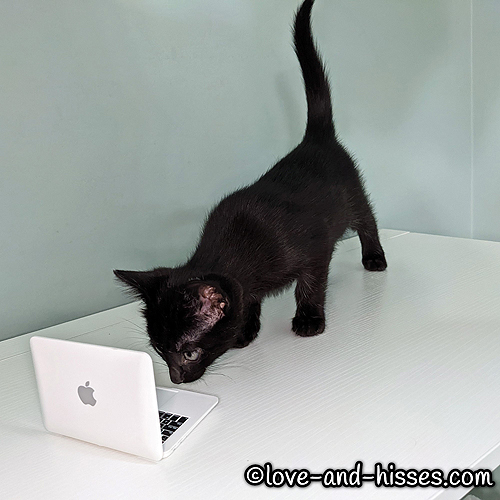 Mike’s keeping a close eye on his bids.

YouTube link
Francesca spits at mama not once, but TWICE (I actually missed the first spit when I was making the video.)⁠
⁠
When kittens this age spit, it’s not usually an aggressive act (unless it follows hissing and growling), it’s more playful. Sometimes it can express frustration – if a kitten is trying to reach something, they might spit out of annoyance. But you can see here that Francesca is just trying to show off for her Mama (maybe trying to get her attention or saying “I’m coming for you!”) 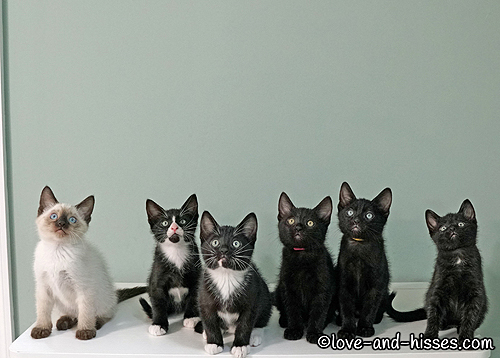 YouTube link
Mama Kim Wexler has been playing more and more often recently. The kittens aren’t QUITE sure what to think of this development! 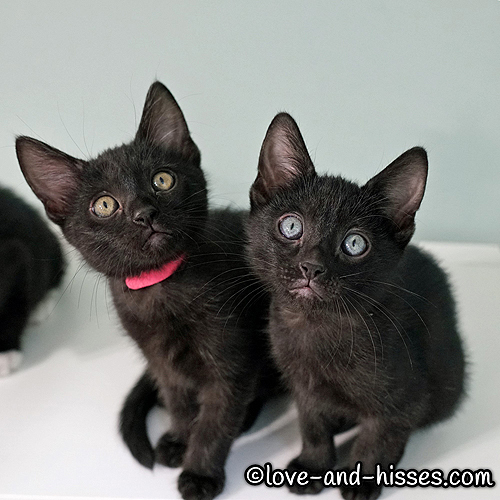 Francesca (left) and Gus. The difference in their eye colors is just amazing! (His eyes tend to photograph as bluer than they are – they’re changing to green, but he still does have a lot of blue.) 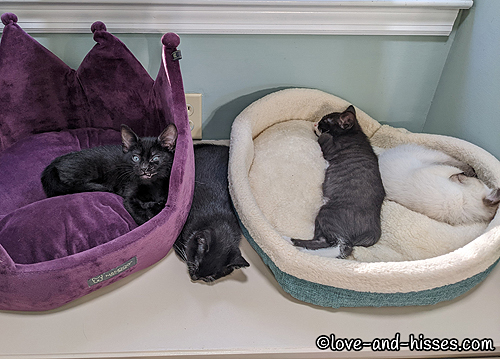