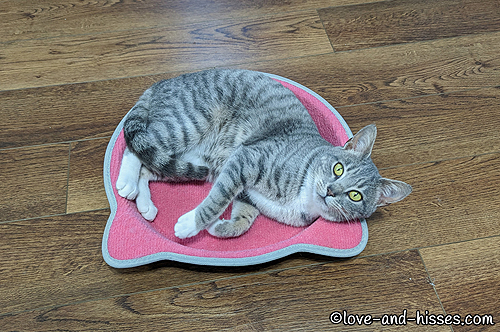 If you’re thinking Brioche spends a lot of time in that pie plate, you are correct. There’s something about it she really likes (and yes, of course I’ll send a pie plate home with her when she’s adopted!)

Her heat cycle continues, but she is still pretty quiet about it. If I HAVE to have a cat in heat, a quiet one isn’t so bad. 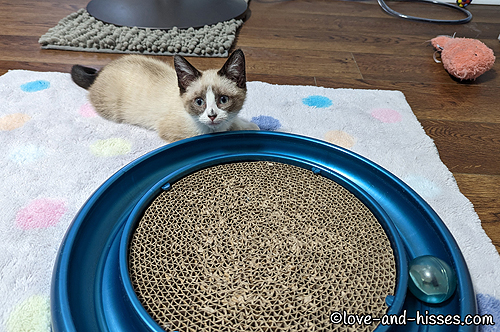 Linzer, track toy afficionado. (Side note: that is a Bergan Starchaser track toy; the ball lights up. If you have another version of this track toy and just want the light-up ball, search on Bergan Twinkle replacement ball on Chewy (link here) and it should work just fine.) 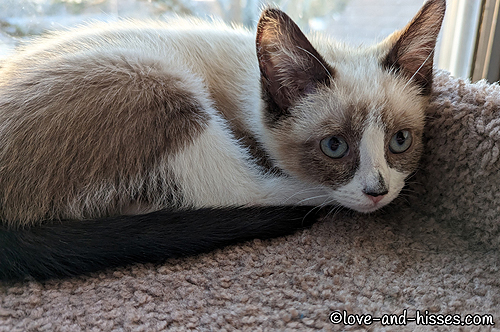 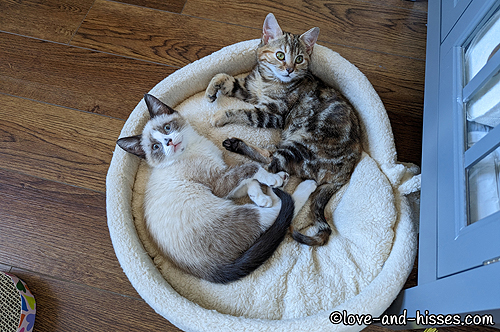 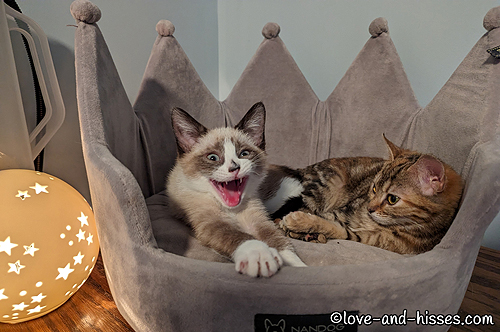 Linzer’s all “YOWZA!” and Cinnaspin’s all “That girl just ain’t right.” 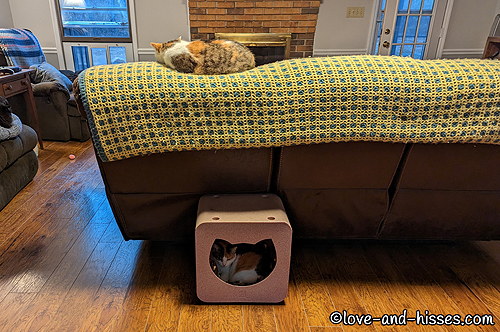 Two calicos in one shot. (Trixie on the back of the couch, Alice in her pink cube.) 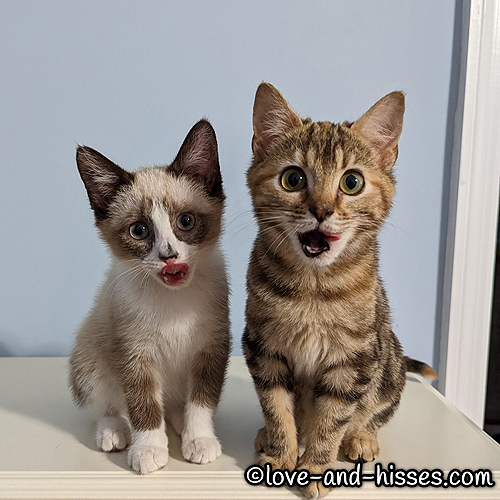 We have a former foster update! Brown tabby boy Drum (from the Magnolias litter, 2010) and housepanther Branwen (foster name: Juniper, from the Evergreens litter, 2016) and their family have very recently moved from Huntsville, Alabama to the Albuquerque, New Mexico area! The trip went well, and everyone has adjusted. And this is what they’re up to now!⁠ 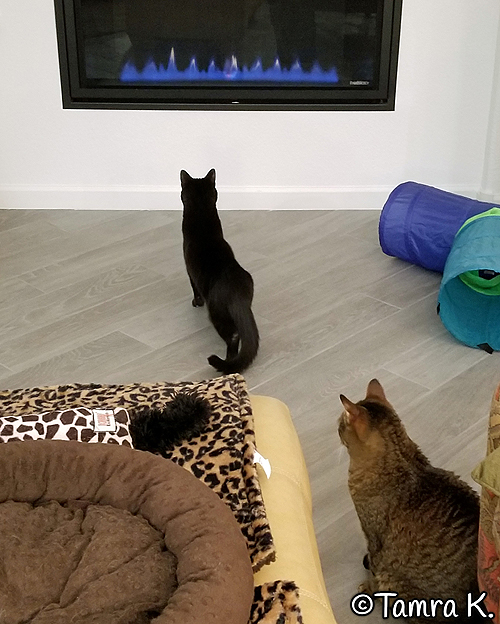 Branwen and Drum, checking out the fireplace (pretty cool!)⁠ 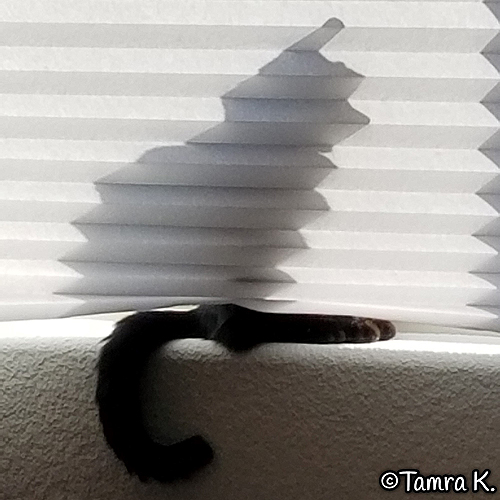 Branwen is pretty sure you can’t see her. No you can’t. NO you can’t!⁠ 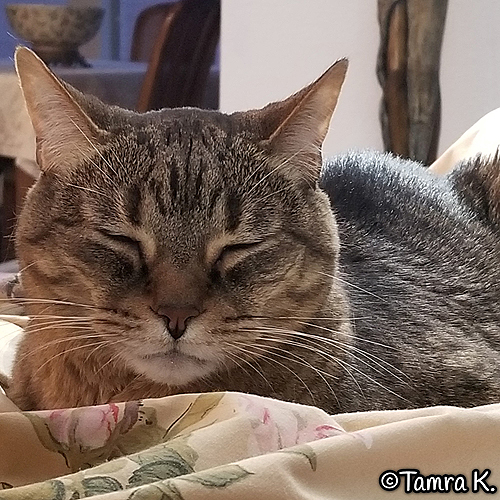 Drum was playing a game of Love Eyes because he is just the sweetest.⁠

YouTube link
Linzer and Cinnaspin – who literally JUST ate breakfast – are intrigued by Uncle Newt’s breakfast. Will he share? He will NOT, and they can’t believe it. 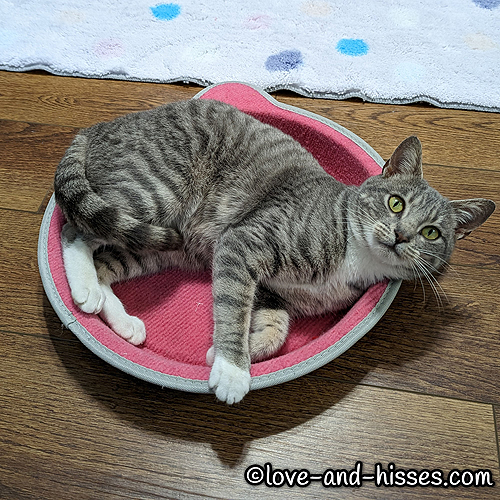 It’s a Brioche pie! (My favorite!)⁠

YouTube link
Brioche (our new foster, who we thought might be pregnant when we first got her; I introduced her Wednesday) is still in heat, but I’ve gotta say: she’s not doing the super loud howling (YET), she’s probably the quietest cat in heat I’ve ever had (and I am not complaining!) 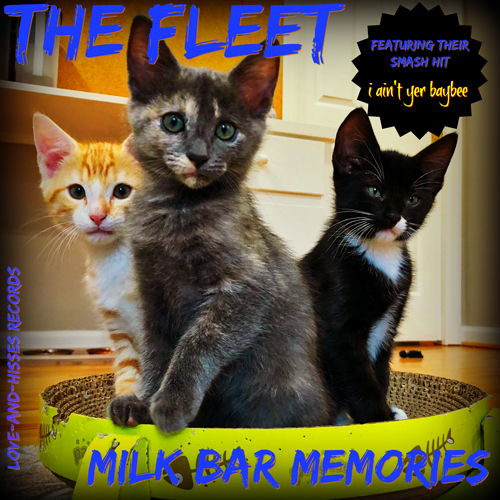 Throw Back Thursday: I ran across this picture from 2018 (that’s Clutch, Dynamo and Cam from Ryder’s Fleet) and it made me laugh, especially “I ain’t yer baybee.” 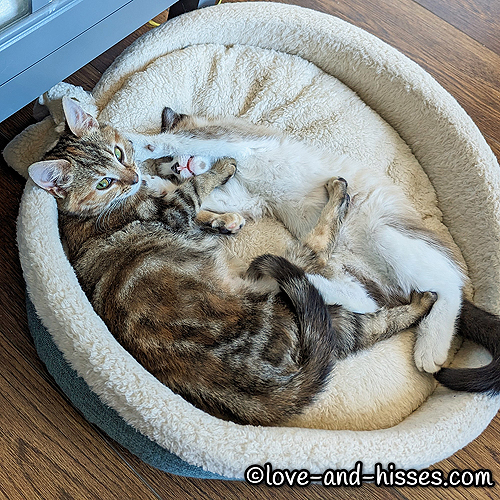 Good night innernets. (Cinnaspin, looking annoyed, and Linzer – who was out cold sleeping like that.)