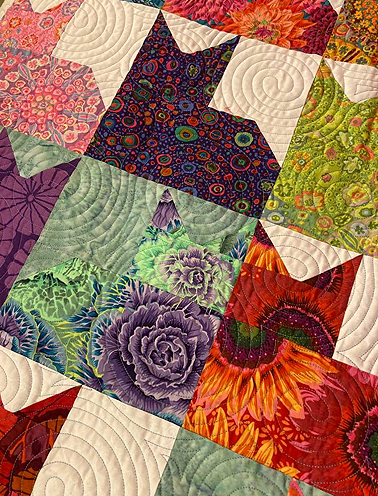 You can enter as many times as you like, for $5 per entry. There’ll be a live drawing Saturday around 7:15 (Central Time) from the foster room (hopefully I can get Linzer and Cinnaspin to help out!)

To enter: Check out the auction page or just send $5 per entry to forgottenfelineshsv (at) yahoo.com and note “QUILT.” You can enter RIGHT NOW through Saturday at 7 PM (Central Time.) Saturday evening (7:15ish) we’ll draw a winner live. You DO NOT have to live locally or even in the US – we’ll ship the quilt to the winner (at no cost to the winner) anywhere in the world.

All proceeds benefit the Forgotten Felines of Huntsville Spay/Neuter fund.

Update on Francesca and Nacho: they are adapting well to being at Petsmart, and are being well cared for by the volunteers. Hopefully they’ll get to go home very soon! 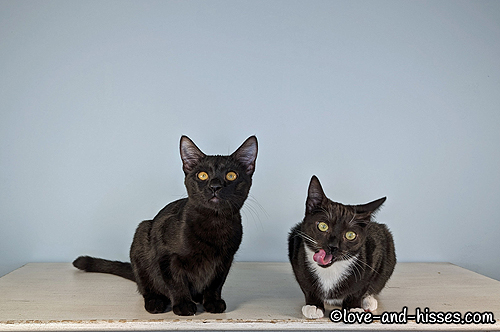 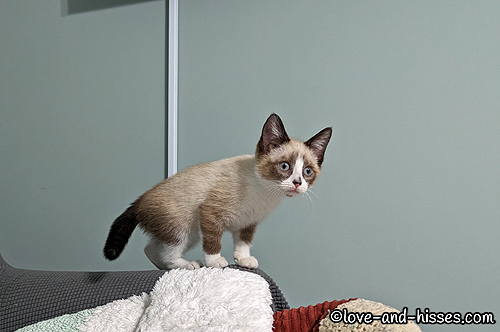 Linzer’s keeping an eye on Cinnaspin. 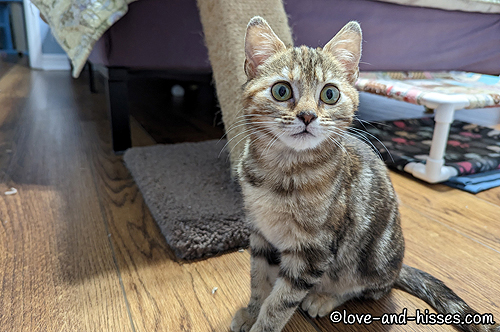 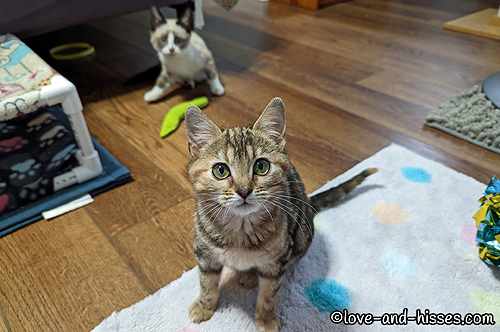 All eyes on me. 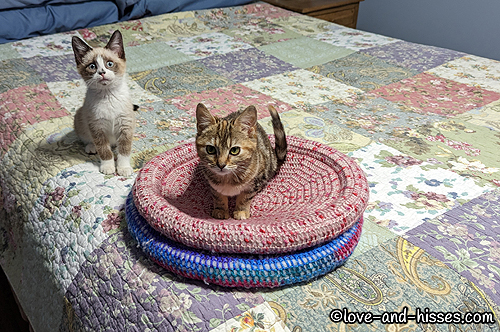 So Cinnaspin and Linzer are doing well. They have the run of the upstairs during the day, and since they’ve been with us for 4 weeks now and have had their first vaccinations, I feel pretty safe in allowing them access to the rest of the house during the day. I’ll start letting them explore later today, most likely, and we’ll see how that goes. They had a very short meeting with Uncle Archie last night. Cinnaspin just looked at him from afar – Linzer went in for a nose sniff, and then Uncle Archie got overwhelmed (he is easily overwhelmed) and went back downstairs.

They are both just total snugglebugs, and while I can just lean down and pick Cinnaspin up, Linzer will still skitter away. But if I sit down and talk to her, she comes right over to me. Linzer lives life according to her own rules, is what I’m saying (and they are both big Churu fans, so if I need to lure Linzer closer, that’s the simplest way to do it.)

They’re 11 weeks old now (as of yesterday), and hopefully their spay surgery will be scheduled soon. 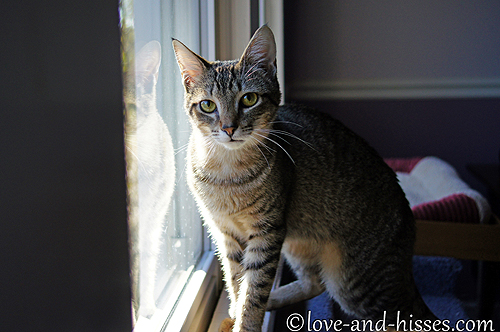 An old shot of Dewey (from 2017), so y’all don’t forget what a pretty boy he is. (For newer readers: Dewey avoids having his picture taken, and I am respecting his decision (since I don’t want him to run away every time he sees me.) I live in hope that he’ll change his mind, but it’s been like 5 years so I think he’s pretty set in his decision.) 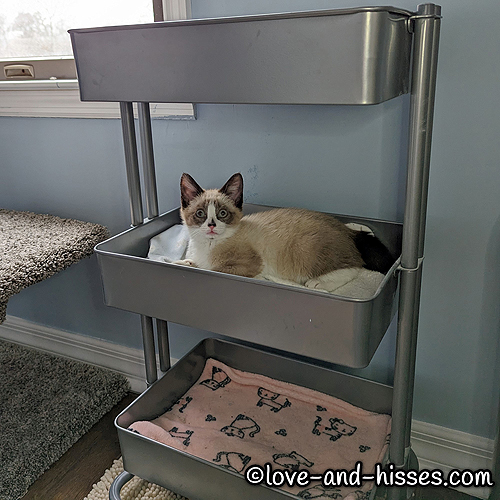 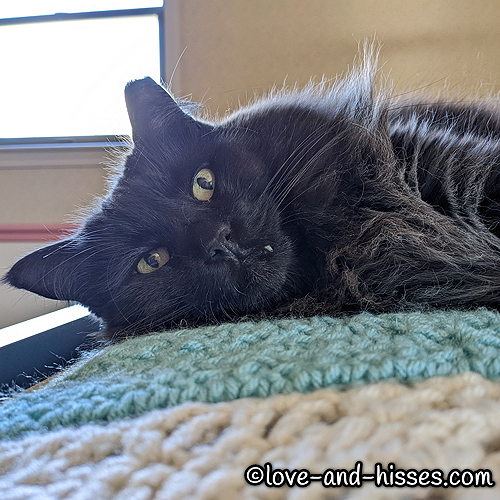 It’s Friday the 13th, so if a magnificent black cat crosses your path, kiss him for luck. ❤️ (That’s permanent resident Khal. And yes, I did kiss him!) 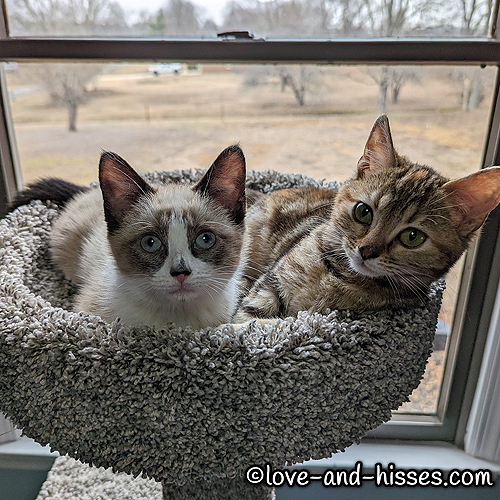 Linzer (left) and Cinnaspin, all snuggled up for a nap.

YouTube link
As expected, Linzer and Cinnaspin think that track toy is AMAZING. 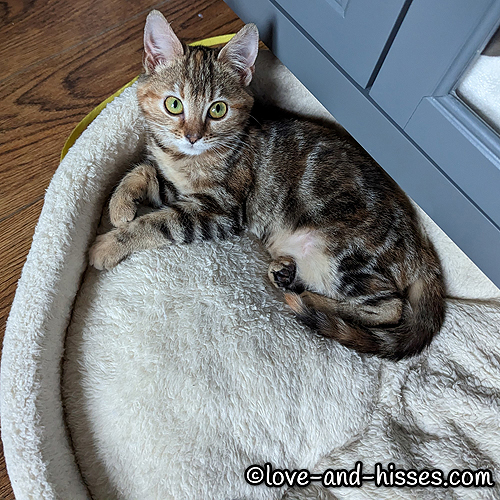 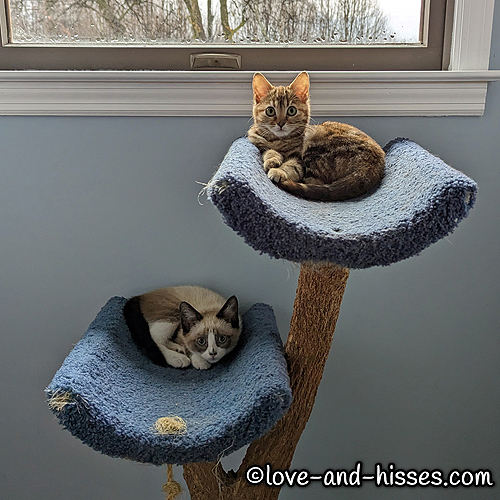 Good morning. We are grumpy because we were promised sunshine and there ain’t no sunshine. (Linzer, left, and Cinnaspin) 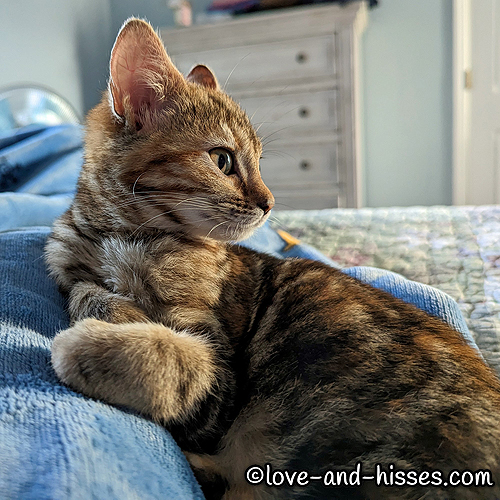 Cinnaspin is all “Stop moving around, lady, I’m trying to NAP.”

YouTube link
Cinnaspin has discovered the dog fur toy* and thinks it’s very, very interesting.⁠
⁠
*It’s a big ol’ wad of dog fur that we brushed off of our Great Pyrenees dogs George and Gracie (who have been gone for several years). I ran the dog fur through the washer for multiple cycles until it kind of felted together. To me it doesn’t have a smell, but cats and kittens always find it intriguing. 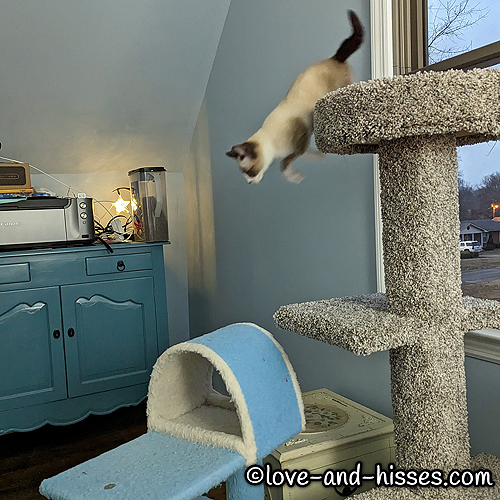 Watch out, Linzer’s got places to GO! 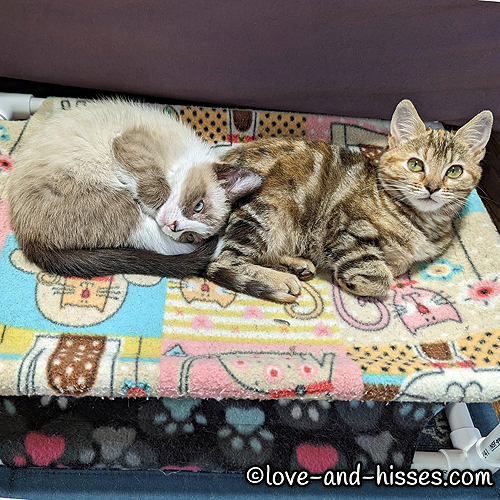 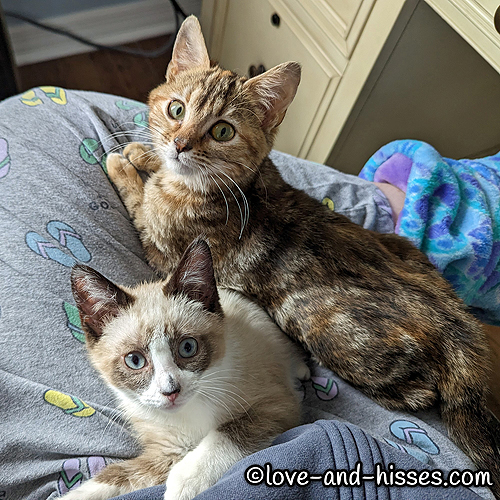 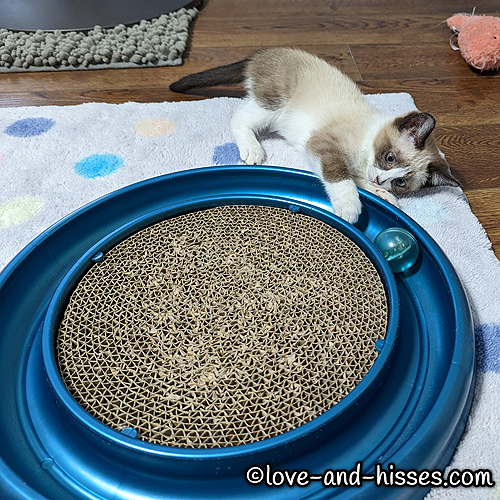 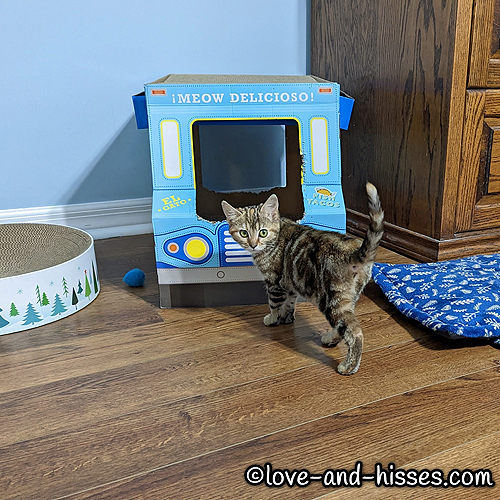 No, I did not send the taco truck with Kim (I did send her tunnel and a ton of toys, though!) The taco truck was purchased by this little entrepreneur (Cinnaspin), who is headed off to make the tacos right now.

YouTube link
Are Cinnaspin and Linzer napping peacefully, or are they kicking each others’ butts? I don’t think you even need to watch the video to know the answer to that. 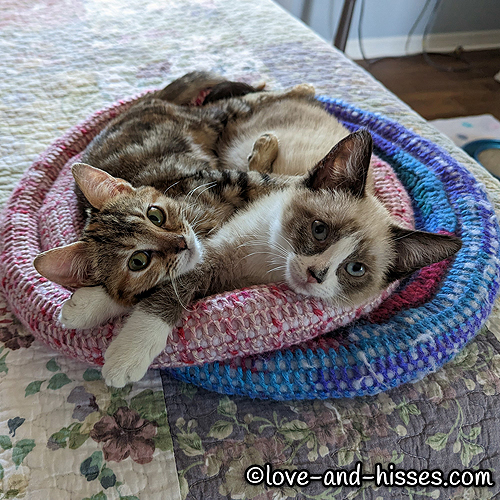