Do you think Cinna and Linzer will keep their compact shapes, or have they just not hit the long and lanky stage yet?

They haven’t hit their long and lanky stage yet, but I do think that Cinna’s going to stay small. She’s got these tiny, delicate paws compared to Linzer’s regular-sized paws.

So many Siamese cats lately! Do you have a lot of that colouring in your area? Could they be related?

There do seem to be a lot of Siamese mixes that go through our local animal control – it’s a pretty high-volume facility, and they’re nearly constantly overrun – but as to whether they’re related, I have no idea. I know that the Outlander meezers (Ian and Fergus) came from the same facility as Kim and her kittens, and (I think) Linzer came from that same facility, so maybe?

What makes Cinna torbie and not tabby?

From Kara (thanks, Kara!) – Simplified, she has both orange and black stripes. Tabbies have either one or the other.

If you click on 2011 at the bottom of the post it looks like you get to see the origin of Alice Mo the Calico! Such a cutie!

I cannot believe it’s been… um… carry the one…12 years since she showed up on our front porch! (I still remember how bitterly cold it was as we stood outside trying to convince her to come out from under that bush.) Also, blast from the past: we were returning movies to Blockbuster! Wow, time has flown.

PS: For newer readers, the vet told us that Alice would always be a small cat – probably not more than 6 pounds. HA. (She is currently 11 pounds.)

You might have already said this, but what breed is Linzer? She looks part raccoon!

From Janet (thanks, Janet!) – I’ve had cats that look like this before, but never with the racoon eyes. As far as I know she’s a regular American Short Hair, with sealpoint/snowshoe markings. I always named such a cat Fimbledorfer! They are really sweet natured, and smart. I had one once that learned to use the human toilet. 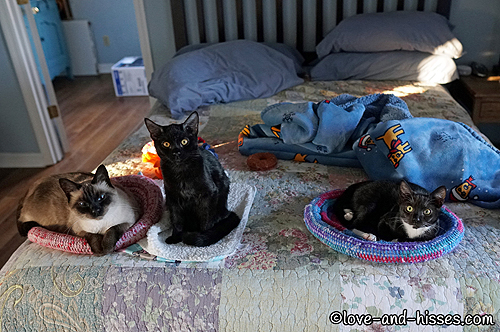 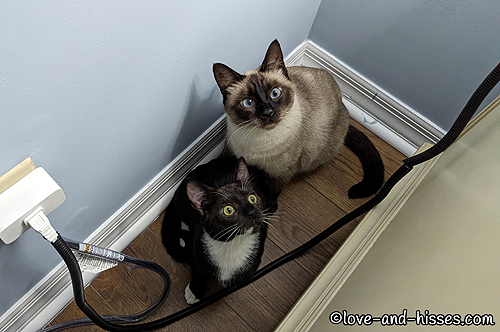 Kim gives me the Eyes of Innocence. “We were not, in fact, sitting here messing with these cords, lady. We heard a noise and wanted to be sure there wasn’t someone hiding over here. Rest assured, we’re keeping an eye out for your safety.” 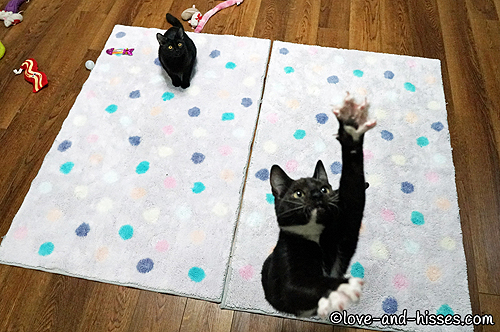 Fred got out the feather teaser, and Nacho got her BOING! on. 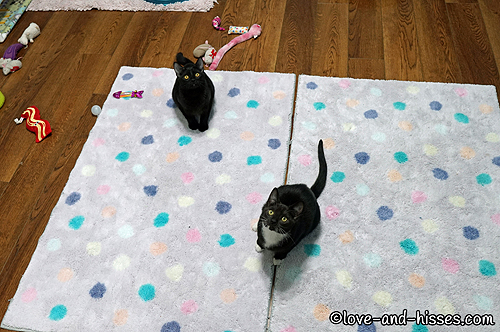 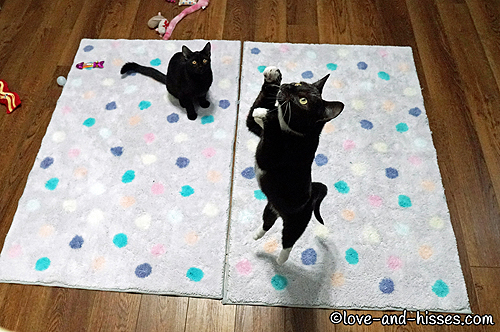 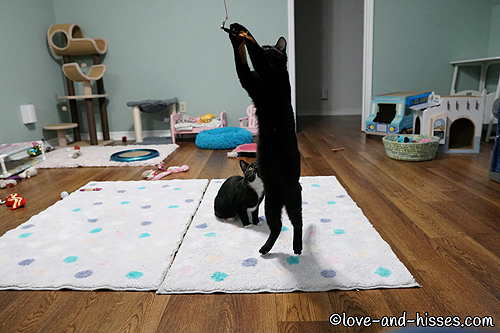 And Francesca’s GOT it. 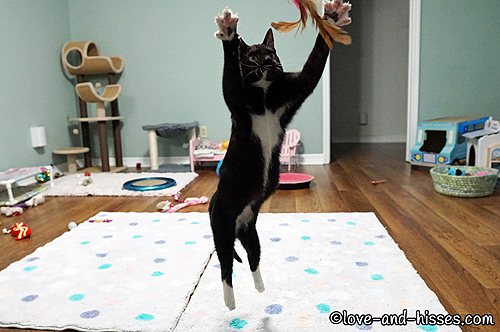 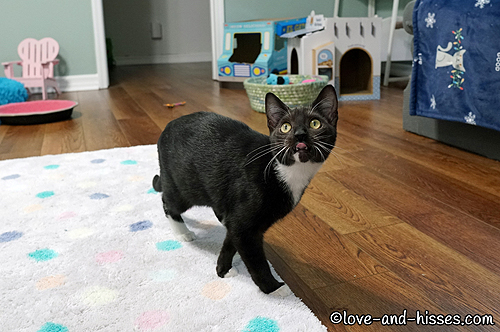 Nacho’s so intense when the feather teaser comes out. 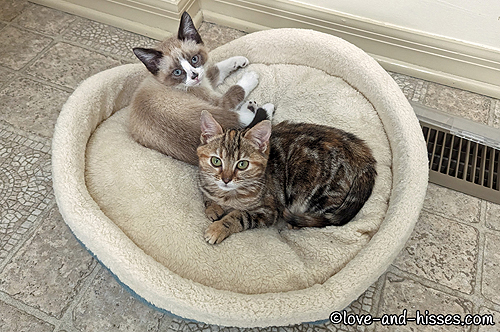 Cinnaspin and Linzer got their first vaccinations Wednesday evening, so they were very quiet and sleepy most of the day yesterday. 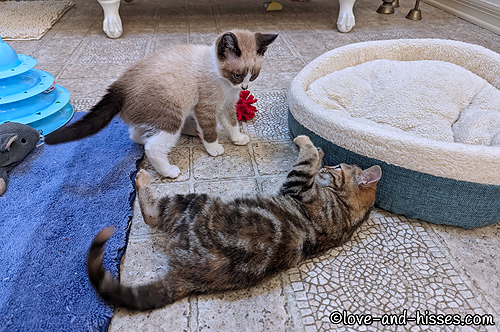 But then they rallied and played some. 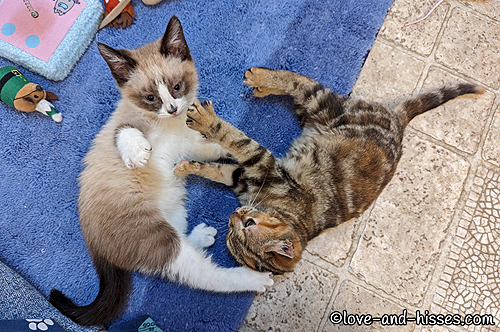 I think Linzer had the upper paw here. 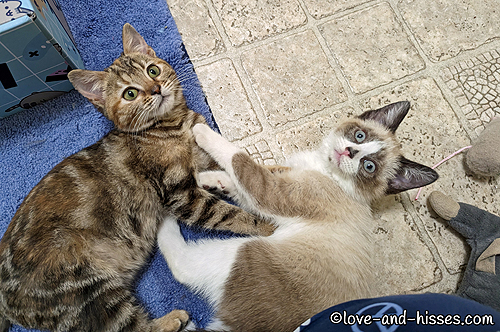 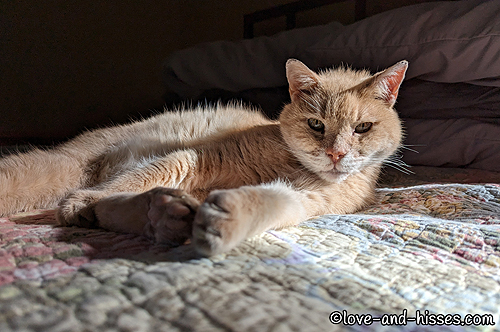 Nap time for Newt (and I still cannot believe that boy is going to be 18 this year. That’s just nuts to me. I remember when he showed up with Maxi back in 2006, not much more than a kitten!) 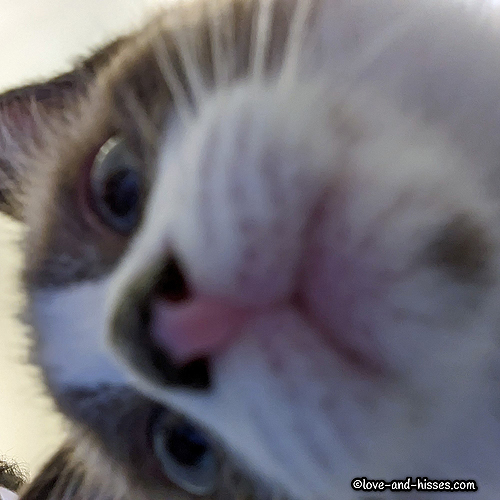 “Hi innernets! It’s me, Linny. The lady says I need to work on my selfie skills, but I think I did okay!” 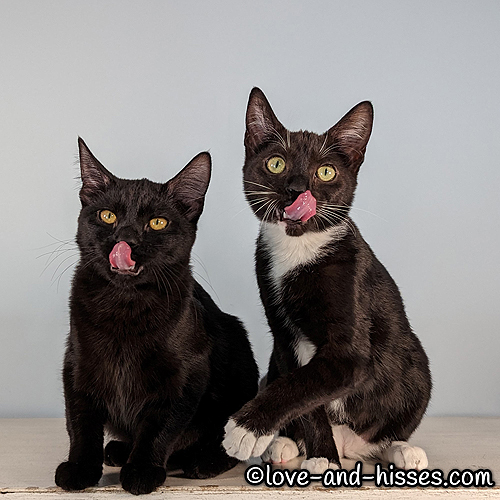 It’s Thlurrrpsday, and Francesca (left) and Nacho are showing off their skills.

YouTube link
Wild times in the kitten room. Okay, not so wild: Nacho talking to the ceiling and tussling with Francesca while mama just ignores them. 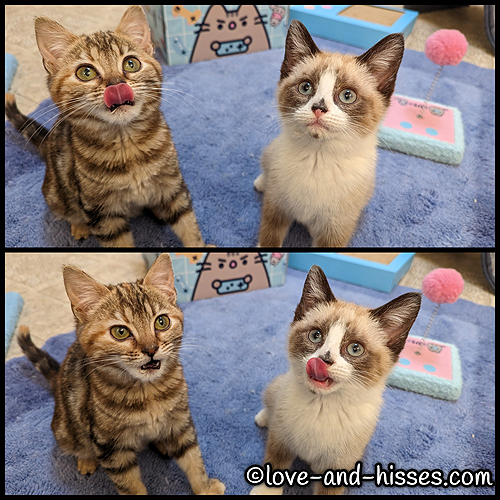 These girls (Cinnaspin on the left, Linzer on the right) need to learn to synchronize their thlurrrps.

YouTube link
Oh, that Linny – she started out as a scaredy cat (and even now is a bit skittish if I reach for her), but she is just a total lapkitten now. What a lovebug! 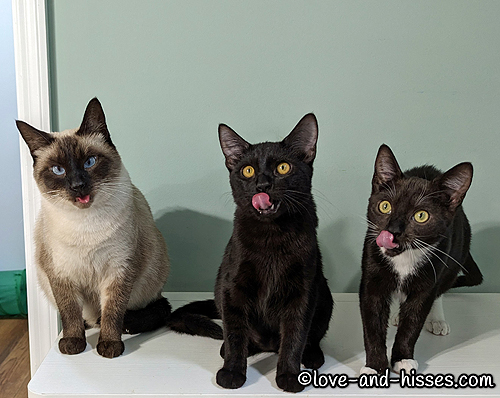 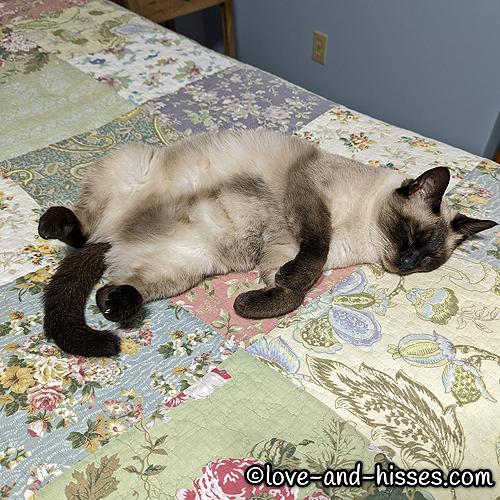