I finally opened the door at the top of the stairs Tuesday evening and let the kittens explore. 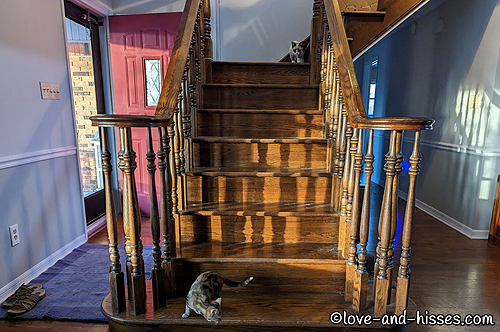 (Side note: Those stairs badly need to be Swiffered. I’m just pointing it out so that YOU know that I know and also I will get around to it when I feel like it, which is to say: not any time soon.) 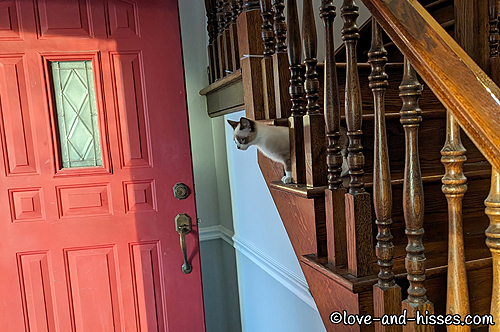 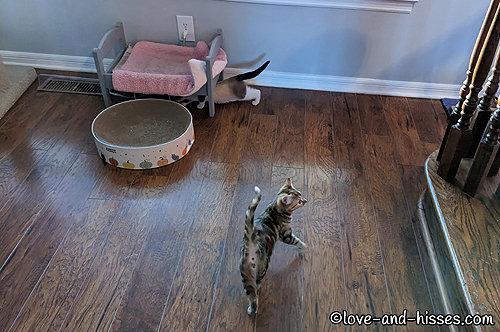 All kinds of cool stuff down here! (I love that Cinna’s tail is straight up as she explores.) 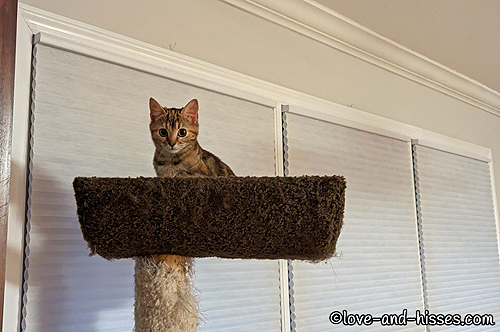 Cinna made it to the very top of the tree in no time flat. 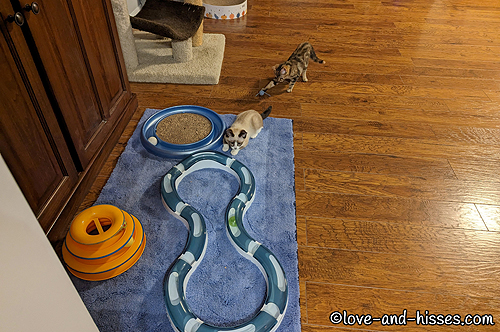 Linzer found what I call “Khal’s play corner” – a rug with 3 different track toys, because Khal loves himself a track toy (and so does Linzer!) Cinnaspin found a random toy and thought it was very cool.

The permanent residents ignored the kittens, and the kittens had such a blast exploring that I said “I don’t see any reason they shouldn’t be allowed out in the house during the day,” and Fred agreed. 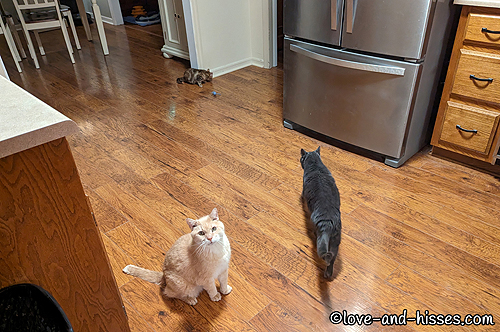 Cinna played with that toy in a corner of the kitchen, while Newt and Jake waited for Second Breakfast. 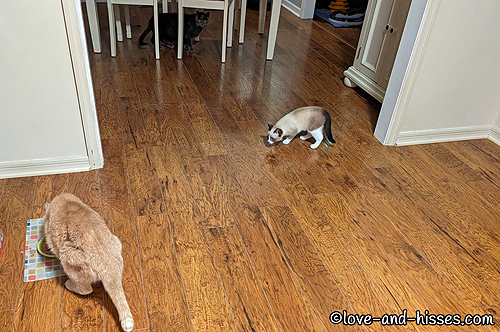 And then Linzer eyeballed Newt’s breakfast while sniffing the toy Cinna had found.

It went great – until I saw Cinna sniffing at the cat door to the screened porch. It usually takes a couple of weeks for kittens to even realize that cat door is there – which maybe makes Cinna a prodigy – and all I could imagine was her figuring out how to get onto the screened porch and from there to get into the back yard. She is so small that I think she could squeeze through the fence if she really wanted to, and I’m not willing to take that chance. So I put the girls back upstairs and shut the door at the top of the stairs. (I expected them to protest, but they just shrugged and went off to take a nap.)

For now, they’ll get to explore in the evening (after the cat door from the screened porch to the back yard is closed) and probably for a little while in the morning as well, as long as I’m there to keep a close eye on them. 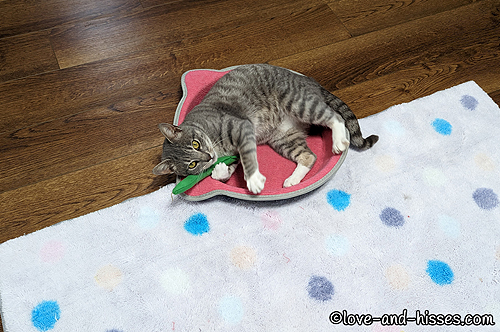 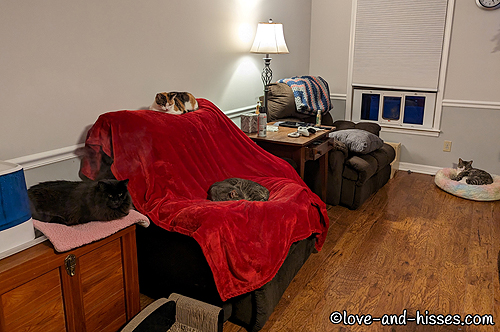 The permanent residents are grumpy about the gray, dismal, rainy day out there and prefer to nap inside, thank you.

On the pink bed (left side of the pic) – Khal. On the back of the recliner with the red blanket – Alice. On the seat of the chair – Archie. In the floofy bed on the right side of the pic – Charlie.

YouTube link
The important stuff:
*She is not pregnant (I thought she might be; she is not. She is, in fact, currently in heat.)
*She’s about 18 months old.
*She came from the same area where Cinnaspin was found. In fact, she is believed to be Cinnaspin’s mother (when I first introduced Cinnaspin, I said that her siblings and mother had been killed by stray dogs; it was just her siblings, I was assuming that her mother had been killed as well, but I was wrong)
*She’s going for her spay surgery next Thursday (January 26th) and will be available for adoption after that.
*Email Forgotten Felines of Huntsville at info (at) ffhsv.org to inquire about adopting her (we are located in Huntsville, Alabama and adopters must come here to complete the adoption.) 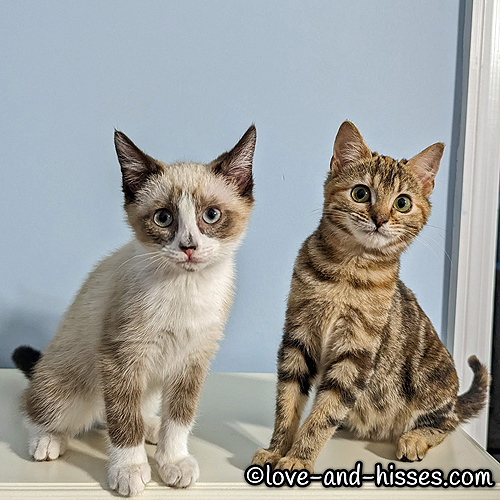 Linzer (left) and Cinnaspin are going for their spay surgeries next Thursday – January 26th. This means that Forgotten Felines of Huntsville is now accepting applications for them. ⁠

*They are A BONDED PAIR AND MUST BE ADOPTED TOGETHER.⁠
⁠
*We are located in Huntsville, Alabama, and adopters must come here to complete the adoption. Transport is not allowed.⁠
⁠
*EMAIL FORGOTTEN FELINES OF HUNTSVILLE AT INFO (at) FFHSV.ORG TO INQUIRE. 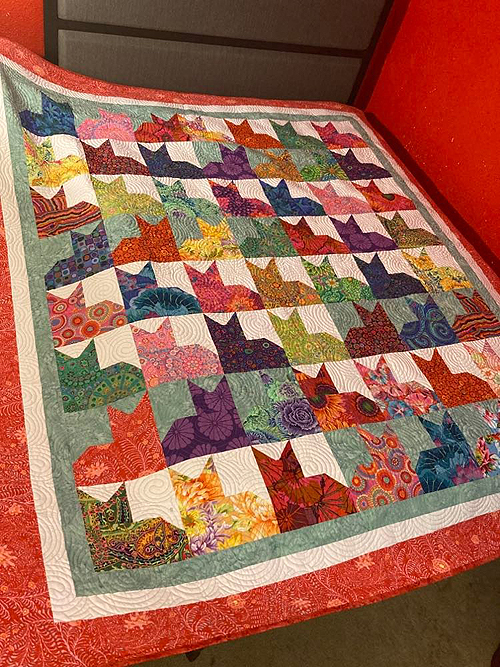 You can enter as many times as you like, for $5 per entry. There’ll be a live drawing Saturday around 7:15 (Central Time) from the foster room (hopefully I can get Linzer and Cinnaspin to help out).

To enter: Check out the auction page or just send $5 per entry to forgottenfelineshsv@yahoo.com and note “QUILT.” You can enter RIGHT NOW through Saturday at 7 PM (Central Time.) Saturday evening (7:15ish) we’ll draw a winner live. You DO NOT have to live locally or even in the US – we’ll ship the quilt to the winner (at no cost to the winner) anywhere in the world.

All proceeds benefit the Forgotten Felines of Huntsville Spay/Neuter fund. 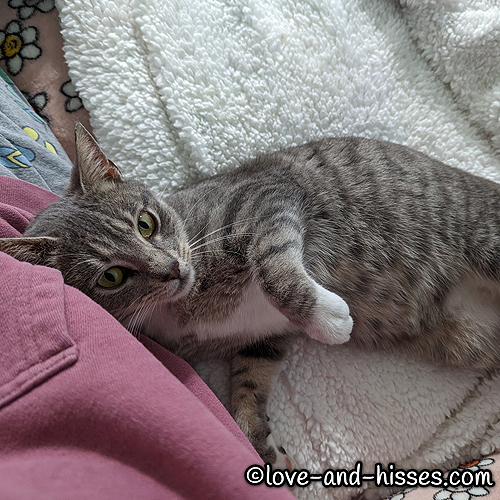 Brioche is a pretty, pretty girl.

YouTube link
They – especially Linzer – are still enjoying that track toy! In case you wondered.⁠
⁠ 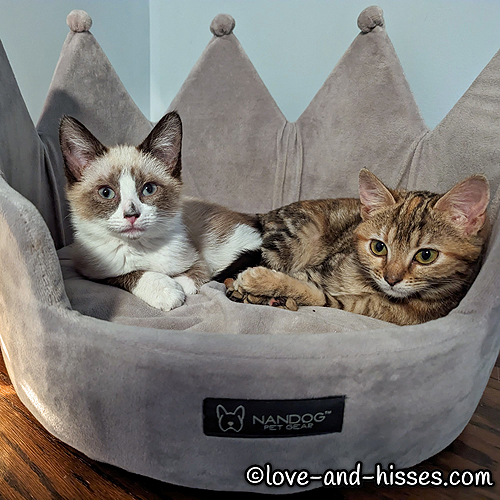