Oh, you guys. I know, I know you want us to keep the three remaining Bookworms here, believe me I know it. But it’s not going to happen because we’re at our limit. If it was just a matter of keeping one of them, that would be one thing, but all three? No, we really can’t.

I especially want Rhyme to find a forever home, because he’s such a sweet, friendly boy who loves people, and I’m afraid that he doesn’t get enough attention. That is, I’d like to see him in a home with perhaps a FEW less cats vying for the attention of the humans. Reacher and Corbie are also sweet and friendly, but perhaps not quite as 24-hours-a-day-snuggly as Rhyme is.

I came to the realization that it’s not so much strange people that Reacher has a problem with as it is strange situations. Once he had a few minutes with the strangers on Sunday, he did relax, and he liked being petted and held. I think that being at the adoption center, with strange people coming and going all the time, is not something he could handle. Or maybe he could handle it, given enough time, but I know that he’d been at the adoption center for at least a few days when the day came that Lisa was doing adoptions and held him for a long time, and he shook and hid his head the entire time.

I actually think that Corbie will be okay at the adoption center, because he’s the kind of cat who takes his cues from the cats around him. Rhyme was perfectly fine for the time he was at the adoption center with Buster, and it was only because we were out running errands and I wanted to stop by and see them that we ended up bringing them home. (Fred can’t stand to see cats in cages, especially the ones we foster. Which is why he’s never the one to take them to Petsmart!)

I dropped the Bradys off at Petsmart yesterday morning, early. I don’t know that they could have been less scared or worried. There were a few tentative meows on the way, but no terrified howling. When we got into the cat room, I let them out to run around, and they explored the cat room, sniffed at the other cats, ran around some more, climbed the scratching post, drank some water, ate a little food, and ran around even more. When I was done getting their cages ready, they were all in one cage already, checking it out. I put Cindy and Jan in a small cage together (since they’re the two smallest), left the other four in the big cage, and shut the doors.

They just kept on playing, barely even noticed me when I left.

I went back by Petsmart two hours later and peeked around the corner at them, and they were perfectly fine. Not scared in the slightest, just hanging out, doing their thing. Cindy was very interested in watching people walk by, and Marcia was stretched across the big cage, grabbing the legs of her brothers as they went by. I really like it when kittens react so well to being at the adoption center -but jeez, Bradys. You could miss me a LITTLE, you know!

(PS: Marcia and Cindy were adopted last night! Not together, but that’s okay – I have a feeling those two will be just fine!)

There seems to be some sort of theme in the pictures I’m posting today, but I can’t quite put my finger on what it is… 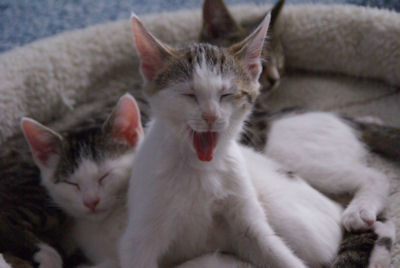 Good lord, if Jan developed the muscle control to flap those things, she could circle the Earth in no time flat. 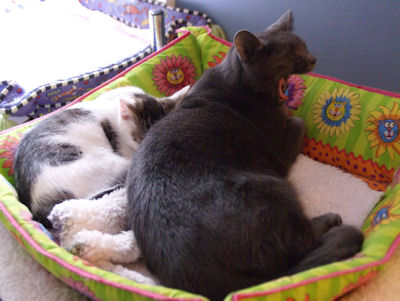 “Waiter! There appears to be a kitten in my bed!” 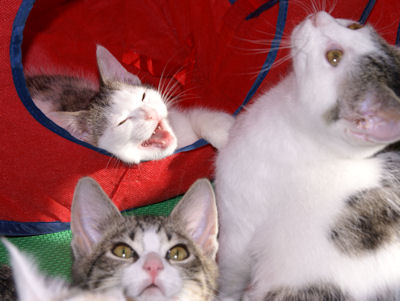 Cindy: ::weak with laughter::
Greg: “I don’t get it.”
Bobby: ::looking to the heavens for help:: “Okay, Bobby, tell it ONE MORE TIME, maybe Greg will get it THIS time.” 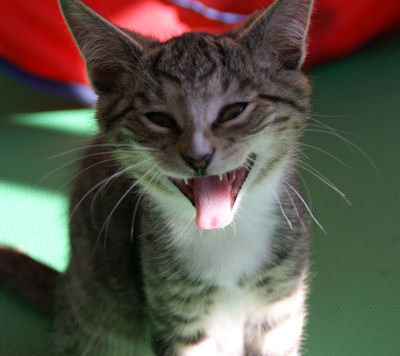 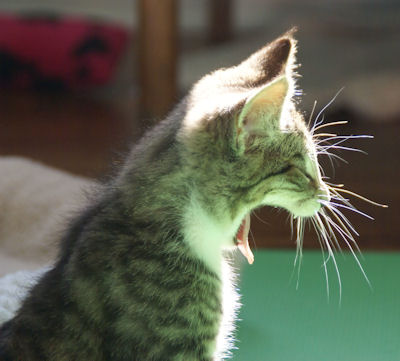 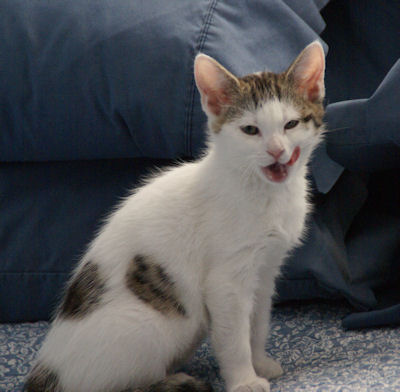 “He never was the brightest bulb.” 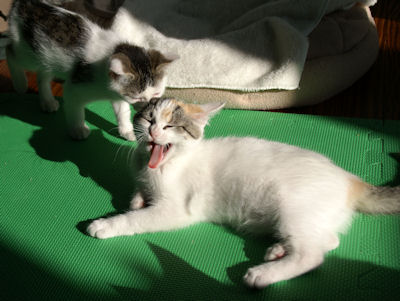 “Hey, quit! That tickles! I’m still trying to figure out what a “stick” is…” 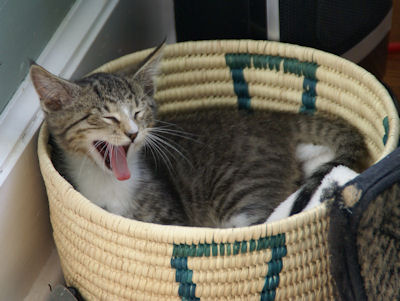 “The basket is mine! THE BASKET IS MINE! Mine, mine, mine, and no one else can have it, ’cause I’m the best joke-teller EVER!” 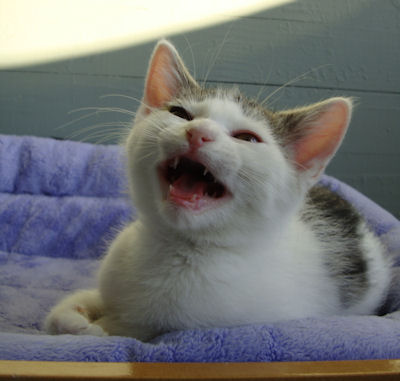 “And the bed is too soft, and sometimes Marcia makes me share it with her, and it’s purple and I don’t like purple and I don’t know why you treat me so horribly, I don’t require much, I’m just a poor sweet bebbeh, and ALL I WANT IS WHAT I WANT.” 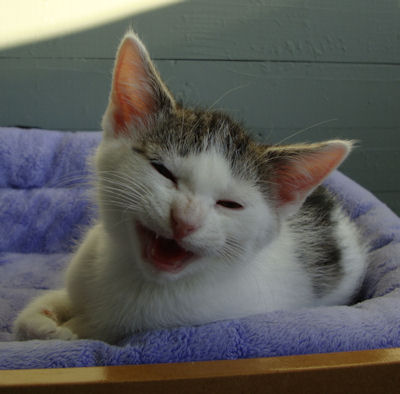 “That’s all I want, to be treated decently, DO YOU HEAR ME?” 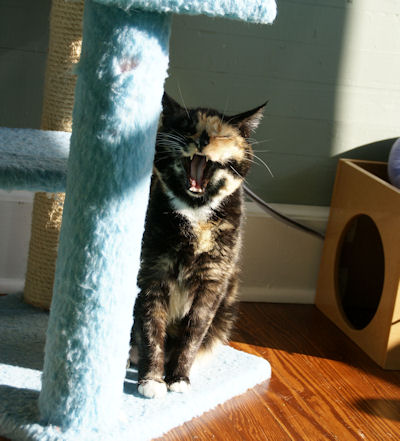 “If ONE more kitten comes and tries to convince me that that joke is funny, I WILL BEGIN THE SMACKIN’ AND IT WON’T BE PRETTY.” 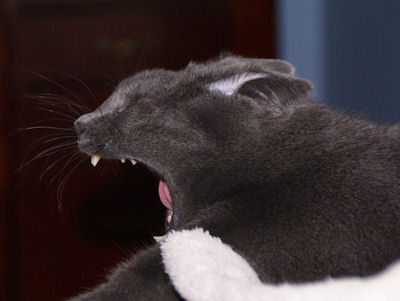 “All y’all, hush UP! Loony Jake needs his sleep!”