A really nice couple came to the house on Sunday to meet the three remaining Bookworms. They liked Corbett, and then when they found out that he had two brothers, they thought they might want to adopt two of them. I talked to them briefly on the phone, and then invited them to come on out to the house.

I put the boys in the upstairs foster room, and they were immediately suspicious and wanted right back out of that room. They sat at the door and put their arms under the door and tried to stick their faces under the door. I distracted them by giving them some canned cat food, and then slipped out of the room.

When the nice couple showed up, we took them upstairs to meet the boys, and I tell you what – it was embarrassing, how many cats went scattering as we walked through the house. The Bradys – who were given the run of the house during the day starting Friday – went running in all directions, Sugarbutt and Spanky went flying in another. I felt like I was maybe in an episode of Hoarders and perhaps Dr. Robin “Crazy Eyes” Zasio and Cranky Matt the organizer were going to be knocking on the door at any moment.

The boys were freaked out by the strangers and clustered around the door trying to get out, but they eventually relaxed and allowed themselves to be picked up and petted. I was actually surprised that Reacher didn’t freak out more than he did. After they left, Reacher and Rhyme eventually came slinking downstairs, and for a while we couldn’t find Corbie, then I found him under the couch. He came out shortly after and resumed sleeping on my desk, where he’d been before I snatched him up and locked him in the foster room.

Though I really liked the couple who’d come to meet the boys and they really liked the Bookworms, it unfortunately didn’t work out, which was disappointing. It doesn’t always work out, that’s just the way it goes. Just wasn’t meant to be, I think.

I did decide, though, to ask the shelter manager to put Rhyme and Corbie in the queue to go to the adoption center when there’s room. It won’t be soon – there are other cats ahead of them, including the Bradys – but I would really like to give them a decent shot at being adopted. I’d like to send Reacher, too, but he was so scared the last time he went that I can’t bring myself to put him through that again. I’m going to keep my fingers crossed that someone sees his picture on Petfinder or in the book in the adoption center and falls in love with him the way it happened for Buster. 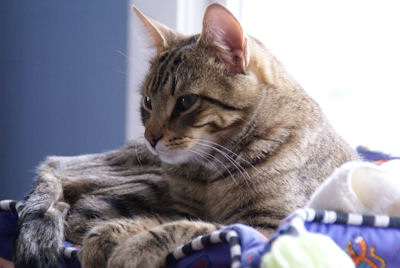 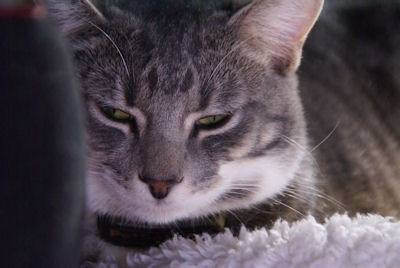 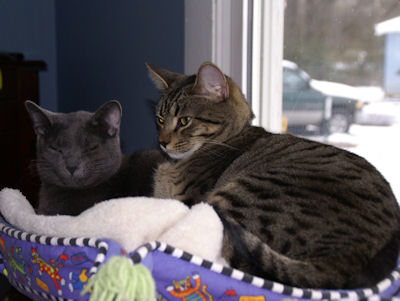 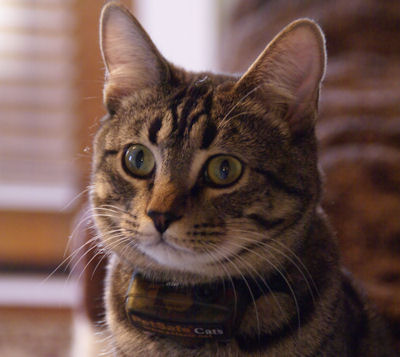 Rhyme again. Don’t the Bookworms have the prettiest eyes? I could look at ’em all day long.

I’ll be leaving here in a little while to take the Bradys to the adoption center. The six of them will be going, but Alice will be staying with us for a bit longer. She’s got some sort of congestion issue, so we need to get that cleared up before she’s ready to go. She was going to be going into a cage by herself, anyway – she gets along okay with the little ones, but if they get in her space for too long, she loses patience with them – so it won’t be a problem for her to wait a while.

Having the Bradys run around the house during the day this weekend was pretty fun. They really liked the toys scattered throughout the house, and when they got tired, they’d pile up on one of the couches. I walked into the front room Friday evening while Fred was playing some game or another on the Xbox, and they were all laying on him in various stages of drowsiness.

The big cats have been very patient with the little ones, and as it turns out Jan Brady is a bit of a hussy. Saturday morning she climbed into a cat bed with Jake and kneaded on him for about 20 minutes before he got tired of it and stomped off. And then she climbed into the cat bed where Reacher was sleeping, and found a somewhat more receptive audience. 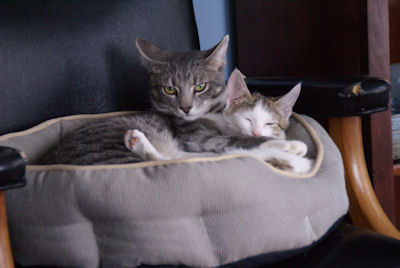 “That is correct. We are snuggling. What of it?” 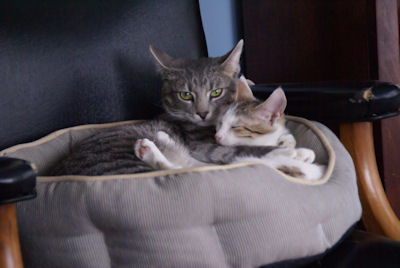 “The young ladies have always had a particular liking for the Reacher Creature.” 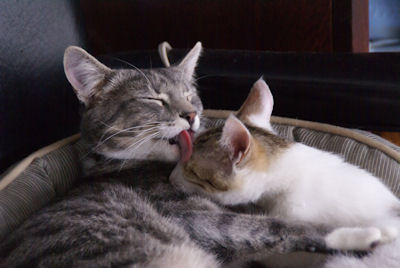 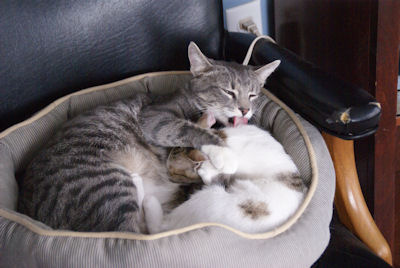 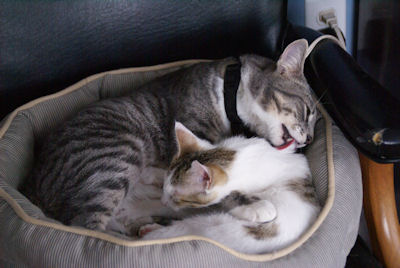 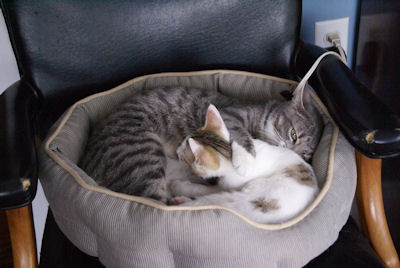 “Okay, little miss. Stop kneading on my belly and let’s take a nap.”

Okay, off I go with the Bradys. Don’t worry – you’ll be seeing pictures of them for at least the rest of the week. I still have a ton to share with you!

Keep your fingers crossed that these little monkeys get adopted quickly. I suspect they will! 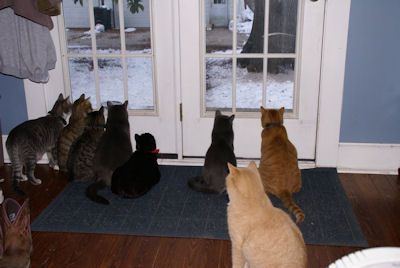 Eight cats in one picture! From left: Reacher, Corbie, Rhyme, Elwood, Tommy, Jake, Sugarbutt, and (closest to the camera) Newt, keeping an eye on the birds.