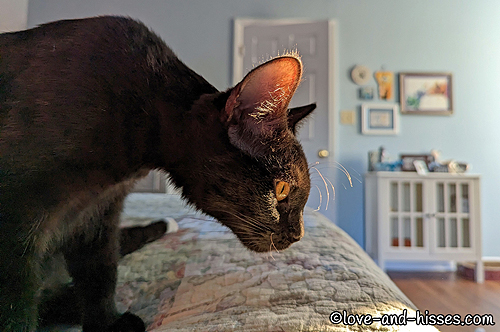 Francesca in the sun. So, so pretty. 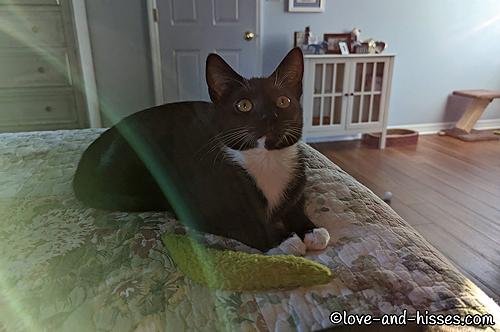 A Nacho and her green bean. 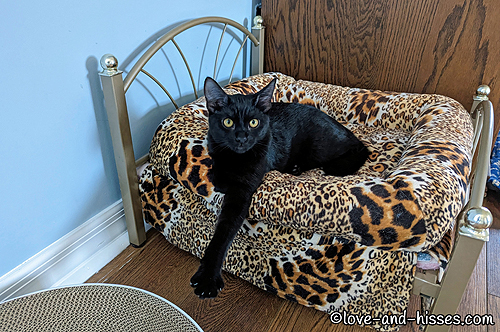 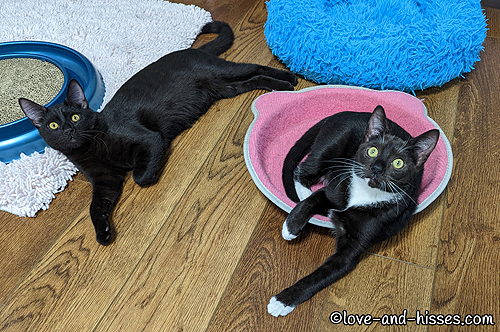 Now that Kim has been adopted and gone home, it’s become obvious that Francesca and Nacho are a bonded pair. As such, they will not be separated, and have to be adopted together.

You might ask: how do you know they’re a bonded pair? They’ve always (especially as their siblings left) snuggled up together, but I figured that was just because they were the last kittens and only had each other to play with. But then on Monday Fred had Nacho in his office for an hour or so, and he reported that she didn’t stop howling for one minute. As soon as the two girls were put back together, they curled up together, groomed each other, and then napped together. It seems pretty obvious that they’ve bonded. Even when they’re not curled up together, they always know where the other one is (and if they aren’t sure, they go looking.)

Will they still go to Petsmart? Yes. Unless someone seriously expresses interest at some point today, they are headed off to Petsmart tomorrow morning. They’ve been available for adoption for 2 months now, and it’s clear they aren’t going to be adopted from here. They need to go where more people will see them. 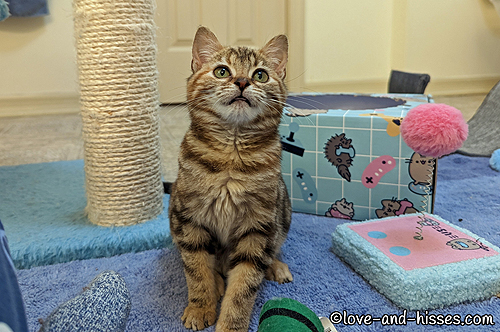 Cinnaspin’s all “Is it Churu time yet?” 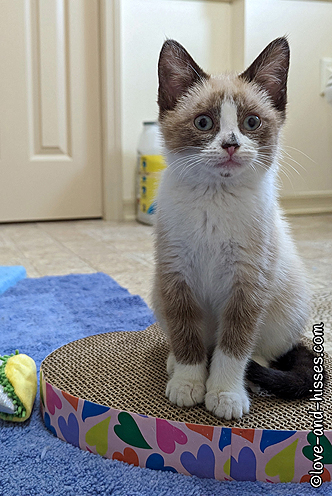 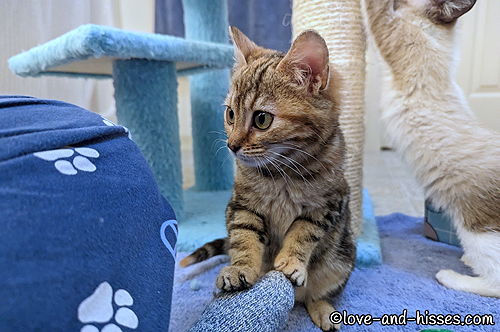 Cinnaspin with her tiny paws on my foot. She likes my socks. 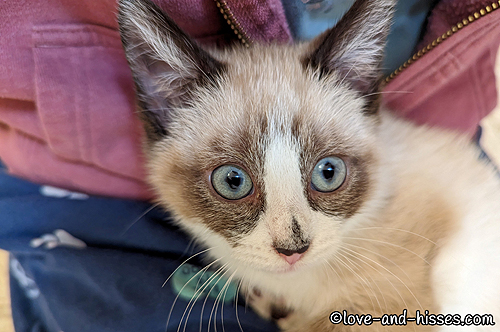 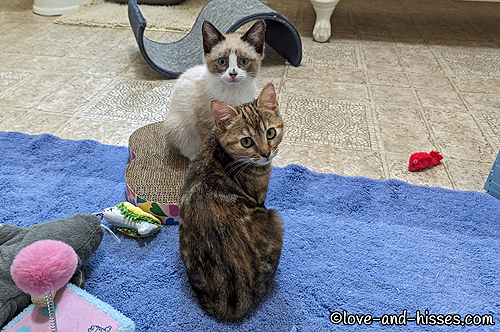 “Yes, lady. We are talking about YOU.”

Late yesterday, I moved Cinnaspin and Linzer – and all their toys and the little blue tree – to my office. I left them closed in there for a couple of hours, and they sniffed at Nacho and Francesca under the door. Everyone hissed at everyone, and then everyone wandered off to take a nap. Then I opened the door, expecting floof suits galore.

There were zero floof suits, and I don’t mind telling you that I’m more than a little disappointed. I left them all out for a couple of hours, and for the most part the little kittens would venture out for a quick look around, and then go back to my office. At one point Linzer actually made it all the way to the door of the foster room before running back. Nacho hissed at the little ones and Francesca stared at them, but there was no real interaction. They’ll have all day today to interact, and I hope they do! (Cinnaspin and Linzer spent last night in my office, and Nacho and Francesca spent the night in the foster room.) 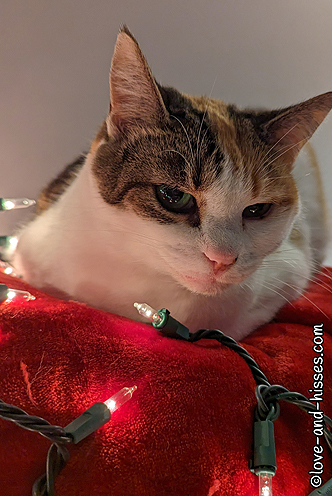 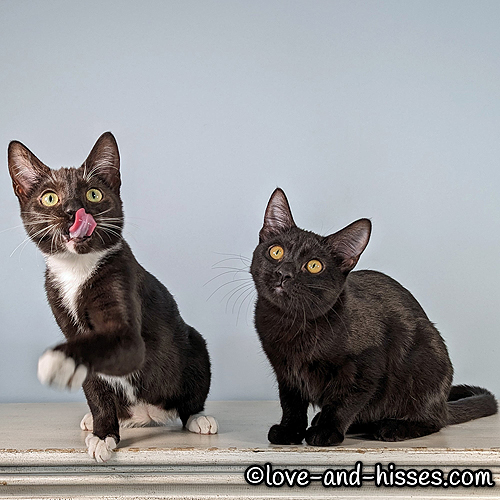 Now that mama Kim Wexler has been adopted and gone home, it’s become even more apparent that sisters Nacho (left) and Francesca are a bonded pair and must be adopted together. If these sweet sisters seem like your kinda gals, EMAIL Forgotten Felines of Huntsville at info (at) ffhsv.org to inquire. (Out of area adoptions are allowed – Kim went to Massachusetts! – but adopters must be willing to come here to complete the adoption.) 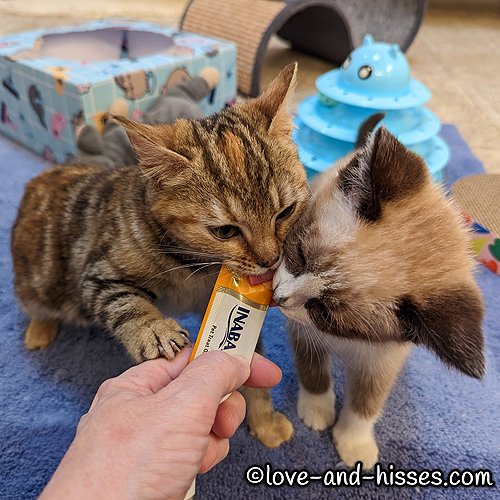 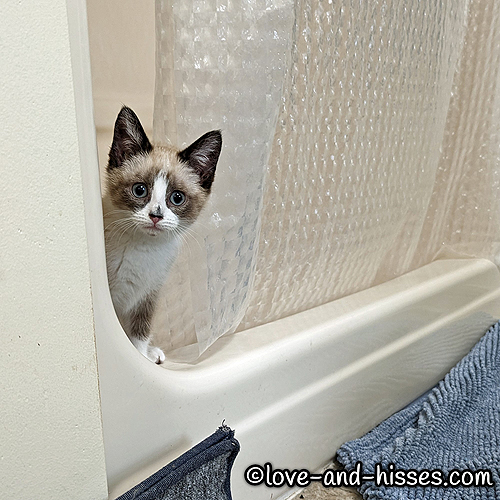 Linzer’s all “Oh my GOODNESS, you are so RUDE, can’t a girl get some PRIVACY in the shower?!”

YouTube link
The Cookie girls get their purrrr on. They’re sleepy and ready to nap and are wondering why I’m all up in their space. 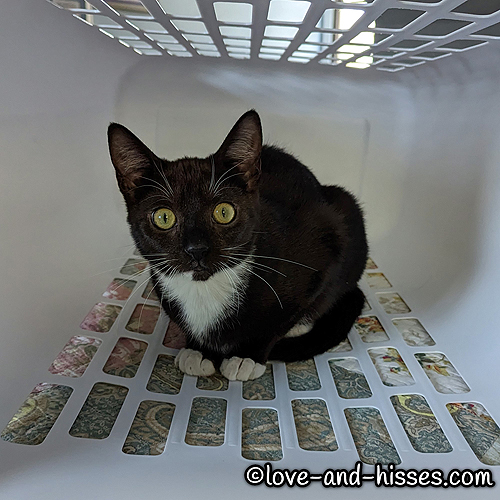 Nacho doesn’t do laundry, but she keeps the laundry basket safe, and y’know? That’s a pretty important service! 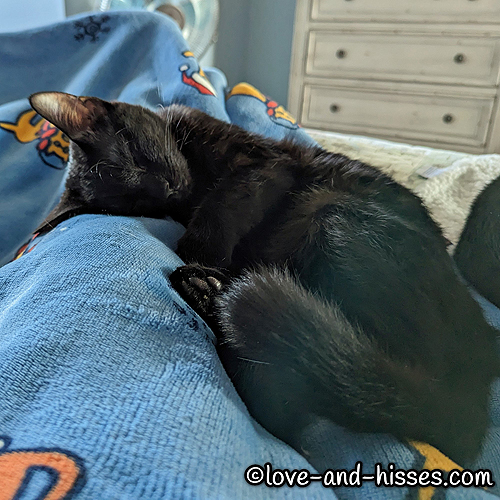