In case you missed it on social media yesterday, Kim Wexler has gone home! She is now a resident of Massachusetts and has two kitty siblings, two human siblings, and a doggy sibling.

Jess, who adopted Kim, flew from Boston to Nashville. I drove Kim to Nashville (it’s a little less than 2 hours from here to Nashville), met up with Jess at the airport, and then Jess and Kim flew back to Boston. That’s a long day, and I am very grateful to Jess for being willing to make the trip!

When I first got Kim back in August, she didn’t deal well with traveling in the car. In fact, when I took her to be spayed she reacted so poorly that she had to have a bath before she could have surgery. With each trip she improved a little, but I was still worried that she’d freak out on the drive to Nashville. So I set up a crate in the back seat of my car – a big enough crate for a litter box and a bed – and beginning 10 days ago I got up every morning, put Kim in a carrier, took her out to my car, transferred her to the crate (inside the car with the doors closed), and then drove around for an hour.

Yeah, it’s a lot of work and it wasn’t a lot of fun – honestly kind of boring, and Kim had opinions on my singing voice – but you know what? By day 3 she’d figured out how to use the litter box in a moving car and she was even napping a little. I kept it up, and by yesterday morning she was just shrugging when I’d put her in the crate. There was a point during the drive to Nashville that she registered her displeasure LOUDLY, like “Excuse me, this is MORE time than we’d agreed upon and also please stop singing!”, but then she settled back down. Not to pat myself on the back too much, but that was a really good idea I had!

I was worried how she’d do being in the airport, but she handled it well – very quiet, but curious. She’s a really good girl, and according to Jess she was an absolute angel on the plane ride (and I am not surprised!)

So the scoop is that she is now HOME. Her name will likely remain Kim, and you can follow her on Instagram, right here! (I really need to start a list of all the former fosters with social media pages!)

Today’s post includes the last of my pictures of Kim. 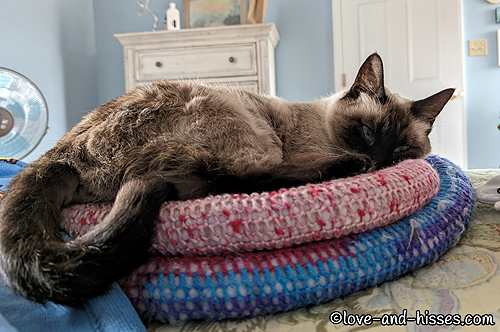 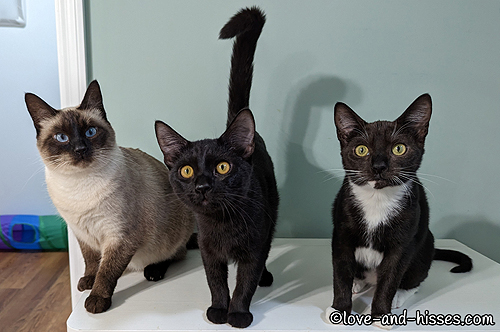 One last lineup with the girls. 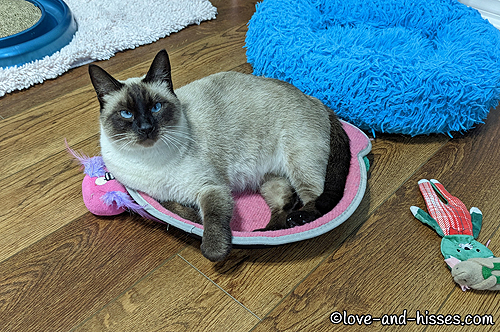 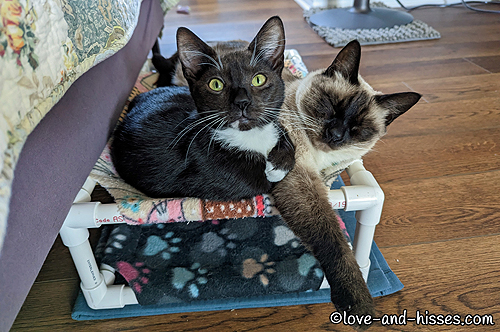 Nacho and her mama. 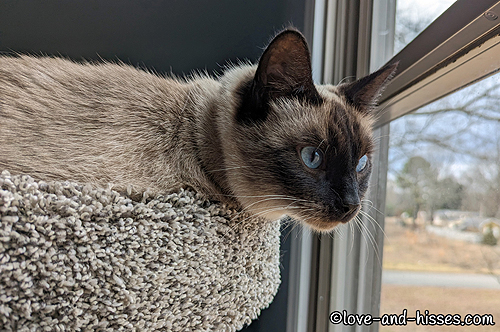 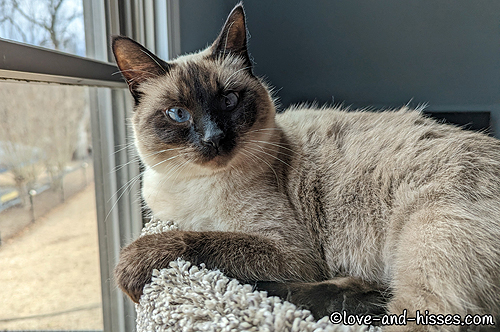 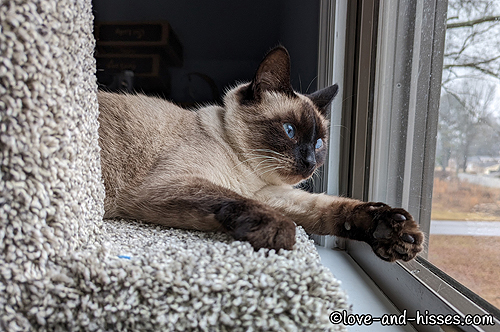 Francesca and Nacho are doing well – lots of playing and snuggling. They seem to notice something is different, but maybe can’t quite figure out what. They always take it in stride a lot better than you’d expect. 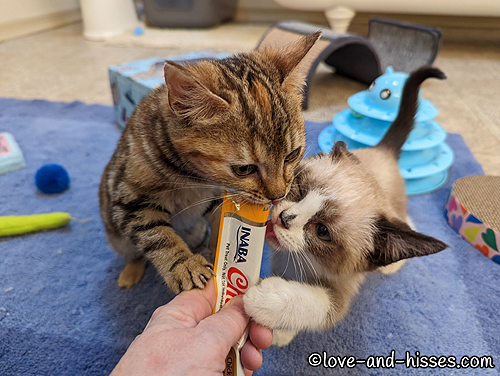 You could say that Cinnaspin and Linzer are fans of the Churu. 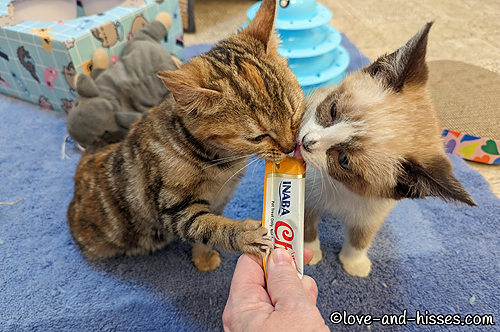 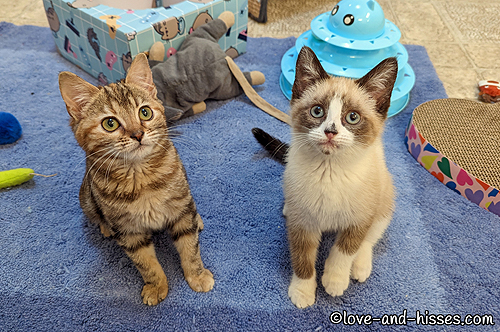 If you look closely, you’ll see a blop of Churu in the corner of Linzer’s mouth. She’s saving that for later. 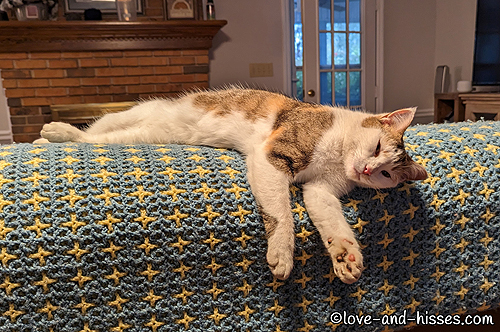 I SUPPOSE if Fred’s going to continue to let Trixie (the cat who belongs to a neighbor) in the house, I should set up a spot for her in the permanent resident roster in the daily posts. She can share the spot with Rocco (the other cat who lives on our front porch 75% of the time). (Did you know that I have a calendar with each permanent resident’s name so that they all get the same amount of exposure? So if, say, you think it’s been an inordinately long time since you’ve seen a picture of Charlie or one of the other permanent residents, you must have missed them because everyone gets a turn!) 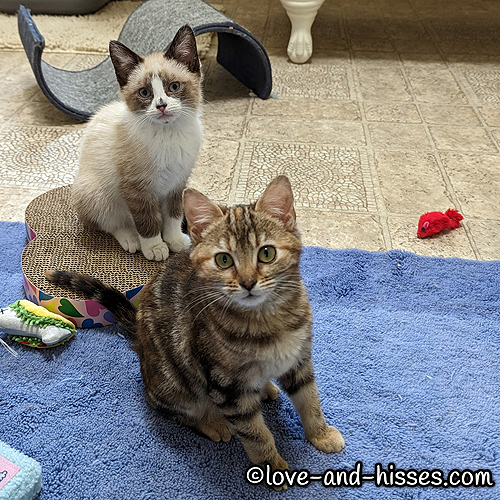 It’s a little early for this much attitude, girls. (Linzer, left, and Cinnaspin) 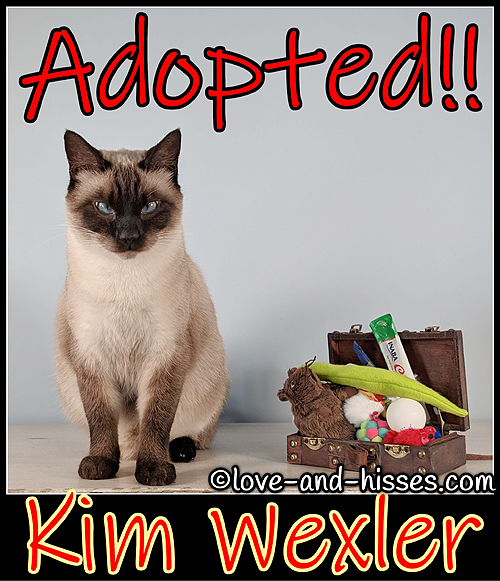 Hooray, hooray, Kim Wexler, mama extraordinaire, was adopted and went home today! She is flying home to Massachusetts right now (with her adopter), where she will join two kitty siblings, two human siblings, and a small dog. Her name will likely remain Kim, and you can see her on Instagram here! 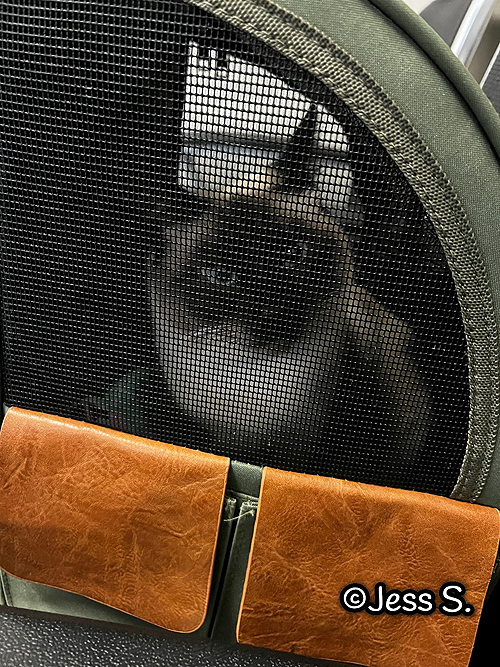 (Kim on the plane, just after they’d boarded.) 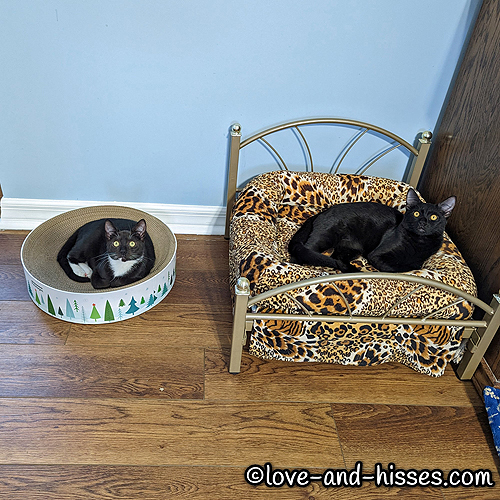 The girls don’t seem to be missing their mother too much – they’re playing, snuggling, and playing some more. They always tend to kind of take it in stride.