Linzer’s markings are very similar to my mother-in-law’s ragdoll cats. Maybe there’s some of that breed in Linzer?

It’s entirely possible! (I wish DNA tests weren’t $100 a pop, because how fun would it be to send off her DNA for testing? Cinnaspin’s too, for that matter!)

While looking at a pic of Francesca, Nacho, and Kim, it occurred to me that “Mama Was a Meezer” would be a good name for a tell-all book.

I would read that book!

Would you share a photo (or size description) of the crate set-up you used in the car with Kim? We would like our 2 cats to get used to longer car rides and are curious how to set it up with a litter box. Thanks for the information!

This is what the setup in my back seat looks like (you do not see that litter scattered on the back seat, no you do not) – 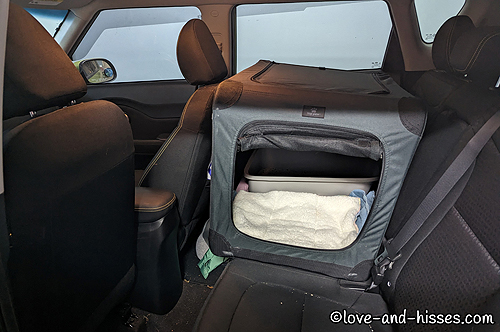 The crate is a Top Paw crate (I got it at Petsmart several years ago), and it’s this one. It measures 30 inches length, 21″ wide, and 21″ high. It fits perfectly in my back seat (I drive a Kia Soul), and it doesn’t block my view. The side facing the front seat has a little bone-shaped mesh “window” so that Kim was able to see me (and more than once I glanced back to see her staring at me through that window.) You can see the litter box I have in there – I wouldn’t ordinarily use a box quite that big, but I thought that the higher sides might be easier for her to balance in. She was able to climb into the litter box, use it, and then climb back out with no issues, and she spent most of the drive to Nashville sitting or curled up on the bed.

The only down side is that there is nowhere to put a bowl of water or food, but honestly – I find that cats tend not to be too interested in eating or drinking during travel. I did offer her some water when we got to the airport, before we headed inside, but she didn’t drink. (In the past – when I traveled with Charles and Caroline to Nashville, and with Margeaux and Katriane to Louisville, and Luc to Nashville – I used a cage set up in the back of the Kia. I think that cats are a bit more comfortable in the crate, maybe because it isn’t quite so exposed, but they can still see what’s going on if they want to.)

I’m having trouble telling from the photos if Linzer’s eyes are very light blue, or if they’ve got some green in them? In today’s photo captioned “Linzer the lap kitten” they look more greenish but who knows if my monitor is calibrated properly?

They are light blue, but depending on the light (when I take the picture) sometimes they have a green cast to them, and sometimes they look more gray.

So, Nacho and Francesca are now at Petsmart. I took them yesterday morning, early, and got them settled in. They were less scared than I expected them to be – in fact, when I arrived at Petsmart after the 45 minute drive, they were stretched out in the carrier, snoozing. Hopefully their people will come along very soon (and of course I’ll keep y’all updated!)

Today’s post contains the last of my pictures of Nacho and Francesca. They are such PRETTY girls. 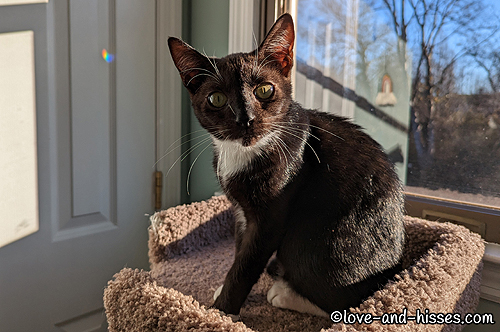 Nacho in the sun. 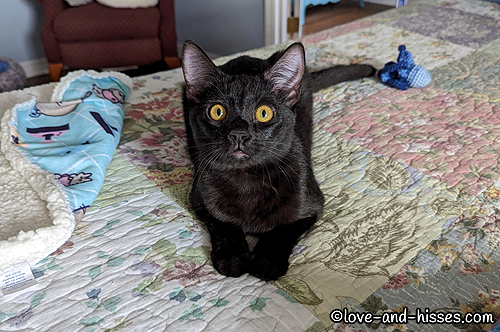 Francesca shows off those pretty eyes. 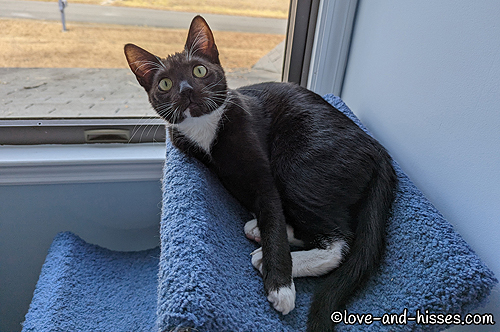 And Nacho shows off HER pretty eyes. 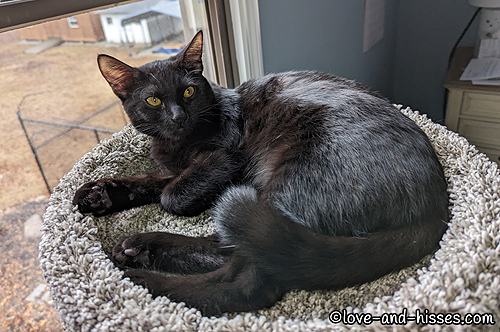 Francesca, keeping an eye on the birds out the window. 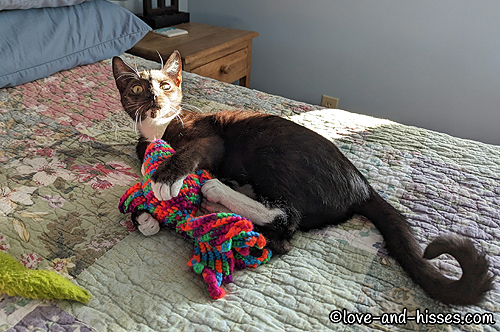 Is it time to bunny-kick a toy? I think it is. 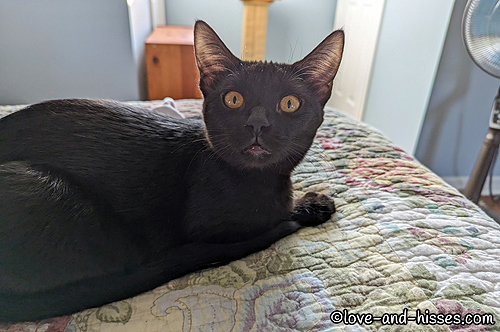 Francesca always looks surprised to see me. “What are YOU doing here?!” 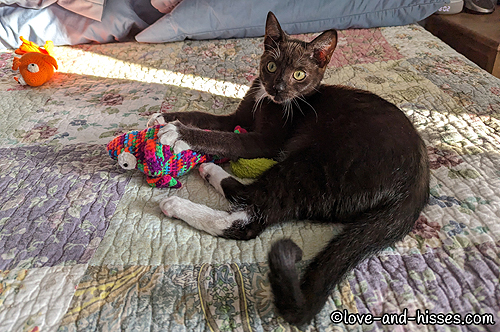 Time to bunny-kick another fish toy! 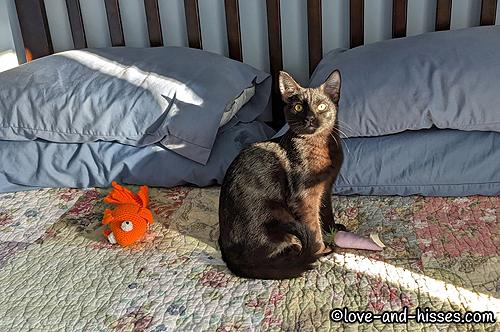 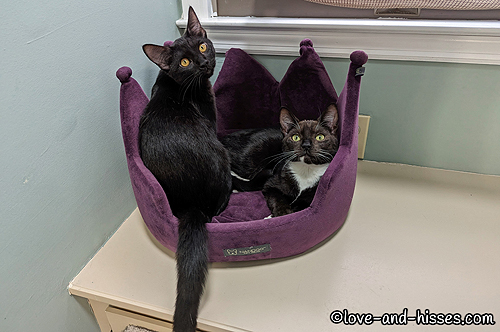 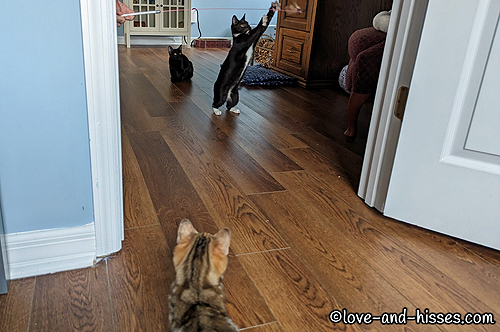 Fred lured them into my room with the feather teaser, and they showed Cinnaspin their jumping skills. 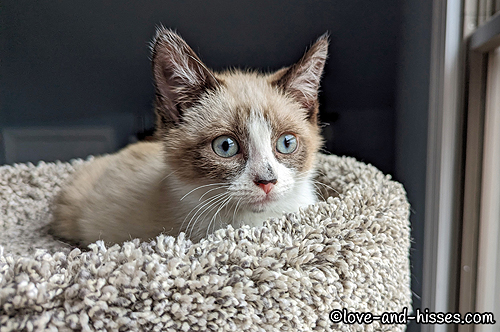 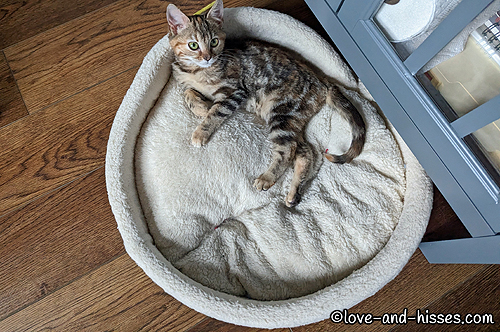 And Cinnaspin’s havin’ a nap.

I started cleaning the foster room yesterday and then got distracted organizing the closet, so still need to finish that up. Cinnaspin and Linzer are having a pretty good time hanging out in my room and office, though, so I don’t guess there’s any rush. 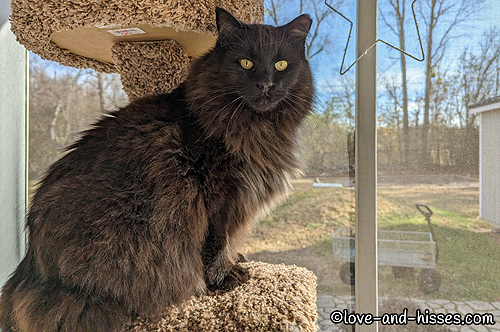 It’s Friday the 13th, so you know what that means: if a magnificent black cat crosses your path, better kiss him! 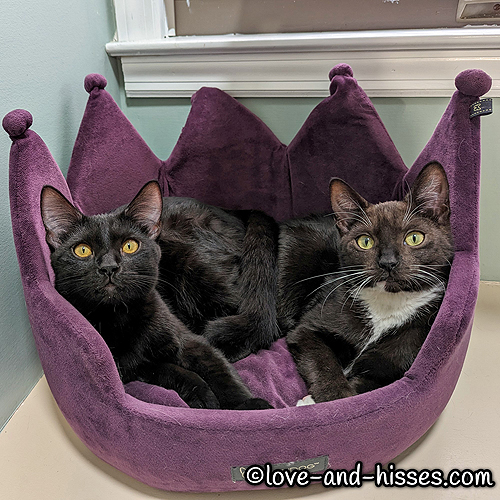 Francesca (left) and Nacho are off to Petsmart (on University Drive here in Huntsville, Alabama) in a few hours.⁠

I guess not everyone realizes this, but Petsmart only houses the cats in the cat room; I am not “giving” Frannie and Nacho to Petsmart so Petsmart can “sell them for a profit” (which someone once suggested.) Francesca and Nacho still belong to Forgotten Felines of Huntsville, and FF provides volunteers to clean the cat room twice a day (and give the cats much-needed love and attention; the volunteers are amazing). FF handles the adoptions, and as a bonded pair these girls will not be split up and can only be adopted out together.⁠

Francesca and Nacho will have a few familiar things with them – a bed, and a few toys – and most importantly, they will have each other. Hopefully their people will come along quickly. In the meantime, I know that they will be well cared for.⁠

I will, of course, keep you updated on them from time to time – especially once they are adopted.⁠ 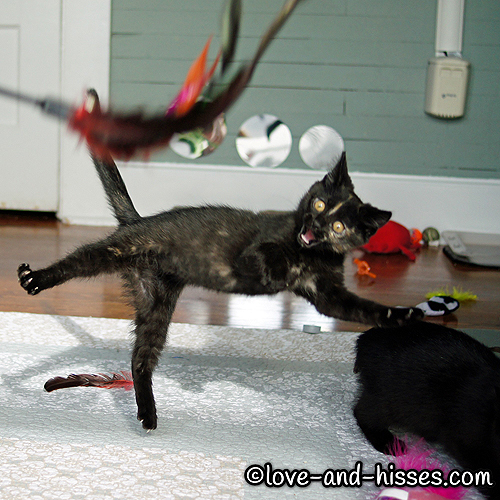 Throw Back Thursday: From 2016, foster kitten Stefani (from the Coaches litter) was crazy for a feather teaser. Her face cracks me UP.

YouTube link
Throw Back Thursday: From 2016, when I was fostering the Coaches litter, I tossed a toy for Levine who did an excellent skitterbug before running back into the closet. (Once at regular speed, once in slow motion.) 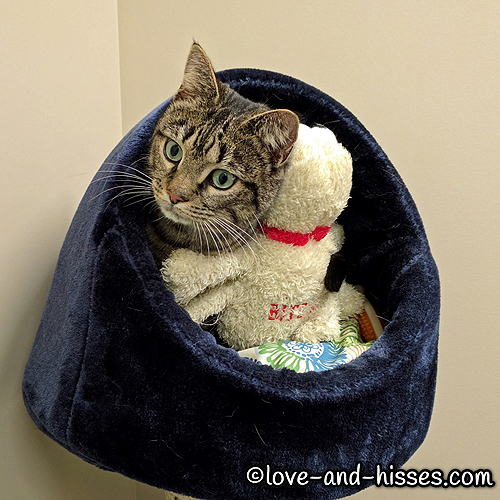 Throw Back Thursday: From 2017, this picture of late permanent resident Dennis (that boy was the BEST) during a visit to the vet is one of my favorites pictures of him. 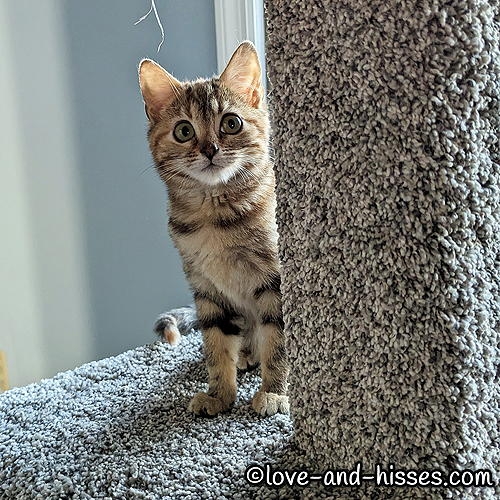 Cinnaspin is all “Watchin’ you, lady.” 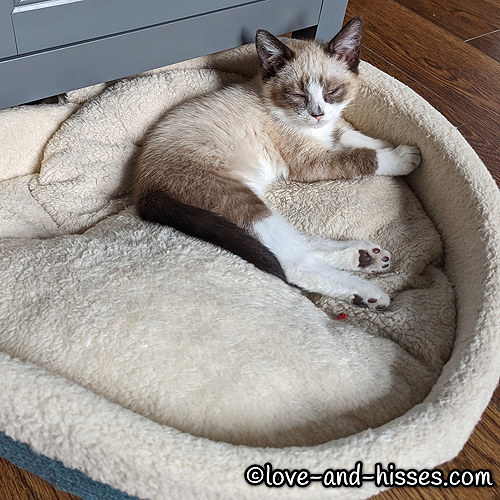