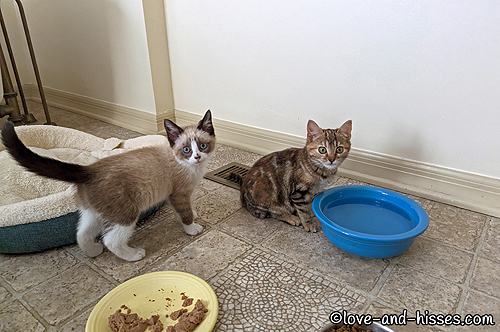 Linzer and Cinnaspin were all “Whattaya mean we’re leaving the bathroom?” 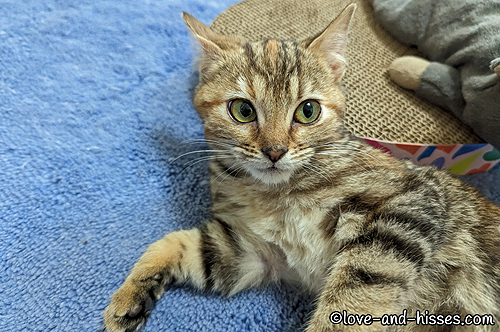 Cinnaspin said “I’m not sure I care for the sound of that.” 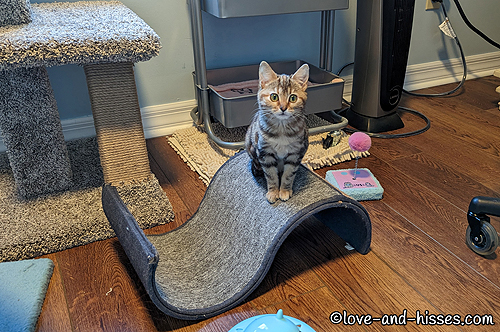 “Oh, okay. I didn’t realize all our cool stuff was coming with us, too. I suppose this is okay.” 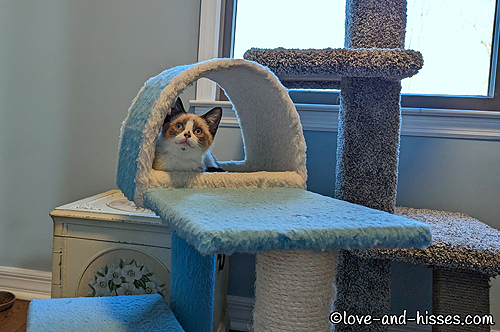 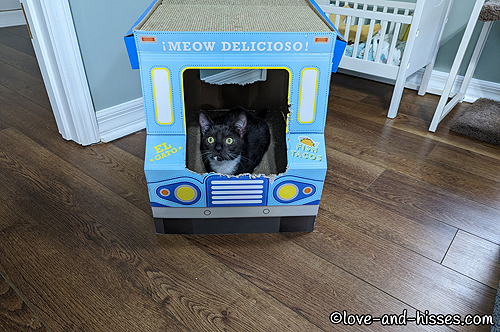 Nacho finished her shift at the taco truck. 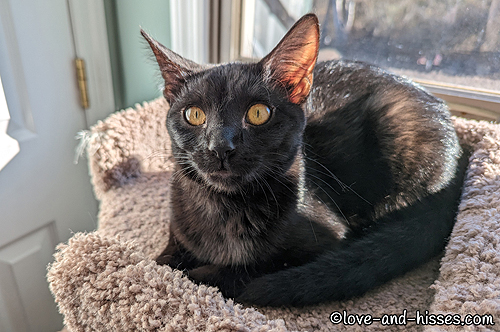 Francesca curled up in the sun. 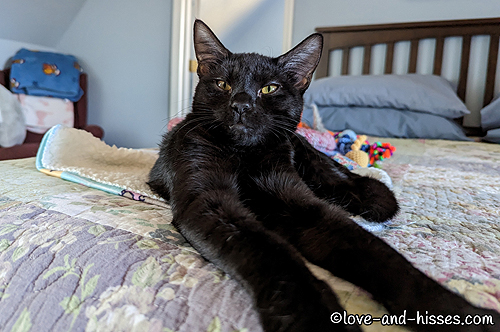 Then moved to my bed to take a nap and show off her long, long legs. 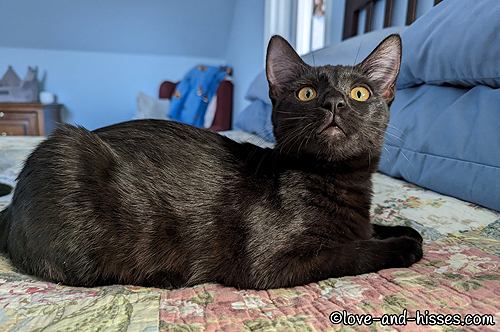 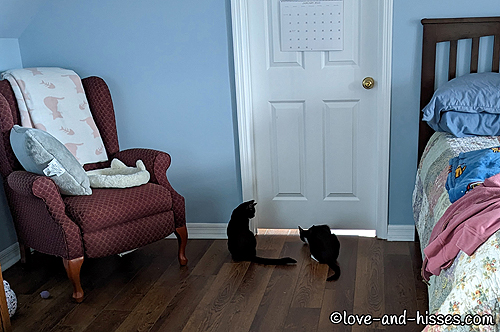 When they realized the door was closed, they were intrigued. There was a lot of sniffing and then hissing. 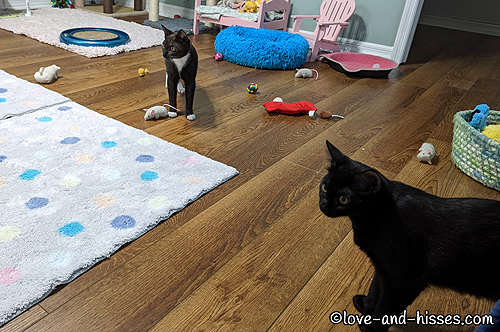 After the door opened and they realized what was behind that door, both Francesca and Nacho retired to the foster room, where they spent all day yesterday. They’d come out occasionally to stare in disbelief at the Cookie Girls, and then go back to the foster room.

I would love to round out this post with a picture of both sets of girls anywhere near each other, but alas.

Nacho and Francesca are headed off to Petsmart later this morning. Not everyone knows this, apparently, but even though they’ll be housed at Petsmart, they still belong to Forgotten Felines. Forgotten Felines handles the cleaning of the room (those wonderful volunteers I always mention) and the adoptions of the cats. We are not “giving” them to Petsmart to “sell for profit,” as one genius has accused. As a bonded pair, they will have to be adopted together; they won’t be split up.

I will send a few of their toys with them, as well as a bed that smells familiar, and of course they’ll have each other. Hopefully their people will have a sudden desire to visit Petsmart and “just look” at the cats, and fall in love. A girl can hope, right?

(I will, of course, keep y’all updated on them.) 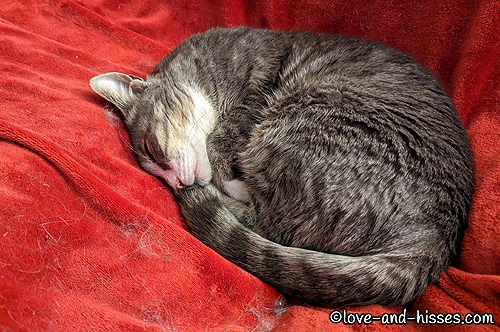 I know that blanket needs cleaning but are YOU going to wake up a peacefully sleeping Archie? Of course not. 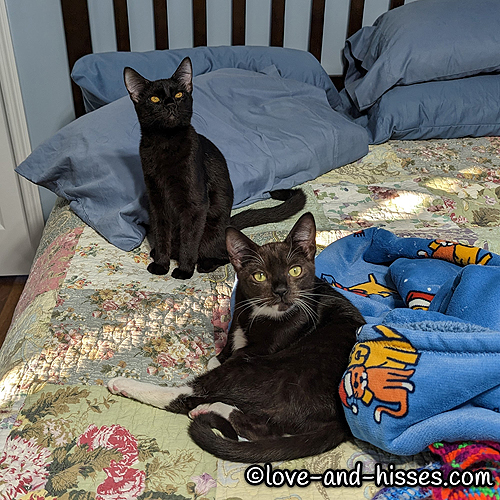 Francesca (back) and Nacho are all “What?”⁠ 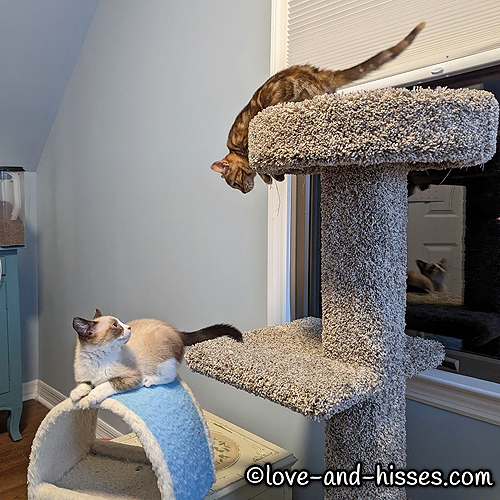 Linzer and Cinnaspin are now hanging out in my office (they have the run of the upstairs during the day), and they think this cat tree is AWESOME. (They have mostly watched Nacho and Francesca from a distance, because Nacho took one look at them and sneered “I HAVE ENOUGH FRIENDS, THANK YOU.” So mean.)

YouTube link
Mama Kim Wexler went home on Monday (to Massachusetts!) and here is the video of some of my favorite pictures of her from the day she came to us (August 1, 2022) to the day she left (January 9, 2023.) 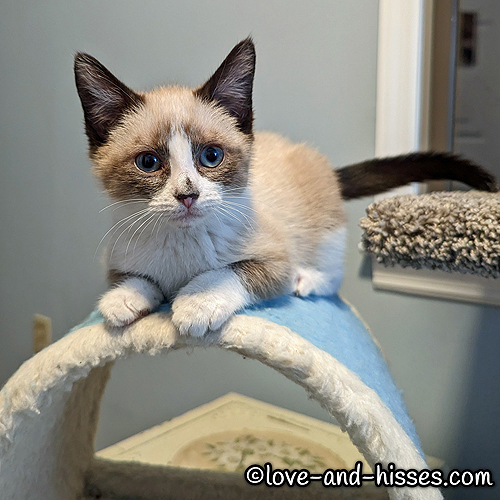 I was sitting at my computer and could feel someone looking at me, so I turned around to see this judgmental little face. (Linzer)

YouTube link
Yesterday I moved Linzer and Cinnaspin from the bathroom to my office upstairs. I left the door closed for a few hours so that Nacho and Francesca could sniff at them under the door (and the Cookie Girls could sniff back), and then when everyone had had naps, I opened the door. The first part of this video is from yesterday; the last part is from this morning. Nacho and Francesca are just SO OFFENDED by the existence of the Cookie Girls. The Cookie Girls are keeping their distance, but they’ve made a few visits into the foster room. 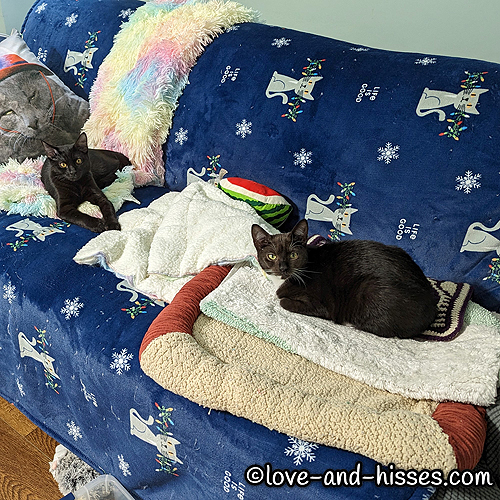